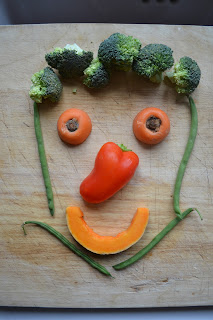 No one really likes to admit it but parenting is sneakily competitive. Listen in to the gabbled chatter on the playground before the bell goes and you will see what I mean. “Billy’s swimming is going great guns, so good in fact, that whispers are afoot that he could possibly enter for the country trials.” “Chloe has only been playing the clarinet for 6 months, yet there is no doubt that she will pass her Grade 4 by Easter.” And “Tommy’s grasp of trigonomics, latin and quantum mechanics has simply astounded everybody and just the other day MENSA was on the phone wanting to test his IQ, oh the tuition at the weekend has been soooo worth it.”

No doubt about it, extracurricular activity certainly reveals a lot about the drive and ambition of a parent, much to the chagrin of the poor four year old that has to live up to expectations beyond his or her control.

Personally, what with the age that the twins are at the moment, I am just happy that they are enjoying their first year at school, making good, gentle progress and finding their own way in the world through play. I certainly don’t want to be that pushy parent, proudly boasting premature achievement.

Except maybe when it comes to food.

Yes, perhaps I do get a bit overbearing and obsessive when it comes to filling their tiny little brains with information about food, particularly when it comes to vegetables. I am not talking 4AM starts here, where I could sit them behind small desks, bare feet on the cold kitchen floor; whilst I bark and point maniacally at Power point slide show about brassicas. No, that would be over the top and quite possibly wrong. But at any given opportunity, if I can enthuse and educate them about wholesome legumes and fruit, then I will do so.

A great starting place is the supermarket. Brightly lit and full of colour, the fresh produce aisles are an assault on the senses and brilliant for engaging the twins in an adverse show and tell session. You can while away a good thirty minutes or so, going on an educational tour, believe me. But you do have to be careful though as supermarket managers don’t take kindly to having Comice pears ripped out of plastic bags or Dutch tomatoes, however insipid, being returned to the box with indents from tiny fingers. 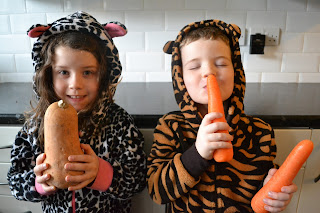 Of course, a safer, ethical and more conscientious bet would be to visit a farmer’s shop, where in general, vegetables and fruits lay freely and are used to being manhandled. It is here that you can also introduce a sense of seasonality and pass on the message that it doesn’t matter whether carrots are wonky or not. Try not to be too worthy though. I once confused the hell out of the kids trying to demonstrate that oranges are not the only fruit. And it’s understandable really, I mean what have Sanguinello’s got to do with Uncle Simon and Uncle Owen anyway?


Fortunately, we also have an allotment which is fantastic for the twins. Again, not only does it bolster the notion that different vegetables grow at different times of the year but it also highlights the beginning and the end; the circle of life. At the start of the season, seedlings undergo rigorous daily examination as both pairs of little eyes draw close to potting trays in the greenhouse, sometimes crossing with the effort. 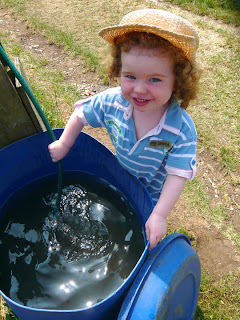 Then once the plants start to grow and get transplanted to the soil, the care and duty continues as the twins help to water them and hoe surrounding weeds. A young cabbage or a leek will occasionally be destroyed in the process but that’s just the way it goes. The summer blazes past, if we are lucky, which is not often; and then in late August/early September, the harvest arrives, where they get to reap the benefits of all their hard work. OK, I am painting a rose-tinted picture here; the twins don’t get that involved. They do get excited though, when helping to collect the fruits of our labour. But mostly they like to weave in and out of the plot, dancing menacingly through tall, thick stems of maize, like true Children of the Corn. 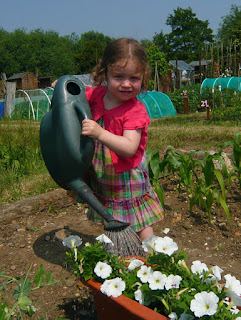 I suppose the main hub for the twins’ learning experience surrounding vegetables has to be the kitchen. Having prodded, squeezed and identified a variety of roots, leaves, bulbs and tubers with grubby digits and dirty fingernails, the proof comes in the preparation and the eating. With their help, we are still at the stage where baby courgettes and Swiss chard needs to be chopped up with scissors and as such, their ability to dice, julienne and brunoise is pretty rubbish. However, I look forward to the day when I can hand over a knife and teach them the ‘pinch’ and the ‘claw’. 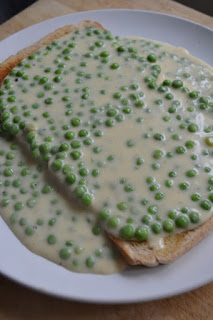 Most important of all though, is that the twins enjoy their vegetables and fruit. Children are notoriously fussy when it comes to the green stuff, yet thankfully our two are willing to give anything a go and like most, if not all vegetables. There have been some challenges but nothing that can’t be solved by some gentle coercion and imaginative thinking. I struggled for ages to convince them that peas weren’t frog spawn in disguise until I found a recipe called Cheesy Peas. The resulting dish is certainly paradoxical, insofar that it looks far worse than frog spawn. In fact, it looks like vomit. But my kids love cheese. And now they love peas. 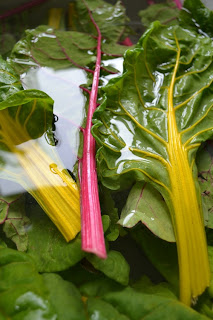 At the end of day, that has to be the ultimate goal really. For the time being, that they know, appreciate and love their food is good enough for me. Academic, cultural and sporting achievements can’t wait. I have to admit though, I was pretty chuffed when I sent them in with a kohlrabi the other day for show and tell.

Not one kid had a clue as to what it was. Not even teacher.

josordoni said…
I was looking a a picture of them you popped on FB the other day, and thought to myself, oh, the fabulous stories those two will have to put in their autobiographies when they are more famous in the food world than Nigel Slater and Anthony Bourdain put together...
14 March 2013 at 12:50