The trill barely finishes before the big sound comes. Doors swing open and corridors and stairwells suddenly become flushed with the clamour of footsteps, laughter, screams and shouts. A tidal wave of noise washes over the building like a tsunami before spilling and bursting through the exits, flooding the playground outside. Jimmy could remain inside until the rush subsides and trickles away but he knows there would be no point; no matter how long he held out, they would always be waiting.

Despite the stench, he sucks down deep and places a foot on the floor, wavering at first before setting the next one down. Silence falls upon the school like a stage curtain so when Jimmy opens the toilet door, a sharp creak echoes down the hall and stops a frightened secretary dead in her tracks. Jimmy can't bear to look her in the eye when she asks what he is still doing there, so he scurries for the daylight, like the little mouse he is.

Unaccustomed to the brightness, he stands still for a second or two and squints whilst pushing a greasy fringe away from his face. Scouring the empty concrete, striped with yellow, red and white lines, Jimmy looks up to the path ahead; lined with trees and bushes, leading out on the street. To the untrained eye, not a soul seems to be about. But Jimmy knows what lies ahead. He spots the smoke from a mile off and all the white trainers, dangling casually from a wall.

Walking forward, he feels a surge of bile rise up into his throat and his heart began to beat hard and fierce, almost as if it were to explode. But this time, Jimmy has decided things will be different. Carrying on, head light and spinning, quiet conversation comes into earshot and halts as soon as his arrival is noticed. The group of white trainers jumps onto the floor and edge towards him. Soon, a half-finished cigarette bounces off the rucksack that Jimmy carries as a shield.

A mass of sputum, hacked up, thick and yellow, lands near his foot but that wouldn't be the worst thing to happen. Familiar fists would soon descend, to hammer on his body, crouched and prone. There would be no rhyme nor reason, this collective had just simply decided that this was so. Pack mentality always throws moral obligation out of the window, especially when the subject is quiet and small. Besides, it makes them feel better, better than they could feel at home.

As always, there is a leader and the leader steps into Jimmy's shadow and mocks with the same self-satisfied smirk as always; sneering, goading, with his nose inches away. Jimmy pauses and then thrusts a hand into his rucksack, pulling out a triangular piece of flapjack that he bought at lunchtime in the canteen. As Jimmy raises it into the air, the older boys immediately burst out laughing, their faces stretching and contorting in fits of merriment and mirth.

Yet the moment that Jimmy slams the flapjack shard deep into his aggressor's neck, the mood soon changes and wide smiles turn into frames of bewilderment and disbelief. Further still, as he yanks the oat and raisin blade back out, sending an arc of blood spraying up into the the air, the boys crumble into cataclysms of horror and stagger back with a gasp. Their leader, stunned, eyes wide open, clutches his throat before falling backwards, spewing crimson bubbles from his mouth.

An uneasy pall descends as everyone watches the leader's body shake, gurgle and splutter and the viscous pool that surrounds his head which grows and grows. It is all over in about a minute and soon birdsong from the surrounding trees casts back a curious normalcy to proceedings; as if what just happened, didn't happen. The group of existing white trainers look up at the face of Jimmy, which has just the faintest smattering of red across his cheek. And then they look down. And then they run.

Because in Jimmy's other hand, there is a sharpened yum-yum. And he's had enough. 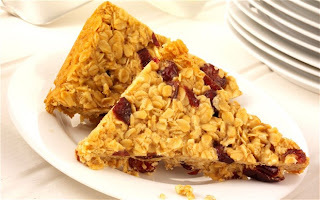 This story was inspired by recent flapjack revelations in the news. As someone else so eloquently put it, it's health and pastry gone mad.
Labels: fun writing