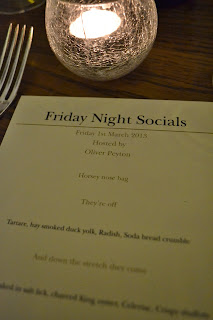 Trafalgar Square, late on a Friday night, is an interesting place to be. Buzzing with frenetic energy, the kind that arises when everyone is eager to throw off the shackles at the end of the working week, commuters and tourists alike tend to veer towards more buoyant and inebriated states. However, having dashed out straight from the office, sometimes getting fed is the last thing on people’s minds and last minute choices for eateries can be described as prosaic at best.

With that in mind, whilst walking past a certain fast food stall perched on the corner of the Strand just last week, I noticed a couple of suits getting stuck into a burger, one of whom was wearing a mustard coloured badge of honour on his lapel. And I did think about tapping him on the shoulder, to tell him that if he really did fancy some horse, then he should have popped up the road to the National Café. He could have tried cheval, pure and unadulterated in there. But after accessing his demeanour and peering into his Cookie Monster eyes, I decided against it.

It was a shame for him though because the horse meat menu served up at Oliver Peyton’s Friday Night Social was great fun and excellent value. When I heard that the restaurateur was planning an educational evening, to promote horse as a healthy, quality meat to eat; I booked a place for myself and my wife straight away. It had been a while since I last tried horse but initially, my wife wasn’t happy at all with the idea. Apparently fond of her equestrian past, she looked quite cross at the suggestion but after some coaxing and case study - “Hey, I’ve eaten horse a few times and look, I’m fine” – she frowned some more before finally relenting.

Whether or not the decision making process for the other 80 or so diners who turned up was quite so fraught, I am not sure. Actually I doubt it, because a lot of people were simply chomping at the bit to get stuck into Dobbin. The general mix, on our long table at least, was one of 50/50, comprising of connoisseurs and first timers and overall the atmosphere was one of carnivorous excitement. A friendly couple from South London, who were sat next to us, were particularly looking forward to trying out horse meat. As proponents of the Paleo Diet, they were very enthused at the prospect of discovering some different protein to gorge on and I admired them for that. And the nifty animal skins they wore, although my male counterpart had to leave his club at the front desk. 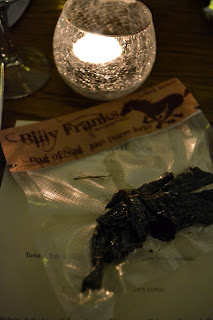 The menu and proceedings kicked off with a vac-packed horsey nose bag, comprising of horse jerky made by Billy Franks, an award winning jerky specialist from East London. And then via various horse racing puns, we were served up a handsome plate of Tartare, hay smoked duck yolk, radish and soda bread crumble. Sliced sirloin arrived at the table for mains, which had been baked in salt lick, served with charred King Oyster mushroom, Celeriac, Crispy Shallots and gravy. And we finished off with Caramelised Carrot Cake, Oat Crumble and Apple Granite for a very naughty, saccharine dessert. 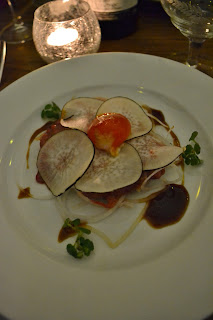 Personally, the standout dish was the tartare, which was quite different to versions I’ve eaten before as I am used to a more piquant, acidic sort of hit, rather than the soft savoury velvet that this one delivered. Paired with crunchy radish and a decadent, smokey yolk, the overall effort was gorgeous to eat. 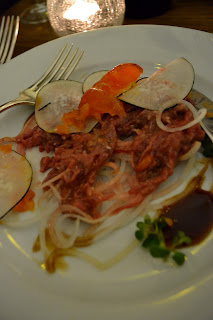 The knowingly clever carrot cake (I admit, the penny only dropped after I finished it) was also outstanding; ruinous for the teeth but probably not quite as bad a handful of sugar cubes. Billy’s jerky was pleasant and spicy and wolfed down in seconds so I suppose the only slight disappointment was the sirloin. Seared and served pink yet with hardly any trace of blood, the meat was tougher than I expected it to be but the other components on the plate matched up well. The vegetables were little stars in themselves, which unfortunately shouldn’t have been the point but still, the sirloin tasted good despite the chewiness. 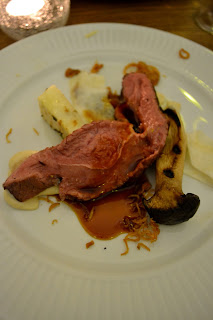 Despite that one gripe, it was a very enjoyable meal, with conversation and wine flowing throughout. The main crunch question of course is, does horse meat taste different? By and large, most of us decided that it was very similar, if not exactly the same as beef. Everyone except my wife, who declared that she could easily detect a difference. But then again, she has that telepathic resonance from her days of riding Sunflower. At a push and if I had to think really hard, I would agree in that horse meat had a touch of sweetness to it, rather than the iodine, earthiness of beef and that the texture was marginally different. Just marginally though. 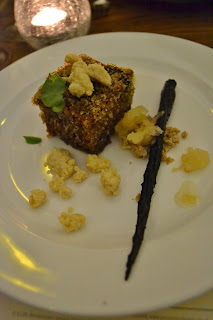 At the end of the night, I had a very quick chat with Oliver Peyton, asking him if the public will be seeing more horse on the menu in restaurants and he was in no doubt that this would be the case. “After all, 10 years ago, venison hardly appeared at all on a restaurant menu and now it’s everywhere,” he said. Although after saying that, he also believed that it won’t become quite so mainstream, not based on current prices and availability. Horse is bred for consumption in this country but at present, there are only two abattoirs in the country that will process and butcher it. Which I think pained Oliver somewhat, who prides himself on sourcing and buying ingredients within the UK. If it were more readily available, he would have no problems at all with serving more horse meat in his restaurants. 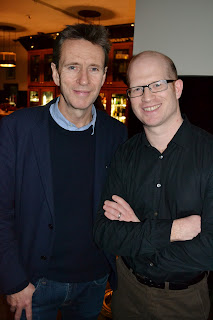 Which sort of reflects opinion on horse in the UK at moment. Talk to most people and most wouldn’t have a problem with eating horse meat at all. The overriding factor or drive behind the horsemageddon hysteria that is pervading throughout government, the food industry, the media and everyone’s minds that is that horse meat in our food chain was duplicitously hidden from view. If we were simply told from the beginning that we were eating horse meat, I am sure there wouldn’t be such a hoohah surrounding it. I also am sure that, if reliably informed, the two chaps on the corner of the Strand would still happily order their ‘burgers’ on a Friday night.

Though judging by the way they galloped off, scoffing into the night, I don’t think they’d give a monkeys either way. 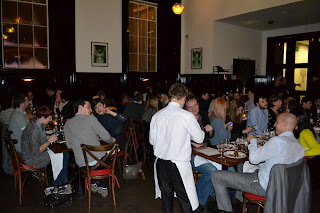 meemalee said…
When I cooked camel, it was best as a tartare, so I'm not surprised horse also fares well treated that way. Chewy beasts.