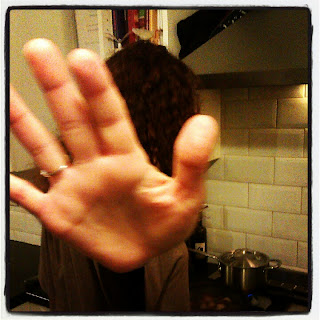 I am sure that my wife loves me dearly yet on occasion, I do get the impression that sometimes I annoy the hell out of her. Especially when she is in charge of cooking duties in the kitchen and I am simply the bystander. Like a hovering, buzzing fly, I am sure she finds me irritating and a source of unnecessary vexation but sometimes I can't help but be the pain in the proverbial backside. To be fair, I only ever want help. So why I often find myself on the receiving end of verbal abuse and under the threat of a very physical sort of danger is beyond me.

Take last night and that pan for instance. Did she really want to use that size pan for caramelising shallots? did she? And hmm, yeah OK, reducing balsamic vinegar to create a sticky glaze is a good idea but why not try the lovely sherry stuff we've got in the back of the cupboard. Look, it was just there. Not even opened. Yes, the red wine smelt fantastic but did she really have to use the expensive one we were drinking? I mean I did buy a bottle of cheap plonk, especially for the sauce after all. As for the stock, come on, there was some frozen lamb stock in the freezer, wouldn't have taken a second in the microwave to defrost but no, she had to use beef stock. By K-Noor, who apparently have the K-Noor how. Thyme! Fresh thyme would have been great in that sauce, why didn't she want to use the fresh thyme? I was standing there, by the door, with scissors in hand, all too eager to go out into the pitch-black and brave the freezing cold; just to collect some fresh thyme from the bottom of the garden. Have I mentioned fresh thyme yet? And I knew we didn't have any redcurrant jelly in the fridge, I just knew it. How she thought quince jelly was going to cut the mustard as a substitute is beyond me but she went ahead and used it; stirring into the sauce at the end, against all of my advice.

And what do I get in return? I get told to sit down and to shut up. I then get told that just because I blog about about food doesn't mean that I get the final say in matters. And just because I've got delusions of grandeur, thinking that I am some top Michelin starred chef or something, doesn't mean that everything I cook always comes out well either. I get told, no, bellowed at, asking why for instance, I never got round to writing up that lamb tongue in aspic, which, according to her, looked like dog food. I was also asked why I never shouted from the rooftops about my duck and juniper terrine either. Which, according to her, looked and smelt like dog shit. I then get told that if I ever stick my big, fat nose into her cooking again, when it's not wanted; then this pan, this large, heavy, oversized pan, that is apparently too big for shallots, is going to be thrown straight at my head.

So naturally, and from then on, I kept my mouth shut and subtly took some photos instead.

I did think that maybe making a sticky, reduced red wine and shallot sauce wasn't really necessary because the Swaledale lamb we had won from the East London Steak Company a couple of weeks ago and have been ploughing through since, tastes quite beautiful on its own. The depth of flavour is stunning and doesn't really need any adornment. But I kept quiet about that.

Still, as it turned out, the sauce was pretty amazing and a perfect accompaniment for the pink rump steaks we ate last night.

I kept quiet about that opinion too. 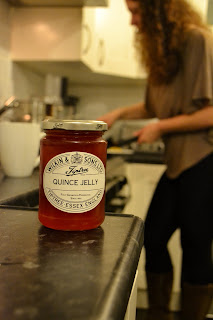 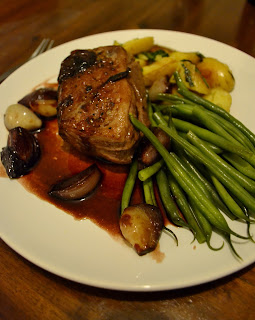 Lamb rump in a reduced red wine and shallot sauce 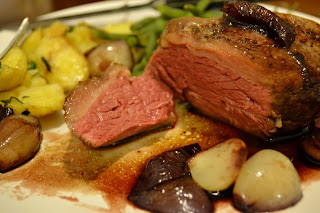 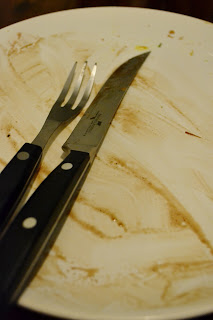 Unknown said…
The Viking very often tells me the reason he doesn't cook anymore is because its not worth the hassle and sucking in of breath when he reaches for what I consider the wrong ingredient.... They're all bloody idiots.
24 March 2013 at 09:36