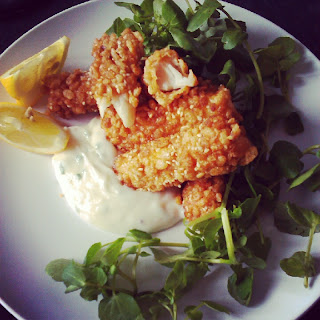 When it comes to the matter of breakfast cereal, I do find that my opinions become quite divided on the subject. Let's face it, a bowlful of light ineffectual processed grain, laced with 'vitamins', laden with sugar and sploshed with milk isn't really the best start to the day is it. And the fact that the creator or originator of cereal, now a multi-squillion pound industry, was a flatulant Seventh-day Aventist who enjoyed a yoghurt enema every now and then, also makes me very wary.

But when cereal is used in a different context, say as an ingredient within a dish, as a component for texture, I do sort of become more relaxed with the whole idea of cereal. Take chocolate cornflake nest cakes for instance. OK, not much healthier than the morning bowlful. In fact, quite frankly, they are the culinary equivalent of crack. But still, whoever drummed up the concept of pouring melted cocoa over orange flattened corn scabs and leave to set again is a genius. It was probably a kid. An evil genius wunderkind, set on world domination via mind control. I know this because whenever I make them or buy them, after taking the first bite, I soon fall into this frenzied, beleaguered state and lose all self-respect and control. The amount of times I have woken up naked, in some distant woodland copse with mouth and chin smeared in brown, fingernails caked and bits of cornflake stuck on my matted hairy chest is beyond me. Ah, such is the lycanthropic power of chocolate clusters.

However, when cereal is used as a witty take, to liven up a traditional recipe and to give a things a twist, well then I am up for that too. Like rice krispie fish fingers for instance. Recently I took part in an online cookalong with Marcello Tully, as part of Great British Chefs' recent campaign to get kids into the kitchen and cod, coated with puffed rice was on the menu. As cookalongs go, this was one was good fun, even though I had trouble keeping up with Marcello and burnt the first batch of fingers. The twins were involved you see and whilst I applaud the good intentions of this project, which is in association with Tesco Real Food, I long for the day when their nimble fingers can be put to finer use. Rather than have to deal with the very same fingers when they are coagulated with egg, flour and rice krispies.

A question I had for Marcello was went along the lines of "WHEN DO KIDS FINALLY GET TO GRIPS WITH COOKING??" and it was nice to see a wry smile appear on his face. The man, a father of two himself, obviously felt my pain. The cookalong was recorded and can be viewed here by the way, where you can see me and the kids scrambling along at bottom. Thank gawd, I muted the microphone on the laptop is all I can say.

As for the fish fingers themselves, when I made them a second time for lunch, they came out very well. Surprisingly so. Rice krispies are an excellent conduit for keeping fish nice and moist so it seems and the addition of the paprika to the flour added a lovely warm depth to the crunch of the coating. The mayonnaise I made was a bit on the flabby side, trying to keep up with a daughter pouring half a gallon of sunflower oil into a bowl was very tricky. I am amazed it didn't split.

In terms of endorsement for the recipe though, the final word has to go to my boy, Fin, who initially thought I was "Mad" to use rice krispies for fish fingers. After ploughing through 4 fat goujons at the dinner table, he wiped his mouth, put his hand on my shoulder and with a smile said that maybe I wasn't so mad after all.

Alex said…
'The amount of times I have woken up naked, in some distant woodland copse with mouth and chin smeared in brown...'

This totally validates my fear of unknown brown. Waking up to find oneself smeared in brown is never going to end well!
26 April 2013 at 22:21

Unknown said…
What a brilliant idea. Would have never thought of using Rice Crispies in lieu of panko crumbs. Thank you for such a great trick !
13 May 2013 at 00:02