Sous-vide Pig Cheeks (After A Fashion) 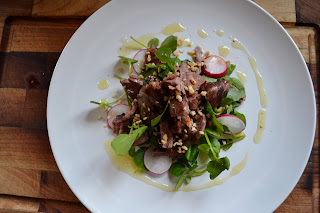 So, I spent some time tinkering in the kitchen the other day. Or maybe tinkling is the operative world; considering that a lot of that time was spent pouring minuscule amounts of cold water into a crock pot, in a vain effort to keep conditions at an optimum 80 degrees centigrade. Actually, it was a whole day of tinkling. And beeping. And tinkling. And beeping and tickling and beeping and tinkling. A sort of nightmarish groundhog day, governed with severity by a screeching temperature probe and coupled with an agitated, pressing concern to keep visiting the toilet. It wasn't nice at all really.

But what was I up to anyway? Well, I keep hearing about the magic of a cooking technique called 'sous-vide', a prissy system that looks simple.... no wait, perhaps I've got that the wrong way round.... whatever, I have heard exponents of cooking 'under vacuum' say that this is wonderful, wonderful method and have been eager to give the process a go.

To give a brief overview of sous-vide, it is a method of cooking food that has been vacuum packed and sealed in a plastic bag, which is then poached in a water bath, that is kept at a constant, exact temperature, for an infinite, inordinate amount of time, to ensure even cooking throughout, thus guaranteeing a certain degree of juiciness, especially with meat. This is because at lower temperatures, proteins within food cannot cellurisify and burst through their permeable membrane nucleus; in fact, after 48 hours gelatins begin to hydrolate at various physical states, both within the biosphere and at quantum levels and as the collagen breaks down and depolymerizatizeses, sealed lumps of meat actually become self-basting and enriched with moisture from their very own gloop. This is the science*.

However, I was just interested in trying to stop my pig cheeks from shrinking. I love tender pig cheeks but I hate the way they seem to shrink into small porky nuggets after braising for a few hours. I want to keep them as fat and plump as possible. So to my enquiring, perceptive mind, sous-vide seemed like a way to go. Keep 'em trapped in stasis, with just a few aromatics, well where are those juices going to go, eh? Nowhere, that's where. Except I don't have a professional sous-vide machine. No PR company has been trusting enough to send me one (wouldn't mind, it's not like they fetch much on eBay anyway). I do however have a crock pot, the aforementioned temperature probe and a vac pac machine, which seals, after a fashion. So I set up a little experiment, just to see how it worked out. 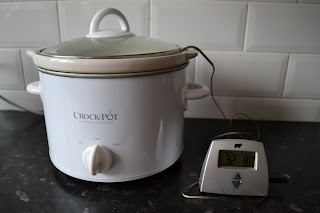 Roughly taking the lead from this recipe from the British Larder, I neatly trimmed up four cheeks, bought from Waitrose for just one English pound and stuffed them in a pouch with a bay leaf, some garlic, some rosemary, some olive oil and, get this, a teaspoon of marmalade. The pouch was then duly sealed, sort of, and I waited for the water in the crock pot to reach 80 degrees and then plopped the bag in for its maiden flight. Because there was some air in the pouch, the bag floated back up to the top so I had to weigh it down with a ramekin but no matter, it still felt like I was doing something revolutionary. And then I spent the day going about my business around the house, completing chores, playing with the kids etc etc. Only having to return to the crock pot, say every 10 to 20 minutes, whenever the alarm when off at 81 degrees, to top up with cold water, to stop it getting too hot.

And after those 8 long, torturous, continence testing hours, I fished the cheeks back out, cut the bag and plucked the oval-shaped beauties out. There had been some shrinkage with some 'matter' left floating around in the bag, which I can only presume was liquefied fibroblast (which of course is derived from mesenchyme) but I was quite happy with the end result. The cheeks were extremely soft and held together well, even after a quick flash in the pan for a bit o' Maillard reaction. They were screaming out for some mash as an accompaniment but I went in for some seasonal ponce instead, making a salad of watercress, radish and hazelnuts with a lemon vinaigrette. The sweetness of the flaked meat stood out beautifully against the hot leaves and pink roots, like swine amongst peppery pearls. Although the sauce was a touch too tart for this dish, so I would have to rethink that. But overall, not a bad effort (he says, patting all self-congratulatory like on the back).

Would I go down the whole rigmarole of tinkling into my crock pot again like a veritable Manneken Pis though? Probably not but I did like having a tinker with the whole process so I would certainly consider hacking my crock pot and using different meats and flavour combinations in future. If I do, you'll be sure that I will write another informative blog post on the doing science aspect of it all.

So watch out Harold McGee, there's a new playa in town and he sort of knows his stuff. After a fashion.

*Perhaps as a footnote, I should add that I gleaned a lot of this scientific information about the chemical processes of sous-vide after browsing through Modernist Cuisine in Waterstones. Given my propensity for absorbing information quickly, I read, well scanned, the whole tome in under five minutes. So sure, some of the intellectual jargon may be a bit off but there is definitely a good section which covers the whole method. I am sure of that. 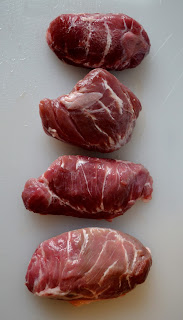 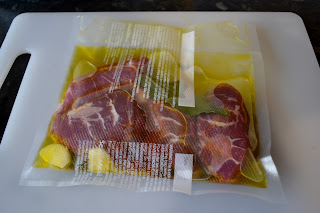 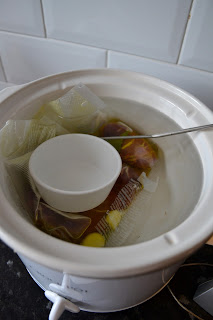 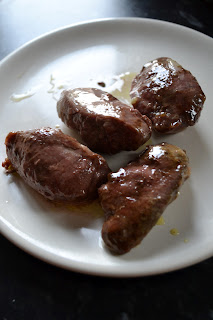 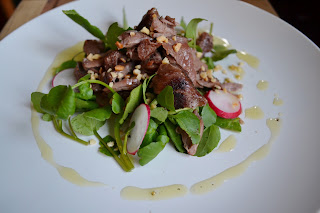 The Brussels Cook(er) said…
I salute you for doing this! I too love pork cheeks but have to admit I only ever treat them as (delicious) stewing meat pieces/pulled pork - but they look absolutely stunning in/with this salad!
16 April 2013 at 15:02

Kavey said…
Very tempted to call you Poncy Cheeks from now on, seems to fit so well. On balance, however, you shall always remain Daisy to me.
17 April 2013 at 18:50