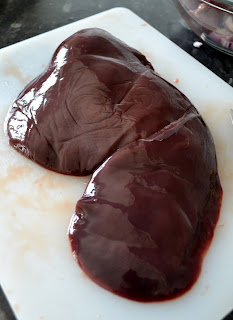 I have been playing around a lot with liver lately. Although I don't mean 'play' in the conventional child-like sense of the word. I haven't been holding tea parties in the garden, passing around plastic cups and saucers to teddy bears, robots and glistening lumps of ruby red organs. No, I haven't been doing anything like that. That would be odd. Besides, I can never get Mr Liver to sit up straight in his chair; he's forever slumping forward onto his cucumber sandwiches and always seems to remain characterless, despite my best efforts with a pair of sunglasses and a pair of lips from Mr Potato Head.

I suppose what I mean is that I have been experimenting with cooking liver or rather, chopped liver. Now usually chopped liver gets a bad press. And I have to say that visually, as an ingredient and as per the famous idiom, it can often come off as a second rate proposal. When you glance down upon it in the butchers, sat quivering in silver trays, a morass of alien protein associated with purging and detoxifying, I'd say that it's quite normal to pause, sweat and fumble with your pearls before pointing at some plain old mince. But you would be missing a trick because it is cheap, healthy and when cooked the right way, damn tasty.

The inspiration for this latest episode of playing comes from our local ocakbasi and firm favourite, the Turkish Mangal in Hornchurch. As a hot starter, they serve up a cracking little plate of offal called arnavut cigeri or 'Albanian Liver' and I've always wanted to replicate it at home. Especially since the ingredients needed for this dish seem to be quite straight forward. I have never communicated directly with the chef and owner of the local mangal to find this out mind. The discourse between us consists of winks, grunts and handshakes as I am often too scared to talk to him. Although I suspect the slap on my back as I walk out the door could be interpreted as "You know what Danny, I do speak English you know."

No matter. Using my highly sophisticated palate and vivid sense of recollection, I'd say all you need is a dash of cumin, some chilli, crushed garlic, sliced red onion and a generous sprinkling of chopped parsley to create this exquisite yet frugal treat. Which is exactly what I used when trying it out for the first time over the Bank Holiday weekend; cooking directly on coals on the bbq, to add some authenticity. But it wasn't quite right. It was good but it didn't quite hit the mark.

So I tried it out again yesterday, with some tinkering in the herb cupboard and this version came out a lot better having upped the ante with the spices, adding a little bit of plain flour and some lemon juice at the end. The important part, or at least in my opinion, is to fry the liver over a high heat, so that each cube of meat forms some crust over the surface. Of course, you really don't want to cook liver for too long either, unless you like the texture of that pink rubber at the end of a HB pencil. You know, like the ones you used to chew on in school, back in the olden days. So quick and hard is the motto here.

Served up in a bowl to share, along with some other meze before diving into some homemade kebabs as part of an Ottoman feast is probably the best option. However, I pimped things up by squeezing a fistful of liver into some pitta with extra onion and squeaky, muthafricken halloumi. It was gorgeous. So gorgeous in fact, that I have a good mind to pop up to the mangal tonight and tell my friend all about it.

"Shut up Danny, that's nothing like the recipe," he'll probably say.

But I won't care, I'll just be grateful for the conversation.

Chopped Liver with Cumin, Garlic, Chilli, Parsley - serves 2/4 as a meze starter, depending on how greedy you are

500gms of lambs liver, chopped into cubes (you can do this yourself or get your butcher to do it, if feeling squeamish)

Half a red onion, finely chopped

2 cloves of garlic, finely chopped and crushed to a paste with salt

1 tbsp of cumin seeds, toasted in a pan and ground

Combine the liver, flour, cumin, chilli, sumac, oregano and oil by mixing in a bowl and season generously with salt and pepper. Leave to marinate in the fridge for two hours. Take out and bring to room temperature. Heat a frying pan or wok over a high heat and then fry the bejesus out of the liver for about 2-3 minutes, stirring quickly but don't worry if it starts to catch slightly, you want some crusty, crispy bits. Take off heat, add the parsley and lemon, stri in and serve immediately. 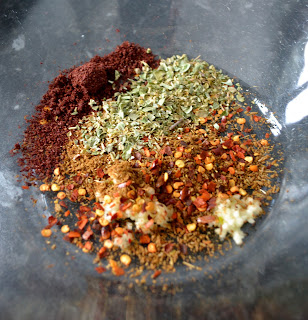 Spices and herbs and things 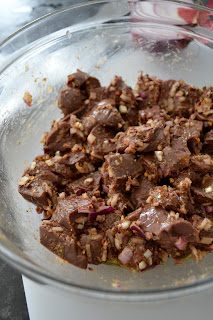 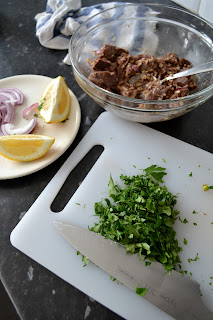 Bring all the components together 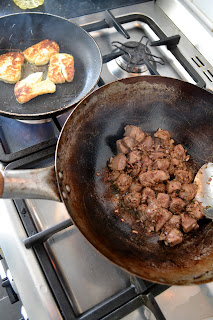 Frying the muthafricken bejesus out of everthing 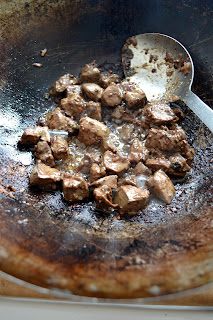 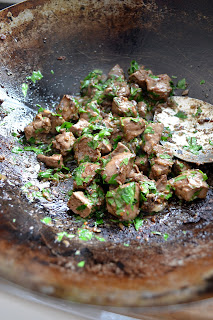 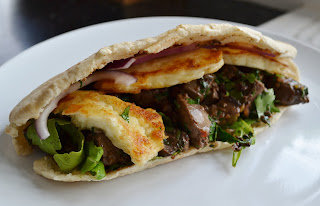 Lisa Cookwitch said…
Danny, that looks ace. I shall have to have a go!

Unknown said…
Mmmmm, that looks lush. I am a massive offal wuss though, but I did order devilled lamb kidneys the other day to try and be grown up, and I loved them! So I think I will be brave and try this, thanks!
10 May 2013 at 09:38

Anonymous said…
I will need to remember that variation. Interesting combination with the halloumi.
I cooked lamb sweetbreads today, also very good.
11 May 2013 at 17:50