Hanging out with Chef Dominic Chapman

There is an old showbiz adage that advises "Never work with children or animals." And in the context of a live broadcast, this is undeniably true. The presenter, in whatever situation, can be doing a sterling job on camera but should a child ever wander into view with a finger up their nose or if a randy old dog should decide to mount another in the background of a shot, then any sense of gravitas will go flying out of the window. In such circumstances, all the best a presenter can do is to smile, carry on and maintain some sense of decorum and credibility whilst chaos reigns supreme around them.

And this is sort of how it felt when I participated in another Google + Hangout recently, this time with Dominic Chapman, as part of Great British Chefs Cooking with Kids campaign. Dominic, who is head chef at The Royal Oak in Maidenhead, was demonstrating his recipe for Spaghetti and Meatballs with mini garlic bites with the help of his son Daniel. And I was following proceedings and cooking along with help from my son Finlay at home. And somehow, quite miraculously, we both managed to pull off producing a decent plate of food. I am talking about Dominic and myself here by the way and the other parents who took part. I would say that the best our children probably achieved was making a whole mountain of mess. But it was reassuring that I am not alone and that even Michelin chefs struggle working with their mini sous chefs.

Watching the video above will give you more of a sense of how things went. Whilst it's hardly laugh-a-long 'You've Been Framed' material, I think it captures at times, the tricky balance of working with children in the kitchen and trying to teach them something. Mischief and boredom are only just around the corner, especially at 36 minutes into the video, when a cheeky boy decides to headbutts his father. But you will notice that I dealt with that with utmost professionalism.

As for the meatballs and spaghetti, well they were pretty spot on. Especially with the addition of crunchy garlic croutons and a rich tomato sauce laden with hidden, healthy vegetables, all gobbled down for lunch. But personally, what lent weight to the dish, was seeing Dominic cook in his own home environment. Watching him juggle with the prep, juggle with frying, chopping, boiling, cleaning as he went along and juggling with his kids at the same time, made his recipe all the more trustworthy. 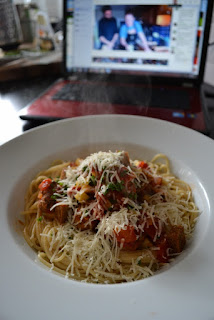