Paella, In A Tin, From Grey's Fine Foods 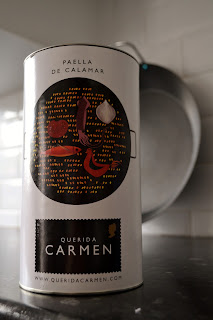 Can anything good ever come from a can? Or rather, a tin? And I am talking about a full meal here. Can you rustle up something for the table that is adequate, satisfying and tasty; using foodstuffs which have been preserved, pasteurised and processed to within a inch of their lives and sealed within a cylindrical metal tomb? Food that could, if necessary, be left for years and years and years to gather dust on shelves before having to be frantically relied upon in the event of say, nuclear Armageddon or a zombie holocaust? Can it be done?

On face value, the answer would have to be no, particularly if you consider whole meals in cans. Offerings such as 'Crosse and Blackwells All Day Breakfast', 'Stagg Classic Chilli Con Carne' and 'Wrestlers Hamburgers in Onion Gravy' all smack of desperation and lack of thought, resigned to that green period when you first left home. When I was at uni, a friend of mine lived on nothing but Fray Bentos Pies and survived quite well on its enigmatic blend of unknown meat, rubber pastry and brown slop. Was it fulfilling and healthy though? Well no, it probably wasn't and I doubt that he got many vitamins from the endless slices of Battenberg cake he used to scoff either but hey, he was happy. Still, whenever I think of tinned food, I can't help think of it being a second-best option.

I shouldn't really because there are lots of tins that I reach for when shopping in the supermarket. Tomatoes, chickpeas, sweetcorn, lentils and beans of all shapes and sizes, all curry favour for a position in my cupboard. Tinned fish is also a good standby, especially anchovies to pep up certain dishes and pilchards to smash on toast with a fork, grill and then sprinkle liberally with malt vinegar. New potatoes are pretty good too and I adore rice pudding, eaten straight from the can. And fruit, all kinds of fruits, bathed in sweet syrup are fantastic. Actually, the size of a tinned fruit aisle in your average store fascinates me, why is it so big and with so much variety? I suppose, what with the spiralling ageing population in this country, that the pursuit of prunes and solace of comfort is big industry. Would make sense to stick up a rack of 'Preparation H' right at the end of the shelves too really. But maybe not next to the gooseberries.

As usual, I am digressing and need to get back to the point of putting across my own feelings about tinned foods. In a nutshell, as a method for storing singular ingredients (or rice pudding), I have no qualms. Yet try to serve me up a ready meal in a can and my face will blanch. So when I received a box of Spanish goodies from Grey's Fine Foods, a boutique importer and distributor of exclusive er Spanish goodies, my eyes initially lit up at the contents within. And then my fair eyebrows crossed downwards in vexation. Because amongst the jamon, chorizo and manchego was a cardboard tube that contained a tin of pre-cooked seafood paella and some bomba rice. 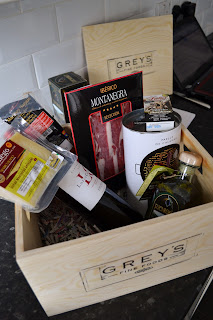 Now, I am no expert but in opinion, paella should not come ready made. It may be a simple peasant dish but to my mind, a great deal of romanticism is attached to it. Taking time to carefully prepare ingredients, scratched and gathered from land or sea, all of which need to be cooked under the stars whilst imbued by a soft Iberian breeze, is to me the whole essence of paella. Whenever I make it at home, normally in the garden upon roaring wheelbarrow, I always make sure I have a bottle of Viña Sol to hand and Gypsy Kings playing at full blast in the background to capture this spirit. So no, paella should not come in tins. Even if it was produced by Querida Carmen, whoever they are. However, after some bleating on Twitter, someone in the know said that it was very good stuff. It was, in fact "High class convenience food." 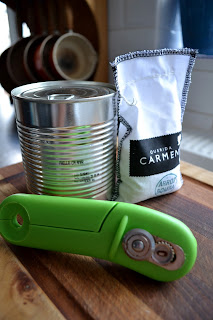 So I tried it out last night and was impressed with the result. Very impressed. The first clue that it was going to be good become apparent after peeling back the lid (no cheap green tin opener required here). The aroma blossoming out of the tin was quite intense and heady, a scarlet shellfish stock that nipped at the nose with a fearsome yet handsome pair of claws. 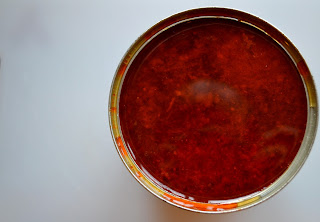 The scent then continued to fill and envelope the kitchen as I poured it into a saucepan and began to heat it on the hob. All in accordance to instructions of bringing the stock up to a 'soft boilings' on the side of the tin. 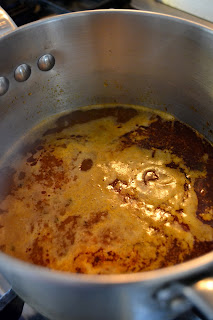 After shaking the bomba rice into the pot from its little white sack, it was a case of waiting for 20 minutes whilst the whole thing gently plopped and plurked away, with an occasional 'stirrings' every now and then. The stirrings in the stomach however, soon became a problem so I ate all the Montanegra Iberico ham whilst waiting. Which then became a bigger problem. But that is a story for another time. 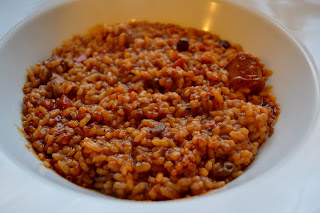 The final, effortless result was stunning. I initially thought that the portion size was a touch on the meagre side but given the deep, richness of the stock, there was more than enough paella to go around. Using a description of "Wow, this has a true taste of the sea" would be lazy and bland so perhaps I should try and embellish by saying "Wow, how many frigging crabs were sacrificed to make this muthafarking amazing stock?" Perhaps that would do it more justice. Because it really did taste like the sea. As for the other elements, well the rice still had some nice chalky bite and a touch of 'socarrat', the scratchy, slightly burnt bits from the bottom (you do have to burn the paella just a little bit you know). The tiny morsels of sausage and rib lent some light meaty touches but were so scant that they didn't overpower everything else. And the calamari was just beautifully tender. So just get that straight in your head for second. This is a paella, straight out of a tin, that tastes bloomin' gorgeous. Who would have thought eh?

Of course, at £12.50 a tin, I suppose you really should expect as much. But for something of this quality, I would say that the price is a small drop in the ocean. And doesn't even cost half as much as eating a load of nutty, succulent jamon before your wife gets home. 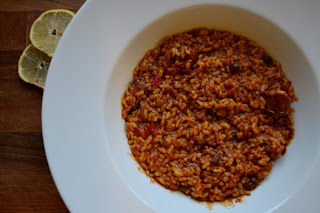 Thanks go to Grey's Fine Foods for sending me some samples to sample.
Labels: paella review

Alicia Foodycat said…
I've had good canned cassoulet and fabada but this is a surprise.
1 May 2013 at 16:58