Some wittering on eggs, poached or fried? 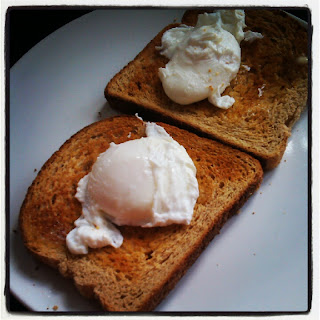 Fried eggs are currently off the menu for breakfast at home. Which is a damn shame because sweet Lord, I loves a fried egg. After all, what can beat the sensation of deftly cracking an oeuf on the side of the pan and extravagantly sliding it into hot, spitting fat and flinging the broken shells behind your back. Certainly beats any other snap, crackle and pop. And that's just for starters.

The instant transformation from glaze to white as the albumen spreads is quite a joy to watch; a mishaped puddle that begins to pulsate, bubble and jump about like flat scorched feet on boiling sand. Sometimes, scalding oil will splash up from the paddling pool and blister a thick thumb; the shock of which is quickly soothed by sucking baby-like, before covering with a tea towel.

A fish slice appears and gently nudges the edges, testing the teflon and whoosh, off it slides to the other side. Tipping back into the center, keen eyes pay attention on the deep yellow; the gooey bullseye, which must not, on any account, become solid. The second the last vestiges of transparent jelly disappear from around the yolk, it is then time to whip the fried egg out. For fear of any crusty, crispy, rebellious border. For that would be sacrileage and so must be policed with impunity.

Once done, it is simply a case of plopping onto some buttered toast, butter that has melted and seeped downwards into fine Chorleywood crumb. A liberal shake of Lea & Perrins with a healthy dose of salt and pepper and bang, you are done. Well, nearly. The whole thing needs to be smashed into oblivion with a fork before diving headfirst in.

But like I said, lovely fried eggs are off the menu in an effort to counter to an increasing, bulging tyre that is filling out my midrift, like Saturn's ring. Only more bulbous. So I have reverted to poaching eggs instead, which involves so it seems a entirely different alchemy altogether. When I asked Twitter what the best methods were, the reaction exploded all over my monitor, like a rotten egg hurled from a distance.

The biggest bone of contention was whether to vinegar the water or not. Some people were still in favour of the method, citing science and mother-knows best. But essentially, you only need to acidify H2O if your eggs are old. If you have fresh eggs, you don't have to worry. I find the whole fresh egg mantra quite funny actually. You see it everywhere in recipes, books and on the tellybox.

"Make sure you use the freshest eggs most humanly possible, known to mankind. As fresh as water sprung from a mountain spring. As fresh as the wind that roars the Great Steppes. Fresher than a pair new Y-fronts, straight out of a pack of three, from the shelf at M&S."

Fresh eggs. Well, we've been getting fresh eggs for ages haven't we. As in the words of one curmudgeon on Twitter who said (and I paraphrase here) - "You can bitch all you like about supermarkets but the one decent thing that they have done with the supply line is to make sure that the public get fresh eggs."

I think you can get fresher though. If say we were to keep chickens in the garden, a quick scoop up first thing in the morning and then a crack and plonk into a simmering pan. Now that would be fresh. You could go even further and try gently squeezing Henrietta over the same pan before she gets her morning egg-blutions out of the way.

However, that would be strange and most likely, most terrifying for the poor hen. Her nightmares that one day, she will be destined for the pot, would all come true in one singular, horrifying, existential moment. And I wouldn't want to wish that on any poor bird.

But after a few years, when she becomes straggly and tough and past her best? 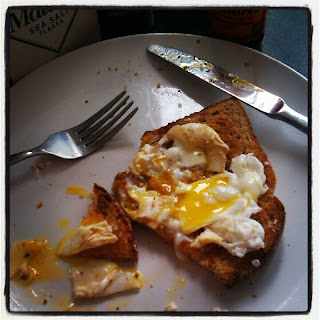 I have the same quandary about eggs on toast. I regularly have a double fried egg butty...yet feel naughty about it's fried-ness. But really - in a good non-stick pan you only need to use a tsp or two of sunflower oil, which can't be THAT bad can it? I flick flack between poached and boiled depending on my mood. Oh, and I do scoop the eggs from underneath my own fair chickens for the purpose, which does make for a most delicious and virtuous lunch.

Anonymous said…
So what *is* the best method to poach an egg? Last time I tried to poach eggs for my significant other, I wound up nearly crying at a messy eh-SPLOSION of watery egg white and rogue yolk. It was horrible.

After I got over my well of emotions, we had fried eggs. But I've even bought those damn poach pods with not very good success... my eggs wind up overcooked in them when I follow the instructions.

Unknown said…
Danny, you NEVER fail to make me laugh out loud. I almost spat hot tea all over my desk reading this post. Brilliant!
24 May 2013 at 15:06

Alicia Foodycat said…
One of the few lasting memories of my HSC English exams was the passage in Catch 22 about fresh eggs "snapping exotically in pools of fresh butter". Best food writing ever.

Anyhoo, I boil my eggs as my less-lardy option because I am incapable of poaching them and I don't care to waste enough eggs to learn.
24 May 2013 at 15:22

Spangle said…
I have to wait until I am at home, by myself, before reading your blog because giggling and chuckling away to myself at work, or anywhere else in public, makes people look at me with a strange expression.
And please don't take this the wrong way, but I now I have visions of you gently squeezing Henrietta, looking anxiously at the feathered behind when nothing initially appears while the pan of water bubbles away to itself until there is a sudden "plop", a satisfied cluck and you staring in horror at a pan of gently bubbling water and chicken poo.Thank you for brightening my day!:D
24 May 2013 at 18:58

Food Urchin said…
Things we make - I know what you mean, a fried egg in a non-stick pan need not be unhealthy.......unless you use a block of lard

tastyfever.com -do you remember those cheap tin pans with four black cups to poach eggs in? Rubbish weren't they

Nicole - Apologies for the computer but glad you had a chuckle

Foodycat - Now that is a good passage, damn that Joseph Heller

John (Jensenbull) - yep I used to do that, patiently make my way, cutting and eating the white before popping the yolk in my mouth.

youngandfoodish said…
Allow me to direct your attention to Jennifer Trainer Thompson's The Fresh Egg Cookbook: From Chicken to Kitchen.

You seem to be on the same wavelength as Jennifer, even if she's not half as amusing as you.