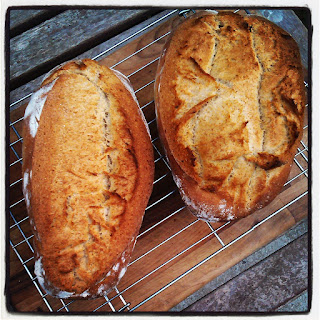 When it comes to baking bread, I must admit that I have become rather lazy. I used to be quite into it, particularly with regards to sourdough. I used to have a starter called Veronica and at first, the relationship was quite intense, enthusiastic and bubbly; as you might expect from an early courtship. Many happy days were spent simply mulling and lounging around the kitchen in the warm, waiting for the slow rise under cotton sheets in feverish expectation of a tangy hit later in the day. Her crisp crust was quite exquisite too. Then sadly, other commitments got in the way. Soon, the thrill was gone, my eyes wavered and began to look around in other directions. We tried counselling a few times via the unnecessary application of a teaspoon and a hefty dose of flour and water which sparked a revival each time but it was always short lived. She was too needy and I didn't have the time to give.

Veronica left me. Blackened, musty and deep in shame. The ignominy of watching her seep slowly, downwards through the plughole is something that will probably stay with me forever but you have to move on, don't you. Just like Adele did, in that album of hers.

At the risk of sparking and evoking some damning ire, I have to say that it was all Dan Lepard's fault. He turned my head with his 'no-knead' technique which has enabled me to slam out loaves of bread with little care or thought; bang, just like that.

"What's that you say my darling? We have nothing to breakfast on tomorrow, the shops have shut and the children will starve in the morning? Have no fear, we still have time, for we have flour, water, salt and yeast! Too long? Mwahahahaha! Watch my precious, watch what I can create with a vigorous ten second pumping using the merest of my hands! Switch that oven on!"

Yes, if there is one thing that reduces me to ranting, raving, delusional demi-god, it is the no-knead technique (which OK, does need a teenie bit of kneading) and as such, this is singularly the only type of bread that I bake at home now. However, when I consider the abundant variety of recipes and methods that exist for this fundamental staple, I do realise that I am selling myself short. So recently, I decided to dip my toe back into the leavening pool and this week I tried out something that was a bit more involved and time consuming than usual. Which was Richard Bertinet's Somerset cider bread.

Now, in terms of technique, Bertinet's approach to kneading is totally different to what I've become used to, insofar that it is a lot more energetic. Actually, when I first bought his book Dough, some time ago now, I recall watching the accompanying DVD and wondering if I had paid for some bizarre food-led exercise video. I had my feet up on the sofa, I had a beer in my hand and I distinctly remember thinking "Sod that for a game of soldiers."

Basically, his guiding principle is to scoop up the dough (which at first resembles flabby porridge) with both hands and you raise it, stretch it, flip it and slap it back down on a flourless surface, all in one fluid motion. And you repeat this action over and over until the dough becomes silky and smooth. This video will give you more of an idea but essentially what he is trying to encourage is that you get as much air into the dough as possible. So yes, it's all very aerobic and looks like it all amounts to hard work, inducing beady foreheads and sweaty bum cracks and whatnot. However, once you get the hang of it, the method is relatively easy. And watching the mix transform from a glutinous mess into something that is quite pliable, buoyant and alive is quite magical, therapeutic even.

I had forgotten all about this part of making bread and this recipe, which calls for a ferment to deepen the flavour of the bread, certainly slows things down a bit and imbues a sense of steady, calm to proceedings. It has definitely kick started an old enthusiasm for baking. For in the fridge, there is now a pot of Veronica Mark II, skimmed off from a little bit of ferment left at the end. So we could be looking at a new dawn of experimenting with friendly bacteria (fingers crossed).

The only real dangerous part of this re-ignited interest is the potential for new levels of gluttony. Once baked, the loaves were probably only allowed about 10 minutes of cooling before I smote one in half with a serrated knife and slathered it with a pack of butter. It was delicious but if I keep this up, then the conquences for my health could be serious.

Perhaps Richard Bertinet could bring out a proper exercise video. Rather than use kettle bells or fancy pieces of elastic, perhaps the slapping and stretching of huge lumps of dough could form the basis for a funky and original calisthenic routine. It's just an idea.

Somerset Cider Bread
(the measurements for this recipe have been adjusted from the book, to make two loaves instead of four, because four would be ridiculous) 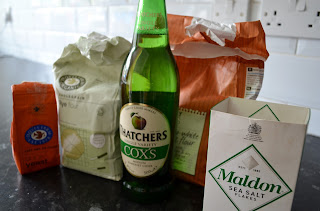 First make your ferment by mixing the initial ingredients together using the slap and tickle method as seen in the video and then leave covered in a floured bowl, in a quiet corner of the kitchen for about 6 hours. 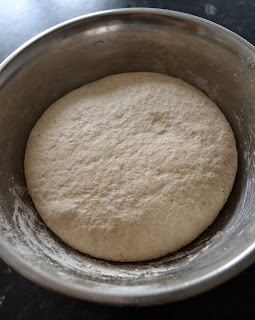 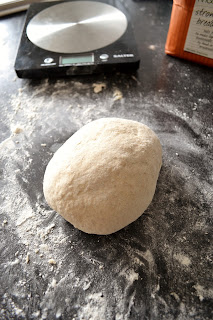 .
Then using a scraper, scoop out the ferment from it's container into another bowl, all in one piece, and add the rest of the ingredients and knead using the slap and tickle method again (refer to video). Shape the dough into a ball, put into a lightly floured bowl, cover with a tea towel and rest for 45 minutes. 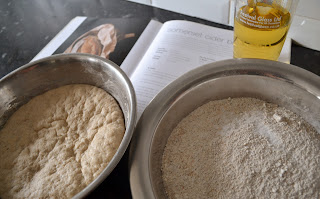 Turn the dough out onto a lightly floured surface and reshape into a ball, place it back into the bowl, cover with a tea towel and leave to rest for 45 minutes.

Turn the dough out onto your lightly floured work surface and divide into two equal pieces. Lightly flour another tea towel. Mould the balls of dough into loaves and place them onto the tea towel, making a fold in the fabric between them to stop them touching when they rise. Cover with a tea towel and leave to prove for 1 and half hours, or until they have nearly doubled in volume.

Turn the loaves over, place on a peel or flat-edged baking tray and make on cut lengthways along the top with a razor blade or sharp knife. Mist the inside of your preheated oven with a water spray and then slide the loaves onto the baking stone or tray. Bake for 10 minutes, then turn down the heat to 200C, and bake for about 35 minutes until well coloured. The loaves should sound hollow when tapped on the base with your finger.

Remove and cool on a wire rack. 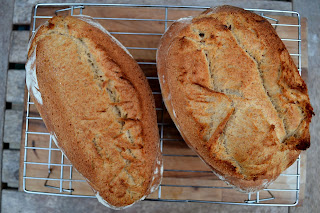 They should look like this. Rustic, yet still very handsome 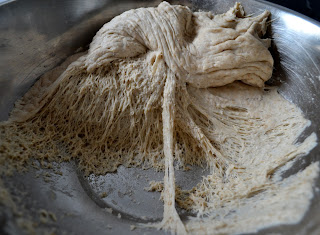 Alicia Foodycat said…
"watch what I can create with a vigorous ten second pumping using the merest of my hands" - bet it isn't the first time you've said that to some poor woman ;)
21 June 2013 at 14:28

kerstin said…
ah didn't see that you had posted this until I'd posted this something about no knead breads today.
I'm doing a combination mongrel, no knead and sourdough.
Best of both worlds I reckon
28 June 2013 at 11:16

Anonymous said…
Hi there! I'm at work surfing around your blog from my
new iphone 3gs! Just wanted to say I love reading your blog and look forward to all your posts!
Carry on the excellent work!
4 May 2018 at 10:18