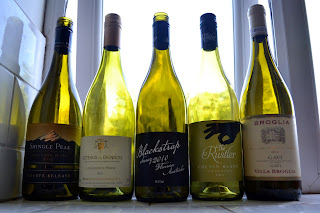 Cricket has never really been much of a passion of mine and there is a good reason why. Some time ago now, when I was a boy, I went on a trip of a lifetime to Australia to visit family who ensconced down under way back in the 1960's. It would be fitting to squeeze in at this point, all the usual banter about them being criminals, forced to flee the country etc etc, because they were. Well, Great Nanny Clark was. She was a colossal tea-leaf in fact. She had an evil, lustful eye for the pick 'n' mix in Woolworths whenever she came home and had been known to smuggle cutlery out of Claridges in her brassiere on one or two occasions. Harmless, lovable rogues, that's all they were really though and we travelled thousands of miles to see them.

It was a great holiday, the memories and experience of which still echo in my mind but there was a moment that came towards the end that scarred me forever. I was in the garden of an uncle's house trying to play cricket with my second cousin called Leslie, who was Australian by birth and mad on the sport. I say trying because I was a typical pasty uncoordinated ginga from the UK with little experience of the hallowed game. Whereas handsome and tanned Leslie was that all singing, all dancing kid from the Gold Coast who was good at everything and as a result, a bit of a spoilt brat.

The goading didn't bother me at first but after a while, it began to intensify and become more personal. I think it's called 'sledging'. So, thoroughly fed up of having to scamper everywhere to retrieve a red leather ball to the sound of mocks and jeers, I decided to give Leslie a taste of his own medicine. Focusing and concentrating on three singular, wonky sticks, poking up out of the ground, I threw the ball with all my might and for the first time that day, it whizzed past his bat and smashed them to pieces.

"OWZAT YOU TWAT!" I screamed, lungs bursting with joy and I started to whip my feet around the lawn in the manner of Michael Jackson and his famous moonwalk. However, I was so caught up in celebration that I failed to notice a crimson faced Leslie who was running up towards me, simultaneously crying and swinging a bat above his head. Being the accurate sportsman that he was (and still is, I should imagine) Leslie planted a hefty piece of willow firmly into my mouth. That he didn't knock any teeth out was a miracle but a canine did pierce and protrude out my bottom lip and blood flowed freely after that, as well as more tears.

The situation was soon placated by a wet sponge, a fistful of Aussie dollars and the reassurance that Leslie would remain locked inside his room until he calmed down. By all accounts, the little cherub was still sore and sensitive after seeing his heroes fall. If David Gower and his cohorts hadn't secured a comprehensive 3-1 series win that summer, therefore recovering the Ashes, he might have been more forgiving. At least that was the suggestion at the time but I have to say, after that episode, cricket sort of lost its allure. I went on to play rugby union instead, which is a much more civilised affair.

Speaking of civilised affairs though, despite having an underdeveloped understanding of what actually happens on a cricket pitch, I rather like the idea of watching as a spectator. Any sport that breaks for lunch and tea sounds good to me but the fact that cricket fans are actively encouraged to bring along a picnic with alcoholic refreshments to serve themselves throughout the day, sounds even better. So when Laithwaite's Wines approached me with the offer of curating a celebratory hamper to enjoy at the 4th Investec Ashes Test v Australia at Durham ICG on August 10th, I leapt at the chance.

The main deal on my part is suggest food to match wines selected by Mr Gower or Lubo, as he is affectionately and inexplicably known. Curating is an interesting word actually, as it sort of implies a considered approach or degree of artistry. I'll be honest and say that whilst testing the wines that arrived a couple of weeks ago, it was considered but I employed an artistry of a different kind. Piss artistry. But nevertheless, I do sincerely believe that these pairings would keep most members of the Barmy Army happy. This is what I came up with:

Blackstrap Shiraz 2010 - Packed with pepper and jammy fruit with plenty of length (as they say), I was tempted to make the suggestion of packing a disposable bbq into the hamper so that the wine could be enjoyed with a freshly grilled rump steak such as 60 day Longhorn from The Ginger Pig but the Durham ICG probably wouldn't be too best pleased with that idea. Sandwiches made from sourdough bread and packed with cold beef, cooked rare, a small bunch of watercress and a smidgen of horseradish would go down well though.

Villa Broglia Gavi 2012 - I got into an argument with Mrs FU over this one as she asserted that this was a "drinking" wine, which of course sounds absurd because all wines are drinking wines. What she meant was that this Gavi, which is quite fruity yet retains a dry crisp edge, is an Italian wine to be enjoyed on its own. I begged to differ and shoved a plate of marinated anchovies under her nose to try with her next glass. She acquiesced that boquerones were indeed a nice pairing and then shoved me out of the way to finish the bottle in the sunshine, in the garden.

Grande Réserve de Gassac Rouge 2012 - This rich Cabernet Sauvignon came on a journey with us all the way down to Devon, belying the theory that wines don't travel well because this red was delicious and full of bramble berries. After taking the children on their first camping trip, which lasted just two days, we settled into a little family hotel for the night and got stuck into some goodies we bought from a deli outside Barnstaple. Two choices of cheese were made, a nutty Devon Oke Cheddar and a Devon Blue and it was the subtle blue veined cheese that scored top marks so that would have to go in the hamper.

The Rustler Chenin Blanc 2012 - Dry, crisp and grassy with lots of herbal notes, this wine left us stumped (ha!) for a period and very nearly fell back into that "drinking" wine catagory but then Mrs FU came up with idea of serving something quite creamy and decadent, so that the wine would not only pair up but could also cut through the flavours. In the past we've made Salad Olivieh, a Persian salad that can be tweaked here and there but generally consists of diced potatoes, peas, mayonnaise, finely chopped gherkins and grated eggs. I made a variation at the weekend with shredded chicken and chopped tarragon and it complimented the Chenin Blanc perfectly. And vice

So that's my four pairings. The proof of the pudding will be how they all fare together along with the wines, under the heat of the midday sun (or rain) in Durham in under a couple of weeks time and I aim to report back on that. But if England continue on their current trend, then I am sure everything will work out just fine.

I am hopeful in fact that Mr Gower might grace us with his presence as I'd love to find out what he thinks of my selection of food. And I also want to collar him for what my spoilt git of a (second) cousin did to me, way back in 1985.