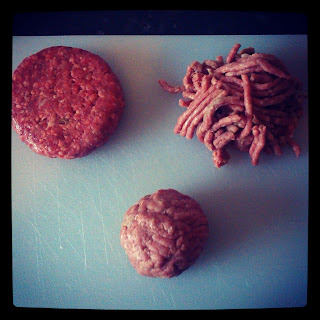 It's a long shot but I reckon the obsession with burgers that seems to be all pervading at the moment, began as far back as 20 years ago. Sure, burgers have been around for a long time. The brothers McDonald arguably kick-started the beef patty in bun revolution way back in the late 1940's but this current trend has its roots firmly based in the 1990's. Of that I am sure. And it all comes down to one magical moment on celluloid when Samuel L. Jackson, who plays hit man Jules, tries some of his intended victim's Big Kahuna burger in the film Pulp Fiction. A shot focuses on the burger in question for just a split second. Sat all squat in its wrapper with bun squashed and cracked, molten cheese and tomato sauce oozing out of the side, it is the epitome of a dirty, greasy burger. Jackson picks it up and takes a huge bite, his eyes widen and he sums up quite succinctly via a laconic drawl, his own personal opinion.
"Mmm mmm, that is a tasty burger."

That was the birth of cool for the humble burger right there. Up until that point, I don't think we gave two flying monkeys about burgers. Before that moment, burgers were simply a thing to eat, to scoff happily and cheaply off Formica tables; in pubs, restaurants and on late night trains, with no care or attention of thought. Then Jules came along, resplendent in black suit and 'Soul-Glo" wig, like a badass muddyfunkster and he made them all trendy and sexy. Which is what you would expect from Samuel L. Jackson anyway..........

OK, it is a long shot. Especially since all the bearded, bespectacled kids who queued up for two hours to get a slice of Americana at Shake Shack and Five Guys recently, probably weren't even born in 1994 when the film was released. I am grasping at straws and theorizing wildly here. I suppose what I am just trying to do is figure out why burgers are so damn popular at the moment.

What has intrigued me even more however is the business of 'smashing' burgers, a process that involves rolling up beef mince into meatballs and thwacking them once they are on the hotplate and one that is closely associated with the aforementioned Shake Shack. For some aficionados, this is the best way to seal in flavour and to create an all important crust.

Yet after making some enquiries on Twitter with regards to the science behind it, there was a bit of an outcry. Namely from food writer Tim Haywood, who claimed the practice drove out all meat's inherent juice and, in his own words, made him weep bitter tears.

A simpler way, he suggested, was to fling a handful of mince, seasoned with salt, straight onto a hotplate and then fashion it loosely into a burger with a slice. You then flip the evolving burger over, give the surrounding surface a quick squirt of water and then cover the meat with a wok to trap the ensuing steam.

This sounded like a novel idea, so last night I tried out both methods, all in the name of research. Along with a regular burger bought from a posh supermarket, just to make sure. Yes, that's three burgers in total but if you don't exercise strict and thorough perimeters with these sorts of experiments, the results can sometimes be inconclusive (ahem). 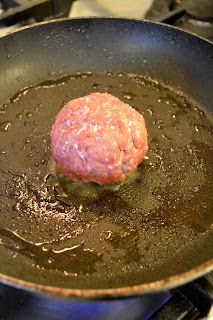 So this course of action, as far as I can make out from information gleaned from the internet, takes pretty much a 'does what it says on the tin' approach. In the absence of a hotplate (I don't own one) I heated up a frying pan to a high temperature, plonked a round meatball seasoned with salt squarely in the middle and then I hit it. With a heavy potato ricer because I wanted to be sure. The important part apparently, is to do this within a 30 second time frame of the meat touching the pan. Leave it longer and the juice will come flying out. 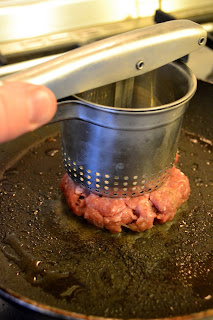 The mince spread-eagled pleasantly and uniformly, which was a surprise. Part of the smash method is that the burger often forms an irregular shape but my one complied to an aesthetic that wouldn't look out of place in IKEA. I flipped it over and let it cook for a couple more minutes before throwing a slice of Monterey Jack on top to melt. And then I placed it in a regular seeded bun and chowed down. I probably should have left it to grill a touch more as it was quite rare in the middle but overall, it tasted extremely pleasant. Crisp on the outside. Juicy on the inside. Brilliant. 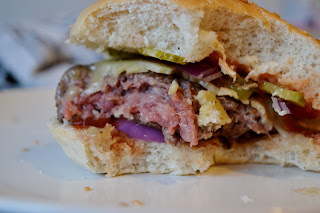 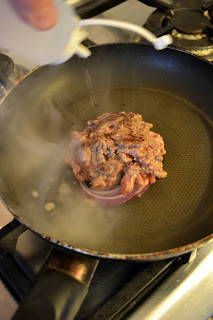 The notion of simply taking a fistful of mince, again seasoned with salt and slinging it into a pan at first did seem like I was taking a neolithic guide to cooking. I may "Ug," belch and expel wind during most hours of the day but when I am behind the stove, I do like to exude a slight degree of finesse and decorum. However, the surprising thing about Tim Hayward's method was that it all worked very quickly and easily. The burger that formed from my frantic shaping and scraping with a fish slice didn't meet your usual standard visually but hey, what are burgers at the end of the day? They are lumps of meat. 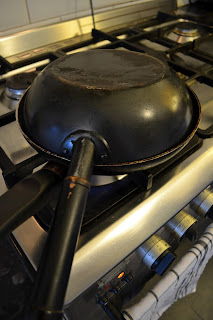 The real fun part came from squirting water into the pan and covering with a wok and then standing back to listen to the sizzle for a couple of minutes. I should add that I used Aberdeen Angus mince that was 20% fat, as per Tim's instruction. I then lifted the wok up, gave it another flip, added the cheese and off it went into another seeded bun. Again, the burger tasted fantastic. Although I have to say, the amount of juice that flew out did catch me by surprise and Mr Haywood now owes me a new shirt but still, a lovely tasting burger. 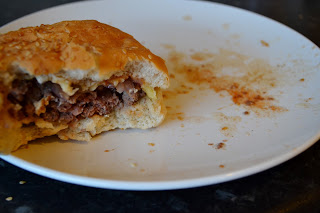 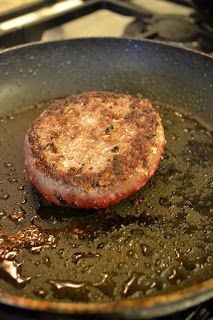 Bought from the butcher's counter, this burger on first impressions was wieldy, dense, heavy and compact and I did wonder how it would stack up against the previous efforts. It definitely needed longer in the pan and some squirty-wok action, which I was getting all trigger happy with but the end result was good. It could have done with some more seasoning but then again I think I went a bit cock-a-hoop with the previous burgers so my taste buds were probably out of tune. Or should that be in tune? Whatever, ultimately it was still a very decent and delicious burger that was juicy and beefy and gulped down with relish. So well done Waitrose. 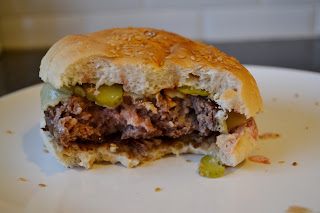 A final analysis of what I have just written about all three burgers will naturally steer you to the fact that I am greedy so and so. A veritable Mr Creosote in fact and you would be right to assume that. I need to sort myself out really but I am also pedantically trying to make a point here. To my mind, a burger is what it is. Of course, there are lots of examples of bad burgers out there. Just go to Upton Park on a Saturday afternoon when the football season starts and try an infamous 'Dogburger' outside The Boleyn Tavern. That is a very, very bad burger that may well put you in hospital. That's if a West Ham fan doesn't first. But apply any modicum of care and attention towards a burger, the quality of the meat, how you cook it etc, well what can go wrong?

Hands up, I have yet to go down the Shake Shack or Five Guys to sample their wares but I bet you any money that the people who snaked in a line for hours on end, walked away afterwards and uttered “"Mmm mmm, that is a tasty burger." Just like Jules did, before he coolly blew his quarry away.


I put the emphasis on the word ‘cool’ there by the way.
Labels: beef burger writing

Unknown said…
i just don't get it... I mean, I love a burger but I think the burger revolution started when the negative spin on McDonald's started, again in the 90's... it meant that people who knew better than to go buy a big mac or whopper could still get what they wanted but from somewhere 'cool'... plus, as a nation we are still OBSESSED with the USA which fucks me off... i'd much rather have a haddock and chips any day...

... oh and by the way my office is opposite Five Guys and they do NOT look like nice burgers at all, greasy and very smelly... and the queues are made up of tourists... stinky, greasy tourists...

Unknown said…
Nothing like a good burger, but I think people have been going a bit mental about them recently, I wouldn't queue up for hours for one, that's for sure! Got the rage at a local pub the other day when they refused to give me a medium burger, they 'HAVE' to cook it well done. Which is bollocks. Boo to them.
9 August 2013 at 13:21