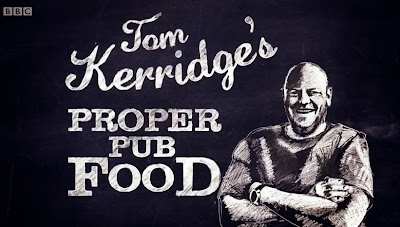 This post was first published on Great British Chefs blog.

It sort of saddens me to acknowledge this but I remember a time when pubs weren’t particularly synonymous with food. Pubs that I used to frequent in my youth (or yoof, as I like to say) were places to carouse, cavort and exercise your jaw whilst depleting grey matter on chemical ‘Export strength’ lager. They weren’t really places to go to eat. If you did ever become peckish, sustenance usually came in the form of a packet of pork scratchings, tossed casually across the bar. Or, if you were feeling brave or drunk enough, there was the option of buying from the glass cabinet of doom; which usually contained a single, flaccid pasty that had been kept warm and alive by a single light bulb. For about 5 weeks.

I like to feel that I have grown up now and it certainly feels like pubs have grown up too. Fostered by the gastro pub revolution, declining wet sales and an emphasis on family dining, going to your local for something to eat rather than drink is very much the norm these days. And if you find a convivial boozer that goes just that little bit further with their menu, well personally I often find that to be the better option than going to a stuffy, formal restaurant. A couple of weeks ago, I sat down in a country pub and ordered skate wing with brown butter and capers which is a fairly accomplished dish. Simple yes but so easy to get wrong.  In my case it was lovely and the interesting point is that more and more publicans and chefs are starting to push the boundaries, blurring the lines between fine dining and traditional pub grub. 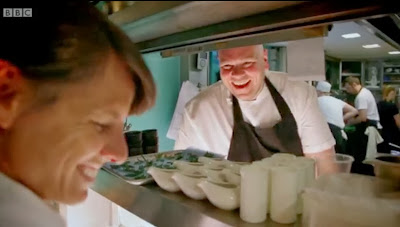 One pub in that regard that is going beyond the pale and hitting the lofty heights is of course The Hand and Flowers, the only pub in the UK with two Michelin stars.  And steering that ship is Tom Kerridge, the chef’s chef from the West Country. If there was ever an ebullient beacon for raising the game in pubs across the land it would be this guy. And after watching his new cookery show ‘Proper Pub Food’ - which aired on BBC2 last week - it is quite easy to see why the Beeb commissioned the series. Because the big man has got big love for food. 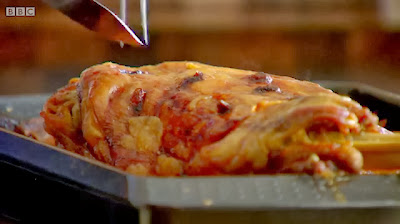 Kicking off with a remit of presenting pub classics that are simple yet full of strong flavours, Tom hit the sweet spot straight away with his slow cooked lamb and pommes boulangere, or Baker’s potatoes. Through puncturing the shoulder of lamb with whole cloves of garlic to layering slices of onion, thyme and spuds to pouring wibbly-wobbly stock all over the top, the premise looked great from the off. His suggestion of going for a long, long walk whilst it cooked was well advised as I can imagine the temptation to sneak a mouthful as smells envelope the kitchen would surely be too great. The reward for patience, so it seems, is fantastically succulent meat and crisp, amber, slivers of spuds. I physically dribbled when he served it up. 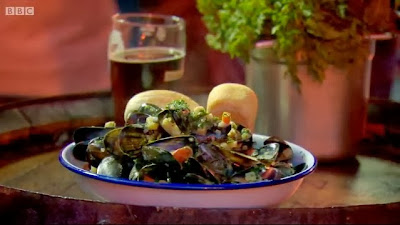 A visit to a local brewery came next, with a short overview of the beer they brewed, showing off a summer beer and a dark porter. Being a stout man myself, in the conventional sense, I would happy drink and cook with both. But Tom decided that the darker, richer beer would be great to use in an alternative version of moules marinière. The fact that he was cooking it outside at a BBQ event whilst it precipitated down from a great height probably also influenced his decision. Still the people that queued up, all curiously named ‘Chief’, looked very happy indeed. Apart from one hubby who made his wife fetch his food and was embarrassed for being ever so shy. 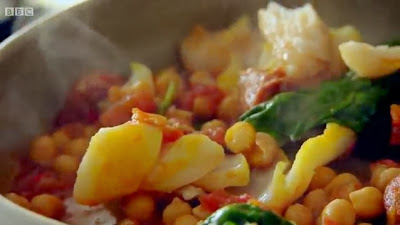 Back in the kitchen and in keeping with the one pot theme, Tom then showed us how to rustle up a chorizo and pollock stew. After finely chopping some onions, resulting in some on-screen weeping, he also showed us a tender side too. “Real don’t cry or eat quiche. I like quiche,” he uttered, almost whispering. By doing so Tom sort of accidently opened up at that point and revealed an inner part of his soul. As if he had been picked on in the past for his passion of egg based pastry tarts. Which made me feel quite indignant and righteous as I can’t stand quiche bullies. Luckily, the focus was quickly brought back to a warm, fragrant looking bowl of meat, fish and pulses with green spinach added in for extra healthy measure. And all was well again. 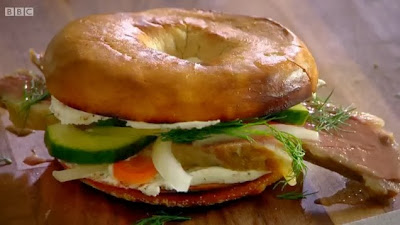 After that, Tom took us on a stroll down to Maltby Street market, the proper food lover’s proper food market, where everyone proclaimed to be noshers. Or in other words, they were fond of mountains of salt beef and pastrami, the greedy little beggars. The sandwiches from Monty’s Deli did look very good but I did like Tom’s twist back in the kitchen regarding pickling vegetables. I do love a pickle and pickle regularly at home but always end up in a malty sweaty mess after eating them so I think I will go with his recommendation of mellower white wine vinegar in future. Instead of using Sarsons own.

For the climax, Tom ended the show ended with plum fool shenanigans from gas canisters and a nifty trick when making custard. The biggest threat with custard is that it can turn into scrambled eggs in the blink of an eye. So Tom’s suggestion to pour the thickened sauce over clean freezer blocks to rapidly cool things down was inspired. This pudding was evidently inspired by Angel Delight, that cheap, after school treat that keeps the kids up way past their bedtime. And judging by the way the adults were whooping and laughing around the table, you’d be forgiven to think that they had more than their fair share of E numbers.

Which brings me to perhaps the only bugbear I have regarding Tom Kerridge’s ‘Proper Pub Food’. As a presenter and advocator of good, simple cooking, he does a fantastic job. Tom is a joy to watch in fact. But I did find the cookery show/lifestyle clichés a little bit irritating, which I suspect is more down to direction, rather than Tom himself. He is obviously a regular bloke (and this show was geared towards blokes) so it would have been good to have some more realistic touches, dotted about the show. For instance, that he mixed milk and cream in a nice pewter jug before pouring it in a pan annoyed the hell out of me. Why create the extra washing up Tom? Why not sling it all in the pan straight away? Because the food stylist said so?

Perhaps I am being picky though. Perhaps that is the proper way to do things. After all, if anyone knows how to do proper pub food, it’s going to be Tom Kerridge.
Labels: Great British Chefs telly

Unknown said…
I watched this on iplayer on my phone on the commute to work today. Normally I dribble on the shoulder next to me because I'm snoozing, but this time it was all that LUSH food. I agree with you about the pretty extra props etc but never mind,the food was so good!! Now watch the sales of those squirty cream things rocket!
2 October 2013 at 13:47

Anonymous said…
Loving this show, attempted his sticky toffee pudding, minus the rum and banana, and it was awesome. Tonight I rustled up his pollock with chickpea stew, again amazing, can't wait to try some of the other recipes. Has anyone else tried any? Only moan about the show is the amount of times the lovely Tom says "Lush" even if it may be justified!
30 October 2013 at 23:15