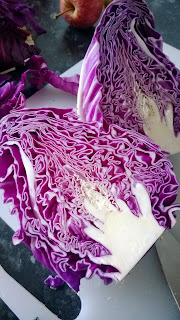 We made the sad decision to call time on the allotment this weekend and it wasn't one that was taken lightly. In part, I wish the call had come down to a calamitous event or some unseemly argument. It would have been far better to report that a plague of blackrot had taken my beloved spuds for the third season running and that was the final frigging straw. Or better still, to weave a tale of hoe-waving and fisticuffs over encroaching boundaries and raspberry thievery would have been at least an entertaining end to proceedings. But alas the only enemy in this story is time.

Murmurs of dissent began echoing around my head last year, as well as rueful glances from my dear ol' Dad who shares the growing and digging duties with me. Back in October, we agreed that if we could made a good stab at things for the coming season then the plot would be worth keeping but if not, then it would be our last. And at the start of April, we set off at great guns, along with help from my brother-in-law. In the spring sunshine, we toiled and turned the soil with great aplomb, tidying up the paths and edges and trimming back our fruit bushes. Shirts were slung aside as the sweat poured off our backs and if you were to picture the scene, there's no doubt that for just a second or two, you might think you had landed slap bang in a Coke advert. Before grimacing at the reality of three grimy, beer-bellied men puffing and panting with forks and shovels.

We gamely invested in chicken wire and even though we were told on numerous occasions that the gauge was far too big to protect our vegetables, we still to build cages to protect our brassicas and beans. I tell you, the times I could have gladly told my fellow, older plot holders to stick their advice up their jackies regarding that chicken wire. Even though they were probably right. Anyway, as usual, seeds and seedlings went into the ground, canes were assembled and erected hastily, the rhubarb got a decent dumping of manure and there was a hint of a plan that we might, just might get a shed for the plot. Finally a place to securely store tools, to keep beer cool and to perhaps surreptitiously take a leak in a bucket. Pissing in the nettles at the back was always fraught with danger.

All we could hope for after most of the work was done was that the summer was good, not like the continual down-pouring of 2012 which curiously started when the water companies announced hosepipe bans. And that we could keep up the momentum of frequent visits to water the plants and deal with pugnacious weeds. Conversely, it was the combination of weather, decisions by Essex and Suffolk Water and the prevelent, creeping horror of bindweed wot eventually done us in M'lud.

One of the biggest challenges this season was going to be using the new cistern system that was installed at the allotment, which replaced old standpipes and thus banished the use of hoses. Water is a precious commodity and didn't we soon know it. Spending an hour alone traipsing to and fro to a tank to fill up watering cans is a worthy exercise in both senses but it soon lost its lustre. The distance wasn't far but it was enough and on the way back to our plot, as precious drops spilled to the ground, I would scream out in frustration and then look up at the baking hot sun and scream some more. Largely because I am a ginger and those rays aren't good for the skin. So keeping our precious darlings watered soon became more than a chore.

Then there were the weeds. Now some principled folk who have grand ideas about the marvels of permaculture may be gently tutting at this point, arguing that there is an easier way. That if we could just only grasp some ideas and approach our plot from a different viewpoint, let nature do her thing and try to foster an ecological equilibrium, a few weeds needn't become a problem. In fact, they should be encouraged. Well you try telling that to a committee that staples urgent notes on the main that ALL plots owners are responsible for keeping everything tidy, for fear of not winning 'Best Plot in the Borough' for the third year running. And I am sure that bindweed has no place on this Earth anyway, choking the hell out of everything else on it's path to ultimate domination. It should be destroyed yet it truly is a fierce-some foe and the battle we've had with the bastard stuff has been unrelenting and constant.

The thrill started to wane around mid-August. Juggling work commitments with child-care during the holidays was tough going and whilst it's healthy and fun to have children run around the allotment when they are happy to help out for the first 10 minutes. However, their attention spans soon lead to running riot. Long weekdays would end in exhaustion and weekends became filled up as fast as we could pin stuff on the board. Conversations on the phone with my Dad started to end with - "Have you been down the plot lately?" - and I would simply mumble incoherently before saying goodbye. There just seemed to be no time left to do anything, let alone walk 10 minutes down the road to do a bit. Any bit. And so I like I said, we agreed that it was best to give it up. We've harvested everything that was still alive and I've popped the key to Norfolk Road allotments in the post.

Reading back on this rather introspective blog post, I am wary of the sense of melancholy that it exudes. Looking back at the words, it feels like I am making excuses when actually I just feel quite sad about it all really. It almost feels like we've failed in some way. But, as always, there is a light at the end of the tunnel as I haven't lost the growing bug just yet. Plans are afoot to turn more of the garden over to vegetables and fruit, as we have always grown stuff on the patio. If I can't make time to nip out the back door to indulge in some green fingering every now and then all really will be lost. I have already started collecting huge tubs and troughs to fill with dirt. I even found some railway sleepers, dumped in the field outback which will be great for making raised beds. I nearly gave myself a hernia lifting them though. So the future is bright and orange and green and red and quite possibly purple. Maybe speckled too, as I have always fancied growing borlotti beans.

I might not be able to call myself an allotmenteer anymore but I am sure I will come up with suitable replacement in due course.

Homesteader? That's the term isn't it?

PS The red cabbage photos aren't incidental by the way. We dined on the last of the allotment veg last night. With sausages. Which isn't a bad send off. 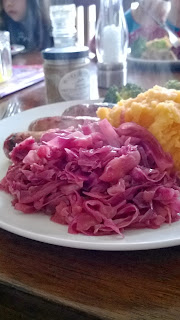 Sad to hear but hey, there is a big bright side. You ran an allotment for 3 years, no small achievement. I have a garden and have only managed to allow some pre planted mint to resurrect itself every spring. And, without the allotment, there would have been no Where's My Pork Chop. And the world would have been sadder for it.

Food Urchin said…
Niamh - Cheers Niamh, had it a bit longer than that but you are right, there would have been no WMPC and that would have been a crying shame. Especially for my stomach.
8 October 2013 at 17:32

clairetweet said…
I can understand you turning in your wellies. It's not easy keeping a plot going...and mine is only a few steps away in the garden. I too start out with great intentions but lose the will later in the season when the creatures and weeds take over.

When the kids are older maybe you'll have another crack at the gardening stuff. You can't do everything all at once! A few herbs and a pot or two of veg at the back door will still be a joy...and more than most people manage.
17 October 2013 at 10:06