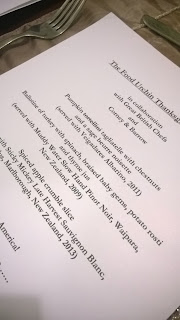 Have you ever made tortellini? You know, those navel shaped, lightly stuffed, round parcels of pasta? They are like ravioli. Ravioli that come with just little bit of extra inner turmoil, a touch of teenage angst. Anyway, if you have made them before, you will know that the hassle is worth it. Actually, once you've got the knack, they are quite easy to make. Because all you need to do is to roll your dough out, using a pasta machine or a rolling pin. You then lay the strip of dough, springy and elastic, along a clean, lightly floured surface. You dot your chosen filling at intervals towards the bottom of the strip and then you fold the pasta over and then you cut it out with.......

No wait, you actually cut the strips of pasta into squares first and then you put your filling in the middle and then you fold the square into a triangle like a wonton and then you press out the air and seal and then wrap......

Let's look at the Internet, let's see how they do it on the Internet....... See Giorgio Locatelli can do it. It's easy and I have done this before........ I have time, I have lots of time. People will be here in about 2 hours. I have 2 hours and people will be here and I have yet to cook the ballotine of turkey or make my rosti. I haven't even started on the red wine sauce yet and I am trying to make tortellini. Simple, sodding, tortellini. It's easy, I have done this before, I know I have and look.......look, it keeps squishing out all over the place. My hands are trembling......... WHY? WHY AM I DOING THIS? WHO CAME UP WITH THE IDEA OF MAKING TORTELLINI? THIS IS ALL S**T! GOD, I HATE MAKING PASTA!!!

*cue sounds of smashing and crashing*

Yes, preparations for a dinner party went slightly awry a couple of weeks ago and the rambling monologue above should give you some insight as to how I dealt with the situation. The plan was to cook up an alternative Thanksgiving meal for myself and some special guests, working in conjunction with Great British Chefs and Corney & Barrow, matching their recipes with their wine. And by and by, the meal was a success. A golden rule I have though is to always keep things simple for dinner parties and perhaps if I had plumped for the option of pumpkin soup rather than pumpkin tortellini, then perhaps prepping during day wouldn't have been quite so stressful. But you live and learn and I have decided that from now on if I am ever going to make tortellini again, I am going to take things slowly and make them by dulcet candlelight, with a glass of red wine, when I have all the time in the world. Or I might just go to the shops to buy them instead.

However, like I said, the evening was still great fun and it was wonderful to have some fellow Essex bloggers, namely Big Spud and Bistro Becs, come over to my house to eat and drink and to shoot the breeze with on a school night. Big Spud Gary even gave an excellent rendition of the Oath of Allegiance. This was supposedly to be a Thanksgiving meal after all. Although I do feel that the theme was lost on us all after a few cheeky glasses of vimto. Still, seeing as wine and food pairing was main point of the night, here is a brief appraisal of each dish wot I cooked and the wine as selected by Corney & Barrow.

So yes, the tortellini didn't materialise but I felt that even if I still served up pasta anyway (ie tagliatelle) then the dish would still be a hit with the Veigadares Albarino, billed by Corney & Barrow as 'one of the hidden treasures of the world.' Given that pumpkin can be very sweet, the acidity of the Albarino certainly worked as a foil to cut through the richness of the dish, yet was still fruity enough to balance out the savoury thwhack from the sage beurre noisette. The warm chestnut also went down very well, along with the extra bits of bacon that I added at the end, which weren't in the original recipe. (Top tip: if you ever feel like you have cocked up a recipe, always add bacon. People soon forget once they've had bacon)


The main course consisting of turkey breast wrapped in parma ham with a herbed rosti and sauteed lettuce was a big hit at the table, along with the Pinot Noir. Turkey breast nearly always suffers from the danger of overcooking and can become dry and insipid but using Graham Campbell's method of poaching in foil ensured that the bird came out beautifully moist. My rosti could have done with a bit more seasoning but I have rekindled my love for grated spuds and have been making them ever since. And the braised baby gem was a revelation. Winter normally calls for hardier greens such as kale and cabbage to be served at the table but if you ever felt in need of something lighter (especially on Christmas Day) then shredded lettuce, tossed quickly in butter is definitely the way forward. In terms of matching, well the Muddy Water Slow Hand was greeted with applause from everyone. It was refined enough to match the delicate flavour of the turkey yet still had the punch to tackle the heady thyme jus. This red really was a lovely surprise and is definitely one that I want to try again.

Mrs FU was in charge of dessert and being the pudding queen that she is, served up a handsome slice of spiced apple crumble, as dreamt up by Marcus Wareing. Her main concern when making it was that the shortbread base had come out far too "cakey" for her liking. Yet when we tucked in, it soon became evident that Mr Wareing was opting for a variation of texture. Crunchy shortbread and a crunchy topping would have been two dimensional. In fact, I announced this to the rest of the table, ending with "Oh yah, I can so see what he is trying to achieve here dahlink." Which was a slight blast of pomposity but I blame Sticky Mickey for that. Now I liked this dessert wine and felt that it married up well with the ginger and cinnamon flavours of the slice but opinion was definitely divided, with some reporting too much of a cloying, funky after taste. So obviously I had to help the detractors by finishing off their glasses too before sending them off gaily into the night (we also drank a fair bit of Prosecco).

As a parting gesture regarding food and wine matching, someone once said to me that the whole notion of pairing was slightly ridiculous, as ordinarily whenever you turn up to someone's house with a bottle for a dinner party, you don't normally make a prior enquiry as to what is on the menu. You just walk in with something that you hope is presentable and not too cheap/bad and you certainly don't worry about whether its going to go with the food. "Have you ever drunk some wine that has totally ruined a meal? No, you drink what is on the table and quite regularly you have a great time don't you? Because you are drinking with friends and family." And there is an element of truth in that but at the same time, I do think that if you go the extra mile when combining wine and food, it does to help oil the wheels just that little bit more.

And anyway, it's just an observation that I got from a bloke, who I might have met in the pub. Or maybe it was in a wine bar. I can't remember.

Thanks go to Gary and Rebecca for heading out to the darkest sticks on a Thursday night and thanks go to Corney & Barrow for supplying the wines.

As part of the festive celebrations, Corney & Barrow have kindly offered readers of Food Urchin 15% off all wines from their Christmas shop. Just use the code GBCBLOG and you too could be the proud owner of a bottle of Stickey Mickey or Muddy Water (how do they come up with these names...?)