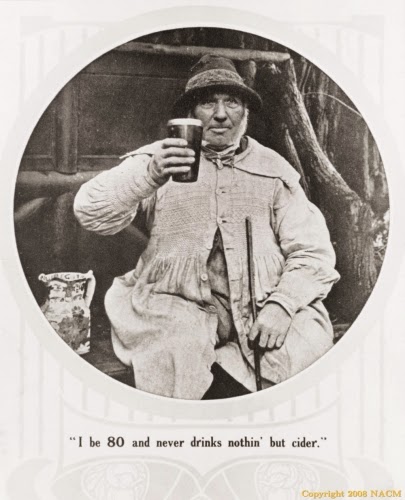 You know the feeling you get when someone breaks some really bad news to you and the way your head spins and the floor sort of opens up and swallows you and you collapse into a quivering heap of streaming snot and tears? Well, I had that sort of feeling yesterday, when I read in the papers that my beloved and booming cider industry is in disarray and currently faces an uncertain future.

After a very long and very wet winter, quite possibly the wettest winter in human memory, by all accounts, England's glorious apple orchards are currently in peril and currently still underwater. Plainly put because the winter has been so very wet, the wettest since Noah and his gang built the ark, there are still flood waters flooding the land and the trees are dying due to 'over-wetness'. Ironic really, when you consider that without water, the trees would also die.

But I digress and steer away from the heart of the matter. Which of course is the fact that this summer, currently looking like it could be the hottest on record if some long range forecasts are to be believed, it seems like we might have a cider shortage.

OH MY FUCKING GOD!!!! *screams and jumps through a window*

To say this is devastating is an understatement. You probably don't know this but I was raised on cider. Apparently it was the only thing that would get me sleep when I was a wee bairn. This cider consumption continued through into my formative years and led me on many a merry chase through country parks and council estates, escaping the clutches of the law. I have missed whole weekends at Glastonbury before, simply because I found the Cider bus and never left its side and I have quaffed more than my fill of Aspalls, sat on pub benches in Norfolk in the sunshine. Waking up delirious with sunstroke and a thumping head has never deterred me from the mystical delights of cider and I have never, ever met an unhappy cider producer, who also didn't look like an extra from Lord of the Rings.

In short, I love cider and the headlines yesterday made me a very unhappy bunny indeed and so I wailed and hollered like a banshee all over Twitter.

Then the folks who run social meeja for the Somerset Cheese, Cider and Moozic Fest wafted this link (from the Bridgwater Mercury) under my nose like a dose of Epsom salts. It seems that Julian Temperley, he of the Somerset Cider Company, did talk ruefully to the media and say that yes, the weather has had an impact on orchards across the land, with some trees suffering damage. But he did go on to say that "We are not talking a game-changing amount and to say there is going to be a drought is undoubtedly alarmist."

Well, thank Jiminy Cricket for that! I really can't tell what a relief it was when I heard that he'd said that too.

But we do need to get to the crux of the matter here, insofar that the nationals and mainstream media really should be taken to account and rapped over the wrist for releasing alarmist, headline grabbing stories such as these. Every single one left out that last quote! A little bit naughty if you ask me. It might drive demand and sales but in the long term, it is not always good for the industry. Especially if this sort of scaremongering sets off panic buying, with people frantically piling into shops. To buy as much cider they can get their hands on. This precious, life-enhancing, knee-bending loopy juice .

For instance, I saw one little old lady get pushed in the face in Tescos this morning as some burly, tattooed oaf whizzed past her; his trolley chock full of cases of Magners. It was a terrible scene and she dropped and smashed her bottle of Stone's Ginger Wine and everything.

Is this the sort of reaction, the sort of behaviour that the Daily Mail wants to provoke? To encourage stockpiling? To drive cider prices up? Do they want a new, insidious, cider-based black market to bloom? Do we want a real shortage on our hands?

No, we don't. And therefore this sort of madness must stop. Right now. Before it starts raining again.
Labels: cider comment ranting writing

Unknown said…
Well this sounds very serious indeed. Being a cider lover like you, I can't imagine a summer (or indeed couple of days) without cider, but if morons want to rid Tescos of their Magners supplies, then they are welcome to it, leaving me with the good stuff!
3 April 2014 at 14:06