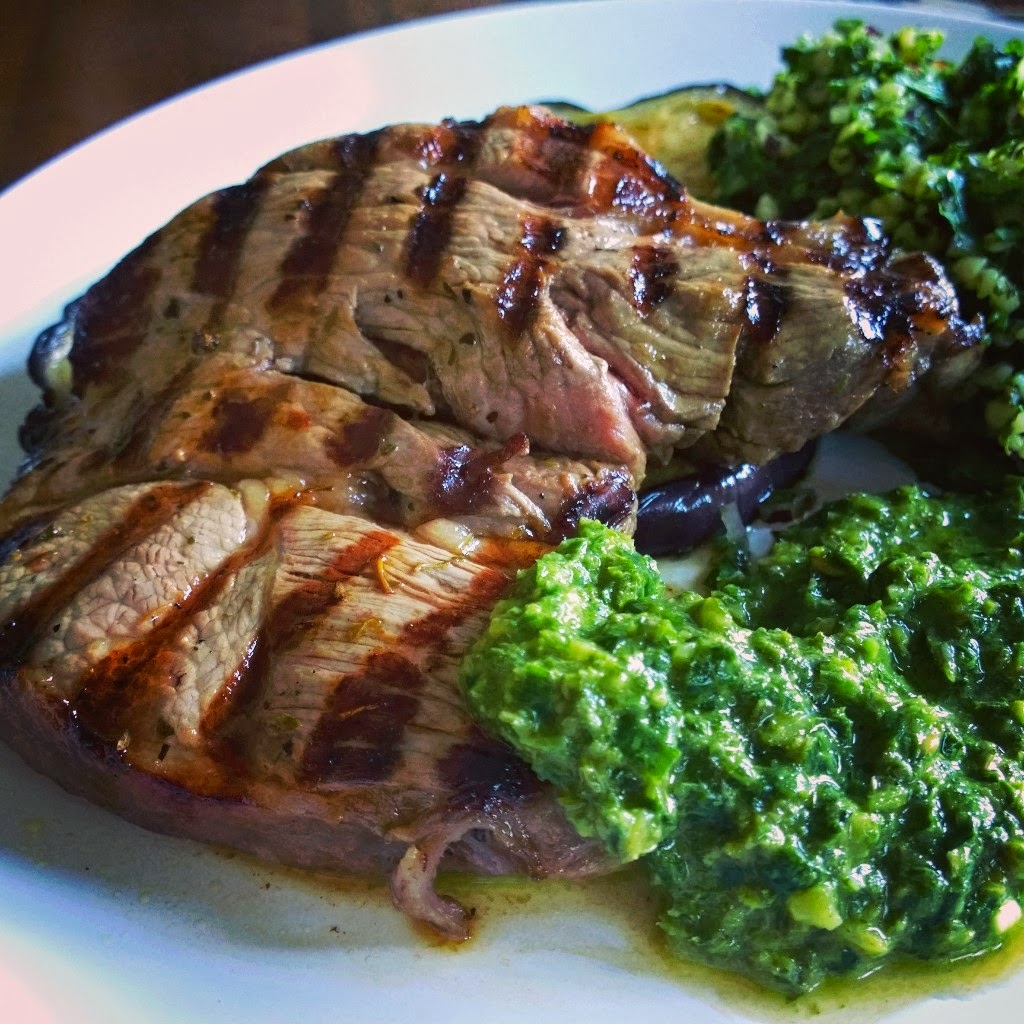 This post first appeared on the Great British Chefs blog
At the moment I am in the process of turning my back garden into more of an edible one. Although we made the sad decision to give up our plot at Norfolk Road Allotments last year, I knew that I wouldn’t be able to abandon the idea of growing our own fruit and veg for too long. As such, a cornucopia of pots, troughs and potato bags currently litters the place, full to the brim with compost and all ready to go. I have even managed to bag some old railway sleepers which will be used at some point to build a raised bed. I say at some point, I need to give my poor old back a rest first. Railway sleepers are not light.

The area to build this magnificent bed is not big but it will take up a spot where weeds seem to grow vigorously. I like to keep things a bit wild in the garden but I do need to do something about the clump of nettles that proliferate in this particular area. The Easter holiday break has brought more than its fair share of tears and pink welts after a kick-about with the football.

So I started clearing the nettles away earlier this week and whilst I was digging them up, I began to muse about the culinary aspects of these vicious plants (always thinking with my stomach me) pondering if some of the leaves could be put to good use. There was a fair amount of sticky willy that needed cutting back too and I wondered if I could eat that as well. By the way, you can stop that sniggering at the back of the class if you please. When I refer to ‘sticky willy’ I am talking of course about goosegrass, that velcro-type weed that you used to throw on your mates’ back after school.
After a quick bit of research on the Internet, it seems that you can eat goosegrass and whilst the majority of the plant is akin to chewing on a cat’s furry tongue, apparently the young tips are quite sweet and delicious. And I can confirm that because I ran some under the tap and shoved them into my gob. 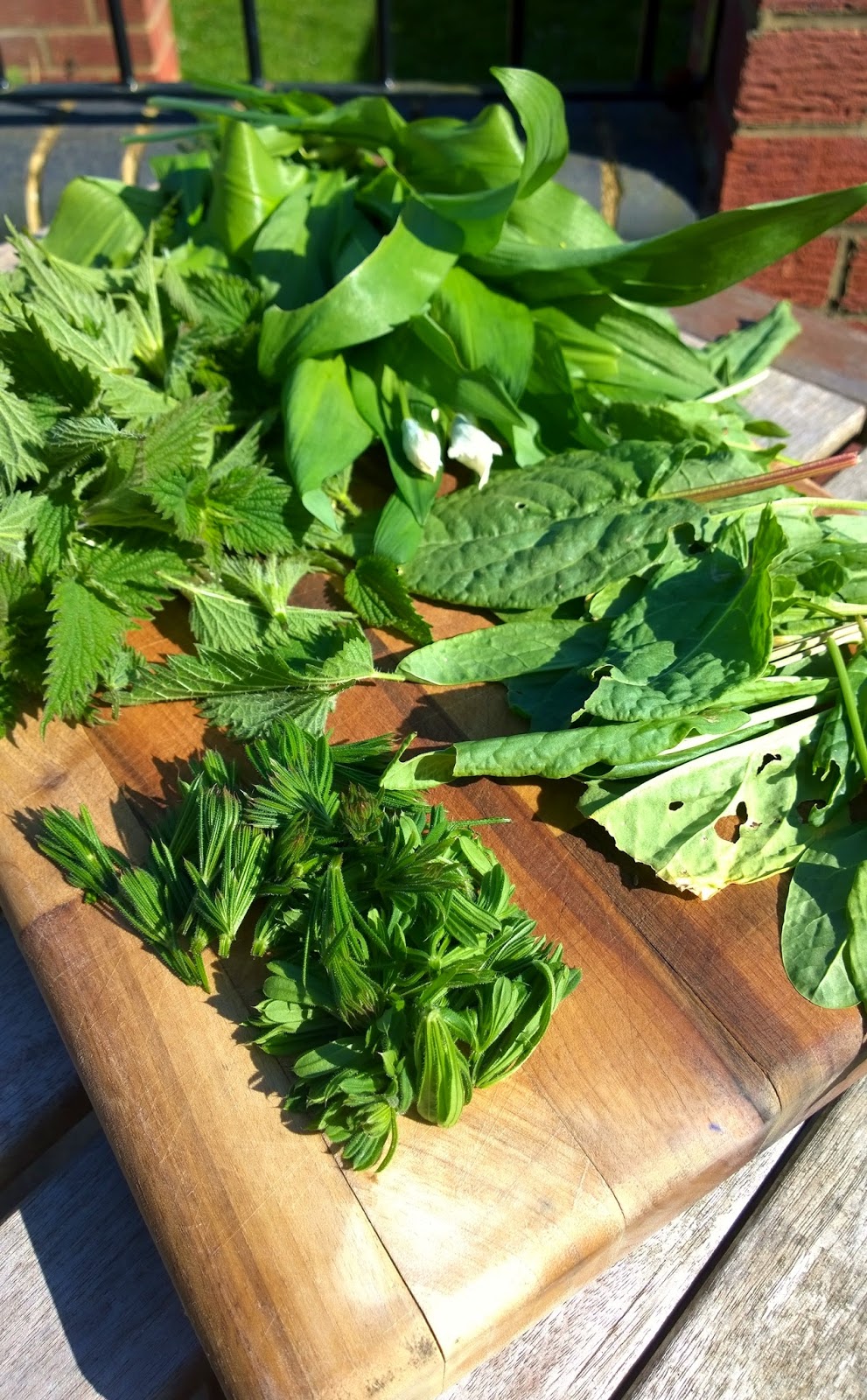 With my mind fizzing, I then began to wonder if I could make some sort of foraged salsa verde using these weeds, along with some wild garlic and sorrel that I’ve also got growing in abundance. This verdant sauce (or middle-class ketchup as it is also known) goes really well with grilled meat or fish and normally uses standard herbs such as parsley, basil and mint; so to use nettles and goosegrass and whatnot, didn’t seem to be too much of a stretch of the imagination. There were also green after all.
Taking the plunge yesterday, I am pleased to announce that it works. It’s actually a lot lighter in flavour than the usual salsa verde I make, tasting more of citrus than the normal woody notes you get. It certainly went very well with the lamb steak I grilled for supper. 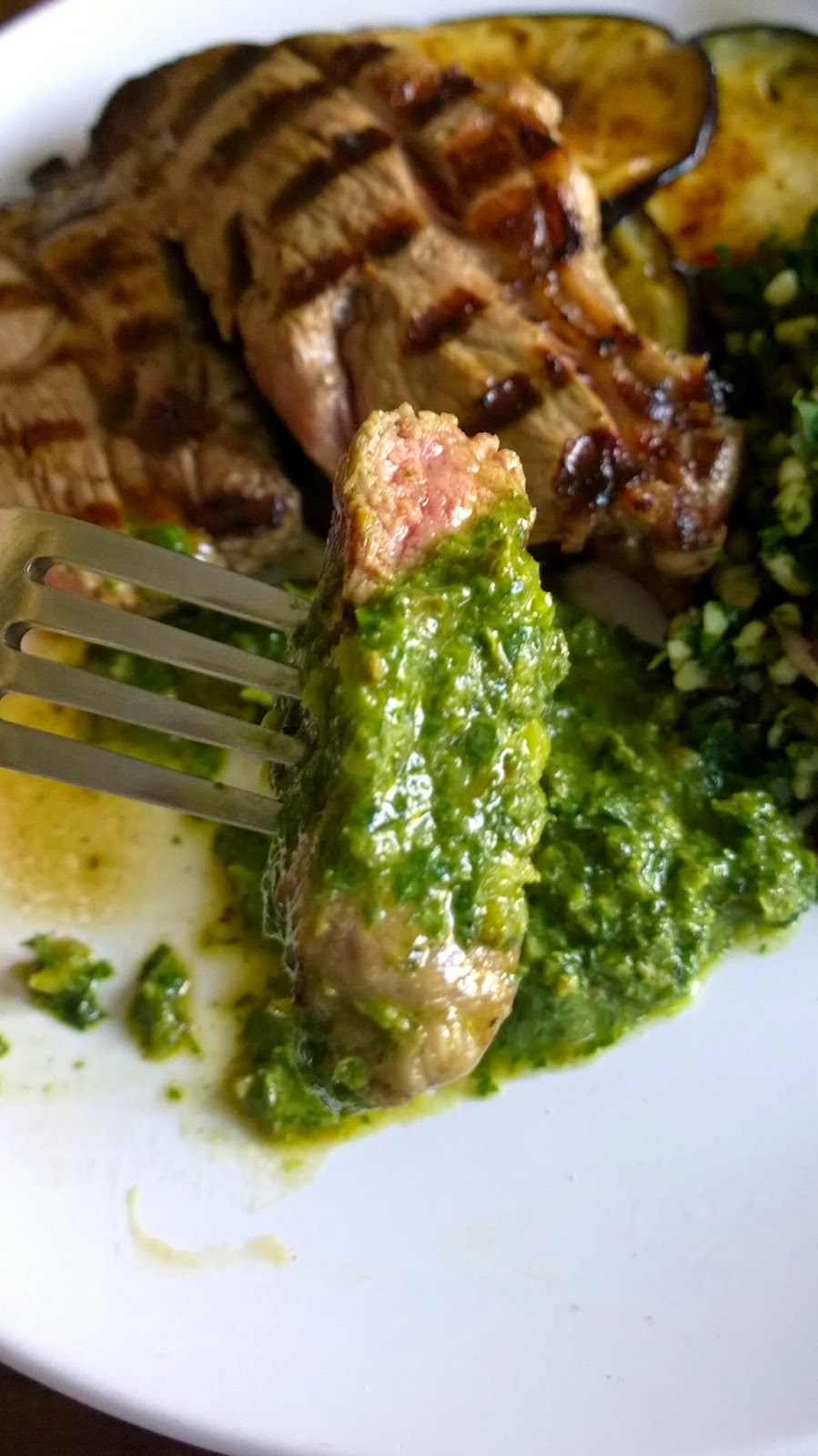 So if a big barbecue is on the agenda this Easter weekend this is something you definitely should try making, to serve alongside whatever is planned for the grill, sausages, chops, burgers etc.  Provided that you can get hold of the ingredients in hand (the sorrel might be tricky but the rest should be easy to find) this alternative, punchy salsa verde will certainly impress, especially when you say that it contains stinging nettles.

You might want to explain the sticky willy though. 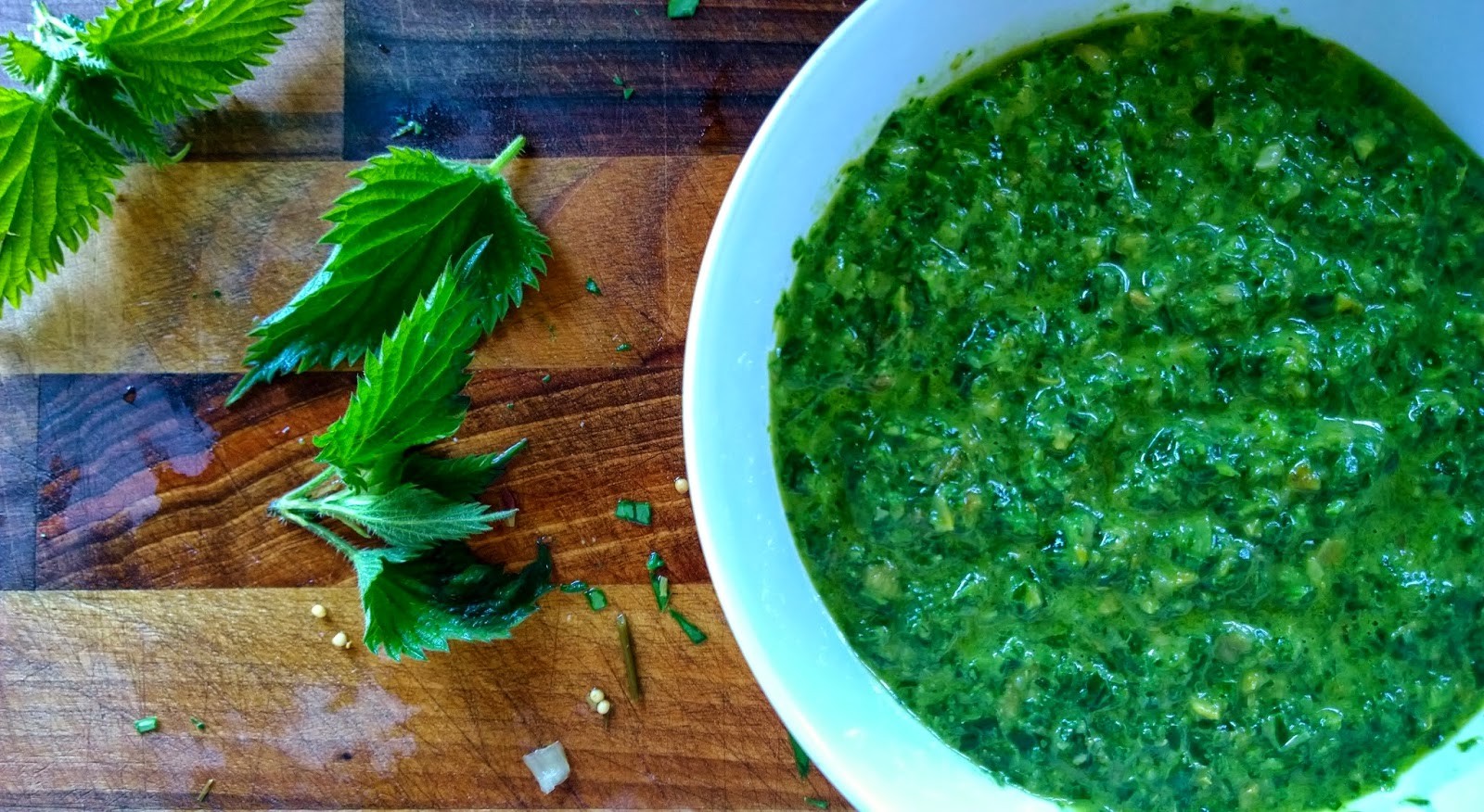 The measurements for this recipe concerning the foraged leaves are fairly approximate and you may want to play with quantities, according to personal taste. There is something to be said about chopping them up though, as opposed to putting everything in the food processor. I prefer a course texture as opposed to smooth. The nettles once picked will lose their sting after a while but if you want to blanch very quickly in boiling water, that won’t do any harm. As always, try to pick away from busy areas i.e. parks and roads and wash everything thoroughly.  And if you are not 100% sure of what you are collecting, leave well alone!

Simply chop all the leaves finely and place into a bowl, then roughly chop the capers, cornichons and anchovies and add. Mix in the Dijon, red wine vinegar and olive oil and then season to taste. A very simple, gorgeous tasting sauce. 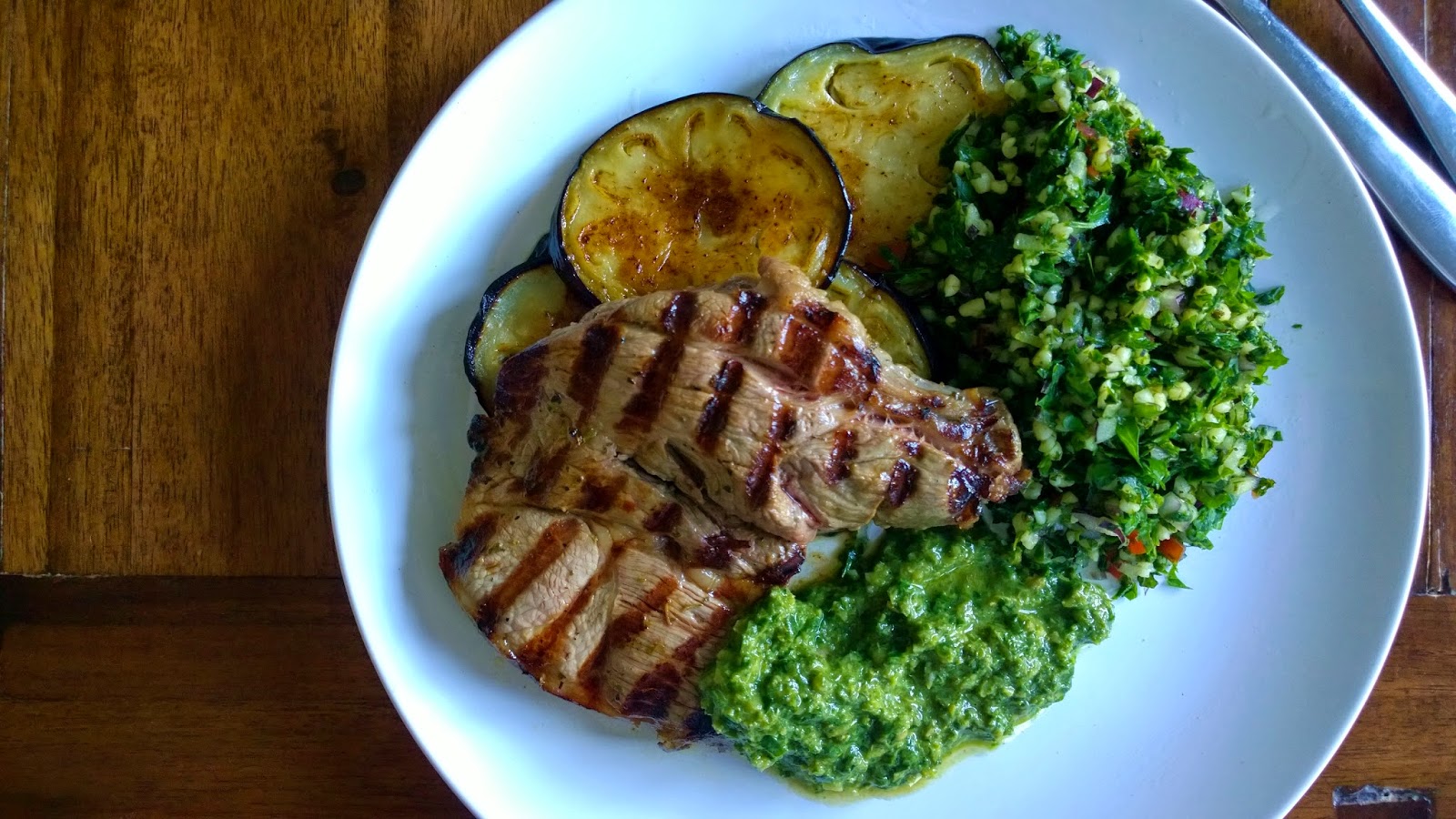