Paul Ainsworth at No.6 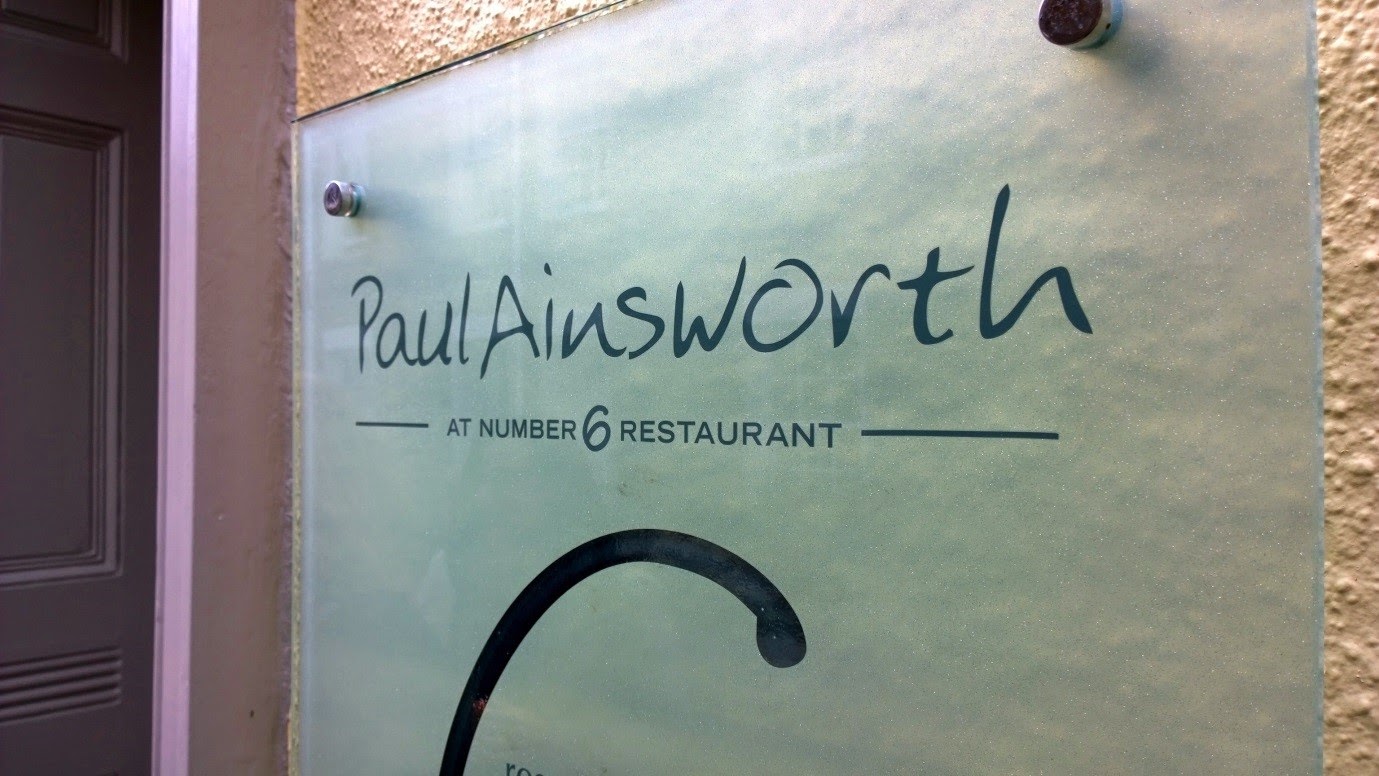 Paul Ainsworth is a lovely, lovely guy, who wants nothing more than for his guests and customers to feel happy, relaxed and comfortable. I know this because I visited his restaurant recently and I bumped into the man himself on the upstairs landing. We probably chatted for no longer than a few minutes. Polite conversation about business; the effect of the winter storms on the local economy; travelling down from London, that kind of thing, and Paul was smiling and twinkling throughout. But you know when small talk leads a sort of impasse, when two strangers who don’t really know each other come to a full stop and that silent gap suddenly appears? Well that happened and the tumbleweed definite rolled in for a second or two.

Snatching a quick glance at his watch, it soon became apparent that Paul was desperate to get back into the kitchen. Me? Well I was gyrating like Tom Jones by that point because I was desperate for the loo. Thankfully the stand-off didn’t last too long and after shaking each other’s hand, we both soon got down to business. And so, if I had to be at all critical about my experience at Number 6, it would be that Paul very nearly made me wet myself. But other than that, everything else went off like a dream. 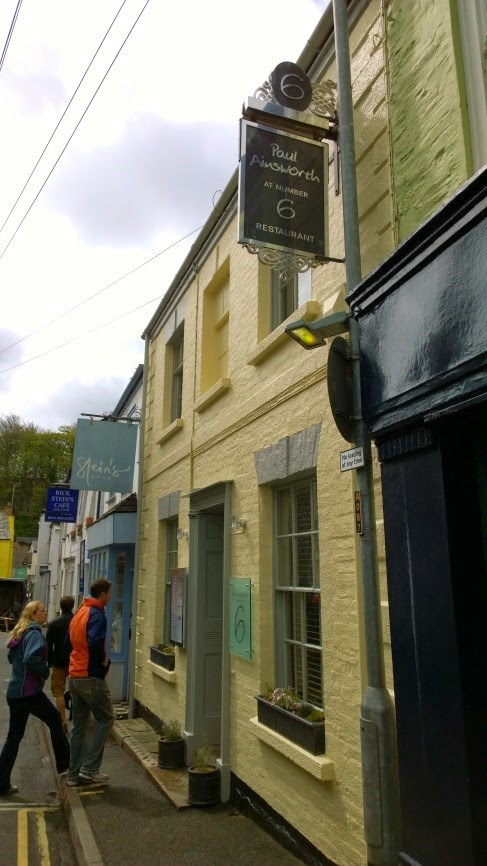 Based in the Cornish epicentre of food that is Padstow, Number 6 used to be a bed and breakfast and you can sort of tell. The modern interior may be relinquished of chintz and porcelain dolls but the main mantra of comfort and friendliness remains. And after stepping through the doors, it really does feel like you are stepping into someone’s home. Having been greeted by various members of front of house, who were all warm, engaging and funny, I felt the tension ease from my shoulders straight away. Some restaurants with Michelin stars on the door can create a vibe where you feel like you’re sitting there a broom pole shoved down the back of your jumper, but not here.

After reading the lunch menu, it obviously had flair and imagination but it was nice not to feel befuddled and overawed by whimsy or florid descriptions. The desserts had some curious titles sure but at least we knew what was coming, especially as some of us were fans of the Great British Menu. I did have to ask what a ‘crubeen’ was though and after listening to our waiter/sommelier, I was quickly sold on the idea. Based on a solid Irish delicacy, the Cornish version consisted of pig’s trotter, braised and rolled into ballotine and then fried and sliced, served with sweet red pepper, foie gras and smoked almonds. After taking our orders, I was left dribbling at the table, which couldn’t have been a pretty picture but thankfully some fantastic looking bread soon arrived afterwards. 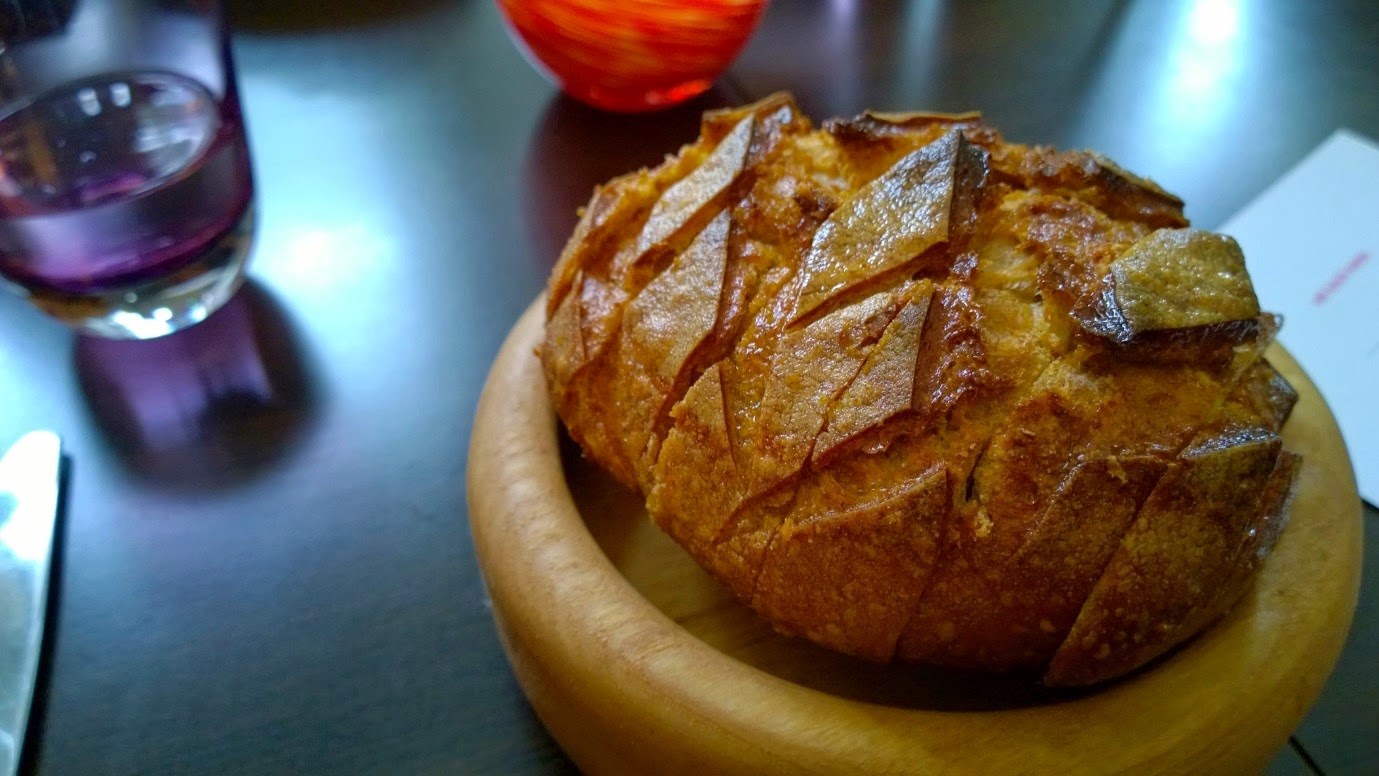 Small yet perfectly formed, the sourdough served up had a good crust and tangy texture and the accompanying cod roe, sprinkled with pork crackling was something else. Give me a day on the beach, in the sun, slathering this light fluffy mousse on some crisp bread and I will be a very happy man. Just remind me to put some sun cream on. 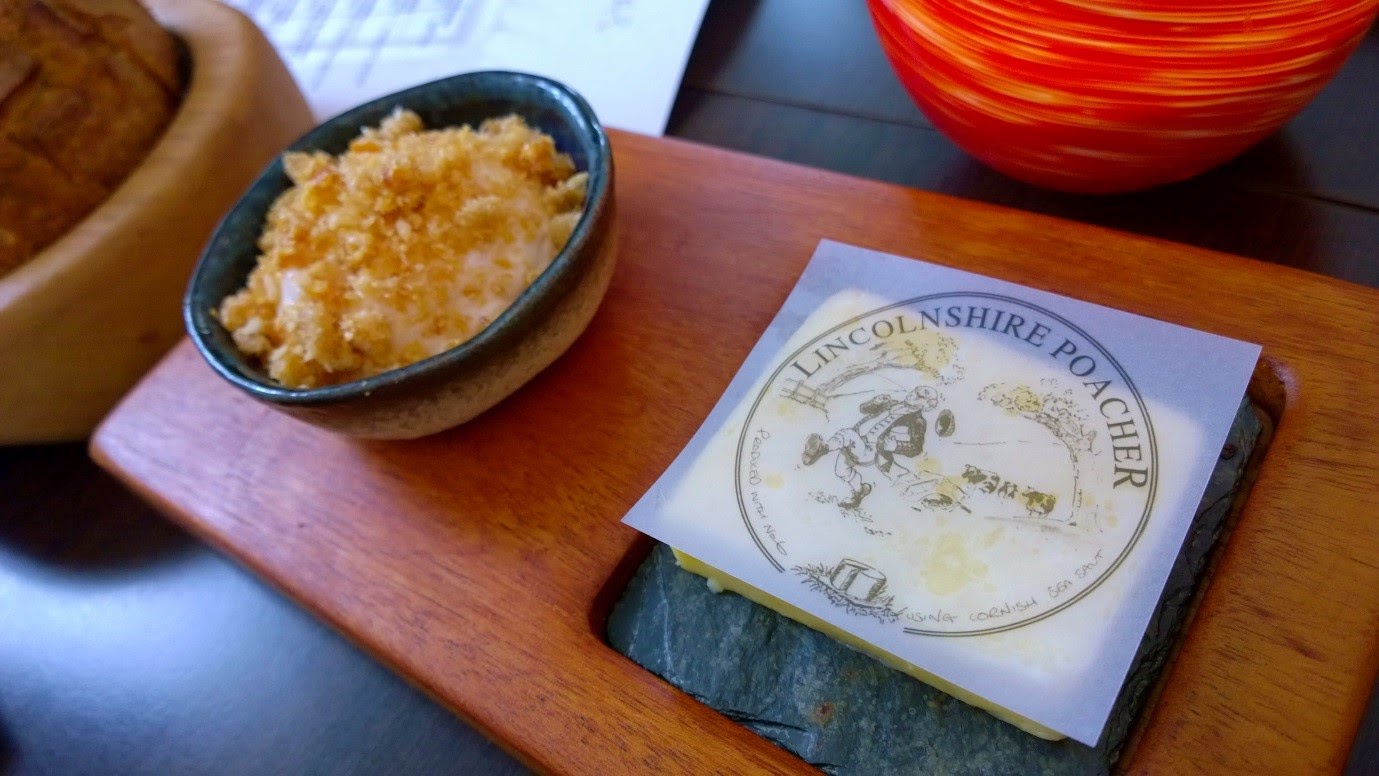 My Cornish crubeen came up next and although I don’t like to get competitive at the table, I think I can safely say that I ordered best because it looked stunning. 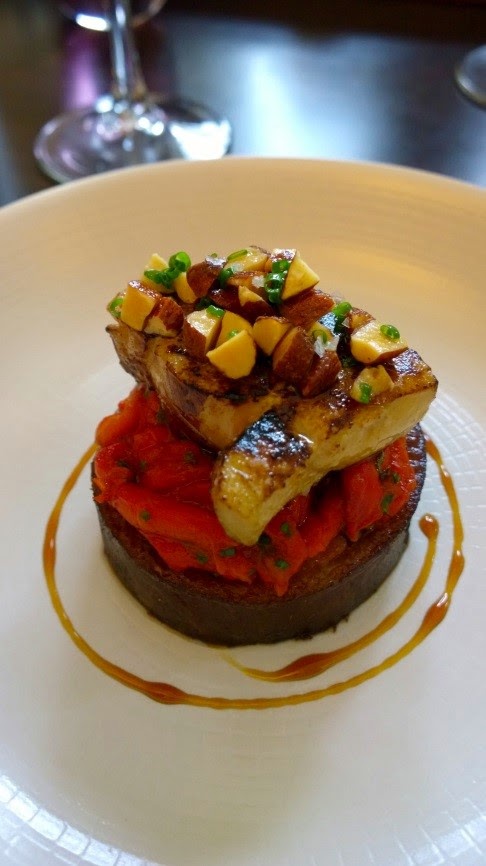 The flavours that come through were no less remarkable. Combining an earthy, pork base with soft, saccharine peppers and rich, fatty liver amounted to a really special mouthful of food. And the smoked chopped nuts were the icing on the cake really. I tend to be vocal when I am enjoying my food and after eating this, I would say that I gave that Meg Ryan from that scene in ‘When Harry Met Sally’ a run for her money.

For mains, I ordered day boat monkish that came with wild garlic, roast bone marrow, sour cream and a veal shin salad. Again this was a very attractive looking plate of food yet I was intrigued as to how the meat elements would fit in, thinking that perhaps the monkfish would suffer. But it didn’t. The fish was more than robust enough and the wobbly bone marrow, which was just teetering on the edge of melting, partnered up very well indeed. The thing that really impressed me though was the veal shin. Tucked amongst some charred lettuce, the veal had the consistency of pulled pork but it was much silkier on the tongue and jam packed with dense, meaty flavour. Rolled my eyeballs so it did. 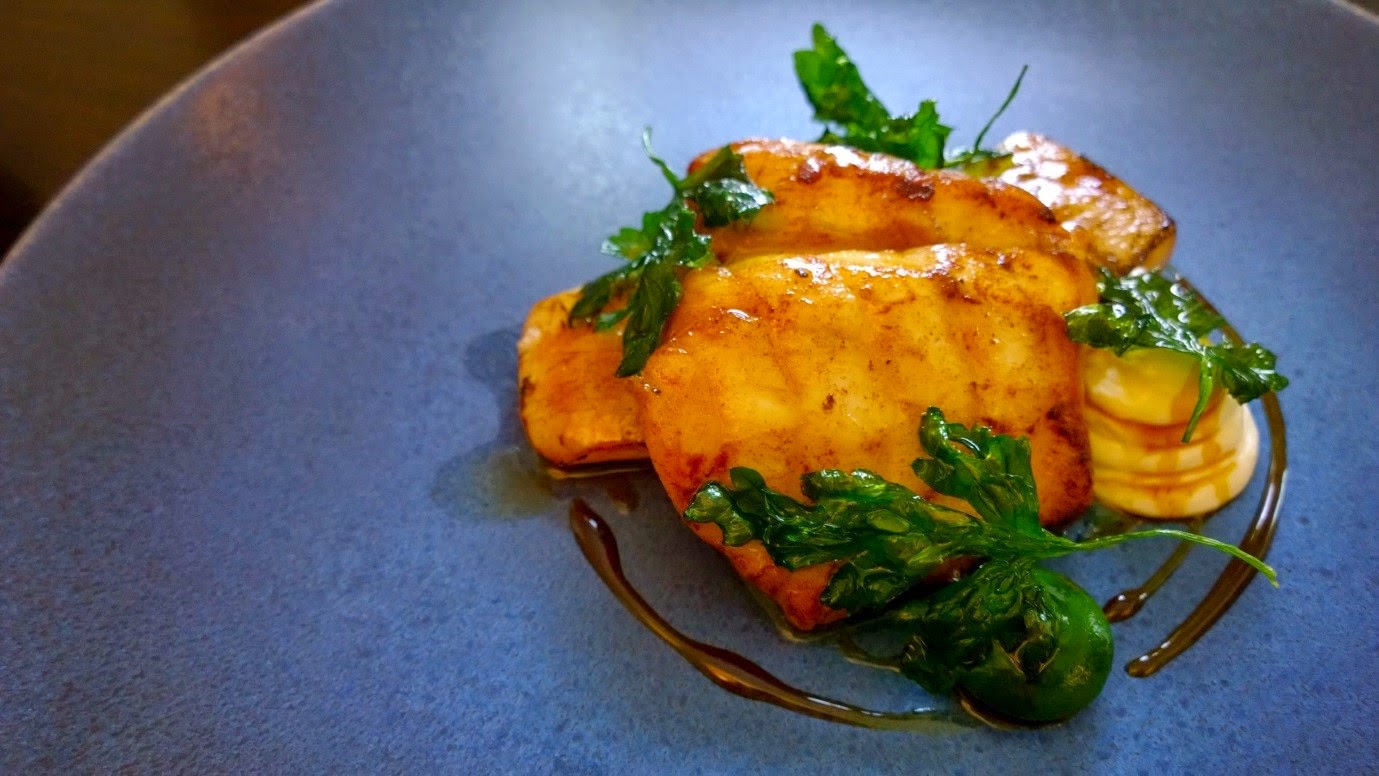 Battle lines were drawn for dessert but after a gentle nudge from the waiter, I settled on ‘a trifle Cornish’ which wasn’t as ambiguous as I thought it might be. Deconstructed trifle is what it is but that shouldn’t cause you to stifle a yawn because it was amazing. Vanilla panna cotta, a biscuit wafer, poached rhubarb and rhubarb puree and a handsome dollop of saffron cream all sits very merrily in the bowl. With a slice of squidgy saffron cake (a Cornish classic) set to the side for good measure. A friend who shared the same dessert thought that the pastry chef might have over-egged things a touch in the saffron stakes but I was more than happy. I would even go so far to say that it was better than the theatre of ‘A Trip To The Fairground’, Paul’s show stopping banquet dessert from the aforementioned Great British Menu of 2011. But I would be lying. The friends sat opposite ordered it and it was immense. 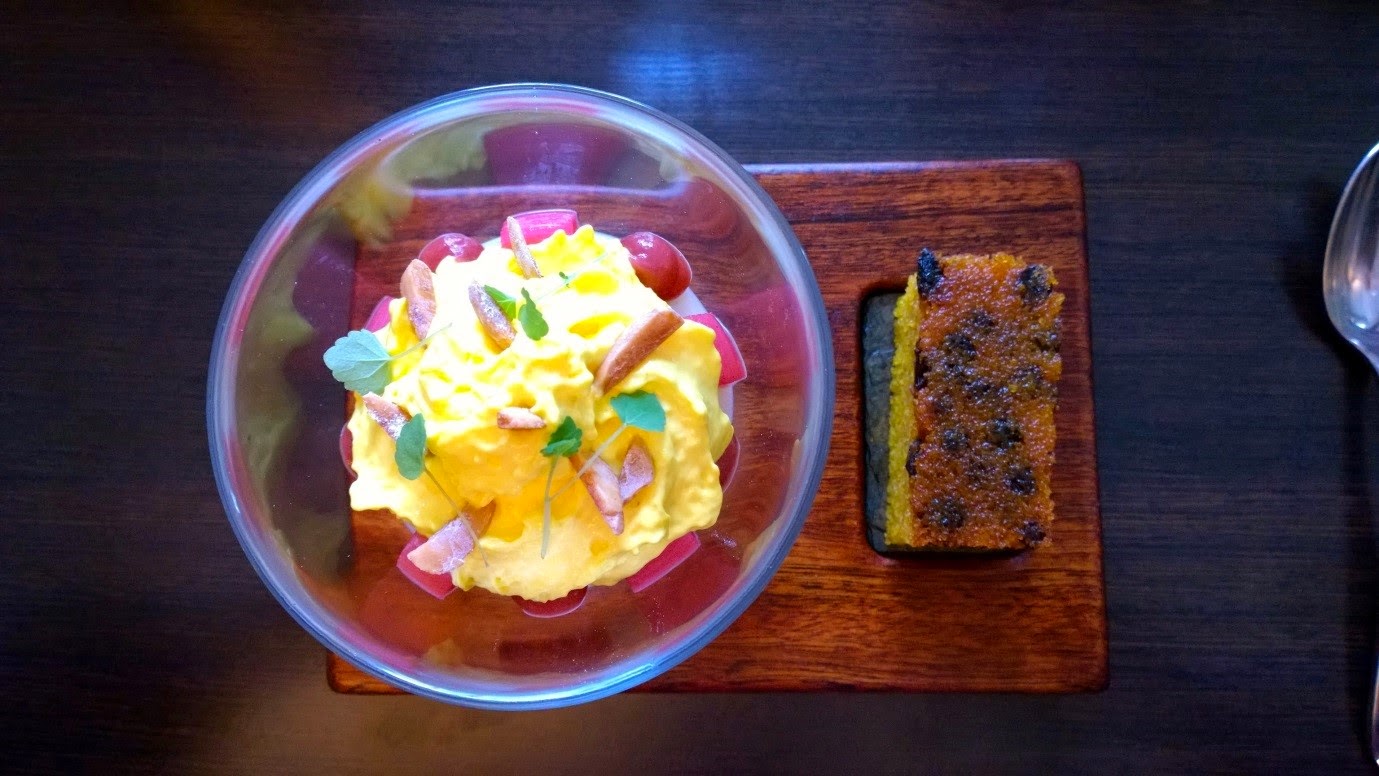 Built from memories from Paul’s childhood, a display of honeycomb lollipops peppered with popping candy, elongated cinnamon doughnuts (or beignets?), toffee apple set atop marshmallow, peanut and chocolate ice cream and an iddy biddy saucepan of raspberry curd had us all cheering like giddy school kids. If you ever go to Number 6 you must, must try this but do give yourself time to digest before getting the bus home though. Memories of coach journeys to the zoo came flooding back when we left and sped off down country lanes onto our next destination. 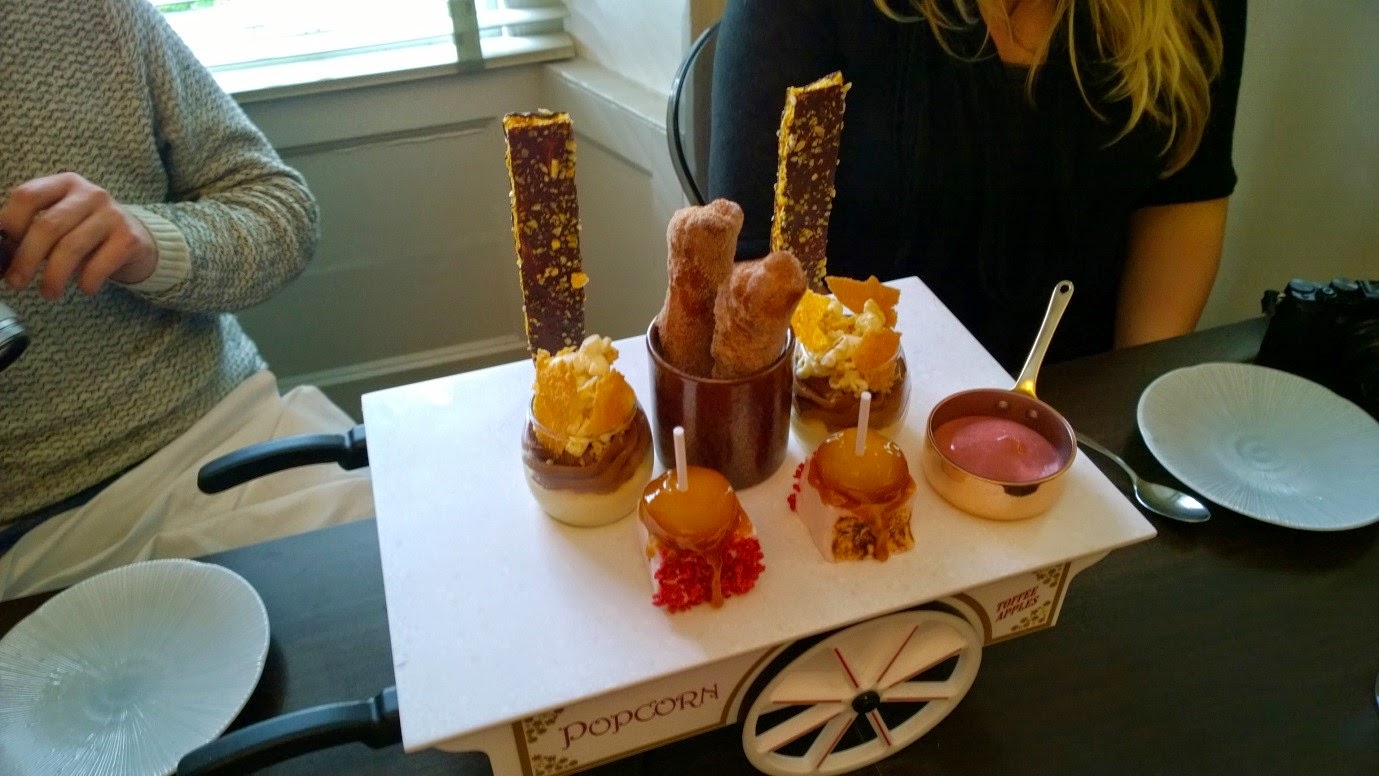 Given that this visit was part of a culinary whistle stop tour of Cornwall, I am definitely going to try and return to Number 6 to take in fully the chilled and relaxed atmosphere it so readily exudes. What was accomplished by the chefs and waiting staff in the space of time we were there, was nothing short of miraculous. And I am not just talking about the food here; I am talking about how the restaurant made us all feel. You have to be wary reading that last sentence of course; I was part of a privileged group of bloggers that was invited to review the place after all. But judging by the other diners, who calmly enjoyed their meals, ambivalent to our hustle and bustle; I think I can confidently say that’s what Number 6 is all about. They just want to make sure that their patrons simply have a good time, free of fussiness and pretension.

And I like that a lot.
Labels: Great British Chefs review