The Bull and Last, Kentish Town 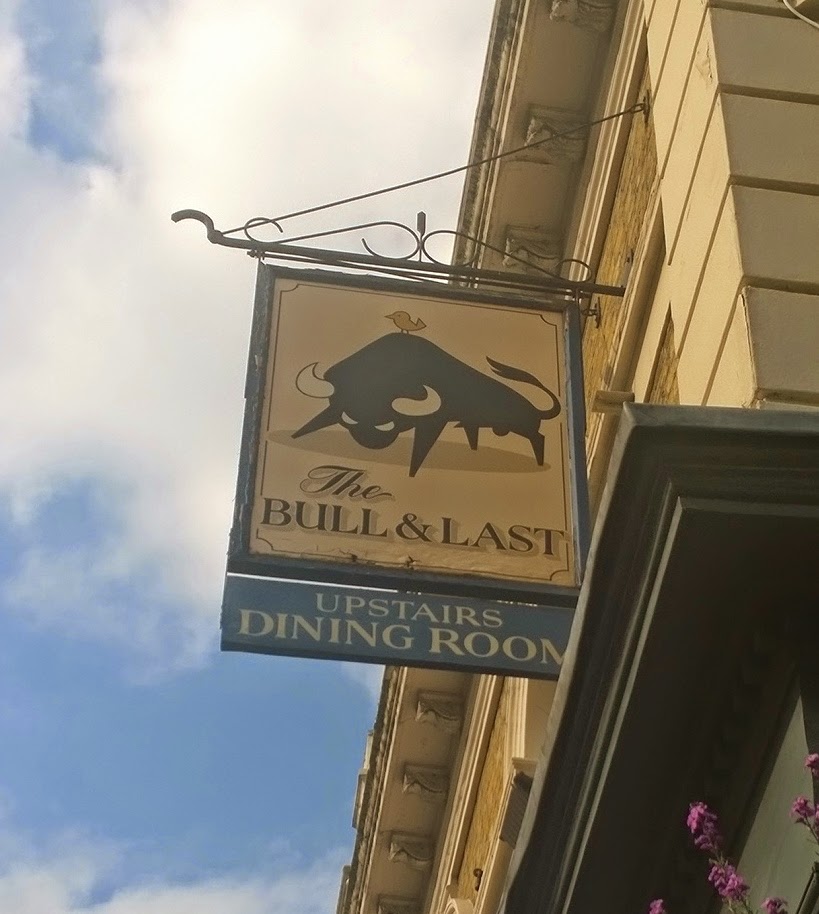 Despite taking a keen interest in geography when I was younger, I have to say that my sense of direction is notoriously bad. If you ever find yourself lost on the streets of London, don't ever ask me which way to head. Because I will almost certainly send you down the wrong street to the wrong side of town. Once, around lunchtime near my office, a poor soul anxiously approached me wishing to get to St Pauls and I sent them on their way with a series of left/right gesticulations, smiling confidently as I did so. However as I soon as I turned tail, I realised that I had actually sent them in the opposite direction so I hastily blended into the crowd and waltzed off myself. I spotted the same person about 10 minutes later and the look on his face suggested to me that he was very angry. And quite possibly late. But hey, he must got directions off the right person because as he surged down the street, I could see St Christopher's dome rising magnificently in the background. I was just glad that he didn't see me.

With that in mind, my inner GPS went all shonky again this weekend. For an anniversary treat I booked a table at The Bull and Last, an esteemed gastropub favoured by Chris Pople and some bloke called Coren. And when I say I booked it, I mean just that. "Hello? Can I have a table? Thank you. Goodbye." I didn't think much more of it afterwards. So when the time came around, after a night in Hammersmith, watching some strange witch-like woman wail and float around the stage, when Mrs FU asked me if I knew where we were going, I naturally said yes.

When we got off the tube at Highgate Station she asked me the question again.

"Yes, the pub is around here somewhere," I replied as we trotted off down the hill. "It's on Highgate Road. This is Highgate Hill. Look see the road sign. Let's just keep walking, we'll find it soon enough."

Mrs FU gave it the magic 10 minutes before she asked me one more time.

"Are you sure it's around here?"

After a quick peruse on Google maps on the phone, it soon turned out we were quite a fair distance from the pub. In roughly the right area, I hastily tried to defend but oooh, it was still a bit of trek wasn't it. The silence was deafening as we started to sprint, apart from the occasional pant of breath and "Mind that dog shit" (the streets of North London are caked I tell you). Luckily we managed to get to the pub, bang on the nose for our reservation.

I don't think I have ever seen my wife down a pint so quickly before but as she wiped the sweat away from her brow and judging by the look in her eyes, I don't think I'll be in charge of booking restaurants for much longer. 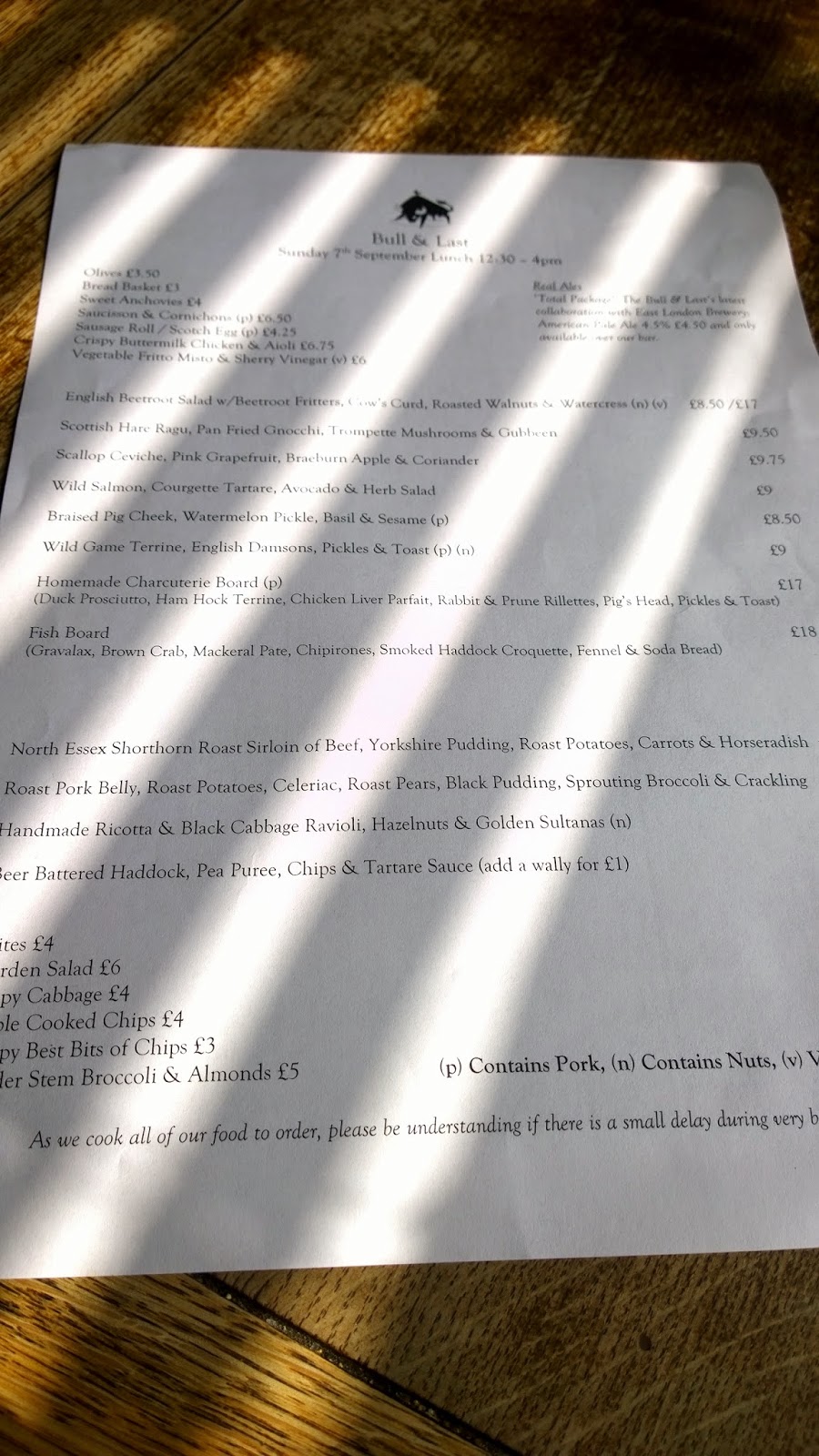 The great thing about The Bull and Last, or where we were sat upstairs at least, is that the place is large and airy and when asked, the waiters will gladly open a window for you. So we managed to cool down and get nice and comfortable quite quickly. The decor of old paintings, stuffed animals wearing jaunty napkins, bashed up tables and chairs was fairly de rigueur for a gastropub; which does makes wonder whether everyone goes to the same taxidermist-come-antiques dealer (who must be making a fortune). But still, the ambiance was relaxed, with only the occasional "Rah!" to puncture the air and the aforementioned beer was very good. A pint of Five Points Pale Ale and a pint of Redemption..... something or the other. I think. 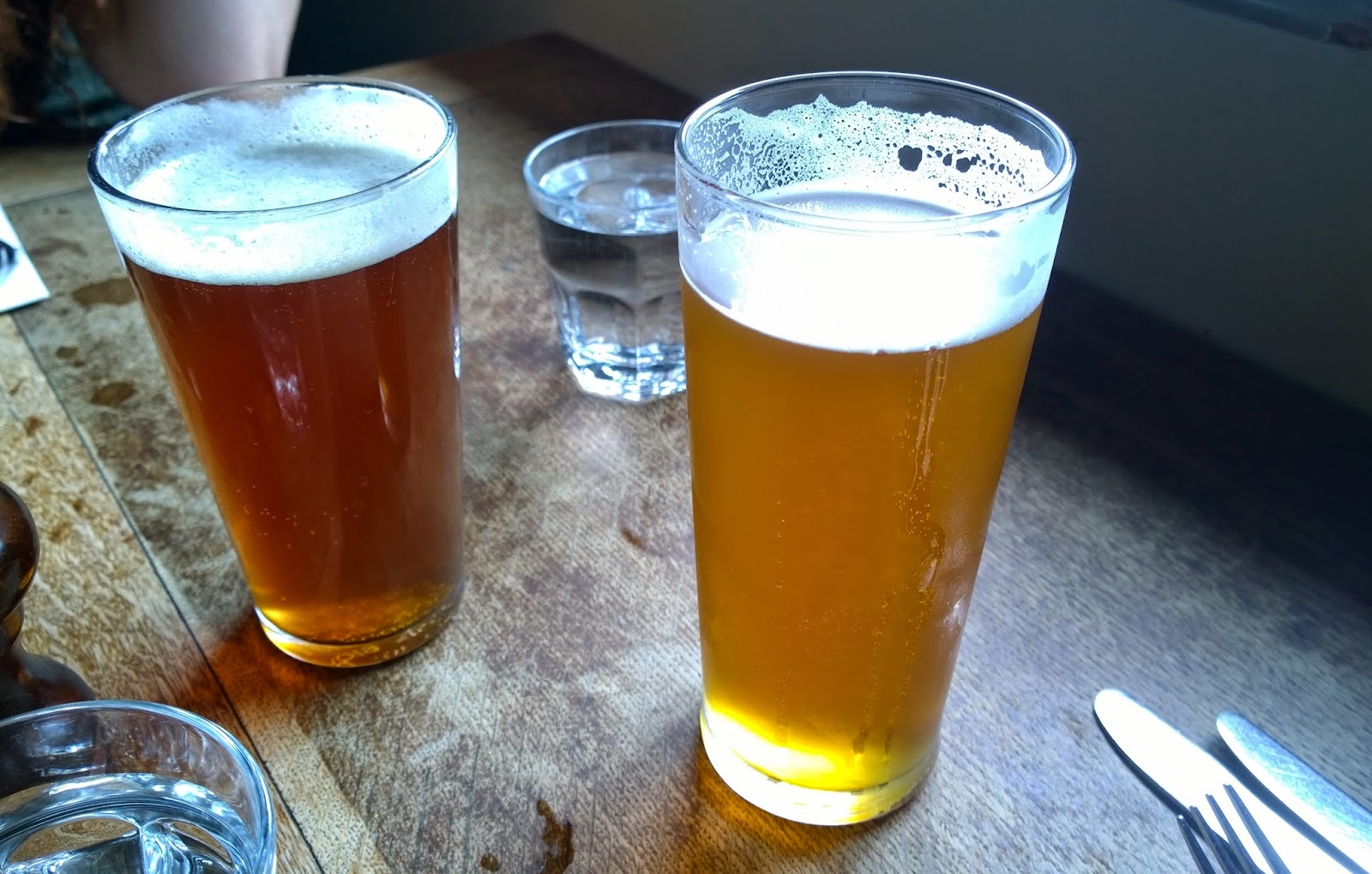 The menu was seasonal and British, leaning towards to the more gutsy side of proceedings, which suited me down the ground. I did ponder for a little while about some delicate sounding English beetroot with cow's curd and roasted walnuts, but I was starving after that walk so I ordered the braised pig cheek with watermelon pickle and sesame. Followed by the pork belly, black pudding, crackling and all the trimmings. Yes, double pork. Or triple in fact. 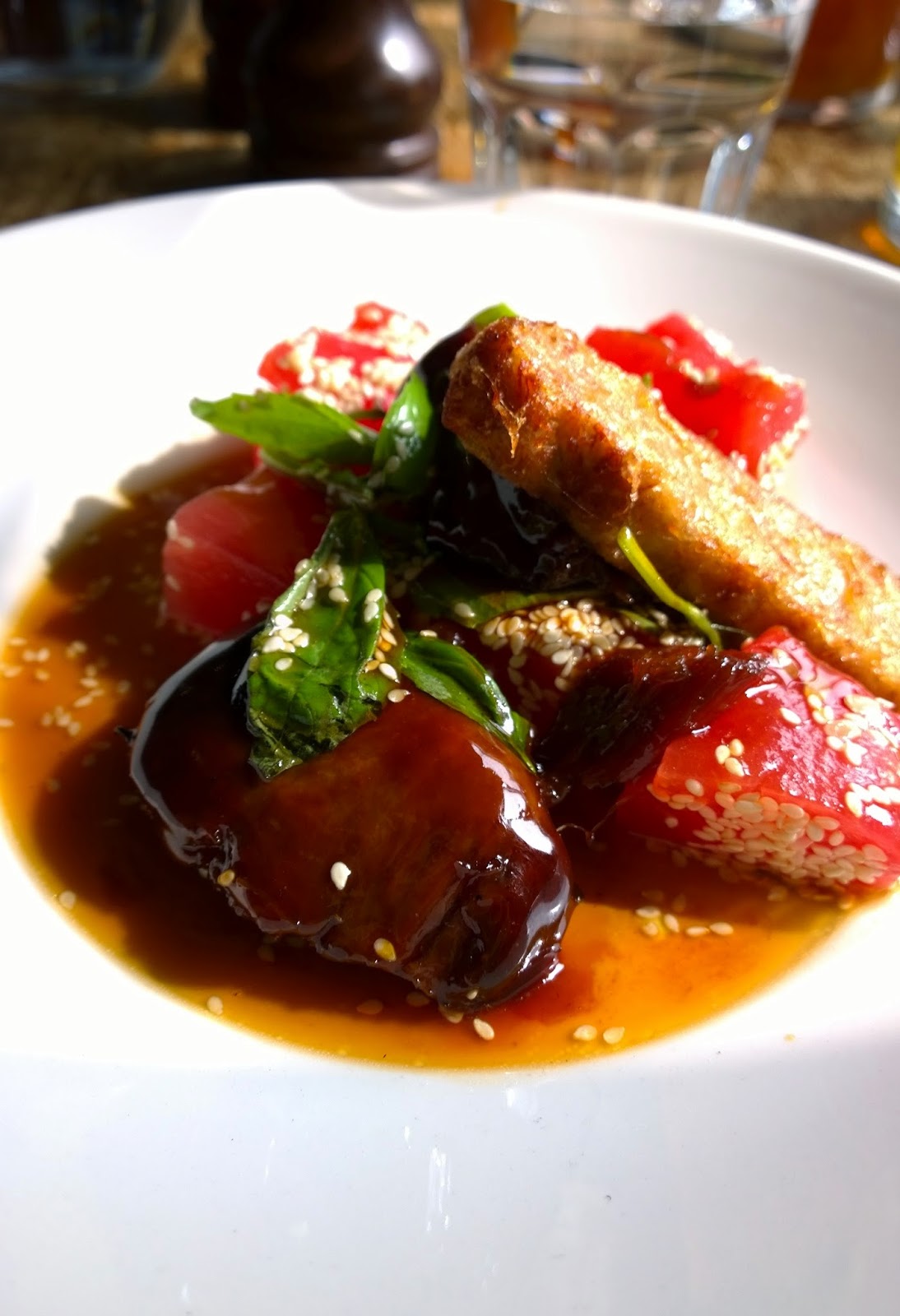 Now I love a pig cheek or two and the idea of pairing them with watermelon seemed very fanciful. It certainly looked exotic when the plate arrived at the table and as I pressed my fork into the teriyaki oyster of pork, it collapsed wonderfully under the weight. Coupled with chunks of pickled yet still crisp watermelon and peppery herbs, each mouthful was unusual, quirky and perhaps one of the best things I have eaten all year. My praises for this dish would have gone superlative if the waiter had put two cheeks in front of me. But alas, I only got one and half cheeks. Which seemed a touch stingy when you consider how cheap they are. Nevertheless, it got me first points on the score board which is oh so important when you eat out with your partner. 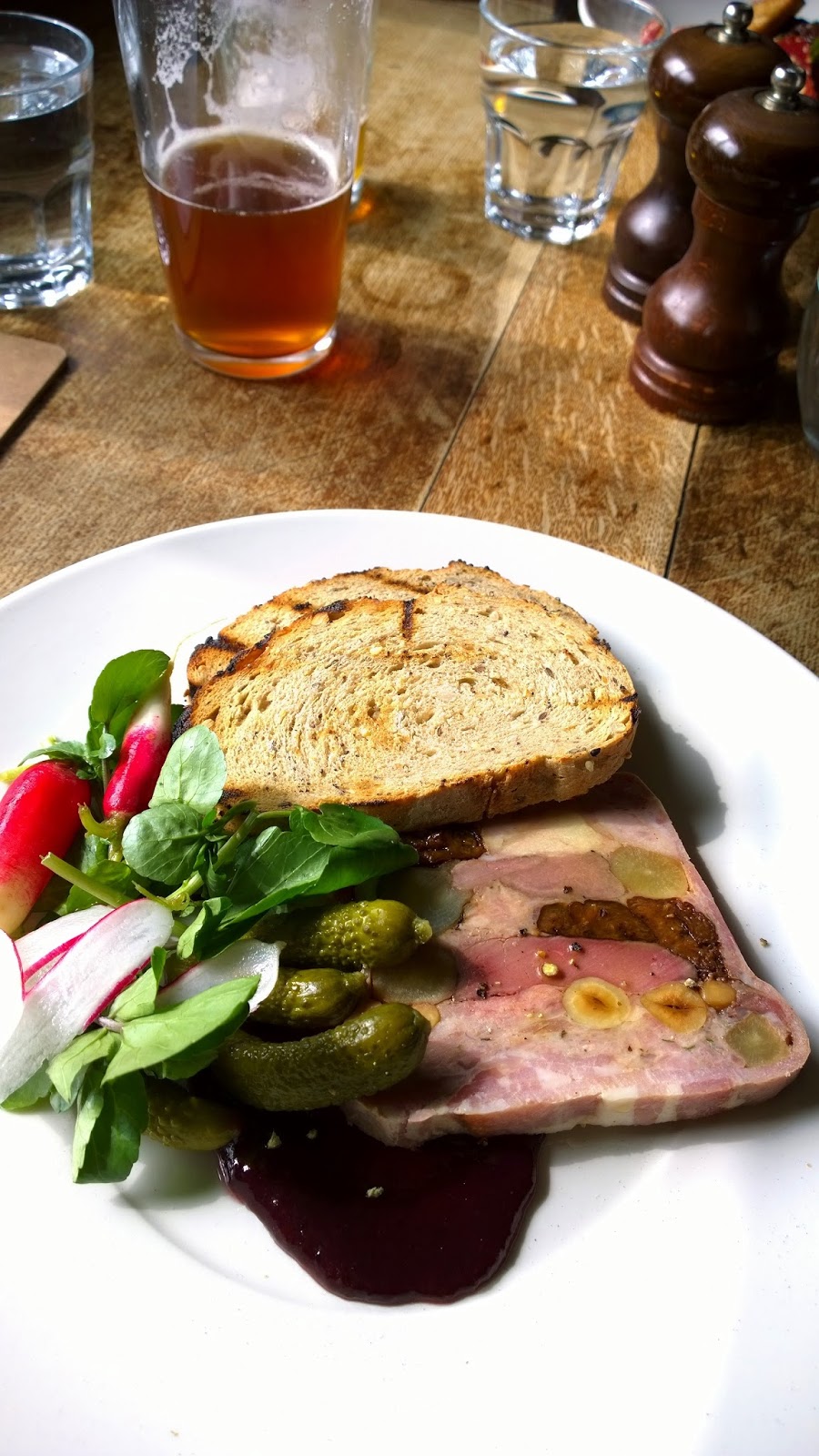 Not that Mrs FU's choice misfired. Her wild game terrine with damsons, pickles and toast also hit the spot and there is always something to admire in a well constructed slice. We played quite the guessing game as to what game was in the meat loaf and I am adamant that they stuck a prune into the mix. Not that my wife listened to me. She was too busy licking the damson jelly off the plate. Also, fantastic radishes but still, 1-0. 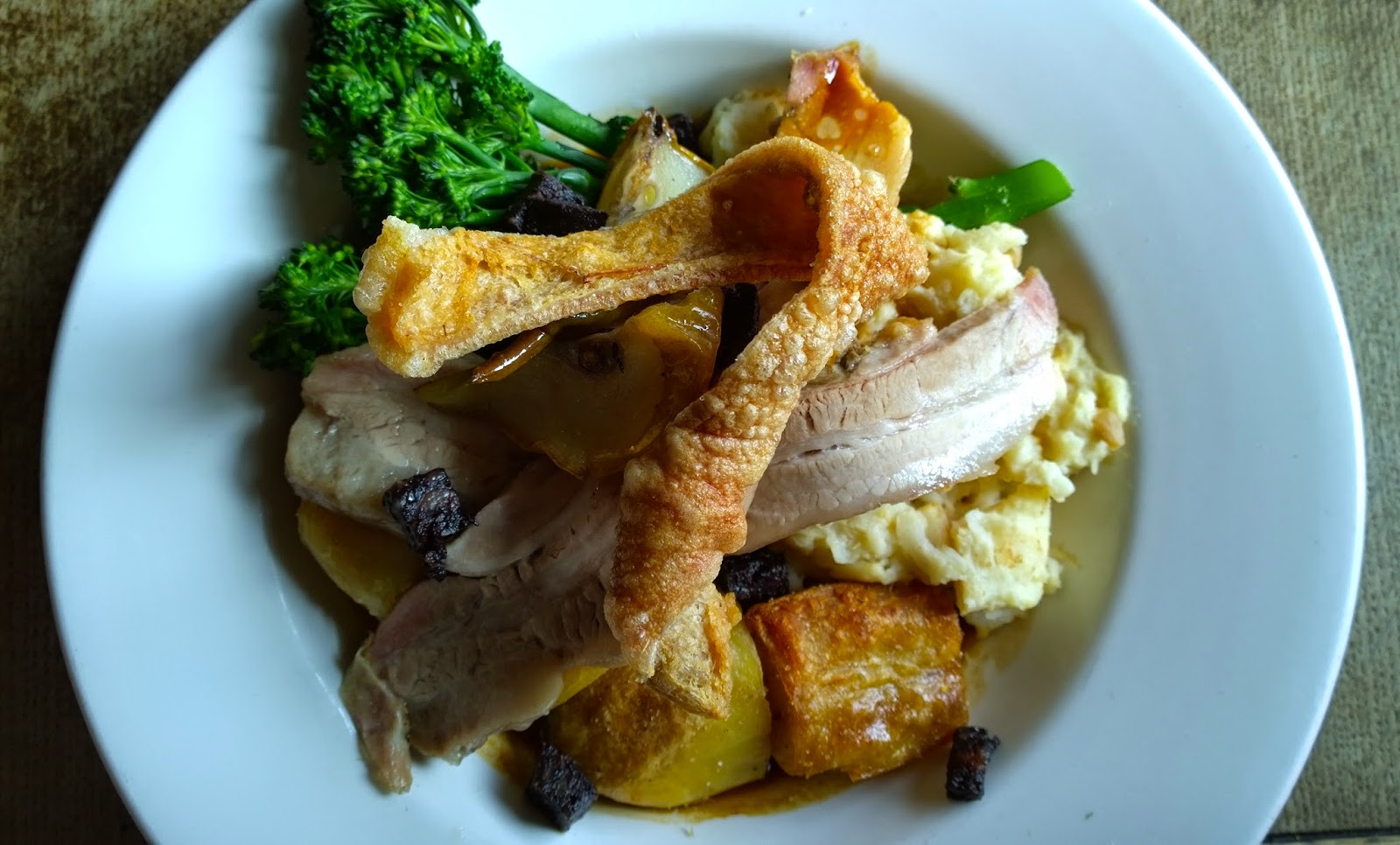 My mains could on face value be described as regular Sunday lunch fare but it was head and shoulders above the usual offering from our local pub. Sweet belly that again melted at the touch of a fork, nuggets of blood pudding, soft baked pear and crunchy spuds all made for very happy eating indeed. The crackling snapped with delight and the sprouting broccoli offered virtue but the best part of this dish for me, surprisingly, was the celeriac. God, I've missed that ugly son of gun and this was a timely reminder that root veg is firmly back on the agenda. I think I might just buy a few gnarly boulders on the next shopping trip actually. In short, for me, this plate heralded the start of Autumn. 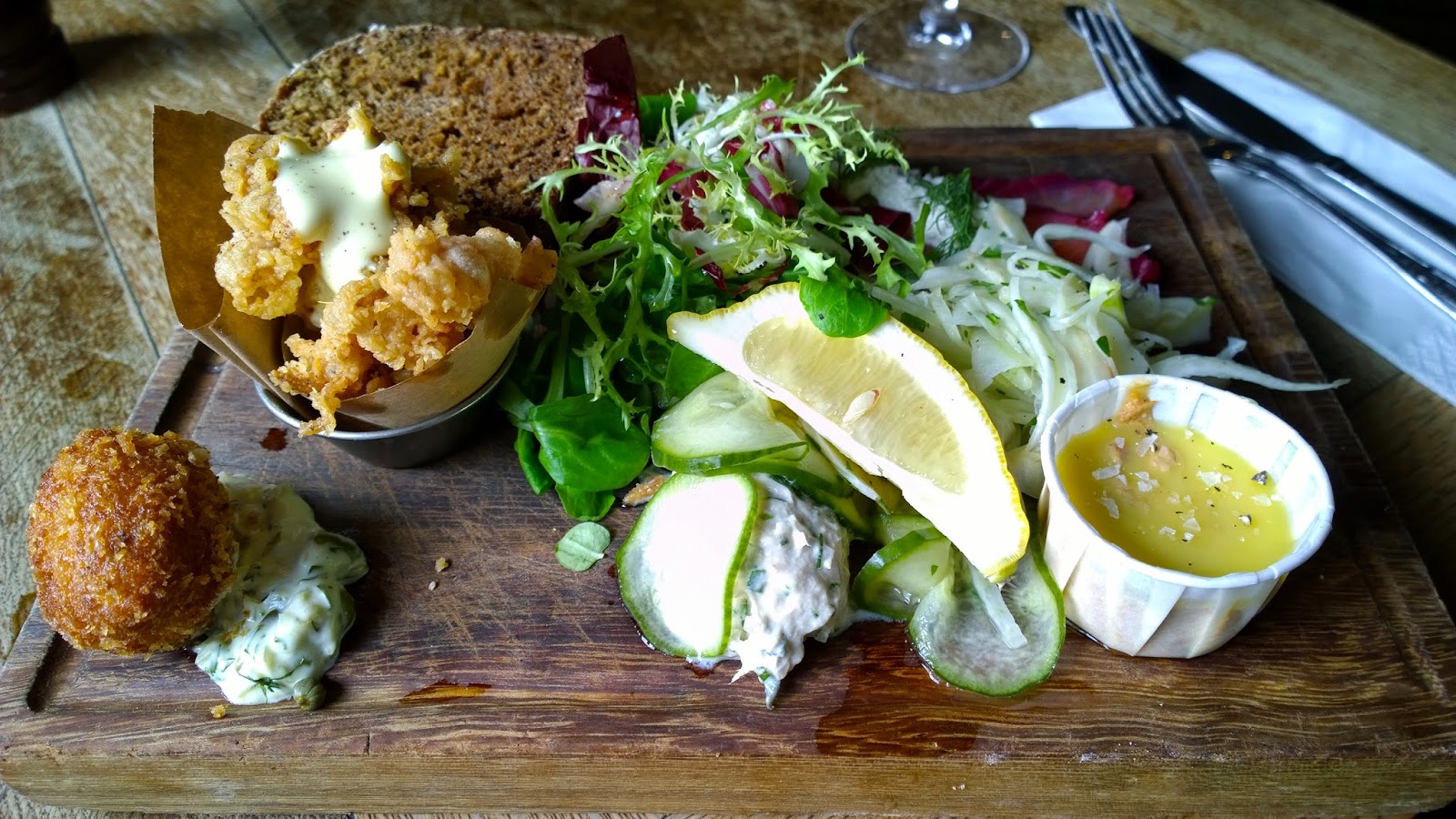 However, even though I thought my mains was really good, Mrs FU (in her humble opinion) decided that her fish platter evened up the scores, citing that her wooden board filled with gravalax, brown crab, mackerel pate, chipirones, haddock croquettes, fennel salad and *sharp intake of breath* treacle bread beat my Sunday standard well into submission. And sure, it looked pleasing but there was no way that it whipped my nutty celeriac mash. Apart from the potted crab. That did taste amazing and rich. And the fresh mackerel. The beetroot cured salmon wasn't bad either. But the rest was raaaahbish. Except for the croquette. The fennel, the fennel was shit. I am done with that aniseed claptrap. Until next week maybe. 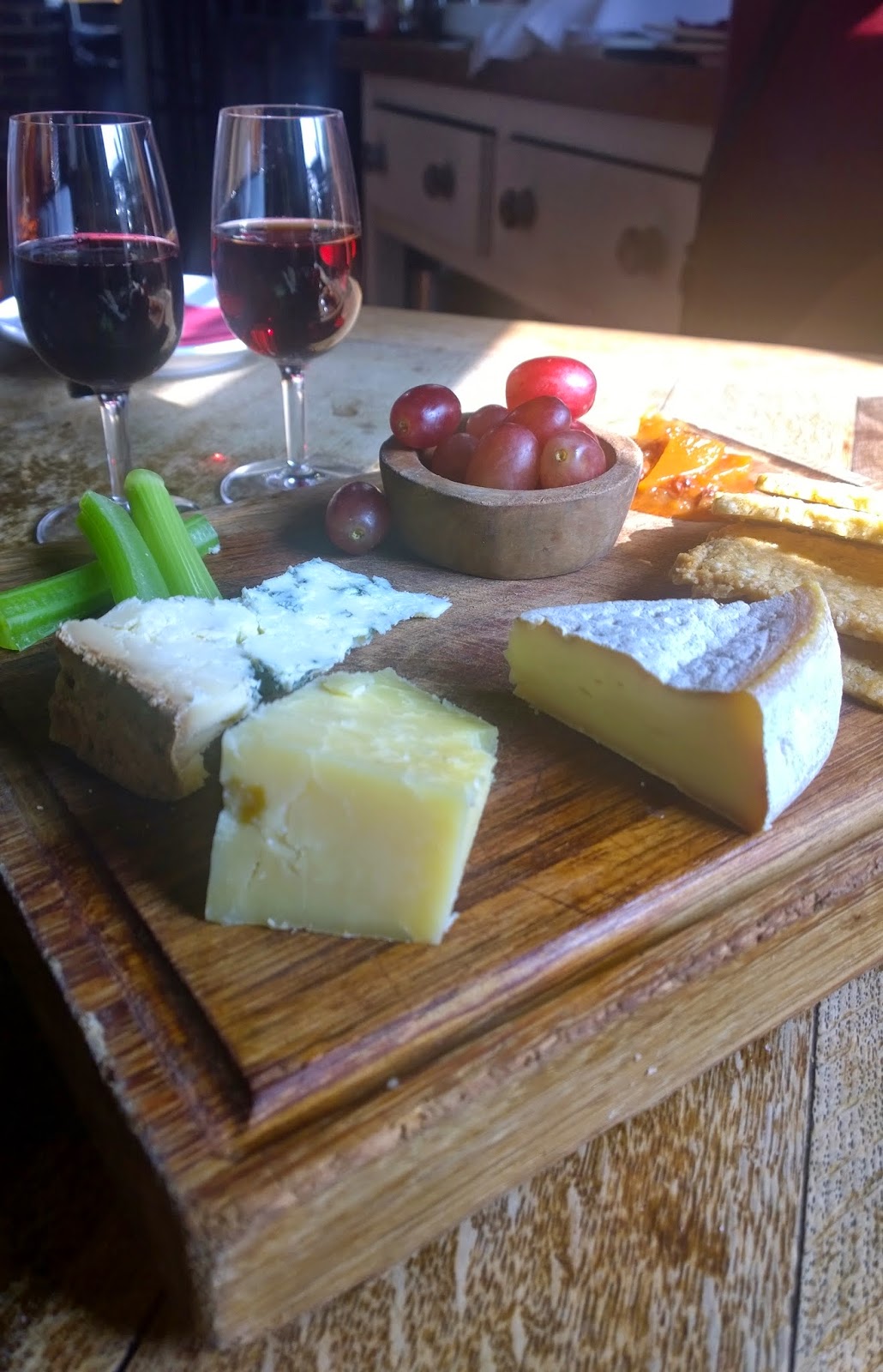 In hindsight, we should have left desserts well alone but as this was a special meal, we ploughed on regardless, deciding on a just light bite and digestif to finish things off. Namely cheese and port. From the small selection available we went for Stichelton, Keen's Cheddar and Reblochon, all of which were delightful. Although I felt the French cheese could have been just a touch more gooey. I am only nit-picking though, trying to proportion some element of blame. For by the time we'd finished, we felt thoroughly turgid. Joyful but definitely swollen.

As far as the actual cost of Sunday lunch, a bill of just over a hundred squids did edge things towards the expensive end, especially since we didn't have that much to drink. Honest, we really didn't (a few more pints and half a carafe of Picpoul). And I have to been mulling it over in my head ever since as to whether The Bull and Last represented value for money. I think they just about pulled it off. Their menu wouldn't look out of place in most decent boozers up and down the land but in the cooking and presentation, I would say that they do deliver that extra bit of care and attention. That fish platter was certainly a labour of love with all its elements and the service was charming and friendly. We had quite a giggle with our waiter at the end, belying some reports that the staff can be po-faced. And I really did like those pig cheeks with the watermelon. All one and half of them. No, I was more than satisfied with the meal we had there and you only live once and all that. Next year we are going to IKEA for meatballs.

BUT! If I did have to complain about one thing, it would be the fish eye mirror that hangs in their toilet upstairs. Jesus, it very nearly knock me for six when I stared into it after conducting my ablutions. I was so disorientated by the thing that after leaving, I started to wonder back up towards Hampstead Heath.

Thankfully Mrs FU was on hand to direct me down the hill, towards Kentish Town tube station. The stop that we should have gotten off at in the first place.
Labels: restaurant review writing

Not sure about the game terrine, don't get me wrong I love certain types of game but hate others, so I'd want to know what was in it. Looks like a fab lunch though mate. I have made a note of the place! cheers
23 September 2014 at 19:27