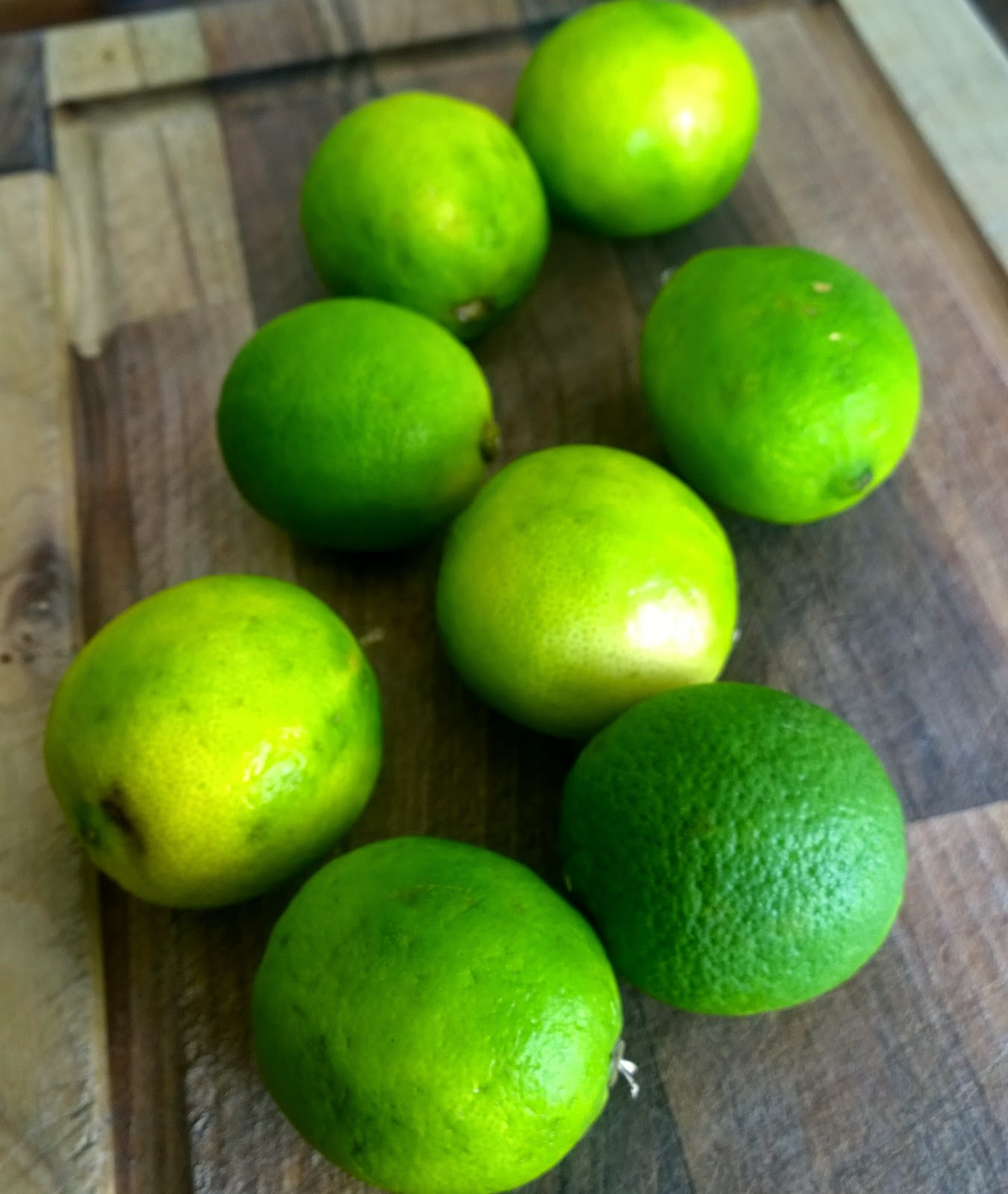 You know how the saying goes. When life hands you a bunch of lemons, then make lemonade. And if life gives you melons, well it could be worthwhile getting checked out to see if you are dyslexic or not. But what do you do when life chucks some limes your way?

This was the question I faced yesterday, as in my fridge I found 11, nay 12 limes that were just teetering on the edge of decay. Green but slowly turning to yellow and beginning to collapse inwards like a collection of dying citrus stars. Where they came from I do not know. People are always giving me shit. And I don't just mean that in the freeloading sense of the word or grief. Although I do get both of that too. No I mean people are always giving me shit to cook. Take last weekend for instance. I went to a house party where free colonic irrigation was on hand by means of home brewed beer and a friend wandered up to me with a plastic orange bucket, full of passion fruit that he had collected from his garden.

"Here you go Dan, thought you could do something with this lot."

"I dunno, you're meant to be the frigging cook."

And off he went, tutting along the way, making me feel all awkward and questioning my own credentials as a foodie (sorry, lover of food) so I called after him.

But it was too late, the moment was lost.

Coming back to the limes though, when I saw them languishing away, the old light bulb did ping up pretty much straight away. I decided that I would make some lime pickle with them.

Now for me, lime pickle is firmly planted in the category of 'Foods wot I never used to like but forced myself to like'. It has taken me years to get to the stage of dolloping a tangy thwack of flavour on my poppadom. Building up slowly, with much wincing along the way. The sourness isn't so much the problem but more the texture. A sliver of cold rind, peppered and congealed with oily, spiced mush takes some getting used to. But I have grown to love it.

So of course the next stage had to be to make some of my own, rather than rely on Mr Patak, and I was very happy with the results. Recipes vary and microwaving seems to come up a lot but I looked to my old faithful 'Asian Cookbook' to help guide me through proceedings. I got the book from WHSmiths ages and ages ago and it really has been a stalwart. I think it is out of print and I have messed around a bit with the recipe but this how I transformed a bunch of neglected fruit and turned them into a magnificent pickle.

Naturally, this probably shouldn't be considered as a 'definitive' method. I am sure some of the feedback will go along the lines of "Uh-uh. You forgot to do this, didn't do that, blah blah blah."

But the more I think about it, the more I reckon that this recipe could probably work with passion fruit too.

I wish I thought about it on Saturday.

Lime Pickle - makes about 750gms, or enough to fill a sterilised Kilner jar (you know, one that can hold about 750gms)

First cut each lime into 8 slices and arrange flat down onto a large plate and sprinkle liberally with salt. Put to one side and leave for about an hour (some methods cure for a lot lot longer but I was in a hurry).

Then place all your spices into a frying pan over a medium heat and lightly toast for 1-2 minutes. Put into a pestle and mortar and grind down to a fine powder.

Place a larger pan on the hob and add a tablespoon of oil and then add the chilli and garlic and ginger paste. Stir fry until golden and then add the limes, sugar, spices and remaining oil. Reduce the heat to produce a low simmer and gently cook for 15 minutes, stirring occasionally. Take off the heat and leave to cool slightly before pouring into said sterilised Kilner jar.

Cool completely and then store in the fridge until such time that you fancy some lime pickle. I expect to discover this batch in about oooh, six months time?

G said…
Looks good but why wouldn't you slice them up a bit more? Putting an 1/8 of a lime on a poppadom seems a bit much.

Food Urchin said…
G - In all honesty, that was the part I followed from the recipe book I mentioned. Think you are right.