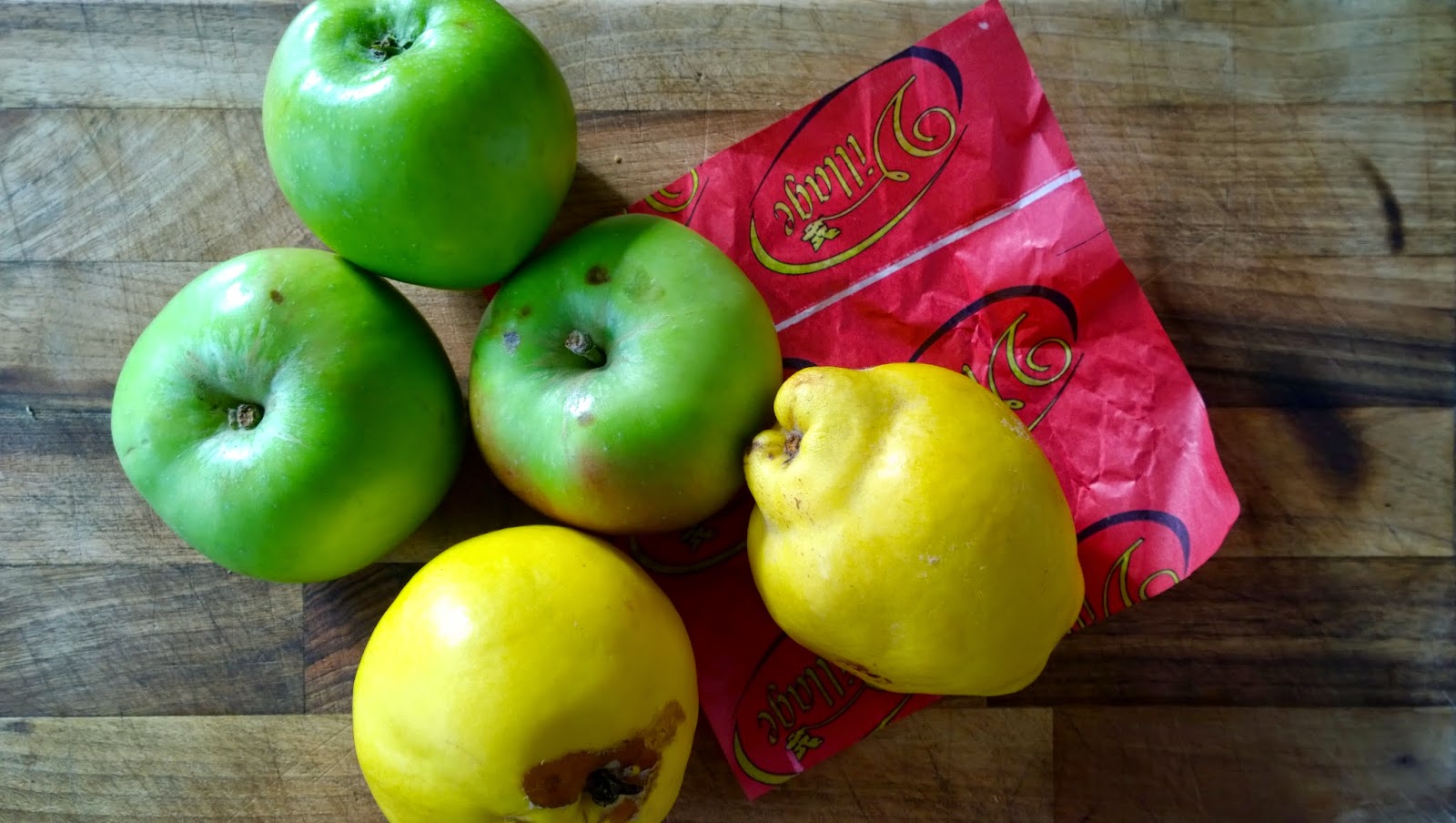 This post first appeared on the Great British Chefs blog.

By all accounts, I am not doing enough to make sure it snows around our way. Each morning, two pairs of eager eyes have been scanning the map on the telly, with ears listening to the dulcet tones of Carol Kirkwood, weather presenter for the BBC. And each time, demands have been issued that at the very least we should all move north, to where the snow is and then we could all play in the snow and not go to school. Apparently the sleet has been rubbish and it’s been far too cold to go outside (or walk to school) but if it did snow then they wouldn’t mind so much. Because well, it’s snow and snow is great. So Dad, why haven’t we had any snow yet?


Yes, this is the ongoing angst in our house at the moment and at this rate, I am thinking about going out to buy a snow machine (it would be cheaper than moving) but in the meantime, I have been doing my best to keep them quiet by shovelling suet based puddings into their little mouths. Such as good old fashioned apple and quince hats. 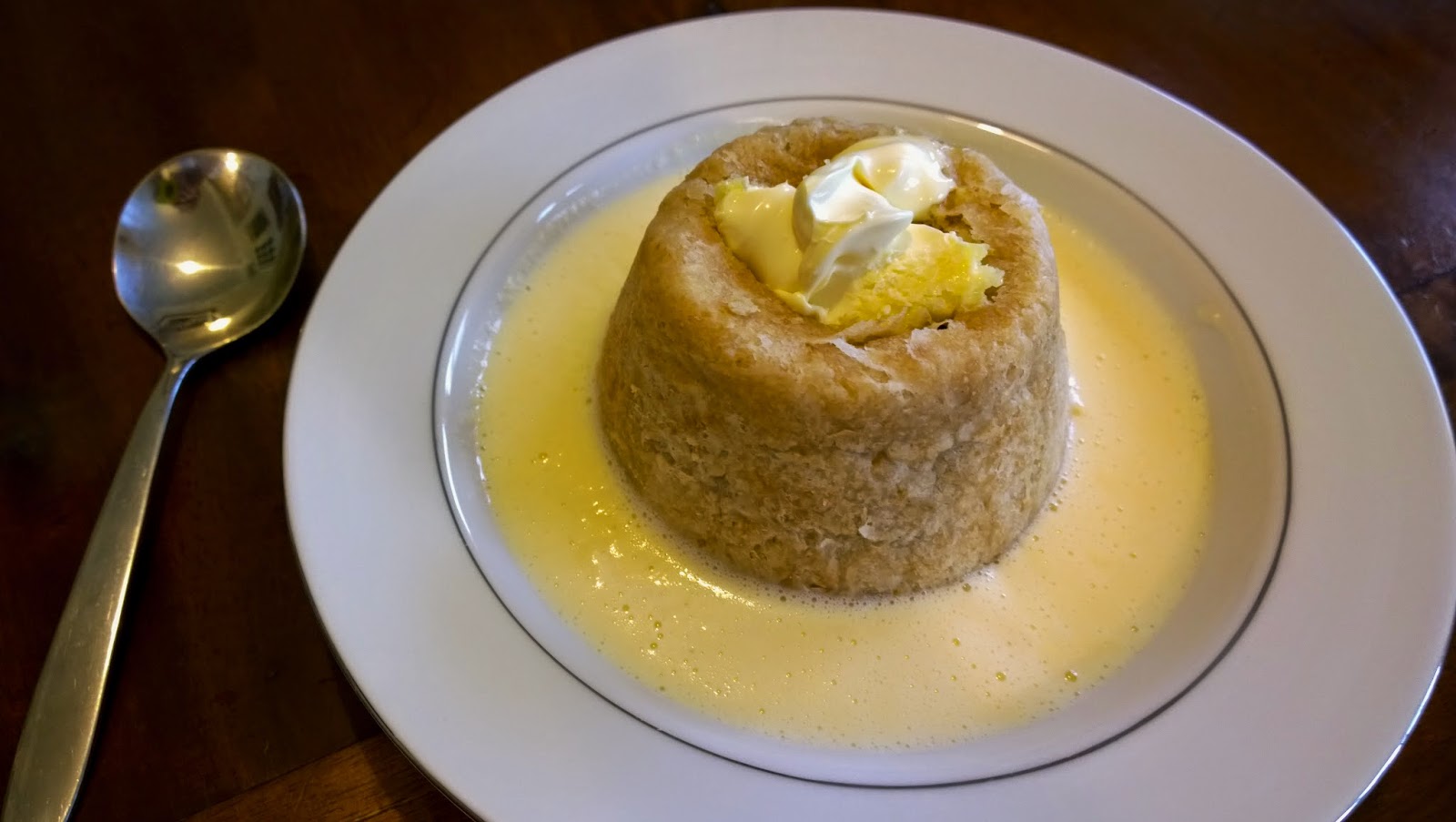 Curious surname for a dessert that - ‘hat’. We are all familiar with pies, crumbles, syllabubs, sponges, dicks and tarts but ‘hat’ does seem odd to me and to be honest I am not entirely sure what it means or where it comes from. I should do a bit of digging around and boost my knowledge of food history really.

Although, perhaps it’s because this pudding does indeed look like a hat. Yes, that’s probably it.

What I definitely do know is that these fat-laden, calorific puddings, spicy and succulent are a fantastic remedy to the prolonged barrage of healthy eating that normally occurs around this time of year. Quince can be tricky to find but seek one out if you can, as they lend a lovely aromatic quality to this pudding, which ties in nicely with the bay infused custard and I do like to make individual hats using mini-pudding basins. But you could always make this with a large basin if you like. The dollop of clotted cream on top might be a touch unnecessary, but what the hell, we’ve got to get through February yet. 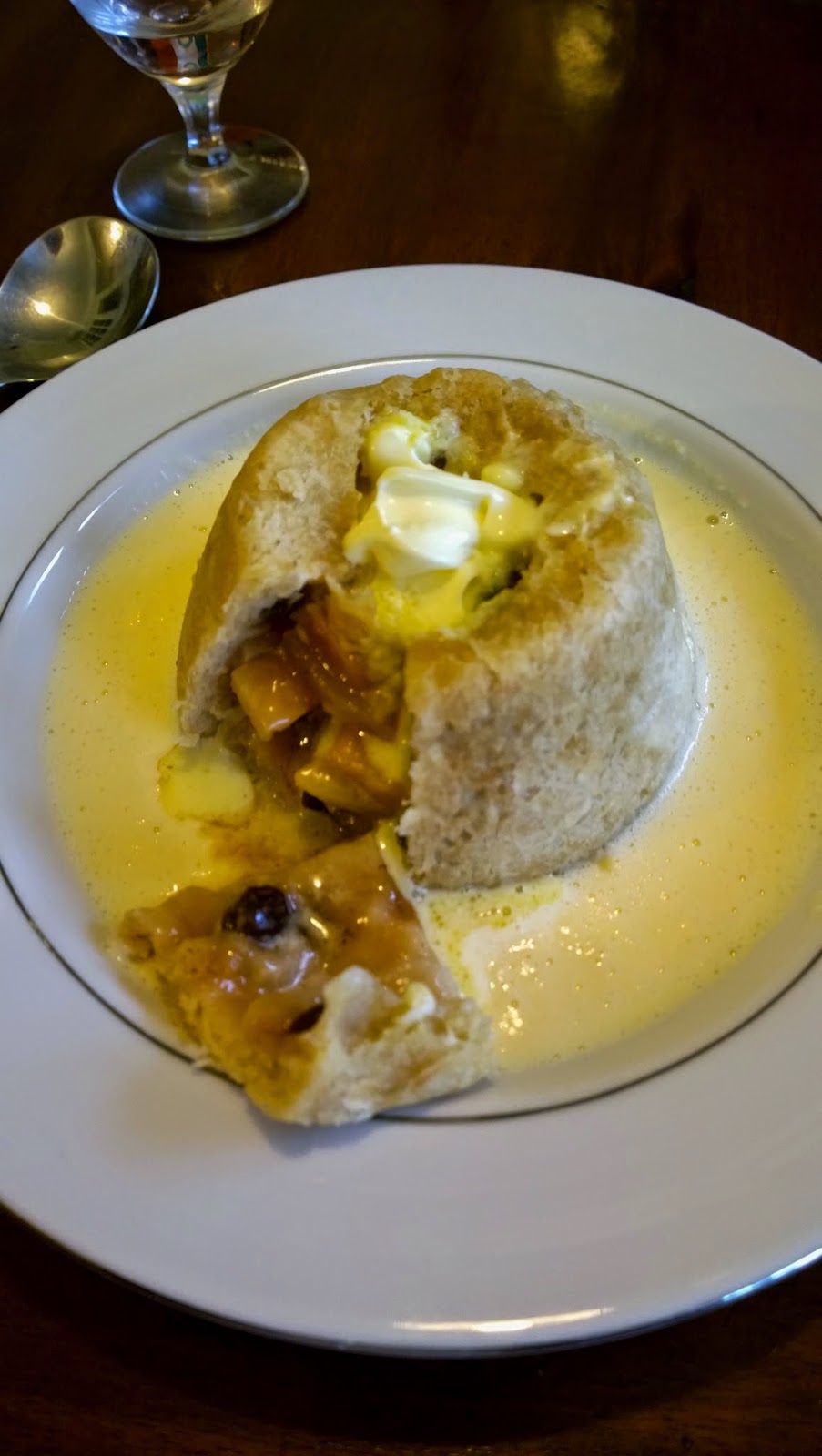 A treat to eat on a dreary, windswept winter day in other words; especially after going out for a long walk. And if it snows, even better. But don’t tell my children you’ve been out in it. 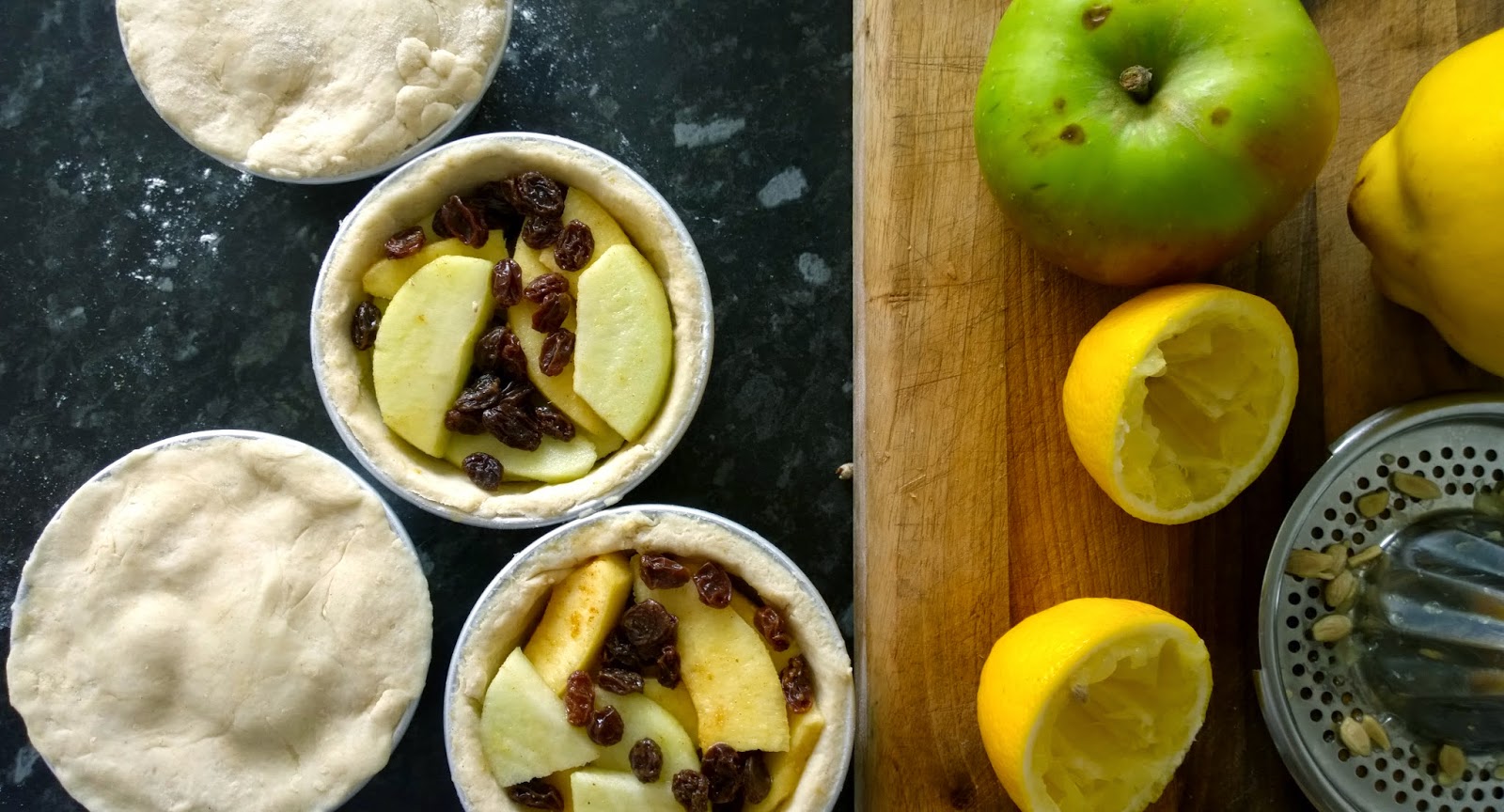 First, sieve the self-raising flour into a bowl along with a pinch of salt and then mix in the suet. Add the water, a little at a time and mix with your hand until it begins to form into a soft dough-like pastry that is not too sticky. 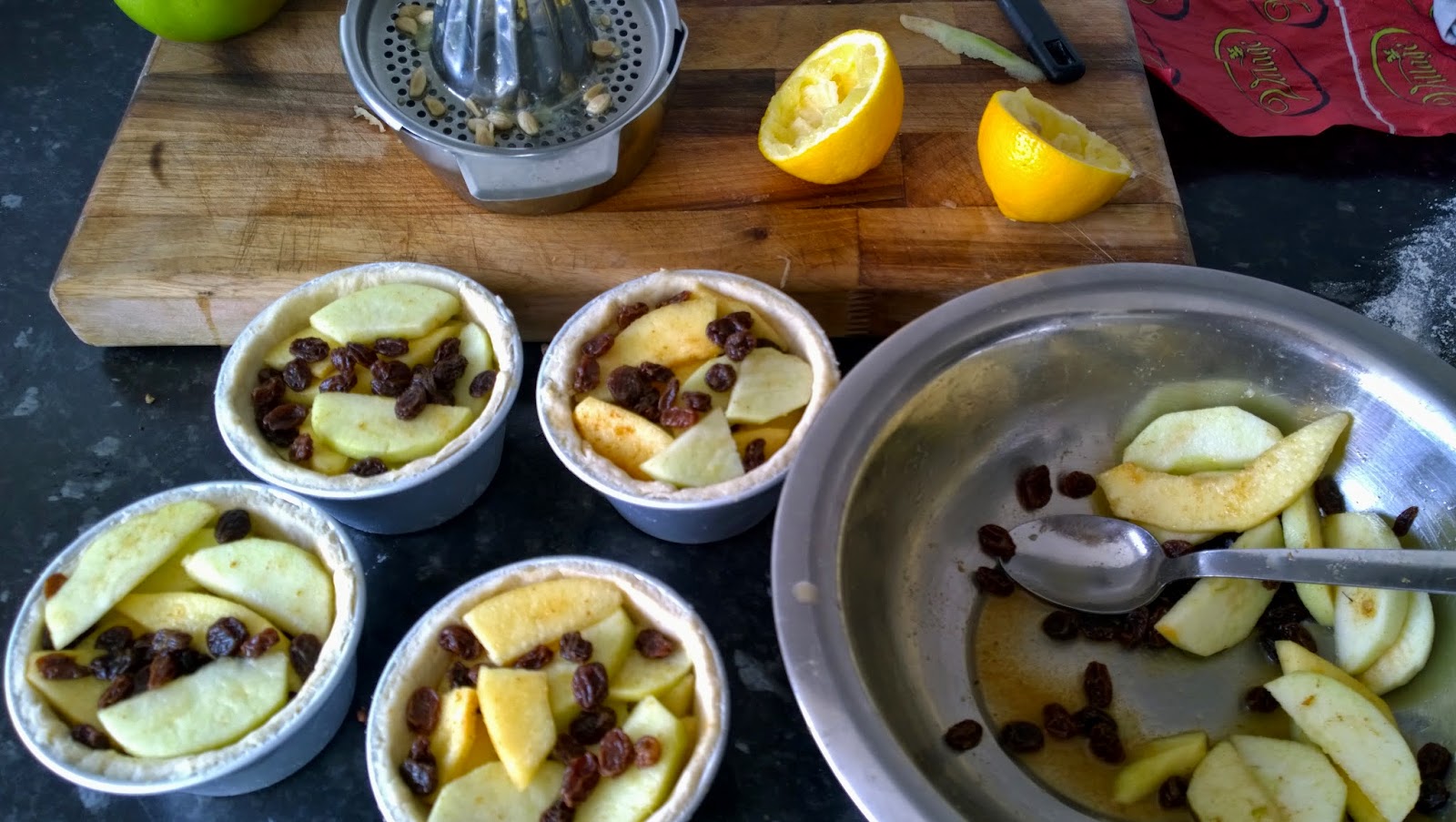 Dust your worktop with some flour and roll out the pastry so that you have a nice flat piece that is about 5mm thick. If using individual pudding basins, grease the insides with butter and then divide the suet pastry into four pieces. Line each basin with the pastry, pressing down and easing out any air pockets. You should have some of the pastry overlapping so trim that off and put to one side. Also keep these pieces separate as they will form the lids later. If using one large pudding basin, obviously keep your pastry intact when lining the basin.

Next core and peel both the Bramley apples and quince, quarter and then slice into moon shaped pieces. Not too thick, but not too thin either. Place in a bowl and dress with the lemon juice and then add the sultanas, sugar, cinnamon and ginger. Mix through so that the fruit is nicely covered.
Then place the apple and quince slices into each pudding basin, again pressing the pieces down and filling spaces with the sultanas. Pop in a clove into each filled basin and then take the leftover pastry, rolling each piece into a ball and with the rolling pin roll into a flat circle. Dampen the pastry with a smidgen of water and place the lids on top, pressing to seal and again, trim off any excess with a knife.

Double up some square sheets of foil (approximately 10 x 10 cm) and cover the puddings, wrapping the foil to seal. 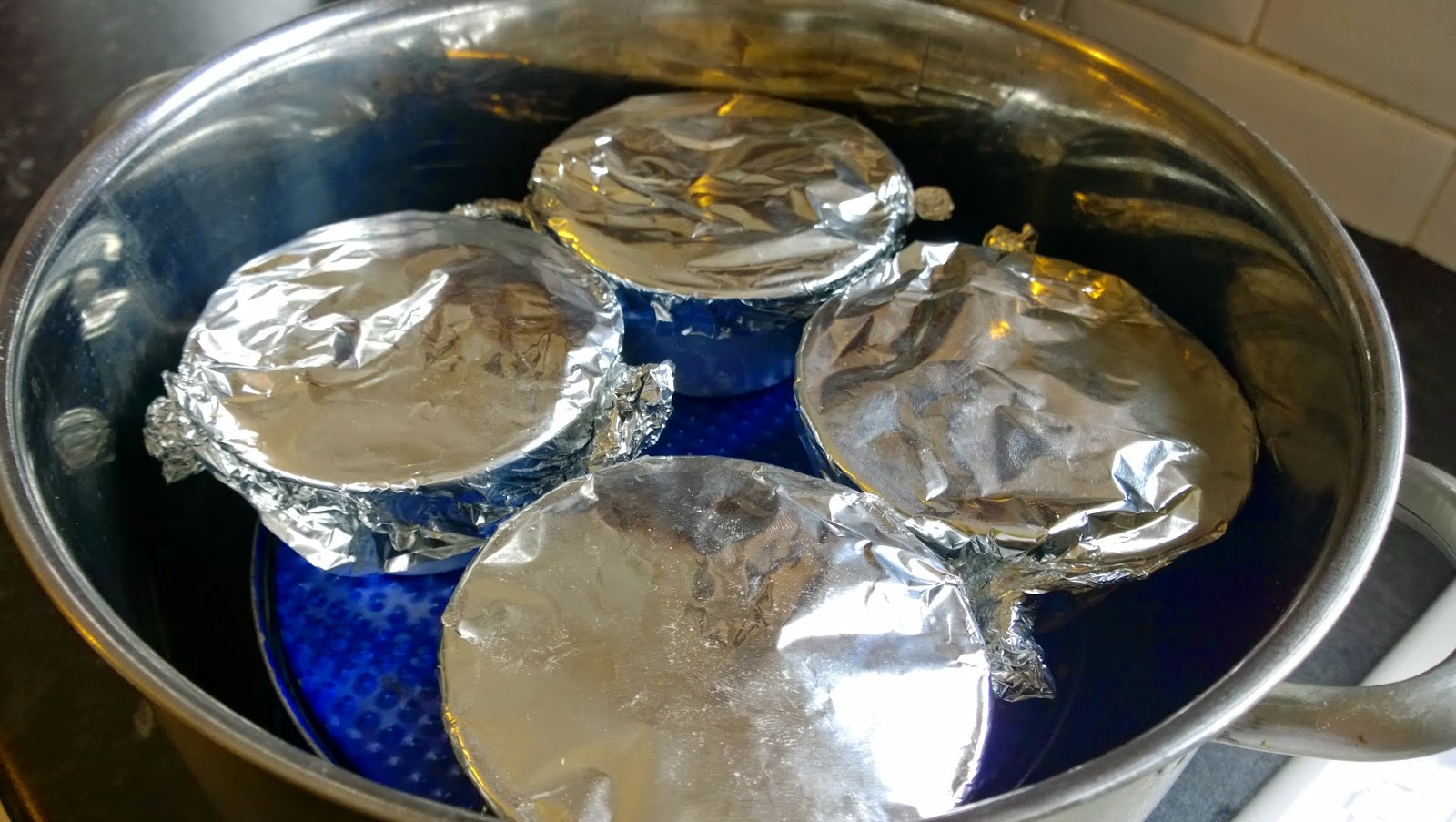 Take a large stock pot and place inside a smaller cake tin for the puddings to sit on and pour in some boiling water. Pop the puddings in, cover and stick on a medium heat on the hob to steam for 2 hours. Check every now and then to see if the water needs topping up.

Meanwhile, make your custard by beating the egg yolks and sugar together in a glass bowl until nicely blended and creamy. Then place the milk and bay leaves into a pan and bring to the boil.
Leave the milk and bay to infuse for half an hour. When the milk is ready, take out the bay leaves and place the bowl with the creamed eggs over a pan of hot water. Slowly pour the milk over the egg mixture, whisking as you do so. Keep whisking and slowly the sauce will begin to emulsify and thicken. A good test to see if your custard is ready, is to dip a wooden spoon into the custard. Run your finger through and if a line remains, it’s ready.

To serve, take the puddings out of the steamer and leave to cool slightly. Unwrap the foil and upturn the basin into a dessert bowl, give the bottom a little tap and remove. Your suet pudding should easily fall out.

Cut a small hole in the top and add a healthy spoonful of clotted cream and pour the hot bay custard around the outside.

Enjoy, but beware of that rogue clove though, that can be a touch too powerful when eating and will remind you of visiting the dentist. 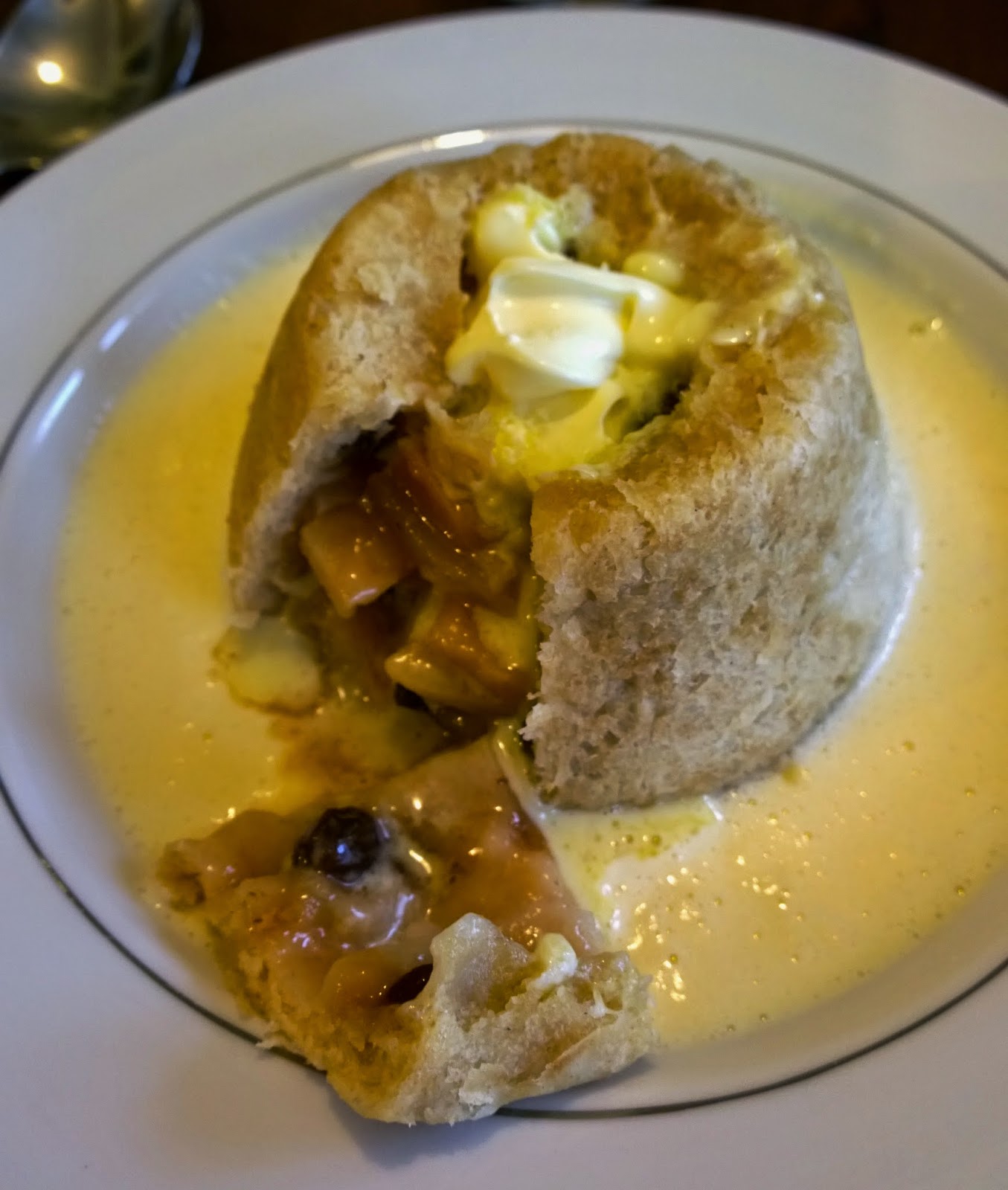 ferdiesfoodlab said…
That's a rather sumptuous looking little number!! I've got a little toffee custard in the fridge! I think you've just inspired me on what to make to go with it!!! : )