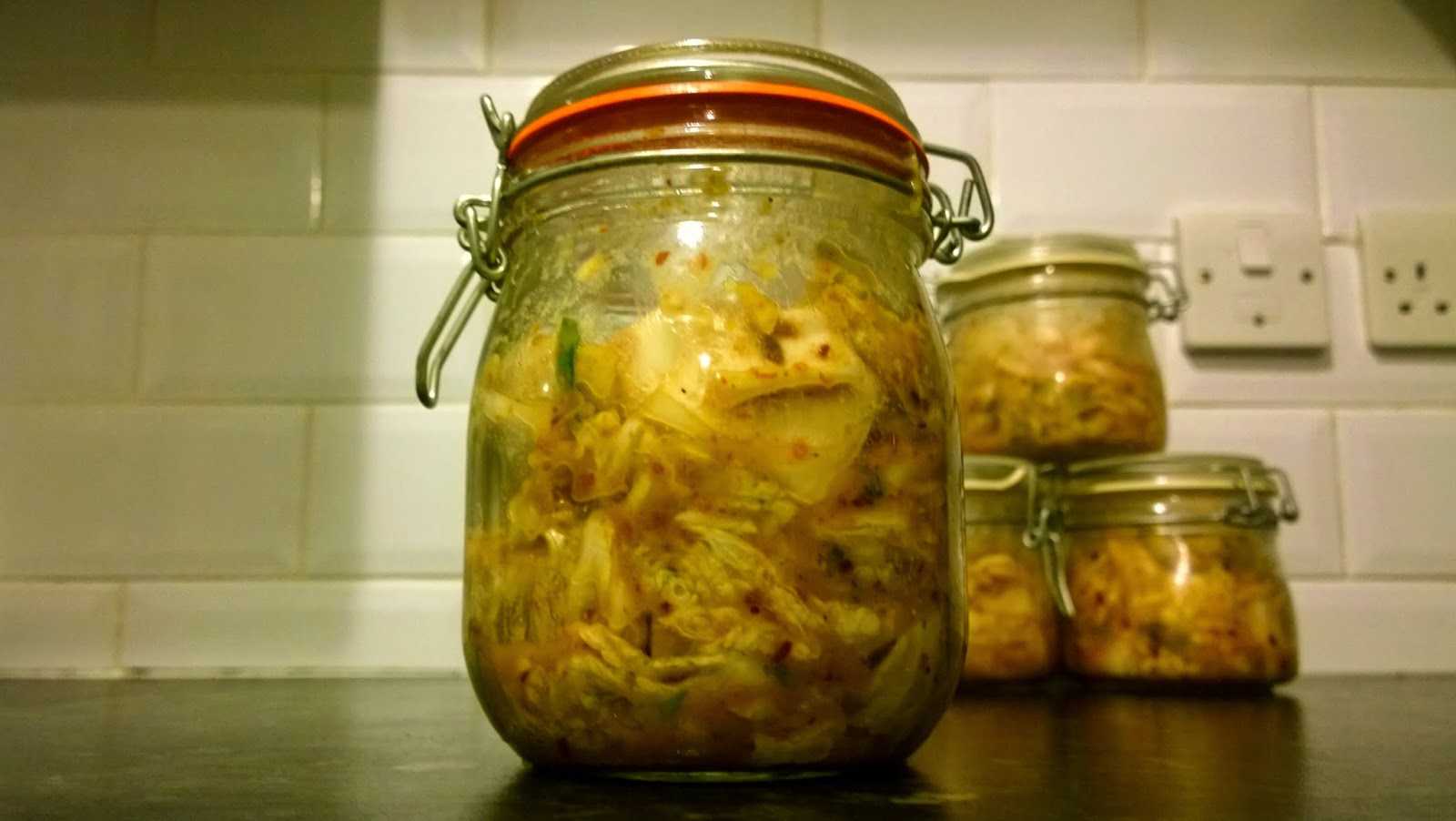 My fridge has been host to a variety of unusual foodstuffs and ingredients over the years. Bits of animal that you might not normally consume, exotic and erotic shaped vegetables grown under the sun, and cling film covered jars of viscous, jellified gloop; yes Freddie the fridge has seen it all. But I am not too sure that it has ever been home to anything quite so mysterious and volatile as kimchi. Now for the uninitiated, kimchi is a sort of pungent, fermented pickle that is sour and spicy and delivers a veritable kick to the old taste buds. Citizens of Korea have been living off kimchi for centuries as it forms a central and daily part of their cuisine. Boasting a high nutritional value, they eat the stuff by the bucket load and it is meant to be especially good for aiding digestion.

Typically made with cabbage, although lots of other different vegetables can be used, the other central component is gochugaru or Korean chilli flakes, which lend a bright red colour and fiery pokiness to the pickle. There are of course loads of variations of kimchi, depending on region and season, and even as I type this I am imagining some people are thinking - “OK Dan, tell us something we don’t already know.” Because Korean food is, pardon the pun, so damn hot right now. 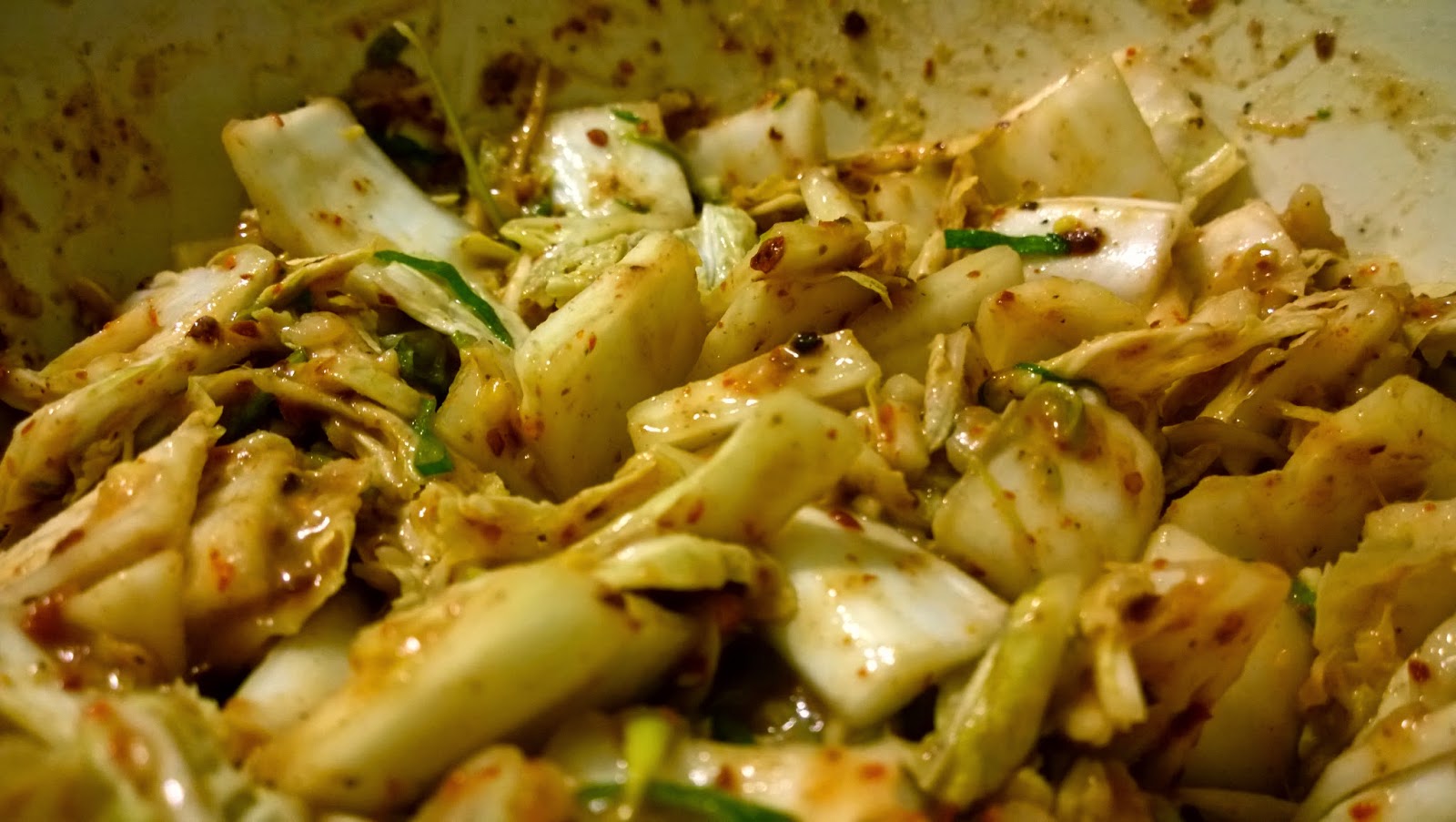 So wanting to get in on the action with some of this new, trendy, funky ingredient (which is funky in the most literal sense of the word) I decided to have a chat with food writer MiMi Aye, who explained to me over a bowl of noodles, the ins and outs of making it. By her account, the number one rule was to try and get the proper chilli flakes if you can. Standard Schwartz doesn’t really cut the mustard, nor do they deliver the inherent fruitness of Korean chilli flakes. Although Turkish red pepper flakes are apparently a good substitute if you can’t find them.

Rule number two was to free my mind with what I could actually do with the kimchi when it was ready. MiMi stressed keenly that it was very versatile and having researched on t’internet a ton of recipes, that really does seem to be the case. She followed up by suggesting that I should made a Budae-jjigae, or ‘Army Base stew’, which is very much a Korean-American fusion. But seeing as I have a repulsive aversion to Spam, I quickly binned that idea.

The third and most important rule was to leave it fermenting for at least two weeks, maybe longer, so that it has time to develop it’s signature flavour. “But beware,” she warned in a manner akin to Yoda from Star Wars. “You will need to release any gas that builds up, otherwise explode it could.” 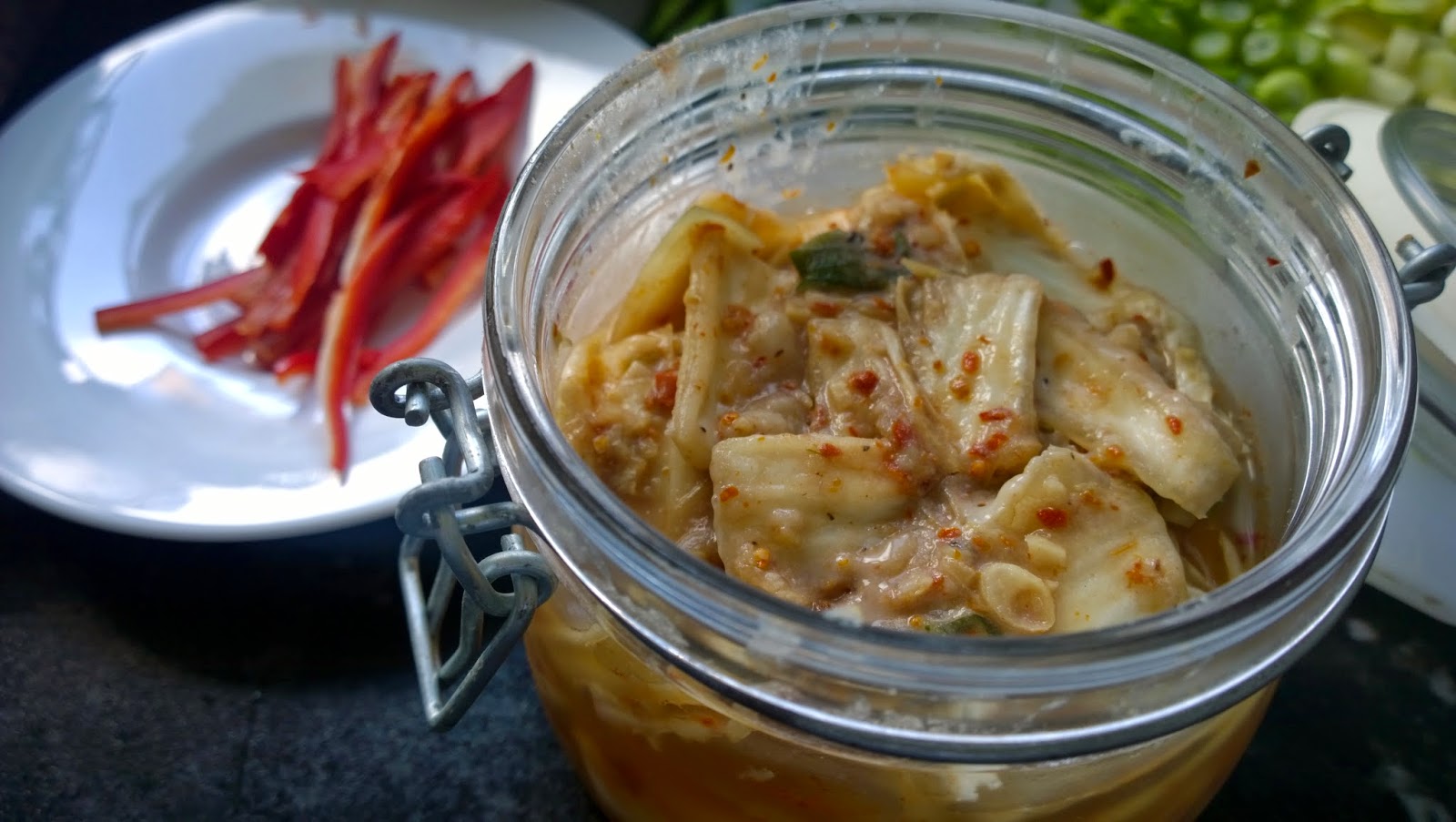 Which brings me back to the apprehensive vibe of dealing with kimchi, stored in glass jars and left in my fridge. Over the last fortnight opening the door has been dealt with the quiet precision of a bomb disposal expert. Wide eyes, framed and lit by the inner glow, have witnessed tiny bubbles fizzing upwards and almost on a daily basis, shaky, sausage-like fingers have popped open the lids, with a silent sigh often punching the air afterwards. A silent sigh often coming from the seat of my pants. 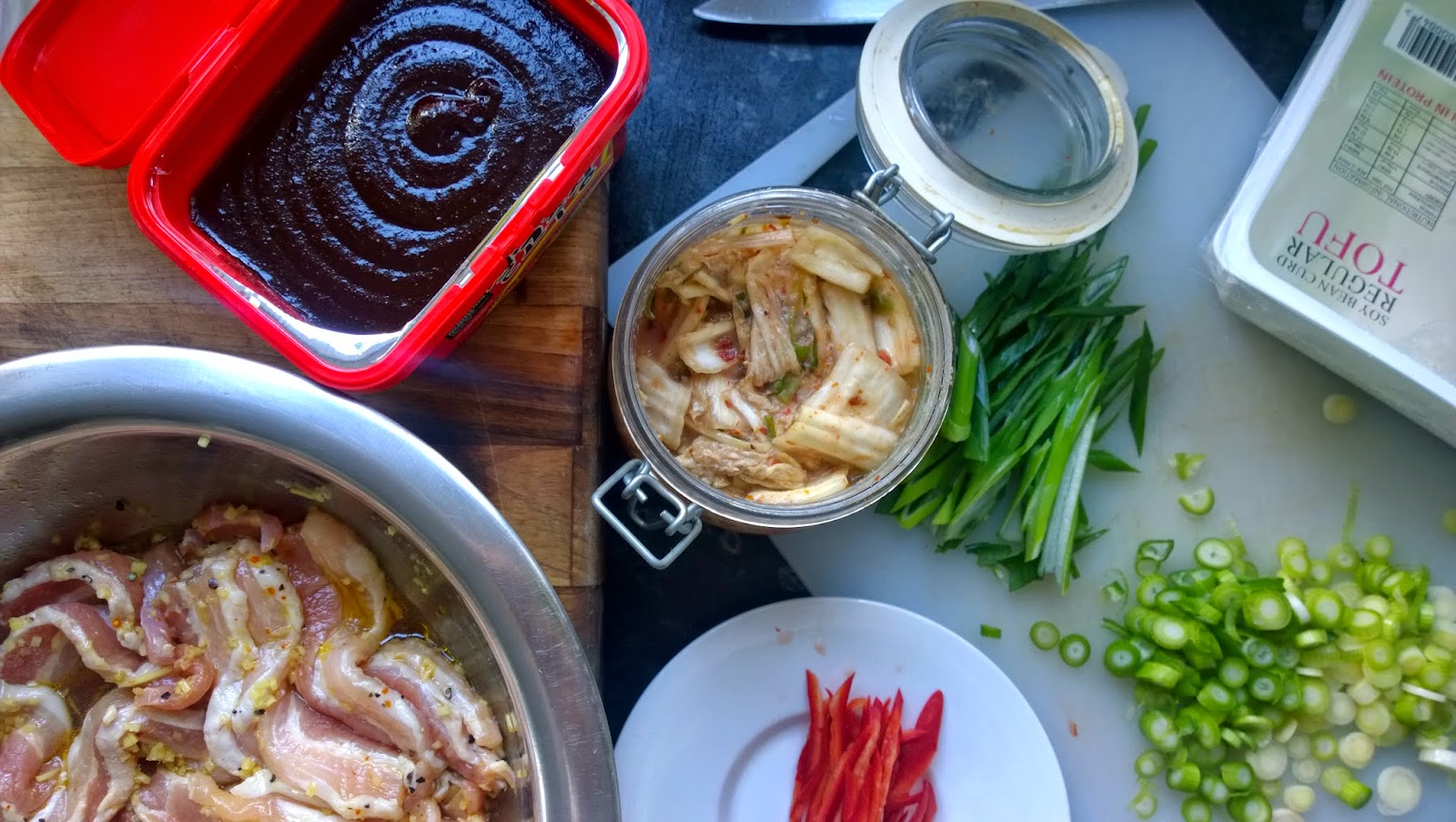 But it has been worth it. I used my kimchi to make a delicious stew recently, with slivers of pork belly and wibbly wobbly tofu, the recipe of which will follow. Interestingly, you can imagine that this would be the sort of dish that blows your head off but that really isn’t the case as the heat is more peppery, rather than chilli hot. And plus the sour cabbage sort of tempers and the balances out the overall flavour. Still good for a cold though.


For guidelines on making your own kimchi at home and to keep things short, I will refer you MiMi’s very easy to follow guide which can be found on her blog here. Although you could go to a Chinese supermarket and buy it ready made.

But then your journey wouldn’t be quite so thrilling now, would it. 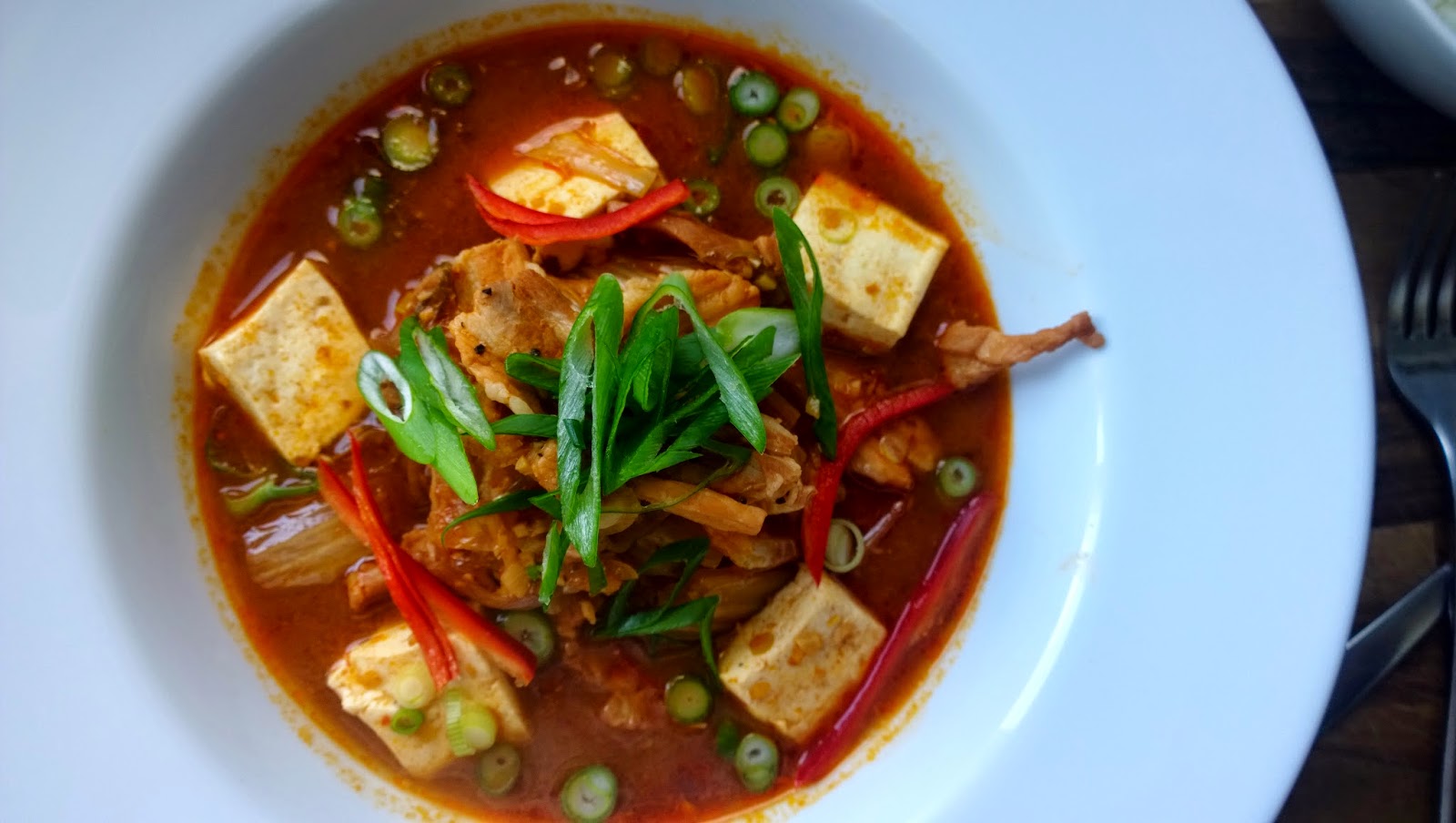 First marinate the pork belly by placing into a bowl and add the ginger, soy, rice wine, sugar and Korean chilli flakes. Mix together and leave on the side, covered, for 30 minutes.

Put a large pot or wok on the hob, over a high heat and add oil. Heat the oil up and then add the onion and quickly stir fry for 5 minutes until the slices soften. Then add the Korean pepper paste and again stir for a minute or so. Repeat steps by adding the pork, then the kimchi (along with any juice from the jar) and garlic and then finally add the water. Bring to the boil and then reduce the heat, cover and simmer gently for 30 minutes.

Whilst that is bubbling away, put your rice on to cook.

Just before serving, finally pop the tofu cubes into the pot, gently patting down into the stew and cook for another 5 minutes.

When ready, ladle the stew into deep bowls with an equal amount of pork belly, kimchi and tofu in each one. Scatter the spring onion whites and chilli slices all around and top with the shredded green part of the spring onion. Serve with bowls of white rice alongside. 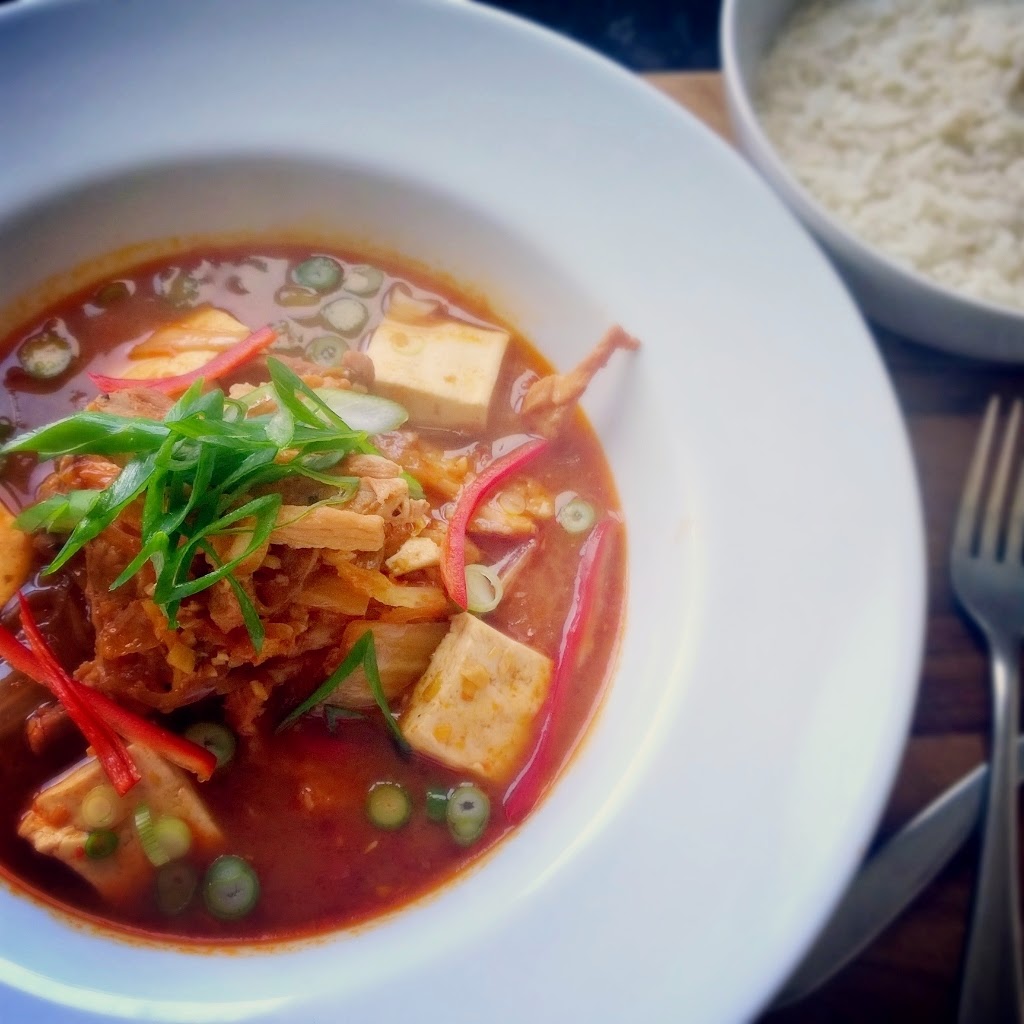