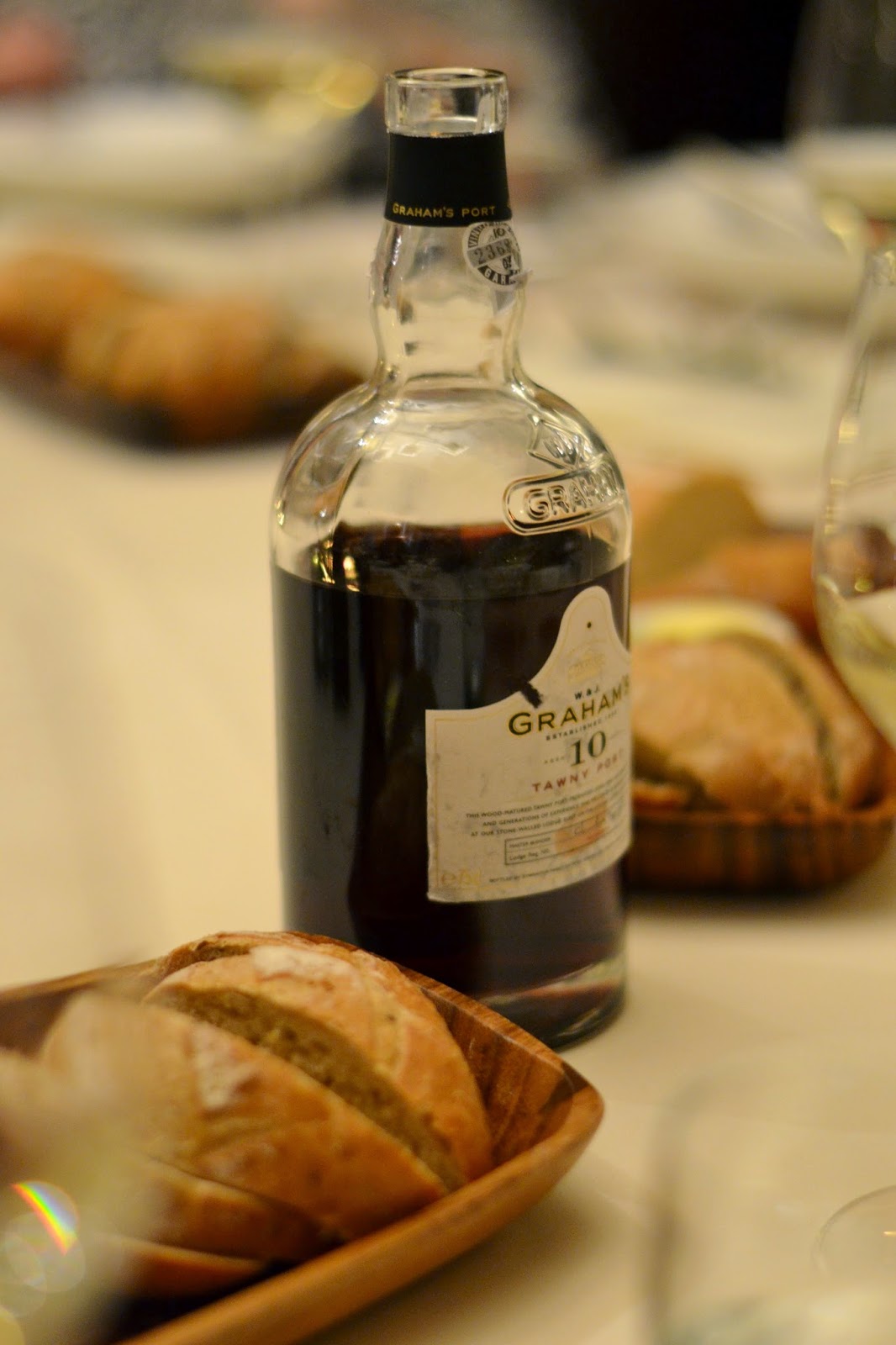 Give me a bottle of port, a dainty little crystal glass and a quiet corner of the room and you will make me a happy man. Give me a thick wedge of blue cheese too, like some Stilton, along with some crackers and whoosh, off into the sky I will go; up into an orbit of serene bliss. Off to another universe even, through a wormhole, like that mumbling American bloke from Interstellar. Falling downwards into a tesseract, unbounded by laws of physics, where only the rules of port and cheese apply. Floating alone, surrounded by crumbs, eyes closed, corners of my mouth curled upwards and crusted with purple.....matter.

However, beware. Try to take that bottle back and snap me out of that slumber, well let me just tell you now, get ready for a fight. For in the immortal and slightly abbreviated words of Charlton Heston, the only way you will get your port and cheese back is when you pry or take them from my cold, dead hands. As such, Christmas is always fraught with danger. I don't think anyone will ever forget the Boxing Day of 2003, when my fevered grip on a particularly fine LBV and truckle of Cropwell Bishop became so strong, that it took five members of my family to wrestle them from my grasp. I very nearly broke free too. But as I made my exit for the front door, all arms juggling and legs spinning wildly, my Nan took me out quickly by smashing a chair over the back of my head.

And that was the end of that.

Enough of that episode though, let's move swiftly on. The main point I am trying to make is that I am very much endeared towards both port and cheese. I love them in equal measure, yet I only really seem to partake in drinking and eating during the festive season and pair both in that singular combination. So the idea of attending a 5 course tasting menu event with Graham's Port, with each course complimented by a different port from their stable; now that sounded like a real leap into the unknown.

Held in The Rib Room at the Jumeirah Carlton Tower in Knightsbridge, the setting for the meal certainly had a traditional, old school and slightly dusty vibe, which at first seemed to be a backwards step for the inventive proposal of matching port to food. My initial thoughts were 'Hmm, lots of suits, leather and touch of cigar smoke in the air? Blaady hell, what have I landed myself in here?' And I half expected Rowley Birkin QC to leap out from nowhere and scream "GIBRALTAR!" in my face; before settling back down into an old Wessex club chair, proclaiming that he was very, very drunk. I suppose though for a company that is nearly 200 years old, ties to the past are going to be very strong and rightly so. In that context, The Rib Room, with its impeccable level of service, was an ideal place to showcase.

And innovation soon jumped quickly onto my lap anyway. In the shape of a Prêt-à-Port cocktail, made from Graham's 20 Years Old Tawny Port, Tanqueray gin, cinnamon syrup, fresh lemon juice and raspberry jam no less. I say onto my lap, I mean table. The waiter didn't chuck it into my lap, no and given that my mixological efforts with port have only gone as far as that old dear's favourite - "Port and lemon please luv!" - I have to say it was a real eye-opener. Refreshing, crisp, subtly spiced and fruity as you would expect, especially from the jam, this cocktail had a toe dipped in all seasons. I would suggest that all you bearded, bar monkeys out there to take note here; port cocktails could be the next new thing you know. But I suspect you have already been using the stuff for ages anyway.

For the main event, we were ushered into a private dining room where Joao Vasconcelos, marketing manager for Graham's Port and Symington Family Estates, gave us the run down on the lauded and revered history of port. The most intriguing account he regaled was how the relationship between Britain and Portugal was forged out of strife, war and a wanton necessity for booze. Way back when, when, as per usual, we were busy fighting the French, the surrender monkeys cut off supplies to our beloved vin de table by closing all their ports. So the Portuguese basically waved a flag from yonder and said "Coo-ee, look over here. We have lovely, lovely wine in our country. It's quite cheap you know. Looooook!" And so we did. We travelled over there, with our bulbous red noses and visited the Douro Valley and went "Huzzah!" But the main issue was transporting it back to Blighty, as the wine would usually spoil on the long journey home, over the deep blue briny sea. So the clever Portuguese fortified their wine with brandy, to make it more stable by stopping the fermentation process. And not to mention more alcoholic, which in turn raised an even bigger "HUZZAH!" from the Brits.

This of course is a truncated and possibly inaccurate version of Joao's story. There was plenty more about the history surrounding trade between both countries, with many merchants such as the Symington family making the decision to move across and set up business in Porto, to help develop the great vineyards of the Douro, the varieties of port and such forth, etc etc etc. But by that point, I was more tickled by the fact that the French are now accountable for drinking the majority of all port produced, as an aperitif.

"Ha!" How ironic!" I thought, as my tummy rumbled away.

Then the first course arrived in the shape of pan seared scallops, raisin puree, roasted cauliflower, white port sauce and that is when the real fun began.

Paired with a fine white port, lightly chilled, this really was an enlightening introduction that port could be drunk with food other than cheese. I have had white port before (with cheese!) and I made this clear to lots of people at the table but they were ambivalent to my wittering; focusing instead on the beautifully cooked, slightly underdone shellfish with sweet grape and sticky puree. Conversation disappeared out of sight for five minutes or so and when it returned, we all agreed that it was a spot on marriage of flavour. It could have been an overly saccharine dish in some ways but the dryness from the white port was great at cutting through it all.

The next course of seared foie gras with glazed free range pork belly and fig jus, paired with a 10 year old tawny, was also similar in its approach. Again chilled but the port was complex enough to handle the dense richness of the liver and soft, yielding pork. If I had to make a choice, I would single this tawny to be my favourite port of the night, even though there are three more to talk about. It really was delicious to drink.
Also, there was a suggestion from Joao that this port is versatile enough to be used with a variety of dishes and I could see that straight away. A cool bottle on a warm, summer evening in the garden would go down a treat. Especially with a banger or burger straight off the BBQ.

Only one bottle mind. Strewth, imagine what could happen with two?!

For the next round things got a little heavier and the LBV (or Late Bottle Vintage) that was poured was very much akin to what I am used to slurping at Christmas time. 'Ahh, LBV....what does that even mean?' I thought, flash-backing to hasty purchases on Christmas Eves and the aforementioned rioting. Well, it means that the port has been matured for 4 to 6 years in the barrel before bottling, which is pretty self-explanatory really. As a result, these ports are often full and fruity on the palate, with a long sweet finish.
That chef decided then to pair it up with two gorgeous slices of venison loin, rare and supremely succulent, was a great idea. The meat was perfectly cooked and an excellent accompaniment, as was the blackberry sauce. But I felt that the addition of a wedge of Stilton and slow cooked deer pie was a step too far and took the shine off things. Saying that, as the pie came around in a cast iron pot, I could have said no. But hey, cheese had just made an appearance. Cheese always goes with port, said my brain. So maybe more fool me for being so greedy then.

Dessert soon reared its very elegant head after that and the Cherry Bakewell crème brûlée, with dark chocolate sorbet really was sight to see. Decanted into a glass verrine, all pretty and delicate, it seemed a shame to have to smash into it with a spoon but I smash I did. I dived straight into that glorious pudding, whilst taking sips of another tawny, this one a 20 year old.

Throughout the evening, there had been murmurs from some of the others that they were getting a nutty flavour from some of their ports, yet it was only until I tried this one that I sort of got that. The almond in the dessert probably helped but as Joao pointed out, the longer a tawny spends in the barrel, slowly evaporating and with time spent exposed to oxygen, these are exactly the sort of conditions that lead to that particular flavour. So there you go. I must just have expensive tastes.

The final blow of the trumpet (or should that be blow-out?) had to be the ubiquitous slice of Stilton, with sticks of celery, truffle honey and walnut bread; served along with a last glug of some very nice Six Grapes Reserve Port, one of Graham's signature wines. Knowing that I was quaffing one of Winston Churchill's favourite ports did lend a certain pomp and ceremony to the end of the meal. Although I did start to worry about the 'pump' that I was feeling in my stomach.


However, signing off with Stilton was, in the words of talented Head chef Ian Rudge, truly the only way to go and this dark, velvety, ruby port slipped down oh so easily (fnar) and eased my concerns in no time at all. It was a proper digestif in other words. Without it, I am sure I would have trotted off into the night and exploded by the time I got to the bottom of Sloane Street. Like a bald, ginger Mr Creosote.
So at the end of this journey and given my previous predilection for scarfing port and cheese only at Christmas time, I suppose it remains for me to ask myself,  what did I learn from the whole experience?

Well, there is no doubt in my mind that port now needs (and I say needs with some urgency here) to be enjoyed and featured on the dinner table more often in our house and throughout the year. And it was the tawny port, both the 10 and the 20 years old that impressed me most, especially when it came to pairing with food. Yes, there are definitely some good prospects that lie ahead with this new found appreciation of port. No doubt about it

Bloody hell, birthdays, christenings and funerals will never be the same again.

I dined at The Rib Room, Jumeirah Carlton Tower as a guest of Graham's Port.