The Kitchen Is On Fire 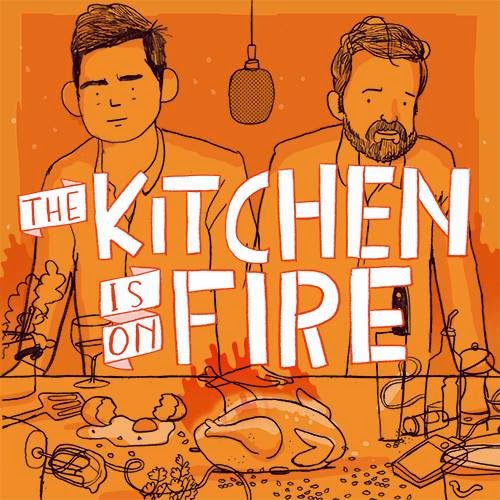 I took two whole weeks off for the school Easter holiday just recently. To indulge in some proper, decent and gloriously happy times. Time spent looking after my two wonderful children. And boy, did we have some fun. Running all the place. To the park. To the farm. To IKEA even! Oh that was such joy. Skipping, dancing and giggling along the arrowed byways of that celebrated Scandinavian store; all flat, efficient and anodyne.

Shouting too. There was so much shouting. Shouting from them. Shouting from me. Shouting to leave the LJUSNING alone! To stop jumping on the MORGEDAL! And to please put that fracking FRÄCK down! Fer gawds sakes!

This was on Day Two and to be honest, all I really remember about the holiday is lots of shouting.
Thankfully, I did get some respite for a couple of hours in that break, having been invited over to East London to do a podcast thingy with James Ramsden and Sam Herlihy.

I’ve never done one before but basic premise seemed to involve sitting around and talking bollocks for an hour or so whilst drinking wine. Which was great. The conversation or debate was hardly intellectual. It was all quite childish really and for that I seem to have got the blame. However, I suspect that James and Sam don't really need help in that department. It was laugh though and we covered a wide range of subjects. Recalling cooking pasta for Christopher Biggins. Dreams of owning a cheese shop occupied by mice in tubes. Wondering whatever happened to Toadfish Rebecchi from Neighbours. Hard hitting stuff like that.

Gushing parents who goo about their children on Facebook were mentioned too. And from all four quarters they were subjected to some tough, tough criticism. Or should that be three thirds?

We are all Dads by the way and we all love our children dearly. But you’ll never, ever see us gush.

Have a listen to the podcast here: Episode 26 – The Axe Man