Battling it out with Bertolli with Butter 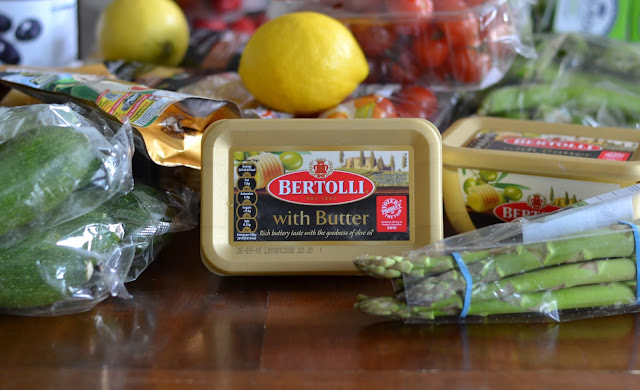 Should you ever find yourself traversing the pleasant lanes of the M25, just near Junction 27 and on the Essex side of the street, you can sometimes spot a rather large house on the hill. To the untrained eye, it looks fairly innocuous really but to those in the know; well, they will know that that house belongs to none other than Mr Rod Stewart himself, he of a gajillion sold records and countless leopard skin pants. I often find myself passing it. Normally quite slowly on that god-forbidden stretch of road and when I do, I always wonder if the sexy ol' gravel-throated gnome is at home and I ponder upon what he might be up to in there.

Is he in his basement studio, flitting on a stool, belting out Maggie May? Is he playing football, in the back garden, with his thirty children, all swathed in tartan? Or is he by the pool, Piña colada in hand and topping up his tan? Who knows. But judging by recent revelations, the one place in the house that he certainly won't be in, will be the kitchen. Oh no, his wife Penny Lancaster has put paid to all of that nonsense. Because as she attested on Loose Women a couple of weeks ago - "Cooking takes away a man's masculinity." And we can't have that happening to Rod now can we.

For cometh the day that Mr Stewart pulls out a potato peeler, that will indeed be a dark day for all us men. For our testicles will wither into dust, we shall lose the strength and know how to go hunting and slowly, as our minds deteriorate, all reason will be lost. To such an extent that sometime, in the near future, we will probably start considering something really daft. Like giving women the chance to vote. Or something.

OK, you can probably see my pennysworth is toeing the sarcastic line here but in this day and age, it does make me laugh when you hear these sort of statements. Antiquated, facile and unnecessarily vexatious are just some of the words I've gleaned from the thesaurus to describe my feelings on the matter. But speaking generally, when Penny says something like that in the meeja, she is doing two things. She is giving credence to a generation of blokes who actually believe that sort of thing. Whilst at the same time, she offends all the guys out there who do cook.

"HOW DARE SHE SAY MY ATTEMPTS AT VISCHYSSOISE ARE IN ANY WAY SHAPE OR FORM EMASCULATING!" I screamed in my pinny when I heard the news. It made me mad I tell you.

Of course, there is the third and more pressing issue of Penny perpetuating the patriarchy, letting down the sisterhood and striking a blow for equal rights but blimey, I am supposed to be writing a fun post based around a challenge set by Bertolli with Butter here. Eyes are probably reading this right now and thinking - 'Dan, we just wanted to see who came out trumps in the cooking stakes at home. Mum or Dad? Now get with the program!' 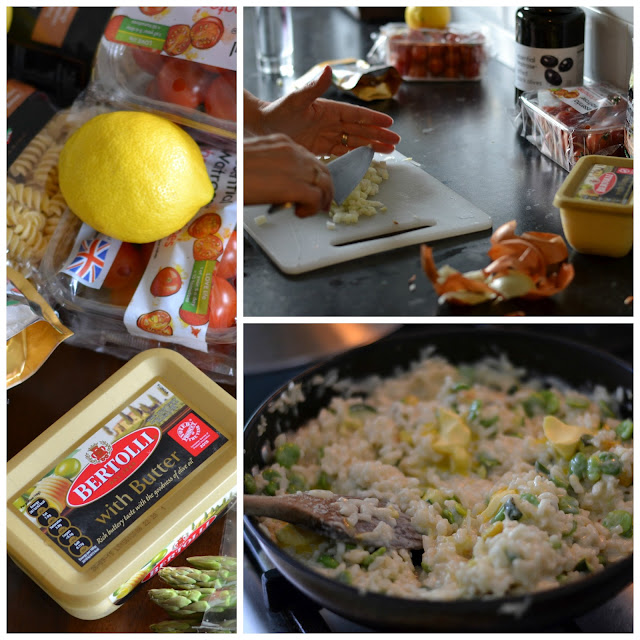 So yes! What's it all about Alfie? Well the challenge set by Bertolli with Butter was just that. They got in touch and asked if I, along with my wife, would be up for devising some quick and easy recipes using their product. And in light of the hoo-hah surrounding Penny's not so wise words, it was suggested that perhaps it would be fun to see who could come up with the best one. To test the myth, so to speak.

Given that Mrs FU and I are both wildly competitive and wildly opinionated about who is the best cook in the house, deciding who came up with the tastiest dish was always going to be fraught with danger. I am a terrible interferer when she is cooking and she is a terrible critic when I have finished. With that in mind then, we left the judging process down to our adorable twins. Who seemingly cannot be bribed, no matter how many sweets are put on the table.

Along with the Bertolli spread, a variety of ingredients were sent over for us to use, both doubled up for fairness and both approaches went down an Italian vein, as you might expect. Cooking concurrently over two nights, Mrs FU rustled up a pasta with tomatoes, courgette, pancetta, lemon and black olives and I created a refined risotto, using similar vegetables and a sprinkling of mint that is running riot in the garden. Working with the product itself was fairly straightforward for both of us, as we used it as we would use plain butter. I am a strong advocate of butter and rarely go in for 'spreads' but we found that the Bertolli with Butter worked well. Apart from the smooth finish, the spread added that Mediterranean touch from the olive oil, which ramped up the flavours in our dishes. Especially for the risotto when dotted around before serving and stirring through, to lend a silkiness at the end.

Like I said though, the final decision as to what dish worked best fell upon the small but broad shoulders of Isla and Finlay, whose verdicts were filmed and can be found below, with the recipes. And yes, Mum comes out best. But I am not bitter, as they were quite torn and rather sweetly, gave me a reassuring pat on the back afterwards; with a whispered "Don't worry, we liked your risotto too." I'll take that. Because by showing them that both of us can cook and by exploring different cuisines together, as we often do, at least they will grow up free of any misconceptions or 'myths' about who should be in the kitchen.

In the meantime, Penny can continue feeding her Rodney as much as she likes. Although it must get a bit tedious, having to puree all that food. 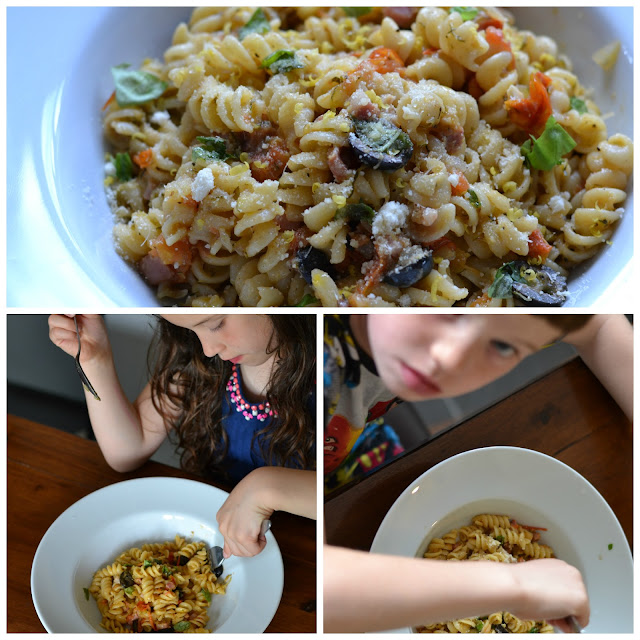 As I have already alluded before, when Mrs FU does the cooking I do have a tendency to stick my nose in and I did question the combination of anchovy and bacon as she went about her business. But apparently, a dose of fishy umami does the trick for any pasta dish. Rather than plain old salt. Or so I was informed, before being told to formally bugger off.

First, place a frying pan on the hob over a medium heat and melt the butter spread and then add the onion, garlic and anchovy. Stir until everything becomes soft and then add the pancetta, turning up the heat slightly to crisp  the bacon.

Whilst that is going on, fill up the kettle and put it on to boil (life is too short to boil water on the hob for pasta). Add your pasta and cook for 10 minutes or until it is al dente. Reserve some of the cooking water, say a tablespoon or two and then drain.

Finish the sauce by adding the courgette and tomatoes and cook through for five minutes and then add the olives to warm through for another minute or so.

Mix the pasta, sauce, some cracked black pepper and the reserved water together and serve up in bowls. Finish by scattering over the torn basil, lemon zest and Parmesan.

Lemon and mint risotto with broad beans, courgettes and Bertolli with Butter - serves 4

I think I got deducted points for this dish simply because it wasn't served up quite as quickly as the previous night. Which isn't fair, just because I like to take my time when extending my creative oeuvre all over the shop. Working conditions weren't that great either, as I had to listen to deafening  chants of "WHERE'S OUR DINNAH?" But what can I say, my wife is a cheat.

Start by placing a large saute pan on the hob over a medium heat and add the butter spread to melt. Then add the onion and garlic and stir for about 10 minutes until soft. Throw in the risotto rice and again stir so that everything is evenly coated and then pour in the wine and reduce until it is absorbed

Then start adding the stock, a ladle at a time so that it slowly sucks into the rice, stirring all the while to exercise the creamy starch out. The trick here by the way is to keep the stock warm in another saucepan on the hob.

Continue in this fashion for 10 minutes or so and you should be at the halfway mark and at this point you can add the emerald broad beans and diced courgette, then carry on with the meditative pouring of stock. After another 10 minutes, the rice should be ready. Test it to make sure. The grain should be soft with just a little nugget of whiteness in the middle.

When the rice is ready, add the mascarpone, the lemon zest, a pinch of salt and cracked black pepper and mix through. Dotted around the top of the risotto little blobs of the butter spread and cover and leave for 5 minutes. Then stir the melted butter spread in and add the mint at the last minute, stirring one last time.

To serve, spoon a generous portion into a deep bowl and add some more lemon slices for decoration or to squeeze. Should you want more....lemony flavour.

ginandcrumpets said…
Laughing so much at the twin's reviews of your meals! And I am also envious of their hammock
1 July 2015 at 21:23