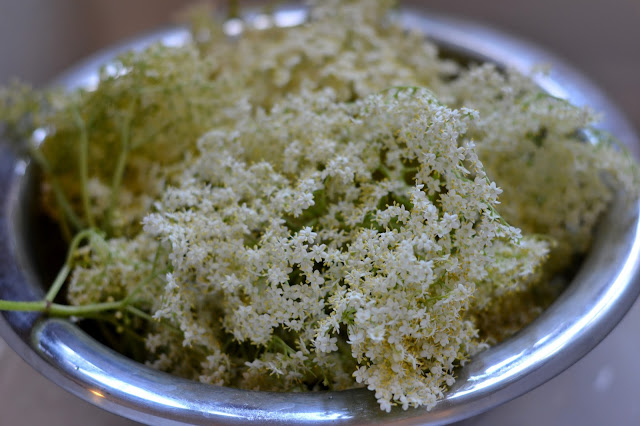 If you have never dipped your toe into the heady, rambunctious and sometimes sulfurous pool of home brewing before but have always fancied a go, I'd kick off your experimentation by making elderflower champagne if I were you. Because out of all the countless ways to convert simple 'matter' into booze, this has to be the easiest and quite possibly most impressive method of alcoholifrication, outside of prison hooch that is.

I am not talking here as a seasoned home brewer by the way. I have had some modest success with wine, port and marrow rum yes but my kitchen isn't awash with demijohns and bubbling air-locks. Nor do I have a mini mash tun and cooling coil sneaked away in the shed, pumping out gallons of Baz Vegas Otter IPA. Although that wouldn't be a bad idea. I am just talking from experience, having made this wonderful 'shampagne' a few times over the years. And every time, I have always been tickled pink by the transformation of this faintly cat piss smelling flower into light, evanescent fizz.

The biggest thumbs up came last year when I entered a bottle of the stuff into Siptemberfest, which is a small home brewing competition set up amongst friends. Ordinarily you are only allowed to submit really horrible beer, that has been lashed with yeast in an effort to pump up the volume, which in turn gives you the most foulest stinking farts the next day. However, the rules were relaxed in September and so I brought along a bottle of the stuff for people to sample. After every sip, eyebrows were raised in the kind of way that said - "Bugger, Danny has brought along something we can all actually drink."

Which was very pleasing and I very nearly won the coveted over-sized yellow felt jacket, that someone found in a charity shop. But instead I came second in our little tournament, losing out to an excellent chilli-flavoured lager and in hindsight, I shouldn't have scored it so high.

BECAUSE THEN I WOULD HAVE WON AND NOT LOST TO A GIRL!

(Damn you girls, and your impressive beer making abilities.)

Still, that I was able to turn a load of heads onto elderflower champagne is testimony in itself. Especially since it is not really that alcoholic, probably 2.. 3% tops, if left long enough. Yet when quenched ice cold, on a hot summer's day, there is nothing finer and you'll soon be reaching for that plastic lemonade bottle for another glass in no time.

Oh yes, make you sure you build up a collection of plastic bottles for when you strain and rack the fizz off, which will be four days tops after starting the process. Because everything is still fermenting, the build up of carbon dioxide will cause the bottles to expand and this is OK, I haven't had a plastic bottle burst on me yet. But I have had a glass one explode.

Recipes for elderflower champagne do vary slightly and yet in essence remain the same, so I normally rely on the advice of wild booze brewer and jack of all trades, the Other Andy Hamilton. This slightly abbreviated recipe can be found in his book Booze For Free and if I remember rightly, it's not even his to own, so I am sure it is good to share.

The elderflower tree is the giving tree after all.

You will also need a bucket that has been cleaned and sterilised.

First, pour the sugar into the bucket and heat up half the water (3 litres) on the hob in a large saucepan. Just before the water comes to the boil, take off the heat and pour over the sugar and stir until the sugar dissolves and then pour in the remaining 3 litres of water to cool. Then throw the elderflower heads in, with the lemon juice, lemon juice and slices and white wine vinegar  Mix together and then cover the bucket with a tea towel and leave in a quiet spot in the kitchen.

After a day or two, it should start to ferment and foam. Leave it for four days maximum and the strain off through a muslin and pour it into your plastic bottles that you have saved. Keep in the fridge for up to two months, checking every now and then on the size of the bottles. If they look dangerously swollen, just release a bit of gas to ease the pressure.

My elderflower shampagne is still a work in progress but once I have got it bottled, I shall ping up some more photos of the results.

OK, after giving out pearls of wisdom about using plastic bottles for elderflower champagne in case of explosions, glass splinters, killing the cat, blah blah blah, you can see from the photo below that I have seemingly rescinded on that sound advice. But the explanation is simple. You see, I had a collection of old soft drinks bottles all ready for decanting and yet when it came to finding the time to do so the other day, I was in a bit of a rush. Feverishly, I threw them into the sink and thought quickly to myself about sterilising them, before realising that we had no sterilising solution.

"We've run out of Milton!" I screamed to myself. Followed by "What to do? What to do?"

So, unwittingly, I filled the kettle up, boiled up some water to a fierce roll, poured the scorching hot liquid into the PLASTIC bottles aaaaaaand promptly melted everything.

That said, it is best that likes of I do these sorts of things, as a sort of public service to others. Ahem. I have now since procured some proper cleansing powder and I will never, ever do it again. Especiallt since I have another batch on the go. In the meantime, I shall be keeping a distant eye on these bottles. Because they were the only things I had to hand at the time.

Alicia Foodycat said…
I actually love that your dainty floral champagne lost to a GIRL making butch chilli beer. Striking a blow for feminism one second place at a time - well done Danny! I love the idea of this, but I'm with Dom... can't be bothered with the wait.
5 June 2015 at 10:21

Room for a radish said…
My mum and dad used to make this stuff when I was younger and it tasted amazing. It was very explosive though. They used old flip-top beer bottles, and several bottles from each batch would explode with great ferocity. Using plastic is probably a good move!
5 June 2015 at 11:40

G said…
I really need to get round to making this. Been meaning to for years.

Food Urchin said…
Sass - I was robbed! I SHOULD have won! Am making lots at the moment and experimenting with adding extra yeast. This could be a bad thing.

Alicia Foodycat - I know, I know. She kicked everyone's arses with her beer.

Aaron Turpin - I am very, very worried about this latest batch. I am thinking about sealing it in a cardboard box.