How To Eat Outside by Genevieve Taylor 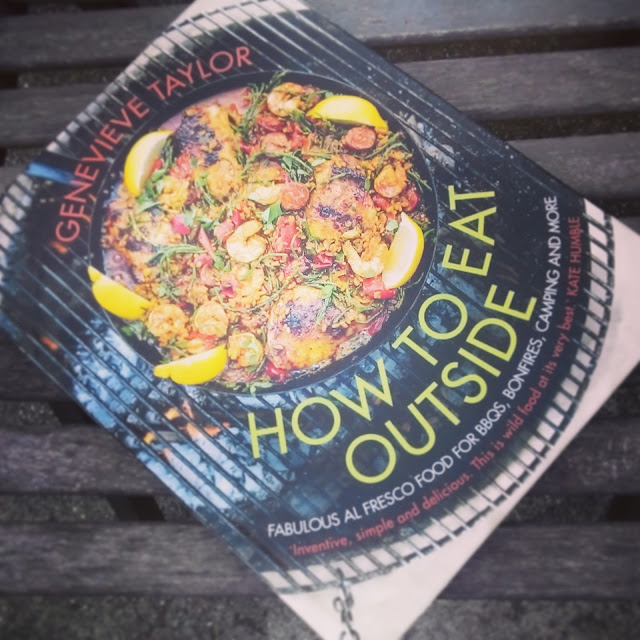 Now ordinarily, I would have a big problem with a book that tells me how to do to something. Especially a book that specifically sets out to show me how, just how to eat outside. Because I have been eating outside all my life. From since I was a wee nipper, pickernicking in Hyde Park, getting chased by geese, whilst holding a current bun in the air, screaming, to the amusement of my sadistic parents. Through to cooking with a Trangia at music festivals and squinting over the burner, to see if the methylated spirits were alight or not, and getting my eyebrows singed in the process. Finishing, if it's not too cold, with the almost weekly and somewhat spiritual building of a pyre in my very knackered and very rusty barbecue. Who is fast going the way of Betty.

In fact, as a practitioner of the gross method of eating on the hoof, ne'er a day goes by when I am not stuffing my mouth in the bright, wide, open air (I blame the surgence of street food for this). So what the hell could a book teach me, a Jedi knight of alfresco dining and masticating, about the subject of eating outside?

Well, quite a lot it seems.

When I received Genevieve Taylor's new book for review, which if you hadn't already guessed is called How To Eat Outside, I have to admit, the press release that accompanied it did make me smirk a little. Because billing itself as the 'ultimate bible' for outdoor cooking is quite a strong statement. There is a whole mountain of cookbooks out there on the subject and I often find that they all go down the same, well-worn track. Also included, was a shaky prediction that this summer was set to be one the warmest in decades. Which is the sort of marketing proclamation that makes us Michael Fish types go "Nah, don't say that. I am holidaying in Devon this year. Don't jinx it man."

Then I opened the book, had a flick through and scanned a generous amount of original ideas and recipes inside. Springing from the pages in no particular order were suggestions such as kiwi-marinated squid with chermoula, Middle Eastern lamb and date burgers, Thai prawn pot noodle (using your good old fashioned Thermos flask) and a mouthwatering bread and butter pudding with marmalade and chocolate. To achieve making the latter, that would warrant investing in one of those tripod BBQ's for fire pit cooking and showing the picture to Mrs FU may have clinched it. So happy days there.

However, to paraphrase Jerry Maguire, Genevieve had me at the suggestion of crisp butties for picnics. We all know that crisp sandwiches are bloody fantastic but for me, this was a great no-nonsense inclusion. Along with hard-boiled eggs, a simple ploughman's and a tin of tuna. In a world of stylised, over-wrought exhortations for anything to do with food, all wrapped in furry string and gingham (hello lifestyle people!) I really appreciated this ballsy, 'it ain't rocket science' approach and this theme runs through the whole book. It is quite obvious that Genevieve is also a full-time parent, so short cuts and quick tricks are very much the order of the day. Some may blanch at buying ready made ingredients such as jerk paste and utter "No waaay am I going to use Dunns River! Not when I've got these gorgeous scotch bonnets, yaah?"

But when you are frantically packing the car at five in the morning and your little one comes scuffling out onto the street with their jeans and pants around their ankles, asking for toilet roll, you are not going to give two fingers of fudge about authenticity. You just want to get on the road.

Permeating throughout all the instructions, stories and handsome pictures of food then, is this sense of simply going out to have fun and adventure in the great outdoors. And like I said, if you do have children, this is a great book to keep on hand, should you be mad enough to go camping this summer. All of her desserts will keep them quiet for ten minutes at least. Offering a safe but brief haven for when it more than likely pisses down with rain.

I am going camping on three separate occasions this year by the way.

The one recipe really sprung out for me though was her Campfire calzone pizzas. Giving a good nod to scouting efficiency when it comes to entertaining young minds, I tried this out with the twins last night and it went down a storm. After stoking up some flames and laying out our ingredients, all finesse went out the window and most of the toppings made their way into mouths before cooking. Yet in fairness, their smaller stuffed pizzas came out slightly better than my Big Daddy one, which was slightly undercooked when I unwrapped it. It really could have done with five minutes more but I was starving and after seeing their red, dappled mouths, I couldn't wait any longer to get stuck into my own slice of gooey mozzarella and spicy pepperoni. The greatest achievement though came afterwards, when my daughter shouted proudly over the garden fence to another little but equally loud voice next door, booming that she had just made pizza on the barbecue:

"We just cooked pizza on a BBQ!"

"Well, not really Schmicks," I whispered. "A lady called Genevieve showed us how to do it."

How To Eat Outside: Fabulous Al Fresco Food for BBQs, Bonfires, Camping and More is published by Bantam Press and hits the shelves on June 18th 2015.

And here is the recipe, given with kind permission from Genevieve Taylor and Bantam Press.

You will also need 6 large sheets of foil, lightly oiled on one side. 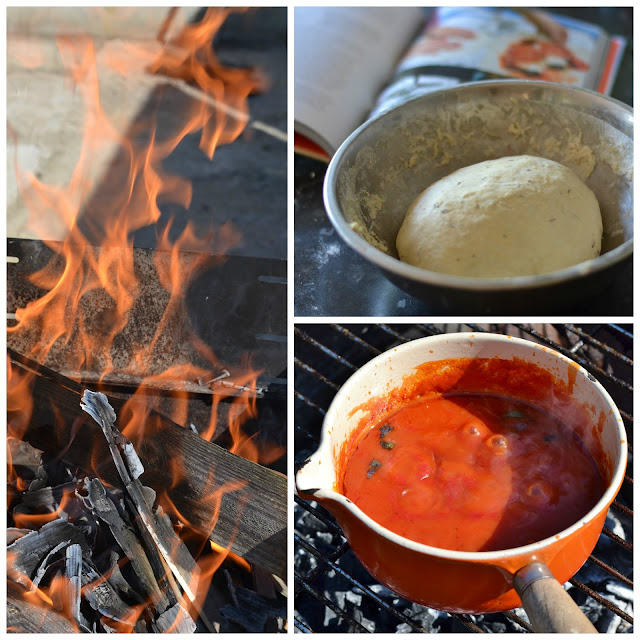 Drizzle a little oil on the worktop, spreading it around with your hands. Tip the dough on to it, then knead well until smooth and stretchy, about 5–8 minutes.

Cut the dough into 6 equal pieces, place each one in the centre of an oiled sheet of foil and loosely fold over the foil to enclose the dough. Pack away in a box with a lid, ready to transport to your cooking site. Get ready a selection of your chosen toppings and pack those away too. The dough will be quite happy at room temperature for a couple of hours; any longer and I would store it in the fridge.

When you are ready to cook, lay out the bowls of toppings, ideally on a camp table, and give the kids a package of dough each. Get them to press it out flat into a pizza shape, about 1cm thick. Spread a little passata on one half of each round, leaving a border around the edge, and then top with the mozzarella and whatever else you want. For each calzone, fold the dough in half over the filling and crimp all around the edges to seal the filling inside (as if you were making a pasty). 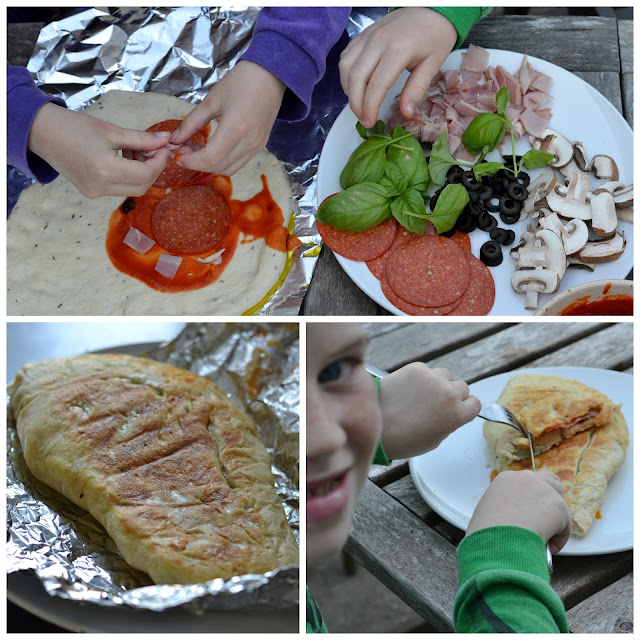 Loosely fold over the foil again, sealing it completely, and place on the grill over a medium-hot fire to cook, turning over every now and then. Depending on the heat of the fire, they will take around 20–30 minutes. Unfold one carefully to peek inside; it should be crisp and cooked through, not raw and doughy. If not, reseal and cook for another few minutes. Once ready, they will be scorching hot, so let them cool for a few minutes before tucking in. 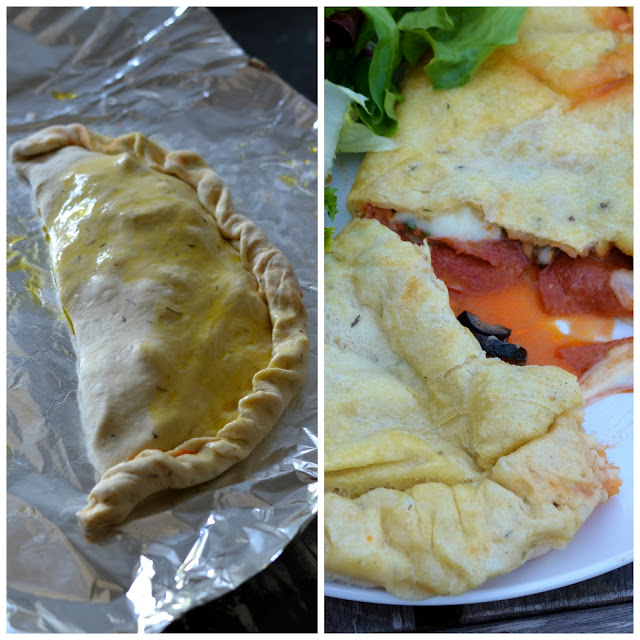 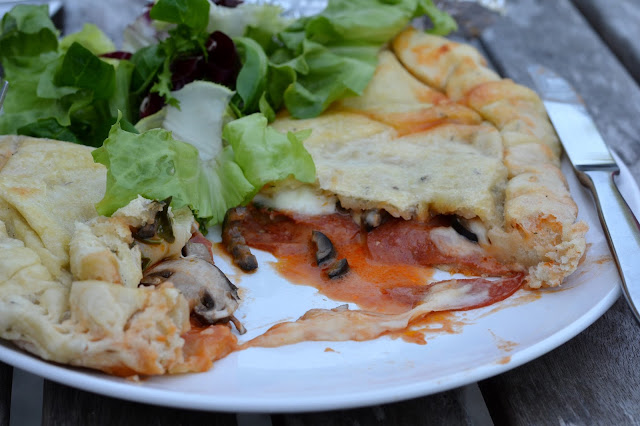