Meat Judging for the YBFs 2015

Apparently, there is no such thing as the 'meat sweats'. Listen to any scientist worth their salt and they will refute the condition, often giving you an alternative hypothesis that goes along the line of:

"No, you do not perspire excessively just because you have eaten gargantuan amounts of sausage and bacon. You sweat simply because you have most likely eaten far too much flesh, in a short space of time. Yes, I am well aware of the thermic effect of protein, the principle that digesting steak requires more energy than say, a stick of celery. Thus heating up the body, 'burning' calories. However, Dr Atkins was a quack and was over 20 stone when he died. Plus, it is very likely that you have also been drinking in the sun. Now, be off with you, and your hyperbolics about meat sweats."

Knowing this, I sort of agree. I've always thought that meat sweats were a bit of a myth. But after recently whaling through a great lump of charcuterie, along with some fine beef, pork belly, jerky, chicken, crackling and beer; all within the space of a few hours, well, now I am not so sure. I know I was fairly dripping after taking a nap on the sofa and when my wife walked in from work, she did a hell of a lot of sniffing and coughing, before finally spluttering "What the hell have you been eating? Dog food?"

So maybe meat sweats are real. Or maybe I should just take a shower more often. Whatever. The main reason for my sorry state was that earlier in the day, I had attended the meat judging session for this year's YBFs. Or Young British Foodies.

Set up in 2012 by Amy Thorne (founder of TASTE PR), food journalist Chloe Scott-Moncrieff and Lily Jones (founder of Lily Vanilli) the aim of the YBFs is seek out and celebrate all that is new and visionary in food and drink. Ranging from producers to bakers, to chefs and candlestick makers. That is candlesticks made from organic, heirloom, Cosmic Red carrots. So yes, the quirky can apply and so can the old. The word 'Yoof' in the title applies not in age but in the sense of one blossoming anew and with vigor, dazzling onto the scene. And I should know because I was up for the food writing category last year. Unfortunately, I lost out to Misti Traya, who is a highly original, witty and melodic sort of food writer. She is also American. But hey, I wasn't bitter. I just huffed out of the room that night, grabbed a fistful of salami, a bottle of Kamm and Sons and proceeded to give a piece of my mind to judge Marina O'Loughlin, in a shadowed corner of Tate Britain, where the awards ceremony is held.

It turned out, curiously, that I had picked on the wrong Marina, who is pictured above and strangely similar to the real Marina. In fact, her real name happened to be Astrid Chalupnik and she was only at the ceremony because she had been accidentally locked in the toilets on the second floor after closing and was let out after some screaming. She did agree with me though, that life is indeed a bitch and was more than happy to indulge and share in a swig or two of bittersweet botanical spirit with me. I don't think I will ever forget that woman. With her plump, dark, red lips and wandering tongue.

That was last year and this year's YBFs are fast approaching and by some twist of fate, I have been invited back into the fold. At first I thought it was to be as a judge, along with James George, Richard Turner and Neil Rankin, all three heavyweights in the world of meat in the UK. But yet again, it turned out that I got the wrong end of the stick. My role at this year's selection process was merely to act as witness to events, a role that I initially had some misgivings about. Then a giant called Neil contacted me and said "Dan, there will be shitloads to get through, you'll love it." So I replied with the nonchalant and slightly Prima donna response of "OK, I'll do it."

I am glad I did because it was great afternoon. An orgy of tasting, cogitating and deliberating. It was an also eye-opener more than anything else, as eyebrows were raised at several points in the proceedings, with more than the occasional, furtive glance shot across the table. A just painted table, that left us all with white elbows by the way. In my capacity as independent meat observer, I would say that all five entrants gave the judges some serious food for thought, particularly from an entrepreneurial point of view. The judges do have plenty of fingers in plenty of pies after all, and it wouldn't have surprised me if one of them had piped up with an offer of £30K for a 75% stake in the business. Like that Peter Jones from Dragons Den.

The presentations themselves varied in scope and delivery. Some people expounded at length, showing off their knowledge and expertise. Some brought videos and pamphlets. Some just bashfully preferred to let their product do all the talking. Underling throughout the whole session though, was a strong sense of passion, belief and commitment and it was plainly obvious that all five entrants, live and breathe meat. Which must be a very hard thing to do.

It was definitely tough for the judges to come up with a winner but they got there in the end and as Supreme Court Meat Ombudsman overlooking everything, I do indeed know the end result. But that is all I can offer at this stage. No more, no less.

Except to say this. They ALL gave me the meat sweats. Good luck for September 15th everyone!

Below is photographic compilation of the session, complete with a brief and pithy repartee for each entrant. 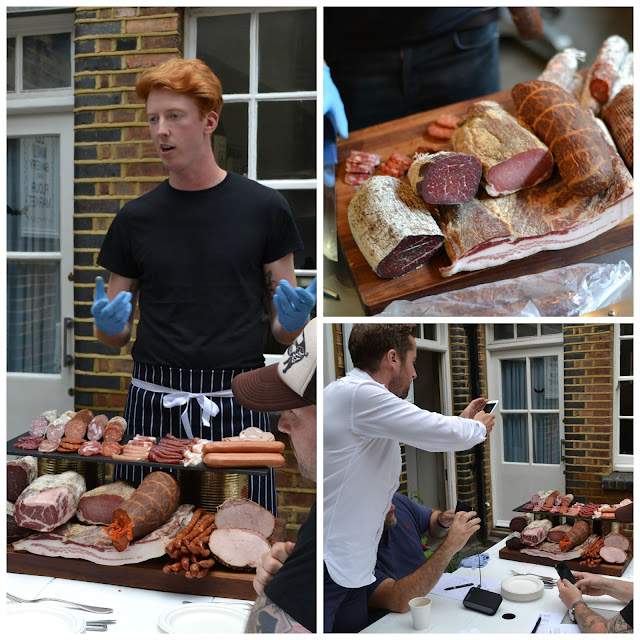 You want bresaola? We can do it. You want chorizo? We can do it. You want hybrid, rare breed, maturated salami to tickle your Italian aunt's fancy at her 60th birthday party? We can do it! This seemed to be the over-riding, confident message from young butcher and charcutier Matt Hill, who is  producing a whole range of cured meats, along with his colleagues, in North London. His platter was certainly very impressive visually and had quite the impact when he brought it out, only to be ruined seconds later when Richard Turner plunged a digit into some fat njuda, to scoop out a lump and eat in one fell swoop. Personally, I felt that their salami was extraordinarily good and I also thought that Matt had fantastic hair. 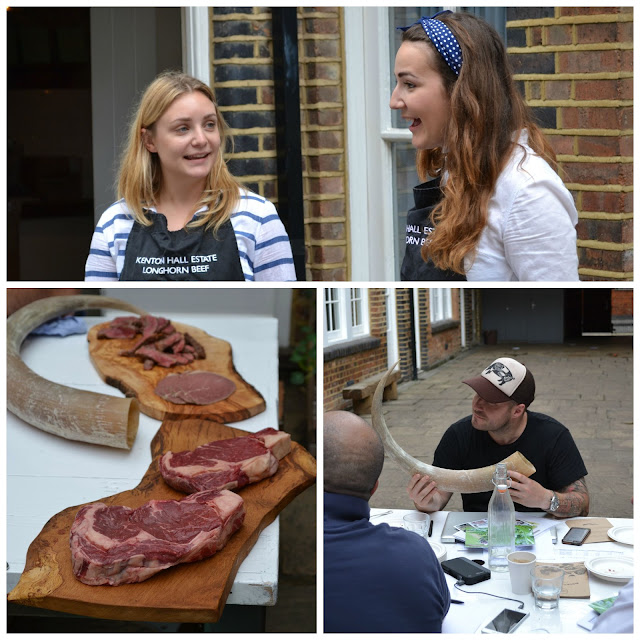 Move over the Hemsley sisters. In fact, you can fuck right off with your healthy eating, girls. For here are the McVeigh sisters, namely Emily and Lucy, and they are bringing us steak all the way from Suffolk. And very good steak at that. From English Longhorn cattle, an ancient native breed, raised with the utmost care and attention with regards to welfare. I didn't know that you could become a nutritionist for cows but apparently they exist and this is just one of the standards put in place at Kenton Hall, to ensure a quality product. Actually frying their steak posed the biggest challenge for Emily and Lucy, nervously aware of the audience they were cooking for. But they did an excellent job, on top of a fluid and comprehensive presentation. 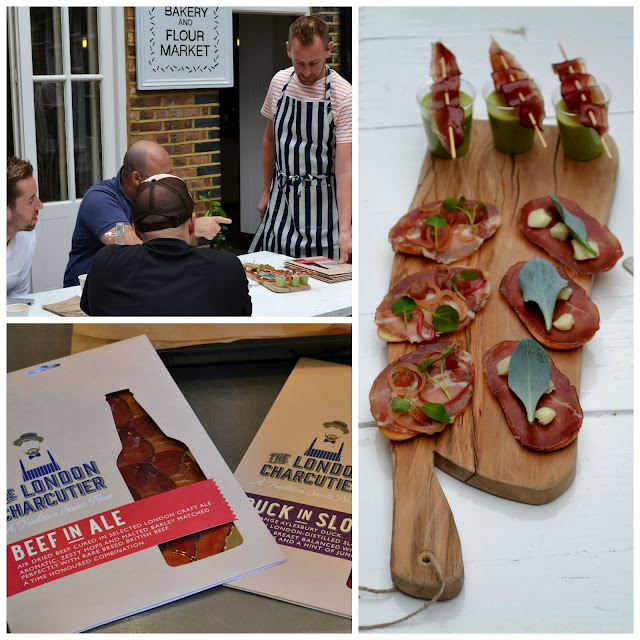 Former chef Simon Hodge and now curerererer of meats brought a great deal of much needed elegance to proceedings with his thin slices of beef in ale (Five Points) and duck in sloe gin. Dressing his board with a variety of added ingredients, including oyster leaf and pea soup, we veered into restaurant territory, which silenced the judges and their belching. But only for a second or two. Inspired by old English recipes for curing, Simon has been operating out of London Fields for just under a year. His proposal was a quiet one, although I did like his view on the boast that the world's first air-dried ham came from Carmarthen. "Yeah, that must have been circulated by the Welsh Tourist Board that one," he quipped, dryly. 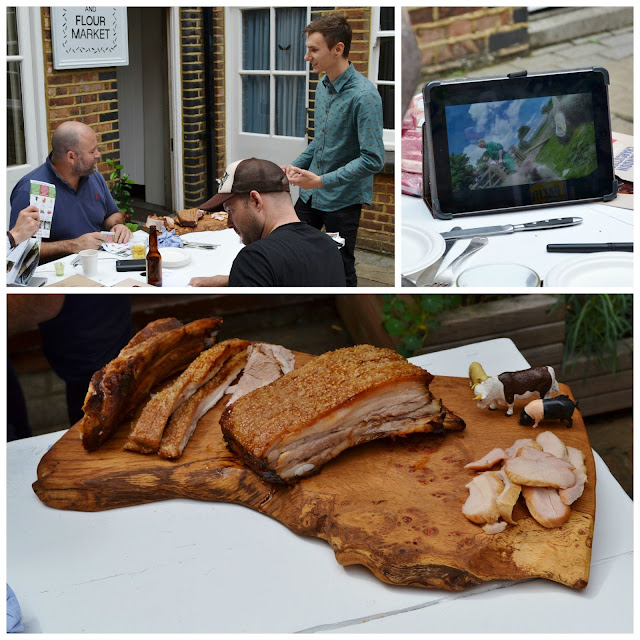 They are doing all manner of things up in Leeds, so it seems. From delivering meat boxes across the country, to organizing pun-tastic 'Meat-Ups' to educate the masses, to strapping GoPros to sheep for high octane video tours of the farm. All ideas coming from the brain of Ed (just Ed) who runs the retail side of the business. With a clutch of awards already under their belt, they are obviously doing something right. The crackling from his tender pork belly, slow-cooked in cider, delivered a brilliant crunch and his slivers of smoked chicken went down very well, I know that much. That Ed wants to make strides on the nose-to-tail side and deliver offal to the general public was also good shout. If you fancy trying one of their boxes out, don't be surprised if you find some bones for stock tucked in there. 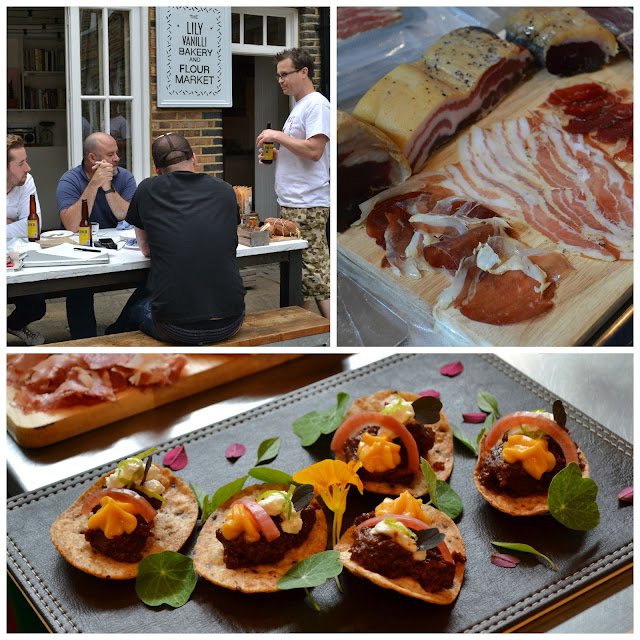 Last but by no means least was Will Yates, who was entering his gourmet jerky snacks in for a second year running. Or so everyone thought. However, it seems that young William has been working on a lot of other things in his unit in East London. Namely pancetta, bresaola, some smoked ox-cheek (in chilli) and a cheesy sauce imbued with njuda. Plus some rather spermy shaped biltong and lots of other 'bits and pieces'. After looking down at it all, it was difficult knowing where to start but Will has definitely had his inventors' hat on over the last twelve months, proving that his obsession with all things meaty, or chilli for that matter, has not diminished. And to think this all started with a single dehydrator on his kitchen counter at home. Impressive stuff.
Labels: meat