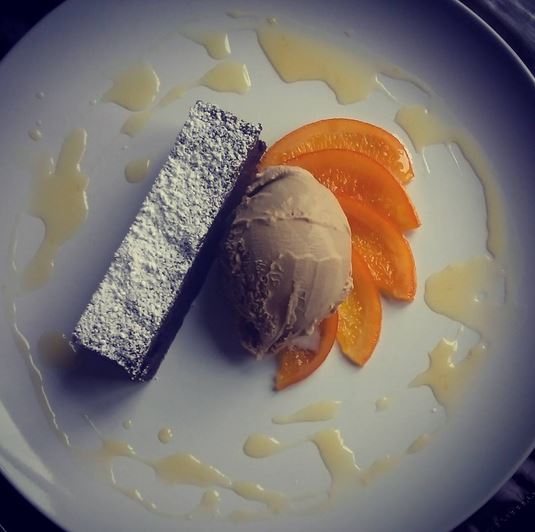 I have witnessed first hand, on many an occasion now, what it takes to quenelle ice cream. And when you watch someone do it confidently and deftly, with two spoons, floating, crossing and spinning in this kind of fluid motion, to create this perfectly smooth egg; well, it's quite hypnotic. Mores to the point, when you watch someone who knows what they are doing, it also looks quite easy.

The last time I saw someone quenelle under my nose was when I attended a masterclass in pastry at The Cookery School in Great Portland Street, as organised by Great British Chefs and led by Graham Hornigold, who is Excutive Pastry Chef for the Hakkasan Group. We covered various desserts and techniques, including a fantastic twist on apple tart tatin with vanilla ice cream and leading the way on the quenelling front wasn't Graham himself but his right-hand man Daniel Pearse. And he was doing it with one spoon.

Holding a tub of speckled, yellow frozen cream, a quick skim across the surface was all it took, before quickly drawing it back over again, to add an extra layer. Daniel then ran the spoon, oh so quickly across the base of his palm, along his life line and then placed it on the plate. On and on he went, continuing in this way, zipping down perfect ovals onto china. Down on twenty plates all told and all within the blink of an eye. I don't think I can reiterate how quick he was. Apart from saying, he was very, very, very quick and it was a marvel to behold.

It was also mildly annoying because I can't quenelle for toffee. I have been trying for years now and I still haven't quite got the hang of it. Despite lolloping tongue and squinting eye, my efforts always resemble a whizz bang, sharted delivery from a hen that has been egg-bound for five days.

I really don't know what to do about it. Although I suspect the key factor is to let your ice cream come up to the perfect temperature before attempting any artful ellipsoidalising (sic). I know Häagen-Dazs recommend that you leave their ice cream out of the freezer for a required 12 minutes before any attempt is made to scoop. And this does seem to be the right amount of time. But the window of opportunity to work in after that always seems to be so narrow. So, so narrow.

At least, this is what I found when I came up with this recipe to showcase the release of a new ice cream from Häagen-Dazs, a luxuriant coffee flavour that has been on the market around the globe for a while but never in this country. Interestingly, when I tweeted that I had got my hands on a tub of the stuff, a gleeful and slightly jealous thrust of hands went up, rejoicing that at last it was on these shores. Personally, I had some doubts at first, having blasted my taste buds on some harsh bitter incarnations in the past. However, in their indomitable way, those cod Scandinavians from New Yoike have nailed it again, with a creamy, frothy mouthful of java that really is quite delightful. 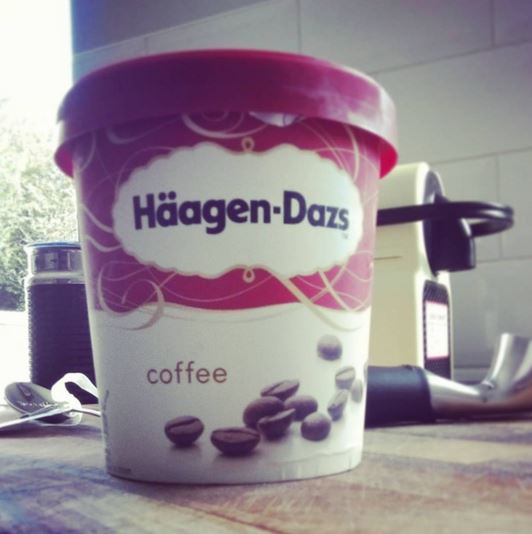 To match the rich coffee notes of the ice cream, I decided to pair up two tried and tested partners in the shape and form of chocolate, cardamom and orange. Wait, that's three but all three flavours do work very well with coffee. I would say that this combination of smooth coffee; astringent, dark cocoa; spicy, warm, almost gingery tang; and a sharp, sweet citrus kick is one of my most accomplished desserts to date. But then I would be bragging and no one likes a bragger. Especially one who can't really quenelle.

With that in mind, when plating this up, you might want to go for good old fashioned dollops of ice cream, rather than the egg shaped ones. Unless of course, you are as fast and accomplished as that Daniel Pearce. I haven't seen anyone as quick as him yet though. 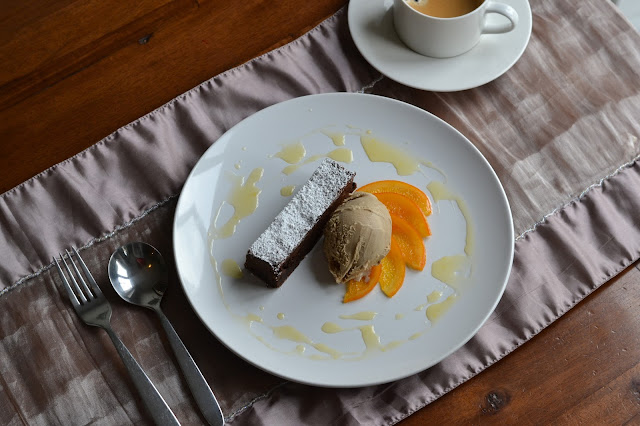 For the candied orange 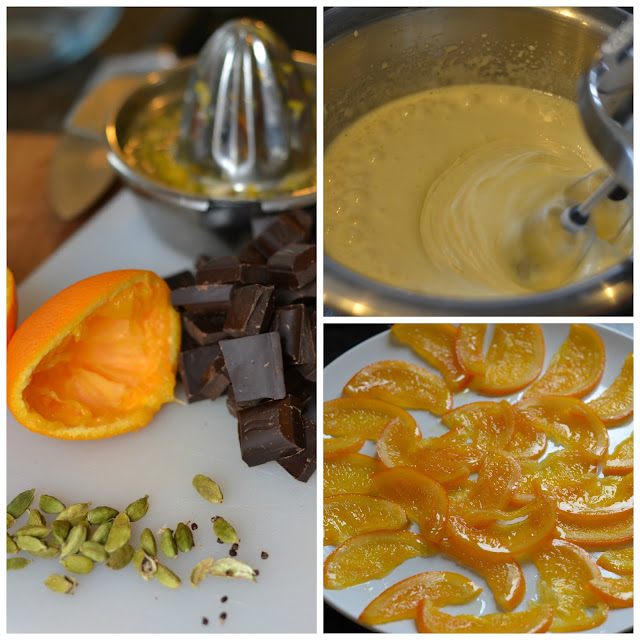 First, preheat your oven to 180C. Then take a square baking tin, approx 20cm across and line with baking paper, making sure that there is some left to overhang on either side of the tin (helps lift the brownie slab out see). Grease the paper and sides of the tin with the butter.

Place a pan of water on the hob and bring it to a simmer. Then place the chocolate pieces and butter cubes into a bowl and sit on top of the water to slowly melt. Whilst that is going on, crack the cardamom pods and take out the black seeds and crush in a pestle and mortar, until they become a fine powder. When the chocolate and butter has all melted, tip in the cardamom, orange zest and juice and stir through. Take the pan off the heat and leave for the bowl on top, so that everything stays melted and warm and so that the flavours can infuse. 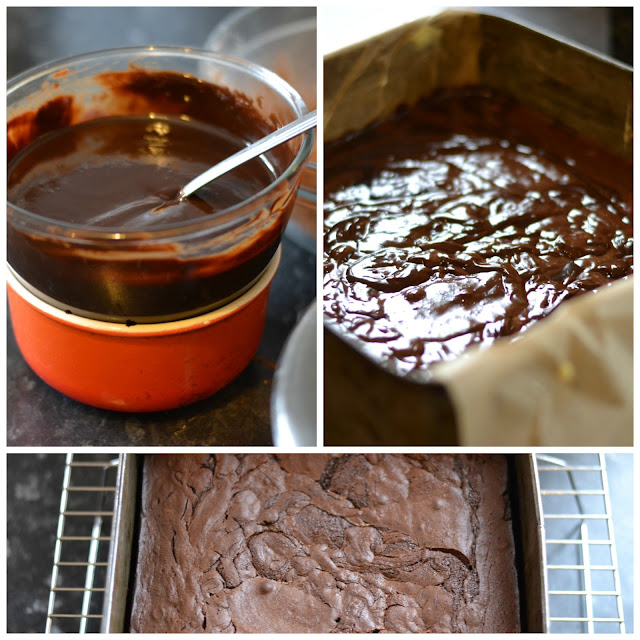 Next, place the eggs and sugar into a bowl and whisk them together with an electric whisk, until the mixture becomes light and fluffy. Sieve in the flour and cocoa into the bowl and fold with a spoon to incorporate together. Then slowly pour the melted chocolate in, folding gently and trying not to beat any of the air out.

Pour the mixture into the square lined tin and give it a shake, so that the mixture distributes evenly and then pop it into the oven on the middle shelf for 20-25 minutes, or until the top is firm to the touch. (Don't worry if the centre still seems wobbly, you want a bit of goo) When done, take out and  leave to cool in the tin but keep at room temperature.

To make the candied orange, simply half each orange and then thinly slice each half into moon-like segments. Place the water and sugar into a saucepan, put on the hob and bring to the boil and then tip the orange segments in. Continue to boil for 10 minutes or so, turn the segments every now and then. And then reduce the heat to a low simmer and leave to gently bubble away for 30 minutes. The syrup will reduce and the orange will cook through completely and glaze. When done, lift the oranges out and leave to cool on a wire rack, reserving the orange syrup left behind.

Before plating up, take the ice cream out of the freezer and allow it to warm up for 12 minutes. To serve, arrange five segments of candied orange on each plate. Then, sieve a fine dusting of icing sugar over the brownie slab and then using a sharp knife, cut out rectangle slices and place at an angle away from the orange segments. Scoop or quenelle a healthy spoonful of the ice cream and place in the centre. Finish by drizzling over some of the reserved orange syrup around the outside of the plate. 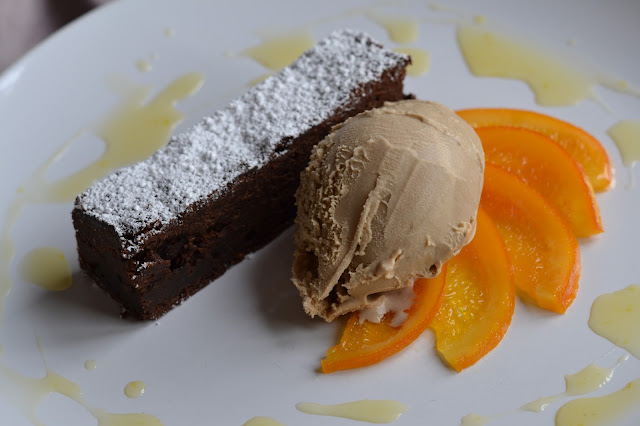 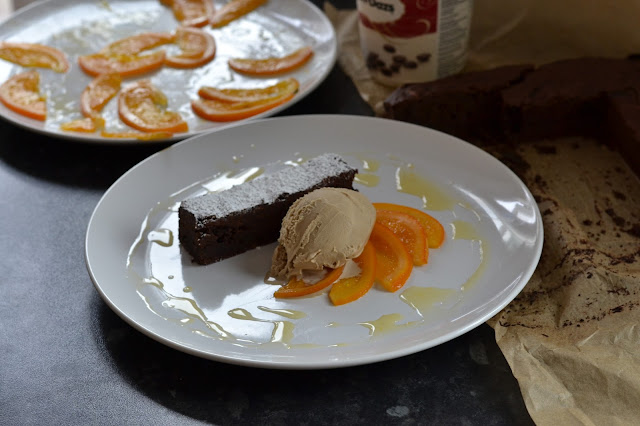 Food Urchin said…
William Leigh - The light that burns twice as bright burns half as long and you have burned so very very brightly. William, Look at you. Slow down. Take your time. Take 12 minutes.
19 October 2015 at 08:51