Homemade mushroom soup, elevated by the power of bacon 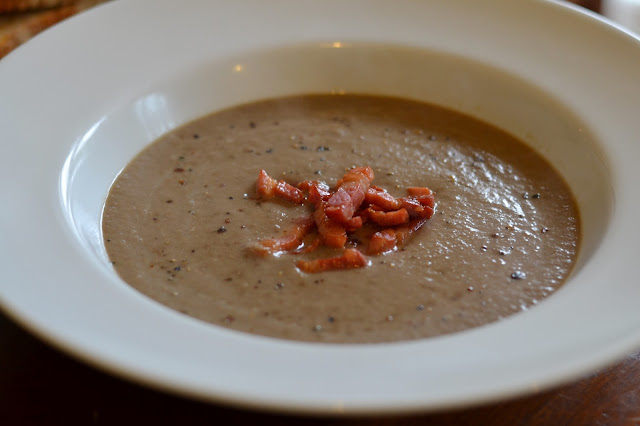 A little bit of dirt never hurt anyone. At least this is what I tell myself whenever I go about the business of cleaning mushrooms. Which in itself can be a rather complex business. If you didn't already know, there are two trains of thought when it comes to preparing edible fungi. The first is the artis-anal method of gently sweeping specks of detritus from your beloved champignons with a small pastry brush or damp cloth. Gently, gently, swish, swish you must go. Picking and scrutinising each delicate trumpet at a time and holding up to the light, before kissing each musty dome and placing down onto a (clean) tea towel. Preparing mushrooms in this way can take anything up to twelve hours.

The second, more prosaic approach is to quickly blast the buggers in a colander under a cold tap, along with a brusque fondle. A sort of jazz hands whisk and boff, your shrooms will be clean in seconds. The water will not do your mushrooms any harm at all. They will not act like sponges and draw the water in. Their earthy essence will not be diluted. Some French men may cry but your mushrooms will be OK, OK?

With all that in mind, I do still sort of hover in between. I will often start off with the prerequisite flourish of a true gourmand; frilly shirt, dancing around the kitchen to Debussy, running a pair of morels through my fingers like a pair of baoding balls; an OXO silicone brush in the other hand.

However, the stark realisation that I am actually preparing value range 'whites' soon hits me.

So, into the sink they go.

And yet, as soon as those mushrooms hit the pan, I will always, always spot a small, dark crumb of compost and this happened to me the other day when I was making some soup. You sort of sigh at first and feel deflated but in all seriousness, does it really matter? Eating that small bit of mud? I've eaten carrots straight out of the ground before. Hell, I used to eat dirt on a regular basis and it never caused me any harm. Aside from the regular bouts of worming medicine that Mum used to give us. God, that pink stuff was dreadful. But no, mud is good for you. Oomska, wellingtons, growing up on farms* and all that.

Anyway, I made mushroom soup the other day and bloody good mushroom soup it was too. And it was bloody good because I decided to pop some bacon into the mix. You might think that this is a no-brainer. Bacon will improve any given situation, especially where dormant fears about mud are concerned. But adding lardons really does elevate things as the inherent saltiness (and not to forgetting to mention meaty flavour) pairs up wonderfully with the hearty, velvet quality of a good mushroom soup.

Definitely one for autumn, as skies turn grey and golden leaves drop, onto barren patches of earth littered with dusty brown caps. Caps dusted with dirt.

First soak the dried porcini mushrooms by placing in a bowl and covering with boiling water. Leave for 20 minutes to rehydrate.

Meanwhile, add a healthy knob of butter to a large saucepan and place on the hob over a medium heat. Melt the butter and then add the onion to the pan, stirring through every now and then. After 10 minutes, the onion will have softened and begun to caramelise, so add the garlic and picked thyme leaves. Stir through for another couple of minutes or so.

Drain and press the dried mushrooms through a sieve, reserving the brown liquor in a bowl and then add the mushrooms to the pan. Again, stir and gently fry off for another 5 minutes. Then add the bulk of the white mushroom and stir through. After ten minutes or so the mushrooms will have cooked down and become soft so at this point add the reserved mushroom liquor and vegetable stock. Be wary with the liquor and don't pour it all in, as some grittier bits might be at the bottom. Bits that are a lot grittier than mud. Bring up to a simmer and gently cook for another 8-10 minutes.

Leave to cool slightly before blitzing in a blender and then place in a clean saucepan. Depending on how you like your soup, you can let down the thickness a bit by adding a splash of milk. Taste for seasoning

Just before serving, heat up the soup and place a frying pan on the hob over a high heat. Toss the lardons in and keep giving them a good old toss until cooked through and crispy.

To serve, ladle the soup into bowls and place a good portion of bacon in the centre. Finish with a extra sprinkling of cracked black pepper and make sure you have some buttered bread to dip in.

*I didn't grow up on a farm but I did live near a field.
Labels: musing recipe soup

Alicia Foodycat said…
My mother in law won't share recipes. This clearly cuts me to the quick. And the big thing she's holding over my head is her mushroom soup recipe. She says it has a secret ingredient, and every time she sees a mushroom soup recipe she giggles and says "They don't know my secret". I have to stick this under her nose and see if you've cracked it.
23 October 2015 at 14:16

Alicia Foodycat said…
She's a shocker. At one stage my sister in law sent in an adorable grandchild as a spy, and even she couldn't get the secret of the creamed chicken.
24 October 2015 at 13:20

Sarah Foody said…
i just love the mushroom soup recipe , i try to have it once a week , it is really good for health :)