Goat Tagine with Chickpeas and Prunes 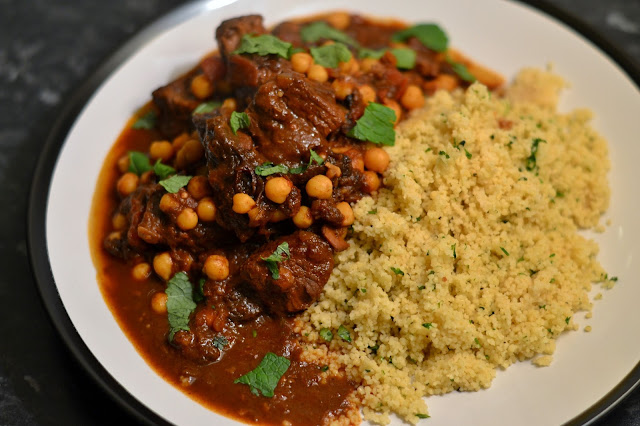 Here is something that I have always wondered. Do you actually need a tagine to make a tagine? A proper, glazed, conical pot that is; resplendent with a tiny little hole to let steam escape and to flood the air with the smell of fragrant rose petals and heady spice. It is one of those ponderous, philosophical questions after all. Up there with 'Does a tree make a noise, in a forest, when it falls down, inexplicably, all by itself, for no apparent reason, and there is no-one around to hear it, or even care?' I don't own a tagine you see. By all accounts, due to a poor record with earthenware and an increasingly overpopulated kitchen, it's an unnecessary purchase. Still, every time I make one (and I often do) I usually have this nagging doubt inside that says 'This is just a stew Dan. No more, no less. Don't kid yourself. This is not (pause) a proper tagine.' Which makes me feel quite sad. Quite sad indeed.

Obviously, you may already be reading between the lines here and have noticed that last bout of melancholy is a blatant and somewhat immature attempt to get my own way. But I do hope to get my hands on a tagine one day. And if that means plucking on HARDENED and BRITTLE HEARTSTRINGS, then so be it. In the meantime, I shall continue to use my battered Le Creuset pot instead.

In short, I made a lovely tagine the other day using some excellent goat meat from Cabrito Goat Meat, who are now making the foray of introducing their product to a wider audience via Ocado. There's a great story behind Cabrito and it is one that is worth repeating. Saying that, I have already written about them before on FU so you'll have to read this instead. I would like to make a new observation though, in that whenever I see founder James Whetlor roaming about the place, in person or on TV, the man is always dressed in shorts. Maybe someone once told him that he has got sexy knees. Or maybe he just waiting for the kid chops, mince and shanks to start flying out and then he will be able to afford some proper trousers. Because they are keenly priced but justifiably so. Corralling suppliers and implementing a new preventative system for an industry that routinely slaughters 90'000 billy goats a year can't be easy. Or cheap. I'd like to think that Cabrito are slowly but surely getting there though.

Another voice in my head then has been urging that, as a household, we really should focus on buying better quality, ethically sourced meat; which naturally, is going to come at a higher price.  You're probably thinking right now - 'You don't already? You bar steward?!' But alas, it's true. I still waver between the keen-eyed, apathetic, supermarket bargain hunter and the austere, worthy shopper who waves wads of notes tearfully for rare-breed flesh at farmer's markets. I am sure that is typical for a lot of people but I am working on steering our meat buying towards the 'good' method. Rather than the bad.

As such, I am also beginning to also think (shock, horror) that we should buy and eat less meat. Marginally for health and environmental reasons but most importantly to elevate it to the status of a treat, rather than an everyday occurrence. Which includes leaving out ham from sandwiches!

Coming back to the carnal pleasure of eating meat for a second or two, having served up this tagine, at least I know the promise of this recipe at the weekend will make up for beans and cabbage in the week. Especially for my daughter, as she scoffed it in minutes. My son even went so far to say at the dinner table "F**king hell Isla, you ate that quick." A statement that was issued so calmly and innocently, that at first, it was as if nothing untoward had just happened. Don't worry, mouths soon dropped wide open with gobsmacking gobsmackness and the sound of forks and spoons fell clanging down on plates, and the boy turned a bright shade of crimson red.

The dishing out of admonishment fell quickly into my lap and the first thing I could think of saying out aloud was "Where the f**k has he got that from?!"

And this my friends, is one of the many, many reasons why I am not allowed to have a tagine.

First heat a good splash of oil in your pot on the hob and then add the diced onion and fry off, stirring continually until it softens and starts to caramelise. Then add the garlic and ginger and continue to saute for a minute or two.

Next add the goat and brown off quickly, and then add the Ras el hanout, paprika and prunes. Again, cook off for a minute or two and the add the tomatoes and stock and taste for seasoning. Bring to the boil and then reduce to a simmer and leave to cook on the hob, with a lid half covering the pot for one and half hours to two hours, or until the meat is completely soft and tender.

About twenty minutes before serving, throw in the chickpeas and stir. The liquor should start to thicken after a bit. When ready, serve in bowls or on plates, with an accompaniment of your choice (we used boring ol' cous cous) and throw a load of torn mint leaves over. Nice.

Ginandcrumpets said…
We can only hope that posts like yours mean more customers for Cabrito and real trousers for James.
22 January 2016 at 16:05

Food Urchin said…
Ginandcrumpets - I am going to spearhead a campaign with the hashtag #buygoatbuysjamestrousers
22 January 2016 at 16:15

Mord Fiddle said…
Do not disrespect the battered Le Creuset pot. Battered Le Creuset pots are, quite possibly, second in importance only to a good, sharp knife when it comes to matters of the kitchen. Their utility and versatility is second to none. One can even bake astonishingly good bread in them.

Be proud, therefore, of your The battered Le Creuset pot. I would not trade mine for tangines in Marrakesh.
22 January 2016 at 16:59

Unknown said…
lovely looking stew there Danny!.. oh alright, tandoori... oh I mean tagine god damn it. Nice photo too. new camera? I have decided to go meat-free during the week and I have to say it's been so easy and leaves the weekend for such glorious treats as roast lunches and bacon butties... a nice way to help the environment, the waistline and the little animals. xx
22 January 2016 at 19:27

Food Urchin said…
belleau kitchen - I do also do tandoori in that pot Dom, so you're not far off. And that is a good idea that, I might try and do the same. The operative word being 'try' here.
23 January 2016 at 09:41