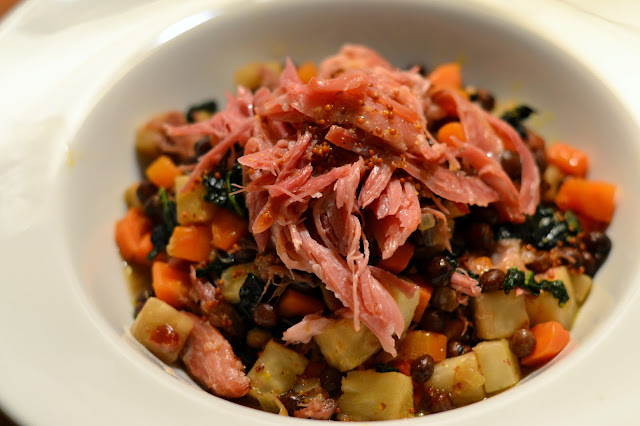 This dish started off with all the best intentions of becoming a hearty and warming soup, to slurp on a frostbitten day. Something not too dissimilar to a London particular and everything was going swimmingly, until I decided to start picking at things. Don't get me wrong, the mantra of 'tasting as you go' is a good one to apply when cooking. A little nibble here and a thoughtful bite there does no harm along the way. And of course, your taste buds can act an early warning system; the equivalent of keeping a caged canary down a tin mine so to speak, to avert any possible disasters ahead. Alright, there would be a terrible irony if you ended up poisoning yourself with E.coli after using this method of assessment. In which case, I would also suggest that you keep your throat canary in tip top condition, as dead canaries can lead to...deadness.

Anyway, there is a problem with tasting, insofar that it is very easy to get carried away. I mean, how many times have you knocked up some flour, sugar and butter for cake, absentmindedly taken a lick of the spoon and before you know it, have eaten the whole damn mix? You done that before haven't you? Yes, I know you have.

Well, this is what sort of happened with the soup. It started with the root vegetables. Carrot, celeriac, onion and garlic, all collectively bubbling away in the pan, in a light bath of melted butter. In their raw states, these sort of root veg are fairly unassuming. Yet apply some heat and get them starches converting and they soon transform into cuboid jewels of tuberous joy. Provided that you've diced them up properly that is. But hey, even the most lopsided brunoise can taste of sweet shop candy. 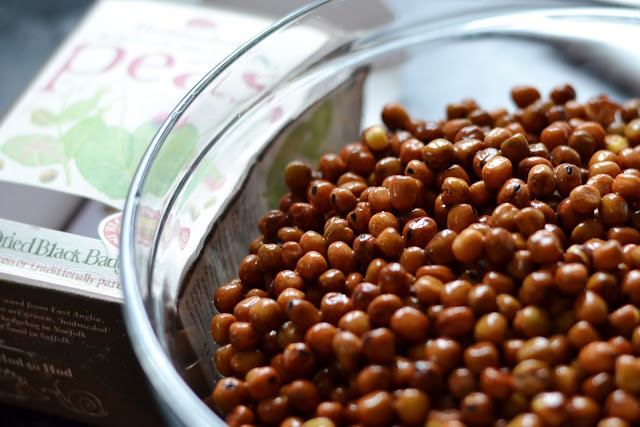 Then came the black badgers and by that, I don't mean the stripey-headed type, marching into the kitchen, going "BADGER, BADGER, BADGER." I am talking about Carlin peas, famously from Lancashire and currently making waves as the pulse of choice. In certain vegan circles. Where the association with badgers comes from I don't know. But having kept a box of them from Hodmedod's (again, another curious name) in the cupboard for nearly over a year, I felt it was high time that they got used. For much needed fibre, if anything else. Now, Carlin peas are a lot earthier than most pulses but they've also got this alluring nutty flavour. So after simmering them for 45 minutes or so, I found myself popping badgers into my mouth with alarming intensity. Which is something I never thought I would ever hear myself say. 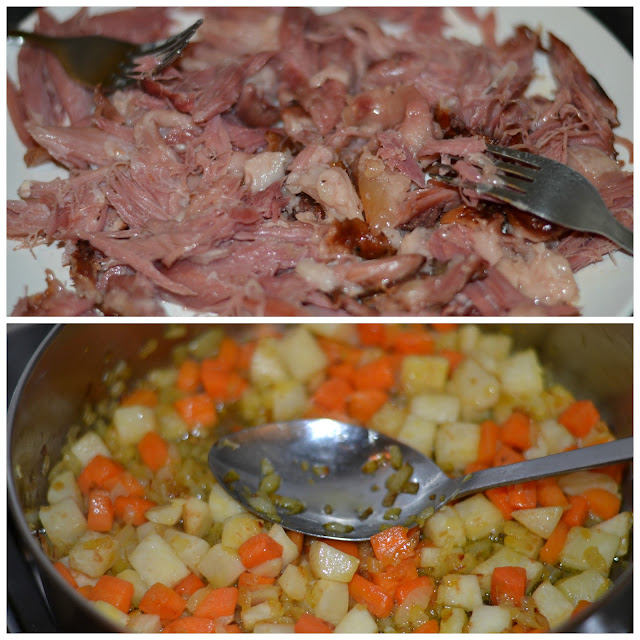 The last temptation came in the form of a smoked pork knuckle, bought from McKanna Meats on Theobolds Road; who are surely the most happiest of butchers in all of London town. Given that my last post made mention of easing back on meat, I have no qualms about harping on and eating this brilliantly frugal bit of pig. My eyes always twinkle whenever I see them on the counter, fondly recalling a huge knuckle once served up in front of me in Krakow, Poland. Boiled then roasted hard, so that the skin crisped and crackled, it was plated up atop a mound of fermented cabbage and nothing else. Ploughing through it was glorious; picking through pink flakes and wobbly fat, trying to dislodge sticky slabs of skin from my back teeth. I was carried out of the restaurant that day, all woozy and disorientated, with my chin glistening in the winter sun. No, you can beat a pork knuckle and as such, it all becomes very hard when contemplating about throwing it into a dish willy nilly. Especially something like soup.

So I didn't. I thought 'Sod it, let's just hold back some of that beautiful liquor for another time and make a sort of warm salad out of this instead.' Whether this recipe actually qualifies as a salad I'll leave up to you. But having left out the stock and the laborious process of having to pull the blender out from the back of the cupboard, and then blending, and then pouring back into a saucepan, and then washing up the blender, and then cleaning down the sides, because you forgot to put the lid on the blender; well, this works so much better without all of that.

Oh wait, this dish also contains kale and a dressing. So yes, it is a salad! 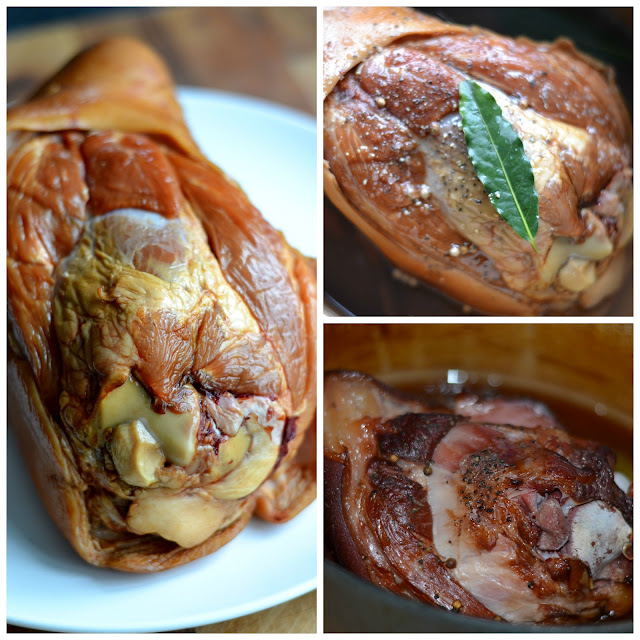 First, heat your oven up to 140C and place the pork knuckle into a casserole dish, adding the peppercorns, coriander seeds, bay leaves, ginger wine (optional) and water. Bring up to a simmer on the hob and then place into the oven, covering with a lid. Leave to slowly cook for 3 hours or so, until the meat is very tender and starting to fall off the bone. Then take the knuckle out of the stock and leave to cool slightly. Pull the fatty skin away and separate the pork and lightly shred with some forks. Cover with foil and leave in a warm place.

During the slow cooking of the pork knuckle, it would also be a good idea to cook your Carlin peas. So put them in a saucepan and cover with a generous amount of water. Place on the hob, bring to the boil and simmer for 45 minutes, until they are nice and soft. Drain and leave to one side.

(You could throw in some aromatics in with them, if you wanted to. Some herbs, garlic, chilli, etc. But whenever I have done this in the past to pulses, I have found that it hasn't made much of a discernible difference. So I don't bother)

Next, you need to cook off your root vegetables. Take a wide pan and place on the hob over a medium heat. Add the butter and leave to melt and froth before throwing in the onion. Stir for 5 minutes or so and then add the carrot and celeriac. The aim here is to fry and soften everything slowly, so reduce the heat a touch and leave to cook for 20 minutes but stir often to prevent catching.

Whilst the root veg are frying away, blanch the kale in boiling water for 2 minutes and then drain.

To finish off the veg, throw in the garlic, peas and kale and saute for another 2 to 3 minutes and taste for seasoning. As that cooks off, quickly make up your dressing by combining the ingredients in a small glass or jar and mix together with a fork, or tiny whisk.

To plate up, portion out the root veg and kale into bowls and lightly drizzle over some of the leftover stock. Then add a handsome amount of knuckle meat on top and finish with another drizzle of the dressing.
Labels: pork pulses recipe