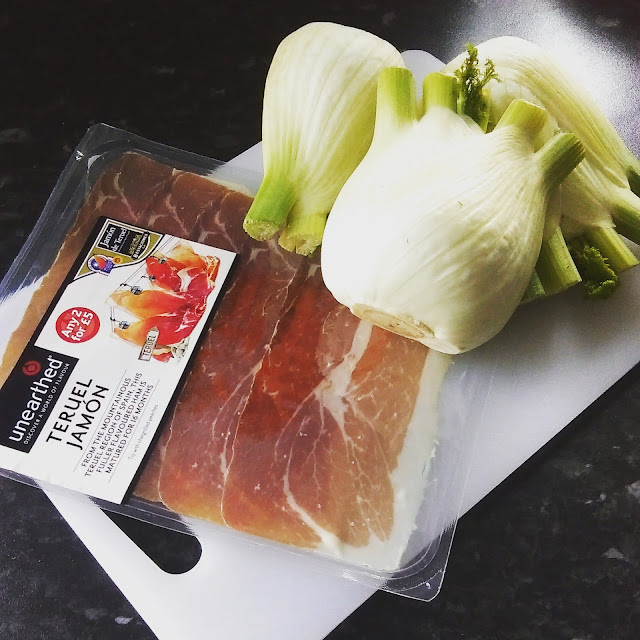 Blogger went down this morning (an alarmingly recurrence these days) and whilst I went into a sort of meltdown mode myself (which involved standing on my desk at work and smashing the monitor with my keyboard, repeatedly) I seem to have inadvertently posted an old draft, featuring a recipe that until now, has been lost in space and time.

This is often the case with me. If you were to have a quick sneak at what I have got going on on here, in the background and behind the scenes, you'd be thinking 'My God, what a treasure trove of missed opportunities and half developed/half crocked ideas you've got going on here Danny. If only you finished them off!'

And certainly, if you were a PR, you would most definitely be thinking 'Wait! You DID start to write up that yoghurt ice cream launch way back in 2011. I needed that coverage! You bastard!'

For that, I am sorry. I am a terrible blogger. But seeing as I have thrust the notion out there, this suggestion of braised fennel, with jamón, garlic and mint, well you may as well have the rest. Because this combination of caramelised and sliced aniseed bulb; imbued in a warm bath of oil and stock; spiked with sweet cloves of allium; and lifted by a healthy smattering of cooling 'erb, deserves to be out there. So to speak.

The fact that it features Teruel Ham from unearthed is totally coincidental. Any sort of Spanish or English cured meat would go nicely in this dish, as long as it is fairly fatty. A salami might be a decent bet, for a bit of spice. This jamón is pretty damn good though, with an inherent hit of nut flavour and I say that as one of the 'oldest friends of the brand.' No money has been exchanged.

I wouldn't mind, this isn't even my recipe. I got it from my favourite pair at Moro but if it wasn't for them, I would never have discovered braised fennel. So what perfect excuse to share the love?

Even if it was accidental.

3 or 4 fennel bulbs, trimmed and sliced into wedges, with fronds kept for later
4 cloves of garlic, sliced
4 or 5 tablespoons of olive oil
200mls vegetable stock
100gms of jamón, like say that Teruel ham, sliced into strips
Salt and black cracked pepper.
Juice of one lemon
Large bunch of mint, leaves picked and roughly chopped

Place a wide based pan on the hob over a medium to high flame and add the olive oil, bringing it up to heat. Add the fennel wedges and a good pinch of salt and briskly fry, turning as the fennel starts to catch. Do this for about 5 to 10 minutes and then turn down the heat. Throw in the garlic and mix through and leave to bubble away for another 10 minutes or so. During this point everything will start to sweeten and caramelise.

Next, take half of the jamón and mix through, so that it cooks and crisps up a touch and then add the stock.

Again, leave to bubble away for another 10 minutes, until the stock reduces and everything thickens up and becomes syrupy.

To finish, take off the heat and stir in the remaining jamón and mint and check for seasoning and then add the lemon right at the end.

Delicious on its own or served with grilled meat. Like pork for instance. Yes, more pig.