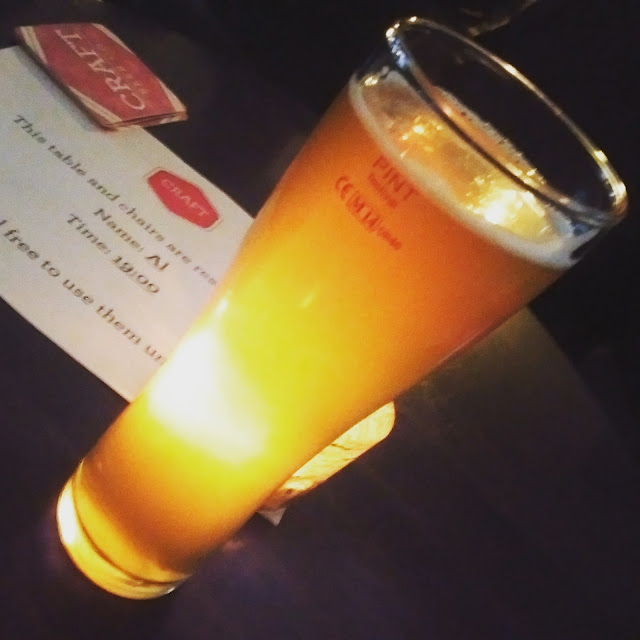 If you look closely at this rather blurry picture, just beyond the pint looming in the foreground, you can probably make out two things. First of all, you should be able to see a piece of paper baring the logo for The Craft Beer Co. And secondly, on that piece of paper you can just about make out that it is a reservation of sorts. Made by Al for 1900 hours, or 7PM to you and me. A table with chairs, for friends to gather around and share.

There is story coming here but first, I suppose we should talk about the beer that prompted this post, which shall be this Friday's Booze You Should Try This Weekend. This rather elongated Calypso Dry Hopped Berliner Wiesse beer, brewed by the Siren Craft Brew company, belongs to the oeuvre of 'sour' beers that are now out there, slowly sneaking their way into the imagination of the general public. Sour by name, they are sour by nature and until I received a bottle of some sour concoction in my monthly Beer52 box, I was oblivious to the whole concept. I vaguely remember trying a lambic beer at a festival and promptly spat it all over my mate (the same Al actually) but that was years ago. Anyway, maybe my taste buds have changed because I have tried quite a few of late and I am really beginning to like the style.

After the first gulp, there is still a necessity to blanch and form the usual cats bum pursing of the lips but take a few sips more and everything becomes altogether refreshing and crisp. Predominately, it's all the citrus notes that come to the fore when describing these beers - lemon, lime, grapefruit - but some do manage to punch through with a certain honey or orange sweetness, such as the aromatic Calypso. Which does help take the edge off a little bit.

Although fairly low in percentage at 4%, I wouldn't really describe it a session beer. Two pints is really enough, especially if you suffer from heartburn. But if you are feeling brave and see this Calypso whilst you are out and about, do point a stubby finger towards it. The drinking experience is well worth it. The barman in Craft asked me twice if I really wanted to try it. 'Of course I do,' I said, all knowing and debonair, before slinking off upstairs like the coolest of cats.

Which brings me the matter of our reserved table. Now, I don't know what is going on with the yoof of today but when someone reserves a table with chairs, the table and chairs belongs to them.Yes? No? Having got to the pub half an hour early and after ordering a pint of Calypso and walking into a massively heaving room, I found our tiny table, that was spartan and spare and with four stools around it. I sat down, therefore claiming the area and proceeded to sip on my gorgeous and invigorating golden pint.

Then someone came along and tried to pinch a stool.

'No, you don't understand. We've reserved this table. I am just waiting for some friends. They'll be here soon.'

'Yeah, well they can have it back when they get here, can't they.'

To which the young man smirked and waltzed off, with stool in hand, to his sexy, bearded mates across the room; all wearing baseball caps and no socks.

I waited for a moment, took another sip of zingy Calypso and walked over there and rather than remonstrate verbally, I simply took hold of the legs and proceeded to drag the stool back with smirky boy still sitting on it.

'WTF mate, you don't have to get all physical and violent! Jeez, if your stool means that much to you you can have it back.'

To which I simply responded, with mad cookie monster eyes.

And then I walked back to our reserved table, where thankfully, one of my mates had just arrived. As I sat back down, he asked me what was that all about and shakily, I said that everything was OK. But in that moment, a chasm appeared, a gulf that said perhaps I shouldn't go drinking in these sort of places anymore. Beer may be getting more sour but maybe I am getting too sour to drink it.

Anonymous said…
I'd have done the same if I possessed the upper body strength to drag giant entitled children across the floor. I bristled on your behalf, reading this.
27 May 2016 at 11:36

Yas said…
Good for you! Called his bullish bluff. Entitled kids indeed, as anonymous says... my friend and I were in the Jolly Butcher (no one to blame but us) in Stokey, which was full to the brim. As we were negotiating our way through the crowd, my friend managed to knock an empty pint on one of the tables, belonging to a bearded creature of said ilk. It didn't crash to the floor, just fell sideways on the table, and no damage done as it was empty. "haha, sorry about that!" said my friend, all light and chatty, as is the custom in such establishments. The guy gave her an icy stare: "just go." he said through gritted teeth. You'd think she'd scratched his new folding BMX or something.
31 May 2016 at 16:38

Food Urchin said…
Anonymous - Thank you for your bristling.