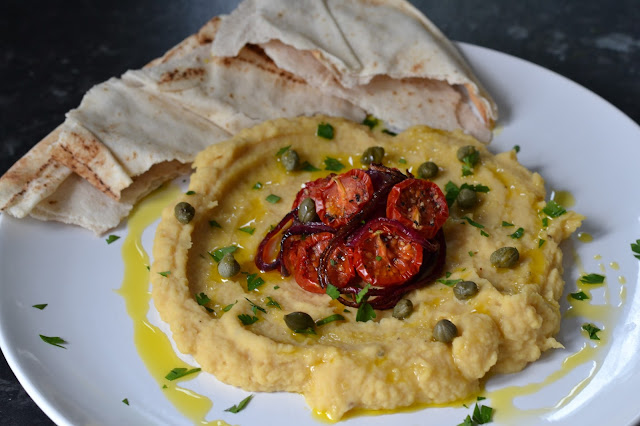 Battles are often fought and won at the dinner table and at present, a small war is being waged in a kitchen, in Essex. On one side stands a little boy, mischievous yet cherub-like and with a smattering of freckles across his nose. On the other, stands a man, slightly stout and bald but curiously charismatic nevertheless, and who should really have the last word on all matters in the household. However, no-one ever seems to take him seriously at home.

The main sticking point, or bone of contention, revolves around the humble tomato. A fruit that the man loves and adores, in all its states. Be it raw or cooked. As the centre star or hidden in the background, doing valuable (yet often unrewarded work) in a sauce or stew. He grows tomatoes in his garden. He talks to them. His neighbours have seen him talking to them. And they are clearly worried about him.

The boy hates them. Actually no, he doesn’t hate them but he isn’t really fond of them. Hours have been spent, sifting through the complex debris of a dish and one by one they often get plucked out, to be left all forlorn, on the side of the plate. Enquiries are constantly made, to which deceitful answers are given. But he always finds out. ‘Liar, liar, pants on fire.’ On the other hand, tomatoes that have been squished, boiled and drenched with sugar and vinegar to make ketchup, well that is absolutely fine. This makes the man mad.

Small steps are being made though. That tomatoes go into ‘spag bol’ was deemed revolutionary the other day. ‘Really? From those tins?’ A pan of baked eggs, surrounded by a sea of scarlet, and pepped up with chilli and oregano, gets eaten with such gusto these days that the man dares not whisper the T-word. Slow cooked tomatoes though, they have been the real eye opener. Halfway between raw and cooked, they were observed with much suspicion at first but explained as a sort of cousin of raisins, sort of made sense. And raisins are good to eat, by all accounts.

‘I love this Dad and the tomatoes too, it all tastes really good together.’

‘Well, that’s agra-dolce for you son.’

‘Agra-dolce? What, that’s the name of the tomatoes?’

‘Oh no, these ones are called piccolo.’

So despite that initial confusion, the tomato war looks to be nearly over and peacetime in an Essex kitchen should be achieved real soon. 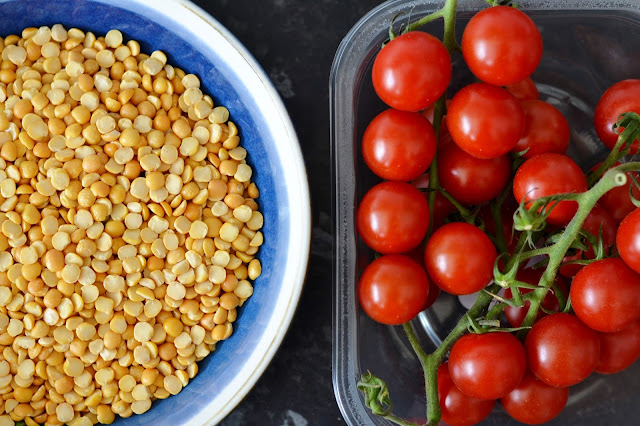 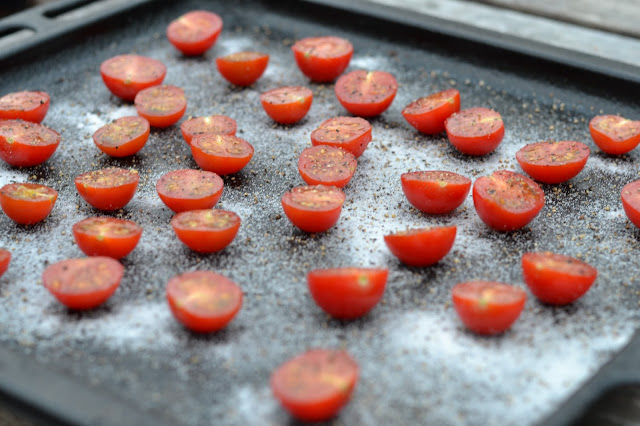 Spread out the tomato halves, cut-side up on a large baking tray. Sprinkle over the sugar, salt and pepper and slowly roast in the oven for 1.5–2 hours. After this time they should be shrivelled and shrunken and have become quite sweet.

Set aside to cool until ready to serve, or if making ahead, place in a bowl and cover with a good drizzle of olive oil. Store in the fridge until serving. 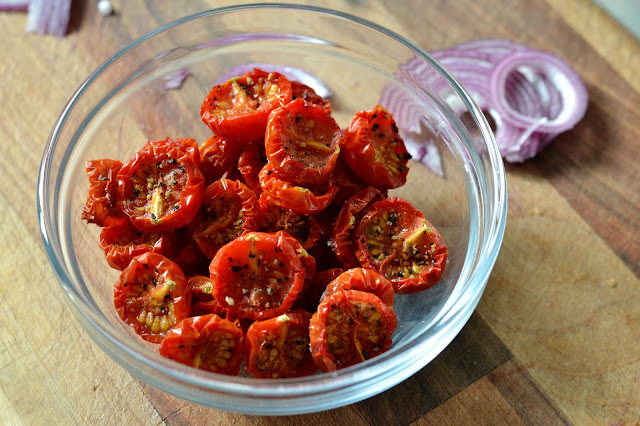 To make the purée, place a pan or casserole on the hob over a medium heat and add half the oil to heat through.

Throw in the chopped onion and sauté for 5–7 minutes, until it has become soft and translucent. Add the chopped garlic and fry for another minute or so.

Once the onion and garlic start to caramelise a little, add the yellow split peas and the bay leaf. Stir together and then cover with water, filling the pan to about three-quarters full.

Bring up to the boil, then leave to simmer for 45 minutes, or up to an hour, until the peas begin to break down and thicken. You may have to add a touch more water during cooking if it becomes too dry. 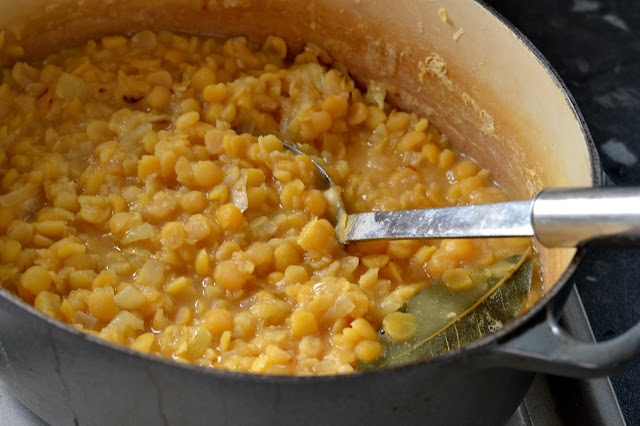 While the peas are cooking, preheat the oven to 180°C/gas mark 4.

Place the red onion rounds on a baking tray in a single layer. Sprinkle over the sugar and drizzle with the olive oil and pomegranate molasses. Pop the tray in the oven for 20 minutes, turning the onions over halfway through. 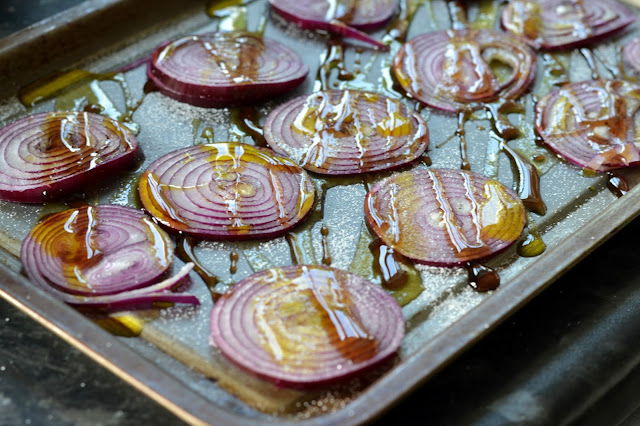 Cook the onions until sweet and sticky. Once cooked, remove from the oven and set aside to cool slightly until ready to serve.

When the peas are ready, remove the bay leaf and allow the pan to cool for 10 minutes before pouring into a blender. Blitz to form a rough purée, then mix in the lemon juice and remaining olive oil.

The purée will thicken up a little as it cools, but if too thick, add a little more oil to loosen. Transfer to a bowl and season to taste with salt and pepper. Cover the bowl with a tea towel and allow to come to room temperature. 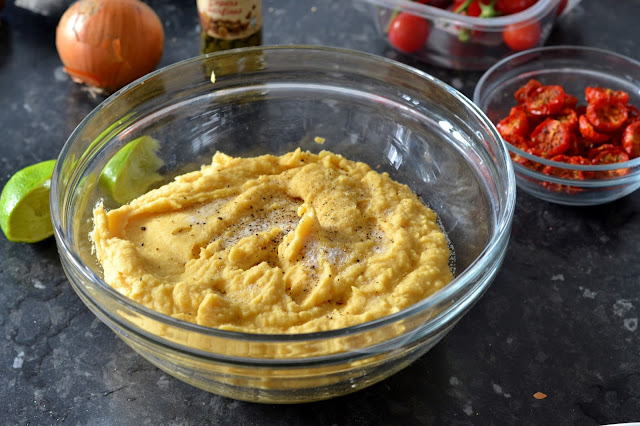 To serve, spoon a healthy amount of the purée on to the centre of each serving plate, spreading out into a rough circle. Spoon some of the roasted tomatoes into the middle, followed by some of the caramelised onions, layering up in a mound.

Scatter over the capers and some of the chopped parsley. Finish with a good drizzle of olive oil and some warm flatbreads to tear, dip and mop up with. 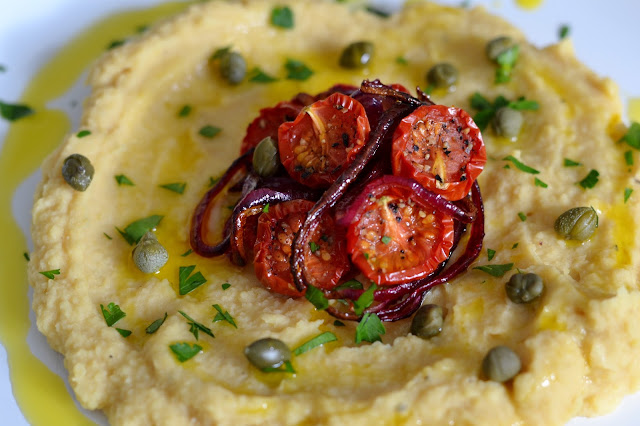 Ginandcrumpets said…
I hated tomatoes (expect in ketchup and spag bol) till I was in my mid-twenties, so you've only a few more years of this argument to go.

Dip and toms look bloody gorgeous. Just needs a chilled beer and a view from a taverna over the Aegean to complete it.
24 May 2016 at 18:12

Food Urchin said…
Ginandcrumpets - My lil' sis doesn't like toms either. I once had her visit me at uni. Spent hours making spag bol from scratch, fresh tomatoes, peeled, de-seeded and chopped, the lot. Placed it down in front of her. "You KNOW I don't like tomatoes Dan" "WHAT? YOU JUST WATCHED ME SPEND FIVE HOURS COOKING, WHY DIDN'T YOU REMIND ME!!!"

Pasta Bites said…
Yes I think so! The yellow split peas remind me of what in italy we call Cicerchie and I used to eat when I was a kid. Almost impossible to find sadly. I love the photos too.
27 May 2016 at 11:21