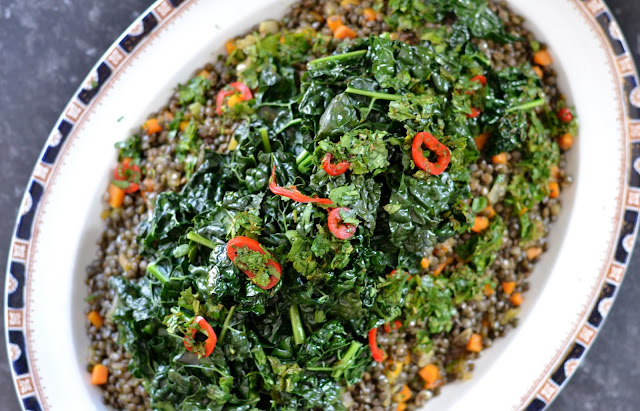 I don't know about you but I have long held the opinion that condiments, in all their shapes and forms, can deliver more than just a brusk slight of hand or mere passing over, once a plate has been slapped down on the table. Ketchup is an excellent 'secret' ingredient to hide in burgers and Spag bol and is very important for making Rose Marie blush. Mustard slathered on lamb chops before roasting ensures a delicate, melting undertone of warmth; as opposed to a harsh punch on the nose. And Marmite, when not being used to glaze chicken or to sneak into sausage rolls, can actually form the cornerstone of a hearty breakfast; without any need for hot, steamy, butter drenched toast. You can, if you so wish, simply scoop the black stuff out with your finger on the way to the train station.

The latter is an extreme option and I wouldn't really recommend it. No one will want to come near you afterwards; with your rancid, horrid Twiglet breath and brown lips. Trust me, I know. However, I honestly believe that you can stretch things beyond the pale with condiments and make them an essential component to most meals.

For example, traditional London pie and mash (my favourite) is nothing, absolutely NOTHING without a hearty dose of malt vinegar. Now, OK, we are still talking about it being used as an afterthought here, as a complimentary flavouring. But as any pie and mash lover worth their salt and white pepper knows, unless you unleash at least half bottle of malt vinegar (sometimes piqued with chilli) over that cardboard package, filled with unknown meat and paired with stodgy potato, then you really will be left out to hang and dry. Because without a liberal, verging on the obscene amount of malt vinegar, pie and mash tastes fairly disgusting.

There, I've said it. And now I have to hand in my 'Cor Blimey Guv'nor, I Was Born By The Saaand of the Bow Bells' badge. But it's true. Malt vinegar maketh the dish, via some strange, curious alchemy and I have always found it mesmerising to watch streams of fermented elixir, whirl dreamily into that white, watery broth, spiked with bits of green....bits. Is it parsley? Who knows.

With that in mind then, when I was approached by Sarson's to help develop a range of recipes where malt vinegar was to be used an integral element to the dish, I happily stepped up and took on the challenge. If I can help change perceptions and spark imaginations to away from the usual splashing over chish and fips and to horizons above and beyond; well, I will be able to sleep more soundly at night.

So here we are, having been feverishly working in the background, over many weeks and at the bemusement of my children - 'Dad, where is all this vinegar coming from'? - this is the first recipe of the campaign which stars verdant, handsome and healthy Cavolo nero, earthy gems in the shape of Puy lentils and an amusing hit of herbs, heat, tang and whatnot. Yes, this is a dish that essentially uses kale and yes, I have made snarky comments in the past about this particular brassica but in secret, I really do quite like to eat it. I used to grow a lot of it too. Keep that to yourself though, right?

Taking a dark and bubbled leaf then, from the good old south of the US of A and it's heritage to slather hot vinegar sauces over collard greens and the like, to lift them out states of bitterness; this is a slightly more refined and simple approach. Rather than go for a fierce hit, I have muted things a touch by using regular red chilli, the sort you'd find on your supermarket herb rack and left out the garlic, using the herbs to floral and grassy effect. You could go down a spicier route and up the ante with a more feral sort of pepper, such as birds eye, scotch bonnet or Mad Dog Dorset Death Star Naga, if that kind of thing floats your boat.

But what would be the point? Putting those poor, tiny papilla on your tongue through the rinser like that. I mean, you could gargle with some Sarson's afterwards, to calm things down. Vinegar does have antiseptic qualities after all. It just depends if you want to be known as that person on the train, who stinks of vinegar and Marmite.

Again, I wouldn't recommend it. 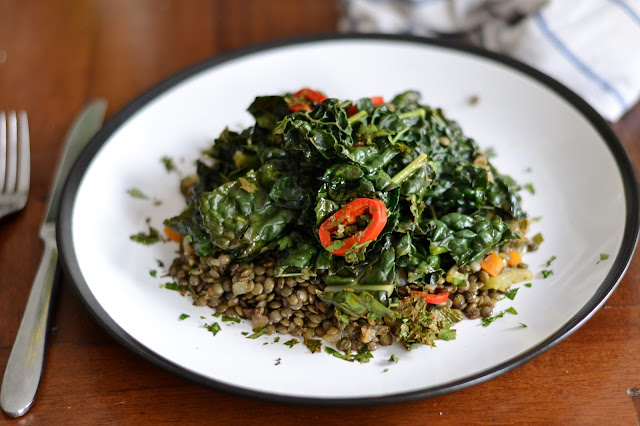 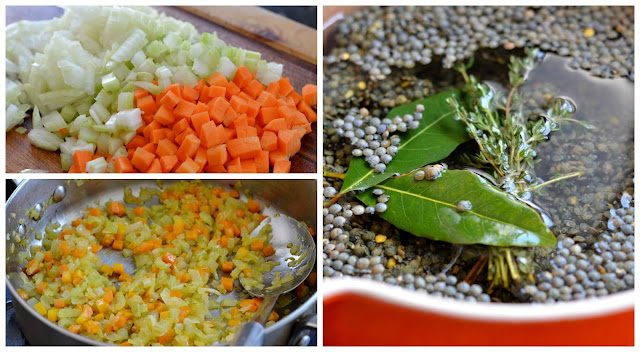 1. Heat the rapeseed oil in a frying pan. Add the onion, garlic, carrot and celery and stir through, so that everything has an even coating. Reduce the heat and cook slowly for about 20 minutes until everything is caramelised and sweet.

3. For the vinegar sauce: Place Sarson’s Malt Vinegar, water, sugar and half the chilli into a saucepan. Bring to the boil and reduce by half. 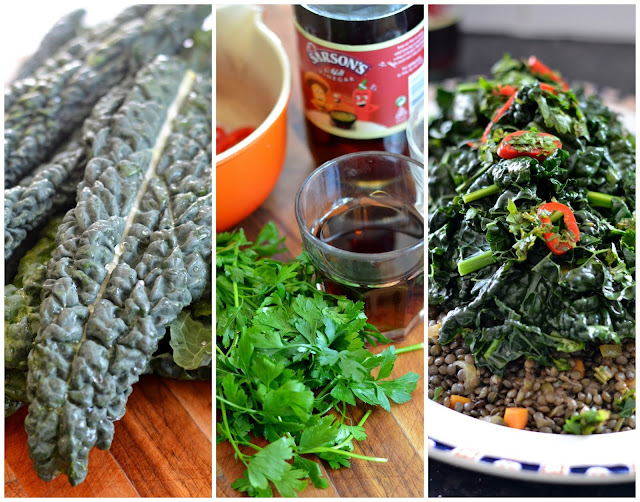 4. For the Cavalo nero:  Heat a little groundnut oil in a heavy-based frying pan. When hot, fry the shredded Cavolo nero tossing and shaking for 5 minutes, until it is just done. 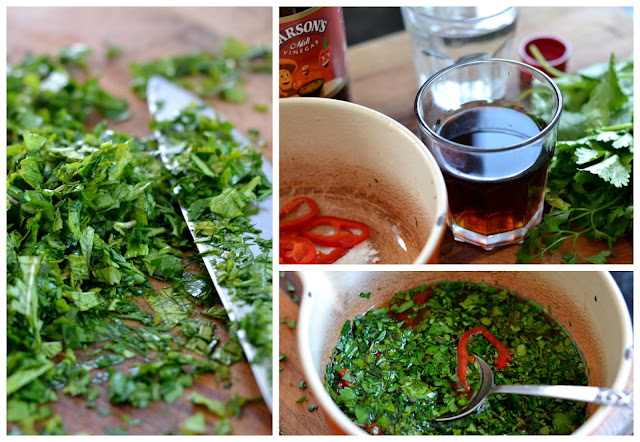 5. To serve, pour the lentils into the caramelised vegetable mix and stir through and spoon a generous amount on each plate. Do the same with the Cavolo nero and at the very last minute, throw your remaining herbs into the warm vinegar dressing. Stir through and drizzle over, adding a sprinkling of the remaining chopped chilli. 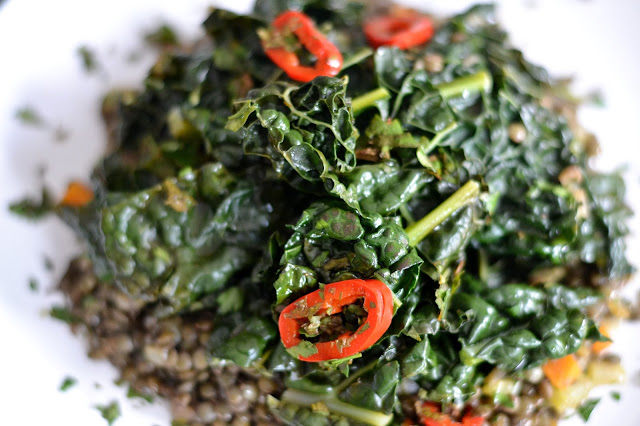 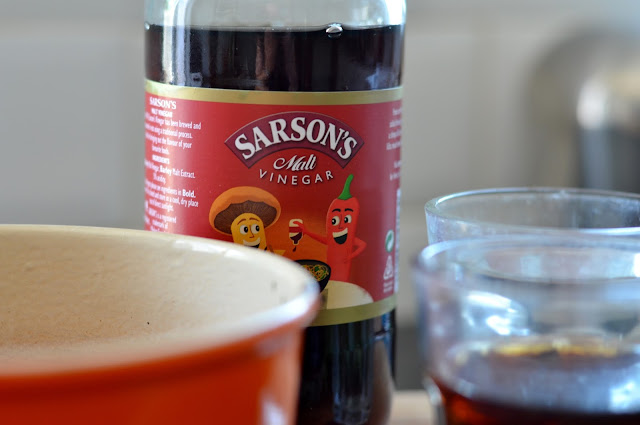 Tim said…
The hot vinegar with herbs is a great idea, then add the lentils and cavolo nero.. yum! I think it would go very well with some grilled steak or liver.
20 July 2016 at 16:42