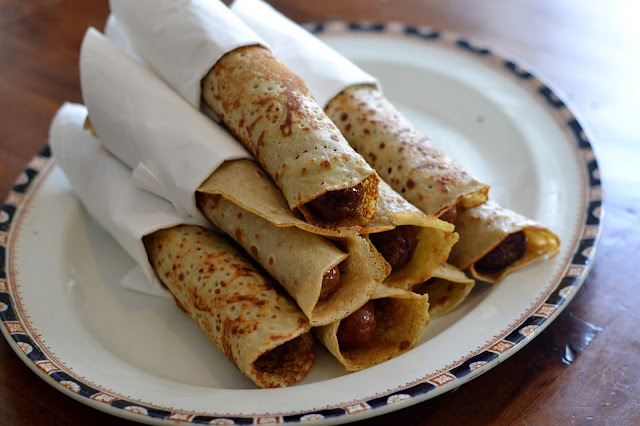 ‘Right, who fancies a sausage wrapped in a pancake?’

Admittedly, I have shouted out stranger things in the past but when I announced this from my kitchen the other day, the proverbial response definitely veered on the side of ‘Um…eh?’

Yet if you were to stand outside the Stade Rennais, or any other football stadium in the region of Brittany, there would be a glorious and resounding ‘Oui!’ For this street food snack, traditionally eaten at a football game, is so popular, it even has a fanclub and website. Hell, there is even a quirky, staccato pop song devoted to the humble galette-saucisse. Which really is just a sausage, or hotdog, wrapped in a buckwheat pancake.

Unfortunately, my schoolboy French is a bit rusty, so I haven’t been able to pin down exactly why they are so revered but given the brouhaha surrounding them, I felt that I just had to try them out. I was able to glean that buckwheat in particular has a long historic association with Brittany, as essentially, it is not a grass or proper wheat. It is actually related to rhubarb and knotweed and is therefore easier to grow and so was once an important staple for a poor, feudal population. The type of sausage itself is more nondescript. Long and with a high ratio of pork to fat seems to be the common factor, flavoured only with salt and pepper; again with an influence that rests upon cheap simplicity.

And for the purposes of thorough research, I also had to see what they were like washed down with some effervescent and tangy Breton cider, which is a classic accompaniment on the terraces of northern France.

The combination is pretty astounding really. The pancake, as you might expect, is slightly denser than your conventional crêpe but it has a wonderful nutty flavour and serves well as an edible napkin; to hold a juicy, hot banger. Normally, that would be that but when I made these for a braying crowd just recently (i.e. my extended family) I also rustled up some caramelised onions and plonked a pot of Dijon mustard on the table to spread upon and fill up with. Something that I am sure would be frowned upon by the aforementioned French Association for the Preservation of the Galette-saucisse but as far as I am aware, they do not have the powers to arrest.

With regards to pairing, I did have notions of introducing some of the Flemish, farmhouse styles of beer or fruity Saisons that are also popular in the north. However, it would be hard to beat a decent Breton cider. Often coming in Champagne-style bottles, these delicate yet crisp ciders are just the ticket to pop and share. The light, apple-drenched Kerisac Bouche Breton Brut I tried would go down very well with some chicken, casseroled in the same cider, or maybe a bucket of langoustines or prawns. But really, sausage and pancakes are the only way forward.

So serve these up for a crowd during the Euros (for any of the French games of course) and you’ll soon be jumping around singing and dancing, to a chorus that goes ‘Galette Saucisse Je T’aime!’ and roughly translates as ‘Sausages in Pancakes? I Love!’

Did I tell you I got an E at GSCE?

Place the sausages on a baking tray and roast for 20–25 minutes, keeping an eye on them, turning and shaking every now and then.

Next, make your pancake batter by sieving the buckwheat flour into a bowl. Add the eggs, oil and salt and start to mix, either by hand or using an electric whisk.

Once it begins to incorporate, start adding the milk, bit by bit, until you have a smooth batter (this process can be done in advance).

Get started on making your pancakes by placing a frying pan on the hob, over a medium heat and add a tiny dash of oil, rotating the pan to cover. Then add a good ladleful of batter into the centre, swiveling the pan around to distribute.

Leave to cook until it browns and easily lifts when using a spoon or fish slice. Flip over and cook the other side through and then place on a warm plate. Continue until all the batter is gone.

When ready to serve, take the sausages out and leave to cool slightly and then wrap them in the pancakes. Traditionally, each pancake is halved first into a half-moon shape and then wrapped around the sausage but this is only necessary if your sausages are steaming hot!

Plate up either wrapped in napkins or plain as, on a platter, for hands to grab and charge glasses with some ice cold Breton cider.