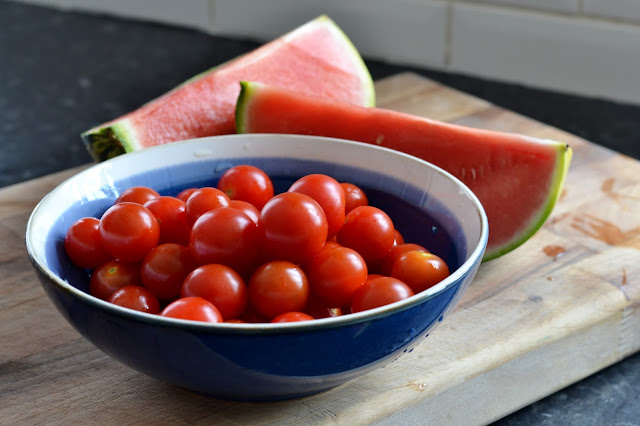 This post first appeared on Great British Chefs  in June, but seeing as it's still quite hot, this recipe should still go down well.

I think, and I say this tentatively by the way, that now June is here, we can officially declare that summer has arrived. Shoot me down if you like, for even mentioning the ‘s’ word, what with all the usual dreaded association of rain, thunderstorms and force ten gales. However, I do honestly believe that we are in for a good one this year. In fact, we are owed some decent weather and with that in mind, I am hoping to get in at least five or six picnics over the next few months. Because there is nothing better than driving out into the countryside, marching into a field in the glorious sunshine and laying out a blanket and marvellous spread; and then digging in and doing battle with wasps.

What to take food wise can sometimes be a dilemma though, purely because some stuff doesn’t travel well. Sandwiches are good but when the rays are beating down, egg mayonnaise is out of the question. Pies with egg inside and scotch eggs are on the other hand, a brilliant idea. Soggy bottomed quiche I find is not. And simple is always best. A ploughman’s with cheeses, some charcuterie, some cherry tomatoes, some celery, some crusty bread and bang, there’s a great al fresco feast for you. But the easy approach can sometimes be boring and it is nice to present something different for the tartan rug once in awhile.

Which moves me onto this recipe for gazpacho, or Spanish chilled tomato soup. But before I go any further I would like to regale a quick story that highlights the dilemma of not listening properly.

Not to mention how some people pronounce certain words.

So, once upon a time, my family and I were all set to join a circle of friends for a Sunday picnic over at our local park, probably for a birthday and the night before, I got a call from one of the other Dads who said ‘Dan, can you bring your gazpacho tomorrow? It’s looking like it’s gonna be a scorcha.’ After putting the phone down I was both flattered and confused. I may well have served it up a few times at home but I don’t ever remember being proclaimed as the King of Gazpacho before. Still, if my mate wanted it, he could have it. After all, it is very refreshing to  sip on lazy afternoons.

We all turn up and everyone is setting up stall, amid usual scenes of chaos and the Dad in question comes up to me and says ‘Did you bring your gaz-bo?’ To which I showed him a thermos flask and with a jaunty shake, replied ‘I certainly did! And it’s called gazpacho.’

‘You know, what you put up in your garden a few weeks ago at your bbq. So the younger kids can sit and play in the shade.’

‘You mean my gazebo?’

Instead of laughter, a quiet awkwardness descended upon us after that exchange. Because my mate was fairly forthright about his own elocution and walked off in a huff, muttering what good would some poxy cold soup do us all. Luckily, it went very well down with every else, being just the ticket to soothe parched throats before corks were pulled and popped. And besides, we had plenty of trees to sit under.

When it comes to gazpacho, there are lots of variations. Typically, for a Spanish dish, there are plenty of arguments as to what constitutes as the definitive recipe. Some regions call for green pepper, to add a touch of spice; others insist on specific olive oil or vinegar. Adding watermelon might be seen by some as a travesty but it really does make for a lighter, more buoyant soup, without having to add any extra water. And having won a cookery competition in the past with this gazpacho, the proof is in the pudding. I should add here that I did this in partnership with food writer Rachel McCormack and it was her idea to use watermelon. I do like to think that my excellent chopping and blending also helped though.

Fresh sweet tomatoes, such as Piccolo, are obviously the prerequisite ingredient for this dish but when it comes to making it, the most important thing is to taste and adjust along the way when blending. And of course, to make sure that it is properly chilled.

Which in turn does sound time consuming but it really doesn’t take that long to knock up a decent gazpacho.

Much quicker than trying to assemble a ‘gaz-bo’ in the garden or in the park (if I had got it right) I can tell you that right now. 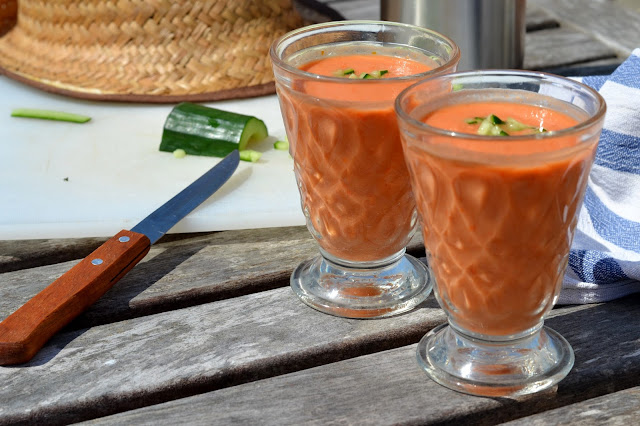 Half a cucumber, finely diced

Traditionally, gazpacho was made using a wooden mortar or dornillo but it’s a lot easier to throw everything into a blender or food processor here. 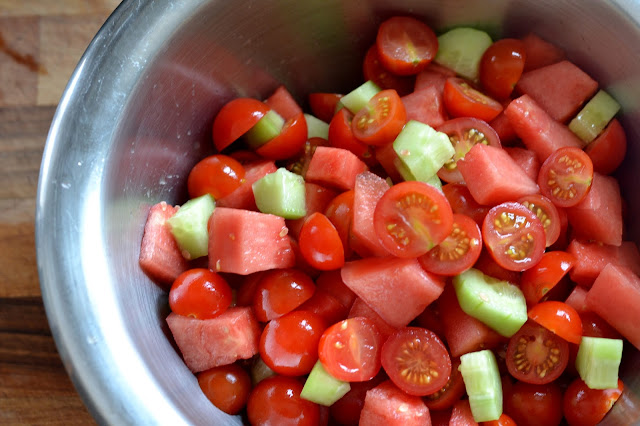 So, first blitz the tomato, watermelon, cucumber and stale bread together and then add a clove of garlic at a time, stopping and tasting in between until you are happy with the level of garlic. I can go for 3 cloves but some people aren’t so enamoured. 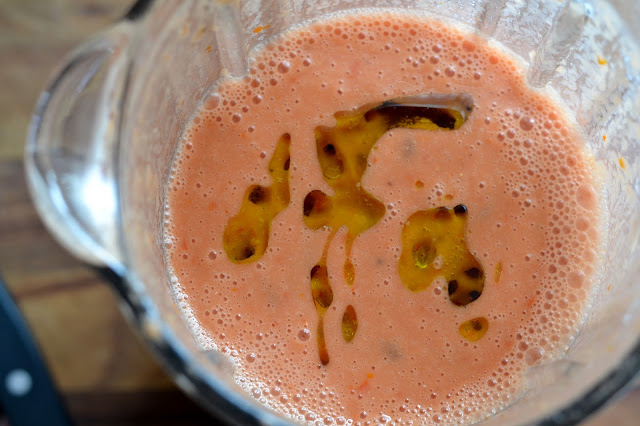 Then add the olive oil and vinegar and blend until everything becomes smooth and creamy. But again, do this in steps to your own taste.

Finally, season with salt and pepper and then transfer to a fridge, to cool for at least an hour.

If you are taking on a picnic, a good tip here is to fill a thermos with ice-cubes and water to get it ready. Obviously, empty the flask before pouring the gazpacho in. 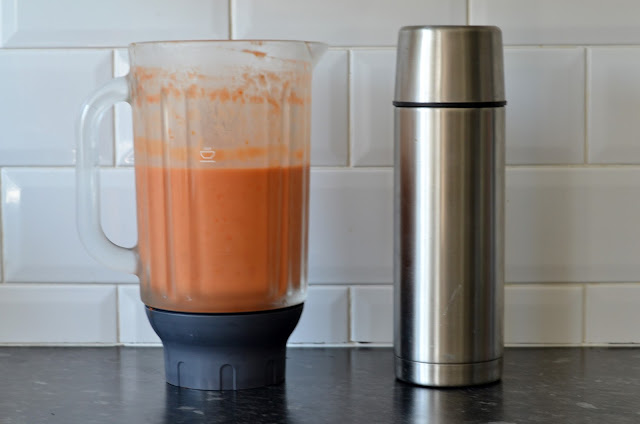 To serve, pour into glasses or plastic beakers for children and top with a small sprinkling of chopped cucumber. 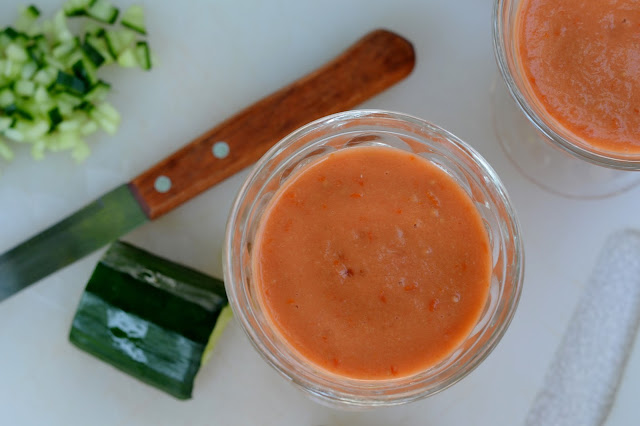