Just recently, an incident happened at the bottom of my garden which in simplest terms can only be described as tomato carnage, on a biblical and catastrophic scale. Without getting too upset about matters, I can only say that someone, or something, deliberately and most maliciously decided to trample all over one of my beloved plants. A plant that was yielding some beautifully formed heirloom tomatoes. Deep-lined emerald jewels that were primed for another month or two bathing in the sun, before transforming, nay, blossoming into voluptuous, juicy fruits.

Now, all is gone. However, if I ever catch the culprit, be it a cat, fox or hedgehog on the make, then retribution will be swift. For I have a water pistol, primed, loaded and ready, by the patio door.

Still, having an unexpected bounty of green tomatoes isn’t such a bad thing really. I quite like them in their unripened state; either in curry, chopped into salsa verde or simply fried for breakfast, along with an egg, sunny-side up. Because they are normally fairly tart at this stage, I also wondered how they would fair in caponata, that infamous Sicilian stew, concocted from slow-cooked and cosseting aubergine, spiked with capers and vinegar.

There are lots of variations out there but the general consensus is to achieve a perfect balance of sour and sweetness through the dish, or agrodolce, as the Italians say. Having tried it out, the green tomatoes certainly delivered an acetic kick to the palate, providing delicious contrast to saccharine shallots and indulgent, melting flesh of the eggplant. So if are growing your own, or can get hold of some, be brave and snip a few off early. It’s definitely something different to try out.

On a warm summer’s evening, this sort of caponata would go down particularly well with friends, served on bruschetta, drizzled with oil and parsley, and washed down with a crisp, dry white wine. And if, whilst eating, you happen to spy a devious, malformed, hairy looking creature who happens to go by the name of Fred. Sat there, looking all smug and complacent, whilst perched on the fence.

If you could only manage to grab the water pistol without him noticing. Just this one bloody time.

Then that would be just perfect. 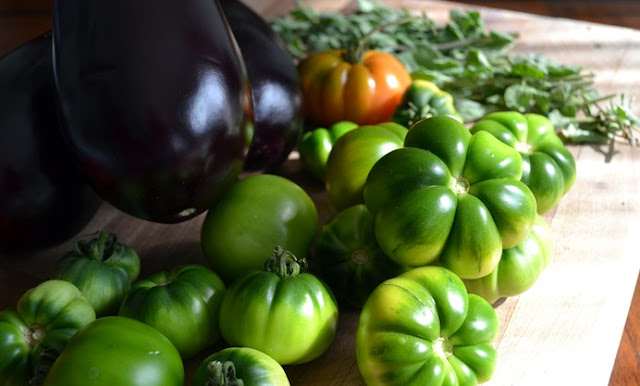 First take a saucepan, place it on the hob over a medium heat and add the olive oil. Once it has warmed up, add the diced aubergine and stir before dropping the heat a touch. Cover and leave the aubergine to cook for 10-15 minutes, checking to stir every now and then, in case it catches, until it becomes soft

Remove the aubergine with a slotted spoon (there should be some oil left in the pan) and put it briefly to one side in a bowl. Add the sliced shallot and celery and again stir through and cover, leaving to cook for 10 minutes 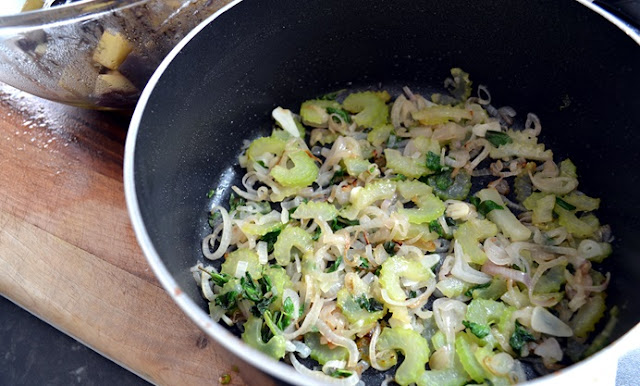 Take the lid off and add the garlic and oregano. Stir, cooking off for a minute or so, then add the tomato and the vinegar. Cook off for another 10 minutes before adding the aubergine back to the pan, along with the purée and the capers. If the mix begins to look a bit dry, add a touch more oil.

Leave everything to gently simmer for another 15 minutes then take off the heat. Everything should be quite soft and glistening by this point and will do well if cooled on the side and left to steep and thicken for a couple of hours. 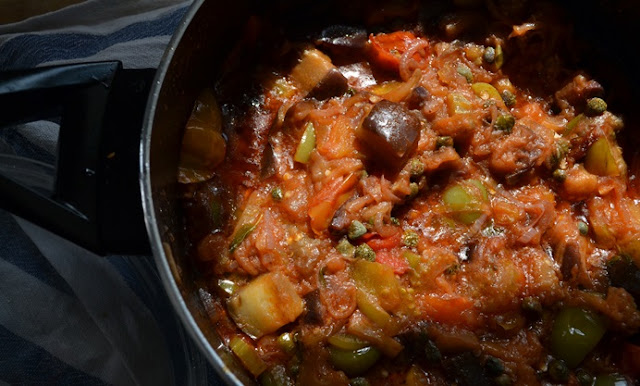 When ready to eat, place a frying pan on the hob and drizzle your slices of sourdough with oil and quickly toast in the pan in batches. Keep the bread warm as you move along. 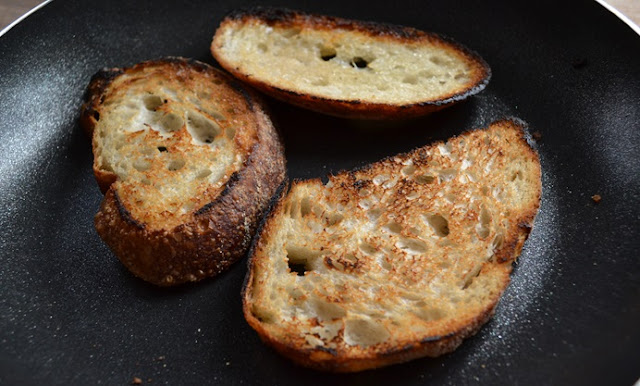 To serve, spread the grilled bread onto a platter or wooden board and spoon a generous amount of caponata on each piece. Finish by drizzling with more oil and sprinkling parsley all over the top to messy effect. 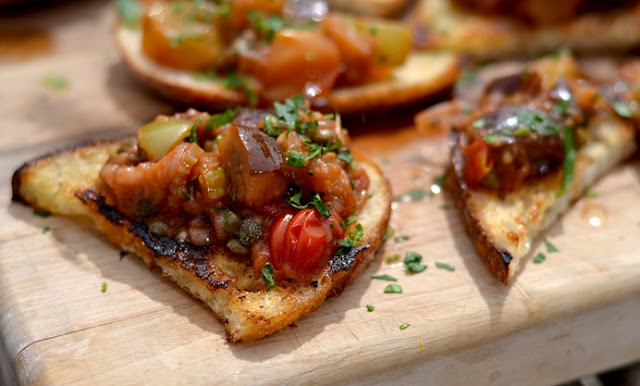 Saucy Siciliana said…
Caponata is our national treasure here in Sicily:)
28 October 2016 at 19:39

Alicia Foodycat said…
I love this idea, but several years of tomato blight have made me give up on them!
28 October 2016 at 21:40

Alicia Foodycat - You've given up on tomatoes? Or just growing them?