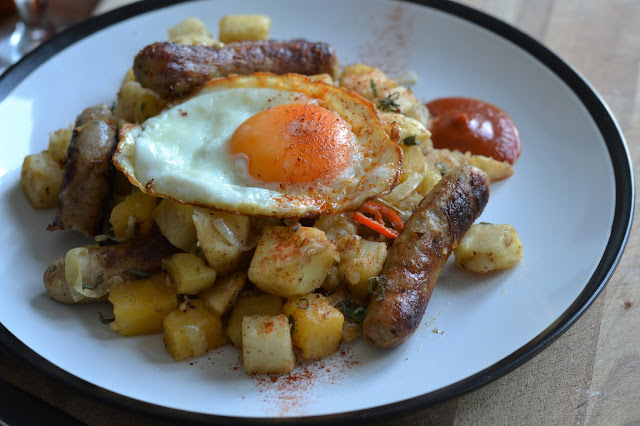 Making a hash of things, by very definition of the phrase, should be easy enough to do. Yet I would argue that it's not. It's actually hard work. Especially when you decide to make one from a variety of root vegetables such as swede, parsnip and celeriac. Good grief, my poor hands, they took a battering the other day. I may as well have tried to cube up a railway sleeper with one of those orange, plastic, shatterproof rulers, that we all took to school in the 80's. The swede was the worst. With my knife firmly wedged halfway through the blighter, I held it up as a sort of weighty, bulbous trophy and wondered if it would ever come unstuck, ever again. I even thought about glazing it in some sort resin and sticking up on the shelf. A piece of artwork, titled - 'The Swede That Won.' Perhaps I should get my trusty chef's blade reground.

Anyway, this is probably a good reason why the majority of recipes for hash call for softened leftovers, when all the cooking and the labour is done. Usually by somebody else. I am of course talking about that frugal mashup of vegetables here. In case you were wondering. The hash that is the more robust cousin of bubble and squeak. Enjoyed with protein, normally corned beef and a wibbling fried egg set atop.  Not the other hash. Nooooo. And with Bonfire Night fast approaching, when debbie and andrew's approached me and asked if I could come up with a tasty and easy dish that could be slapped on the patio table, all sizzling and hot, a hash immediately came to mind. To conjure up a few more 'oohs' and 'aahs' from the crowd, as rockets fly up into the air.

debbie and andrew's are of course in the business of making sausages. With an intention on creating the perfect banger that is so fevered, so devoted, they often forget to put caps at the start of their names. Meatier than most supermarket offerings, they have now extended their range into the heady realm of the chipolata, a little upstart of a sausage that packs in a flavour that belies its size. When testing, notes of pepper, mace and coriander danced about my palate, after I elegantly wolfed them down. The best thing I found about them is that they are quick to cook and because you get more of them in a pack, it really doesn't matter if one goes missing during the process. If you know what I mean. Two will get you caught out though.

Coming back to the notion of the hash itself, because it is usually cold on these sort of evenings, I decided to inject a bit of heat into proceedings, by giving the root veg a healthy sprinkling of garam masala and a few slices of red chilli. In my efforts to get the kids to up their appreciation of the Scoville scale, I've slowly been adding a touch more capsicum here and there, and I am really pleased that they that they dug into their plates without crying this time. The addition of a fried egg always helps. I mean, who doesn't like a fried egg? But if you reach for debbie and andrew's sausages with dietary requirements in mind, just dispense with the ol' sunny side up.

The recipe below caters for a large group and you will need to find a platter to stack upon this joyous mountain of pork, soft onions and sweet tubers. But you could easily size it down. I made and served ours up in my fairly mahoosive paella pan (you could easily do this with roasting tins) and after giving it a final stir through, some of the chipolatas did break into pieces. Which doesn't matter, the final result is no less theatrical. Morsels make it more easier to eat, if anything else.

To give this a real sense of showmanship though, may I suggest you take your swede and gather friends and family around? To watch you decimate it with an axe, before light falls? The cubes probably won't be so even and you will probably end up with a very lopsided brunoise but you'll get the job done.

Or you could simply make sure that your knife is sharp.

Serve each portion with a fried egg, if wanted, and a dollop of Siracha.

First, turn your oven on, up to 180C and put your cubed root vegetables into a large stock pot and cover with water, add a good amount of salt and place on the hob, bringing to the boil and then reduce to a simmer. You will need to cook for about 20 mins until the cubes soften but not too squishy. Saying that, if they do start to fluff up, this does add a nice crispness to them.

Drain in a colander and leave to steam for another 10 minutes.

Meanwhile, place the chipolatas into a roasting tin into the oven and bake for 12 to 15 minutes, shaking them about every now and then, so that they nicely browned and cooked through. Take them out the oven when done.

Place a large frying pan, the biggest you've got or a large roasting tin onto the hob, over a medium heat and add the oil.

Throw in your onions and stir fry until soft and golden, takes about 10 minutes and then add the chilli and garam masala and cook through for another couple of minutes.

Add the cubed root veg and turn the heat up a touch and continue to stir through, so that it all heats up and starts to catch. This takes about 10 minutes.

Next add the sausages and the sage and stir through until everything is piping hot. Like I said, some of the chipolatas may break but this doesn't matter.

Serve steaming in bowls, with fried eggs or not (in fact, poaching a load of eggs might be easier) and a dash of chilli sauce.

Unknown said…
oh yes! loving the swede and celeriac in there, that's stunning. need this on Saturday,
4 November 2016 at 08:35