How To Make The Perfect Brewers Goulash by Budweiser Budvar

There are many things that I like to get up to in the kitchen, some activities which could be regarded as questionable (I bottled up some elderberry and banana wine yesterday) but one of my favourite pastimes is to chop and macerate garlic in salt. A technique that is slightly laborious but one that yields a much better result than say, mangling cloves through a garlic press. I used to love my garlic press but after realising that it really is useless piece of kit, leaving behind more garlic in that mini holed shovel than is actually pushed through, I now resort to crunching and schmooshing garlic on a board with salt. And a butter knife. It's quite stress relieving really. To watch the physical transformation, as hardened chunks turn into a sort soft of melting paste. Plus the releasing oils and aromas seem to be a lot gentler on the nose. No burning nostrils with one eyelid flapping in the wind when you do things this way, I tell you.

So yes, this method is best and if I were to cast my mind back to when I first heard of it or saw it in action, then I would have to mention my father-in-law here and I have to be careful, because he wasn't too fond of the way I described him last time around. A loud and gregarious man, whose head all often hits the ceiling, Pete has what I'd call a quiet and understated passion for cooking. I say quiet, he moans about having to do it. But secretly, I believe he loves it. Whenever we pop over to the house, I am often quickly ushered into the kitchen to check out a new jar of something he's found along the way. Offered usually, after he's dipped one of his huge digits in first to taste. Or there will be a new cheese to try, a strange pickle to sniff or some curiously alcoholic to sip. And if he is cooking, especially řízek, there will be a large, if not mountainous mound of pale yellow garlic on the side; that has been pounded with salt, using the back of that butter knife.

Mentioning řízek, which is the Czech version of schnitzel, that virtuous pounded meat coated in breadcrumb affair, was a deliberate ploy; as I've been thinking of ways on how to link to the title of this post. Pete, though born in this country, is of Czech stock and the garlic schmooshing technique was one that was passed down by his father, another man also who apparently loved his food and ahem, slivovitz.

What follows then is a video and a recipe, which shows how to make the perfect Brewer's Goulash. Originating in Hungary, goulash is another dish that has many interpretations but in this case, it gets the special treatment from a chef called Luděk Hauser, who was born and bred in Budweis, South Bohemia. The recipe is simple enough, asking just for an element of patience and time and the principle ingredients are beef, paprika and beer, in the shape of Budweiser Budvar ‘B:Original’. I supposed it wouldn't be a 'Brewers' goulash otherwise.

On first watching the video, which is part of a series of Czech Stories commissioned by Budvar, a few on-screen moments resonated. Pictures of cobbled streets and squares lined with grand Baroque buildings brought back memories of my own visits to the Czech Republic. Well by that, I mean Prague. I have been a few times now and despite the encroaching wave of tourism and all that comes with it, I still think that it is one of the prettiest capitals in Europe.

Cuts to glasses of beer being poured, a familiar pale golden Pilsner with the requisite frothy head, reminded me of particular visit to a bar in Prague with Mrs FU; complete with Oompa band (yes, tourism) and an afternoon filled with laughter. The waiter pencilled down I don't know how many strikes on our paper tablecloth - large ones for beer, small ones for shots of this strange looking brown stuff - but I do remember wandering out into the dark, cold night, feeling extremely...happy. We looked up to the stars, then kissed and staggered off to somewhere else, totally in love.

Then Luděk started doing that schmooshing thing with the garlic, which sort of brought me back full circle. 'Oh yeah, that's exactly what Pete does,' I thought to myself. 'It really must be a Czech thing.' Which it's not. But it's funny how a short narrative and a flash of images can ping up memories and random thought processes. He says, whimsically.

I suppose what I am trying to put across is that in watching the film because of the treatment, especially with the garlic (I won't say schmooshing any more) and my own personal connections to it, I was like "Ah yes! This is the real deal. This is authentic. This should taste good."

And it does. You do have to be careful with the fresh horseradish though. Too much can blow your mind. More so than the chilli. But give it a fair grating, as the punchy hit of of this root marries well with the depth and richness of the meat and thickened, slightly velvet sauce that clings to it.

Of course, the final dish is to be enjoyed with a Budvar too.

Perhaps just the one though, Otherwise your brain may get too...schmooshy.

Peel and dice the onion into medium sized cubes, and sweat down gently in the fat until golden brown. Don’t let it catch or burn. Slice the meat into 4cm cubes and season with salt and pepper.

Add the beef to the pan, and turn until the beef is light brown on all sides.

Then add the tomato puree and – after a moment – the sweet paprika and stir, being careful not to overheat or burn the paprika.

Pour in the stock and the beer, stirring well. Then slice the garlic and crush it together with the salt to make a paste, releasing the oils. Add half of this to the pan before shaking in the cumin and chilli powder.

Bring everything to the boil, then reduce the heat, cover and simmer for at least two hours. Check the tenderness regularly by hand and, when the meat starts to soften and become tender, you are almost ready to serve.

Finely grate the sourdough bread and add to thicken the sauce. Then stir in the chopped marjoram and the other half of the garlic-salt paste. Taste and season with salt and pepper, if required.

Ladle into warm bowls and garnish with grated horseradish, finely sliced red onion, a whole chilli pepper and the parsley. 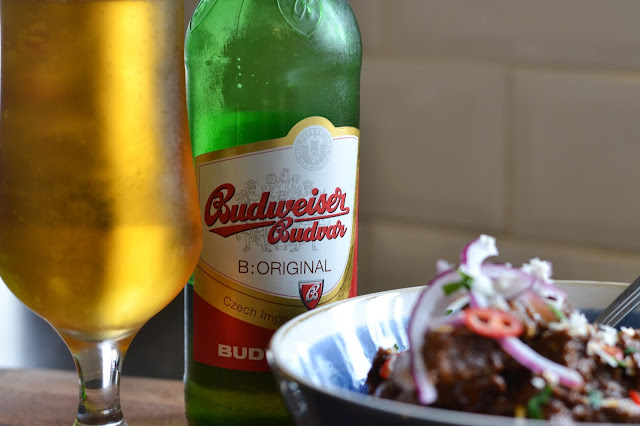 Alicia Foodycat said…
From the thumbnail pic, with the fresh chilli and herb sprinkle I'd assumed this was going to be a South East Asian dish. Nothing of the sort of course, but it sounds brilliant.
2 December 2016 at 17:48