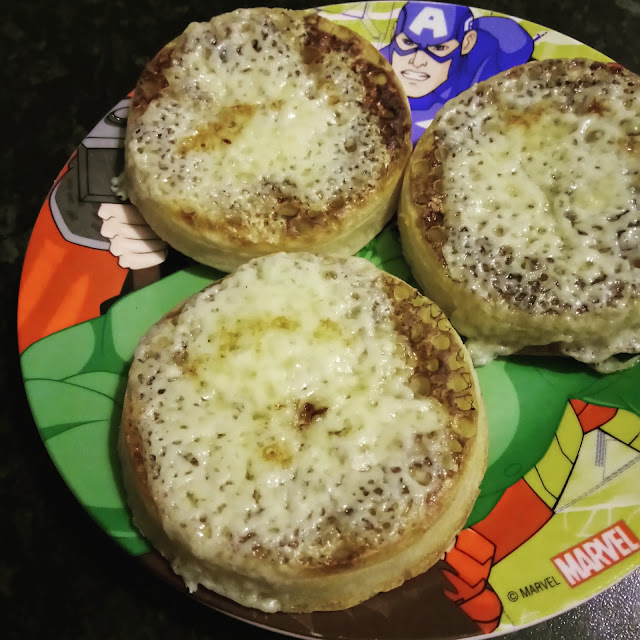 The one thing that I really love about this marvellous world of food of ours, is that it is always full of surprises. Surprises that can be found around the corner, down alleyways, up trees and well, everywhere really. My gob is perpetually smacked and I am forever learning, and I suspect that I will never ever stop. But nothing is more surprising than when you commit what seems to be a regular and fairly innocuous act and discover that for some, it amounts to some new culinary daring, a revelatory tick in the box, or eureka moment.

'Really?' I think to myself when it happens. 'I thought everyone did this?' But of course, we are not all the same, sadly. We all have different backgrounds, viewpoints, foibles and stupid, idiot opinions. Which is not to say that we shouldn't all try to get along though. The greatest challenge of the 2017 will be for us to unite, as a human race and put aside the inequity that casts a gloomy shadow over us, once and for all.

And now I am detracting, as per usual. Let's get back to the matter in hand. Namely crumpets and what you should put on them.

So yes, it all started with my slightly boastful, and not to mention greedy, shout over social media, that I was dining on toasted crumpets. With Captain America, at 10 in the evening. I also went the extra mile by grilling some cheddar on top and spritzing with Worcestershire sauce. Because eating late in day wasn't bad enough, I had to ensure that the nightmares would descend once I'd gone to bed.

After hitting send, immediately a chorus of 'Cheese on crumpets?' appeared. Yes, for a large number (roughly three people) this was apparently unusual in the extreme. Crumpets should only have a sweet sort of condiment as a topping by all accounts. Such as jam, or honey, or jam. The notion of popping on a savoury crown simply hadn't occurred to them. At the risk of sounding like a shill, I very nearly suggested to all three that they should head down to Dirty Bones in Shoreditch and try their frigging amazing crumpets, topped with slow cooked short rib, hollandaise and poached egg. Further education wouldn't even begin to describe this wonderful dish. 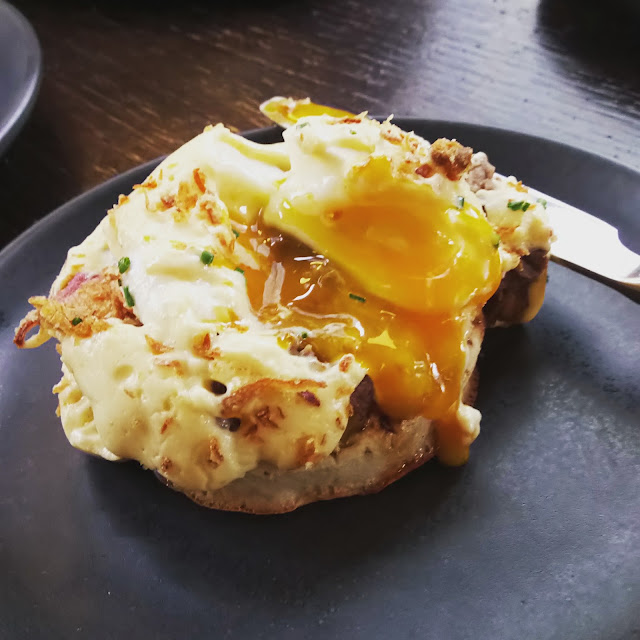 But I didn't. I simply went to bed and woke up several hours later, screaming in sweat-soaked sheets. Because Gordon Ramsay was chasing after me, around the cobbled streets of York, with a large satsuma in one hand and a leather paddle in the other.

It did prompt me to think deeply the next day though - what is the strangest thing that you can put on a crumpet? Were there any boundaries or no-no's to consider when it came to dressing this pitted patty of joy? Or could options indeed be limitless?

In the spirit of investigative and serious food journalism, I decided to ask Twitter and as a result, I've thrown together the following montage; a Buzzfeed-lite breakdown of opinions. You know, the sort of stuff that gets considered as serious, investigative food journalism these days.

Here are my findings, with accompanying annotations, insights and appendices, in no particular order: 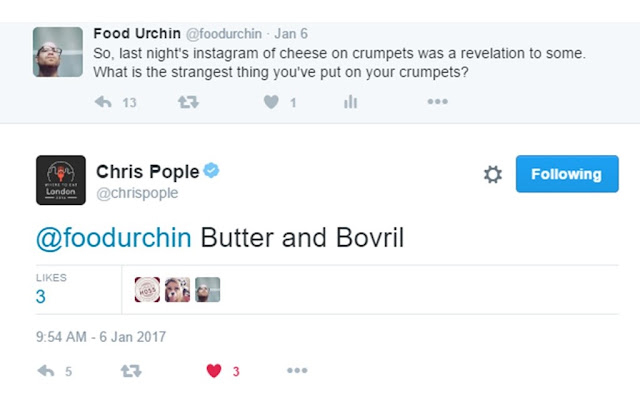 It was Chris Pople, prominent restaurant blogger and self-proclaimed time waster, who responded first, with a proclivity for Bovril. Showing that a) he was from the North and b) has an unhealthy interest in beef. But as starters go, it was a fairly tame start, to start things off.

Then came KBfoodphotos, or Katie as she is also known. At least she agreed with me and upped the ante with the suggestion of Marmite AND a poached egg. I am not sure if we can get away with using the word 'crumps' though. Far too blaady middle clarse.

Connie, of Connie Consumes, then came flying in, echoing the use of Marmite but it had to be New Zealand Marmite and not Austalian Vegemite. She took great pains to stress this and heaven forbid anyone who confuses this.

The whole Marmite/Bovril/Vegemite conflab then got a touch ugly, with Oliver Denton stating that Bovril led you onto murkier paths and like Zammo, we should 'Just Say No'. Either that or he was stating that Bovril was readily available at a now defunct supermarket chain. Perhaps he should lay off the stuff. 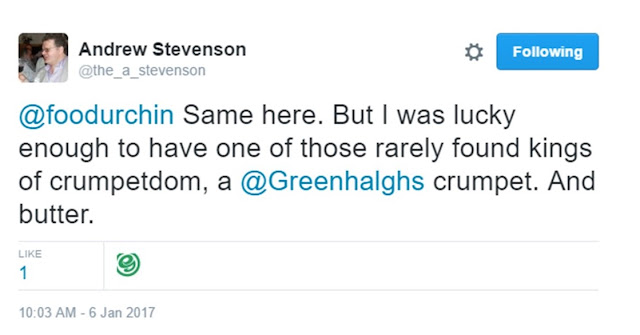 Soon, the quality of the crumpet itself was brought back into question, and food writer and proofreader Andrew Stevenson had much to say for Greenhalghs. Who by all accounts are crumpet royalty, offering crumpets that are twice the height of normal crumpets, offering maximum butter soak-up-ability. This was important but where could you get them from?

Thankfully, my good friend Cookwitch then interjected, saving me having to use my podgy fingers on the keyboard and actually having to Google something. One day, I shall try these hallowed crumpets.

Then entered Christina McDermott, a woman of excellent and rather saucy taste and I was rather taken with her application of fiery pepper sauce to crumps. I mean crumpets. Apparently, this can be eaten 24/7 and without any reasonably harsh side effects, Useful to consider in place of cheese then.

And then more and more suggestions came pouring in, like this one from Nilanjani. Another spice-led effort maybe but slowly but surely, the true universal appeal of crumpets and ubiquitous application of toppings began to shine through.

Although I get the impression that by this point, some people were simply jumping on the bandwagon and copying. Like Garlic Confit. I am surprised that he didn't mention aubergine really.

Seemingly not wanting to let go of the Marmite/Bovril/Vegemite debate that was also now ensuing, Chris Pople then put his head back in the room and came up with a way of pissing off Australians by pronouncing Vegemite like 'Yosemite'. It detracted from the main line of inquiry but it was very funny. 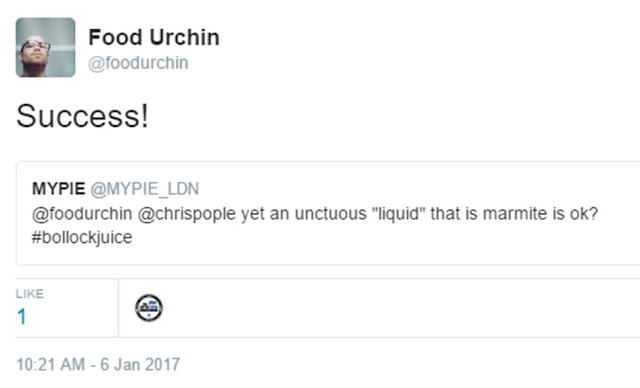 Lest we forget another savoury paste, Gavin Baxter came up with the notion of Gentlemen's Relish and given that, in a way, this is supposed to be a celebration of all the good things that you can put on crumpets, this was a fantastic suggestion. But only if you like a hefty whack of anchovy on the tongue.

This idea from Gem, or Tattooed Truffle, was also innovative. Yes, it moved things back into sweeter territory but this alerted me to the concept that crumpets could, if fancied, be dunked into tea. Which would represent a brave new step for mankind.

And the march of progress continued with Leyla's confession that her 'other half' liked to make pizzas with crumpets. At last, we were getting somewhere. Revolution and vicissitude suddenly came bounding into the horizon. A new dawn, a new era for the humble crumpet was beginning to break.

But then the nihilists arrived.

And the food stylists, clutching swathes of furry string.

It didn't take long for the depraved and perverted to poke their noses into my crumpet business either. 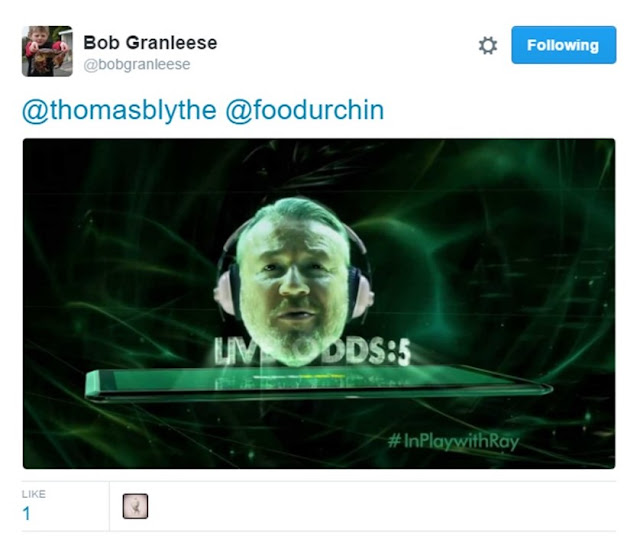 Nor the cider wurzels, who had wandered into the wrong room altogether, looking for the loo.

But it was when the traitors started arrive, it was then that I knew my quest of discovery was over. I have no truck with these inferior pancakes, these skinny and pocked adolescent upstarts. A packet of six crumpets constitutes as fine and filling meal. But six pikelets? Pah, I'd breathe them in. 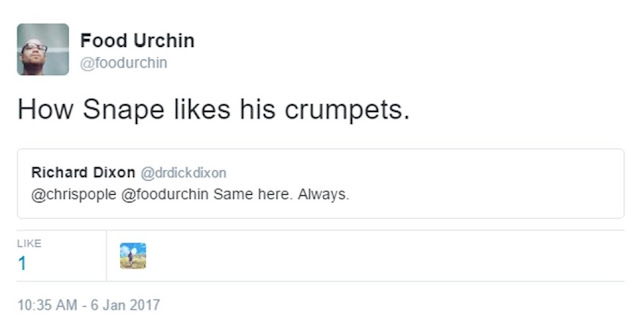 Although I did manage to get this sneaky sub-tweet in. Which Richard got (phew). 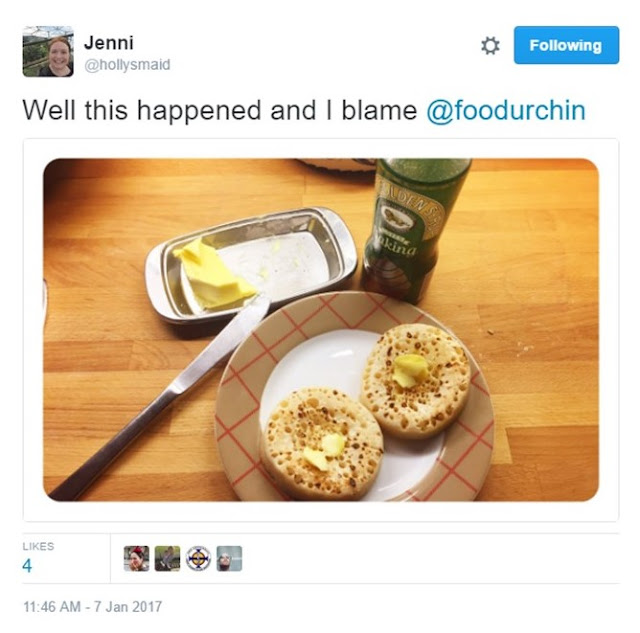 And I did do my bit for crumpet marketing in the UK, enticing Jenni into having this fine and healthy breakfast, based largely on white bread, butter and sugar. Which prompts me to ask: Warburtons, do you want to give me a job?

As investigations go and under the guise of SnGs, the whole episode was informative, I suppose. It certainly showed that we have quite the love affair with crumpets in this country. No wonder the industry is worth £88m. That's a lorra lorra crumpets.

But I have to admit, I did feel slightly deflated at the end. Surely we could stretch our imaginations just that little bit further than this? I am not sniffing around or pitching a book based on crumpets by the way (well, maybe I am). It would just be good to see a touch more originality and ingenuity when it comes to the treatment of the humble crumpet. At least with the toppings.

However, all is not lost. When the chips are down, fate often has a habit of shining a light into the darkest corners, to deliver hope and faith. Am I using crumpets as a metaphor for the current state of the world here?

Yes, yes maybe I am. Because this morning, I bore witness to a crumpet topped with Marmite beans, cheese and Twiglet crumbs. Totally amazing.

The future can be great folks. We just need to open our minds. And eat more crumpets.

Ginandcrumpets said…
I missed a crumpet discussion? Unbelievable. My vote is for butter and golden syrup. it turns into a syrup sponge. Delicious x 1000.

And yes, I have had gin and crumpets. T be specific, a martini with a side of buttered crumpets. Not that great a combination, as it turns out.
11 January 2017 at 13:04

Food Urchin said…
Ginandcrumpets - I thought that you were curiously absent during the discussion. How many gin soaked crumpets had you had the night before?
11 January 2017 at 13:53

Alicia Foodycat said…
Is Bovril as a spread a northern thing? My husband introduced me to it so I assumed it was South African.

A well-buttered crumpet, with bovril or vegemite (I am not a fan of marmite) and topped with a fried egg is lovely.
13 January 2017 at 09:04

Food Urchin said…
TrollGerl - Oooommmmmmaaagherd! Thank you for revealing this to me!

G said…
I noticed the loaf as well - that looks awesome! (off to google a recipe for crumpet loaf - is the same stuff just in a load tin?)

I have this argument with my wife all the time - she is a 'sweet stuff only' advocate and constantly castigates me for putting marmite on crumpets. I might try the addition of an egg.

Do you reckon you could make bread and butter pudding with crumpets? And more to the point, should you?
13 January 2017 at 10:45