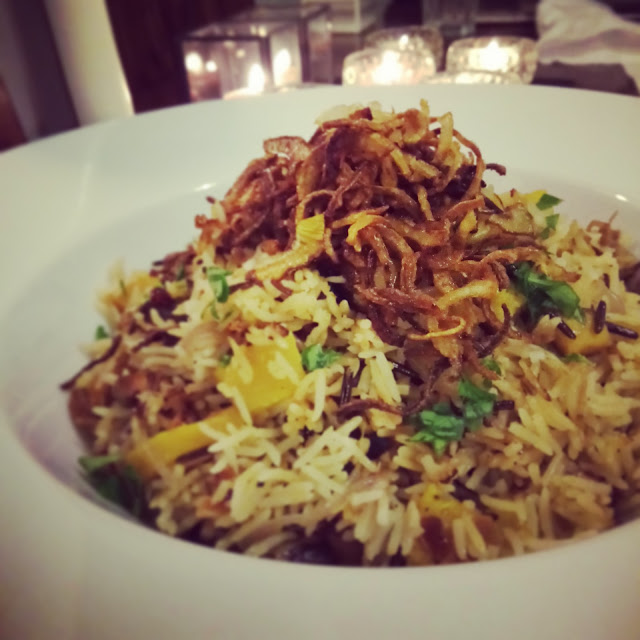 I did it. After wittering on about eating less meat in this New Year's post, I finally did it and made something that did not include any animal parts or meaty flavourings. Which sounds awful because we don't continually gnaw on bones at home. Far from it. We do have a fairly balanced diet. But the big thing here, is that I made this jewelled pumpkin rice for Sunday dinner. Yes, no traditional roast beef/pork/lamb. No gravy, gloriously imbued by the juices of said roast. And no roast potatoes either, crisp and oh so slightly burnt. They will make a return, the roast spudlies. Don't you worry about that. I'll be damned if I am going to give them up, despite what the government says. In the words of actor, Stephen Mangan -  'I'll give you the burnt, crispy bits off my roast potatoes when you pry them from my cold, dead hands.'

This fragrant and warming dish, a recipe from the brilliant Moro East and one that I have been coveting for some time now, is a great alternative and a superb pick me up after going for a winter stroll, in the driving rain. A decision that was met with derision at first - 'Holly, it's pissing down!?' Although I am glad I was convinced. We all returned, totally soaked through and with drips cascading from our stuffy noses. But after living in the area for 14 years, we discovered some new territory; a parkland walk close to a swollen river and the children came back with that lovely rosey glow on their cheeks. All in all, it was good, healthy stuff.

With the typical East Mediterranean flair that you find in this cookbook by Sam and Sam Clark, noses were soon cleared as the scent of roasting squash came flooding into the kitchen, along with notes of cinnamon and rose water. The latter a deviation from saffron, because we didn't have any in the cupboard (don't you just blaaady hate it when you run out of saffron?) and as such, the recipe that follows is slightly different from the one in the book. I also used a variety of squash, such as carnival and sweet dumpling, bought from the INTERNATIONAL SUPERMARKET. 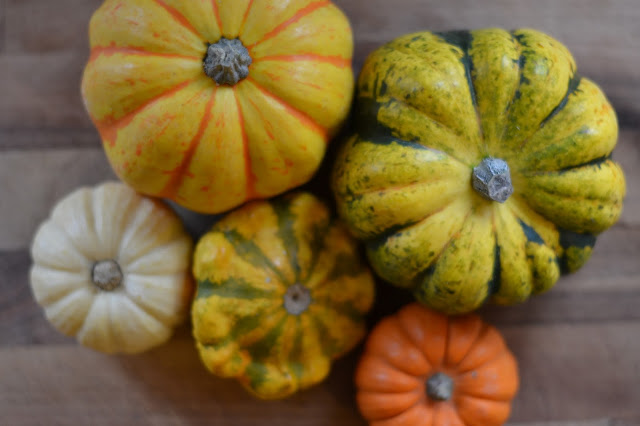 The best part though, had to be the smell of deep fried onions, a suggested recommendation that rounded off things nicely. When deep frying onions in a small-ish saucepan, filled with hot and volatile sunflower oil, it does pay to pay attention to the amount you throw in at any given time. It really is best to do small amounts, as my first fist-full nearly amounted to an overspill and subsequent fireball. Thankfully, damp tea towels were close to hand. Some of us clearly remember chip-pan disasters of the 70's.

So just remember to go easy when deep frying your onions. Because burning down your house is going to have a far more detrimental effect on your health, than actually eating them will. 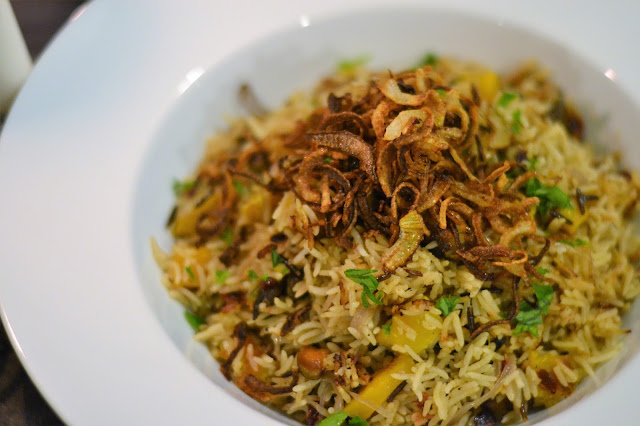 First, make the crispy onions. Heat 8-10mm depth of vegetable oil in a wide saucepan over a high heat. When it is hot but not smoking, add a 1cm layer of the shaved onions and reduce the heat to medium. Fry, stirring often, until they are an even golden colour. Drain and spread out on kitchen paper to cool, then repeat the process (you may need to top up the oil) until you have used all the onion. 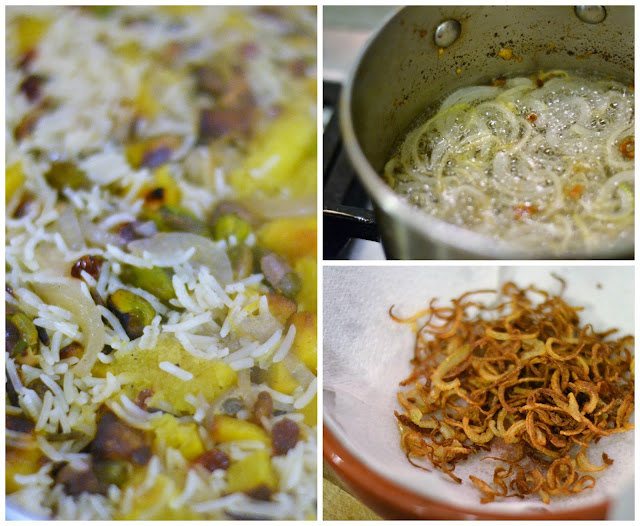 Preheat the oven to 230C/gas mark 8. Toss the diced butternut squash with half of the salt and the olive oil. Spread it in a single layer in a baking tray and roast for 30 minutes until tender. Melt 25gms of butter in a saucepan and add 3 tbsp of rose water, mix and set aside. Heat the remaining butter in a medium saucepan with the cinnamon and allspice until it foams, then add the onion and ½ tsp of salt. Fry over a medium heat for 10-15 minutes, stirring occasionally until the onion is soft and starting to colour. Add the barberries, pistachios and cardamom and cook for 10 minutes more.

Now drain the rice and add to the pan, stirring for a minute or two to coat, then pour in the stock. Taste for seasoning, then add the roast squash. Cover with a circle of greaseproof paper and a tight-fitting lid and cook over a high heat for 5 minutes. Reduce the heat to low and simmer for a final 5 minutes. Remove the lid and paper and drizzle with the rose water and melted butter. Replace the lid and leave to rest, off the heat, for 5–10 minutes.

Serve in warmed bowls, with a generous helping of crispy onions on top and a scattering of the coriander. 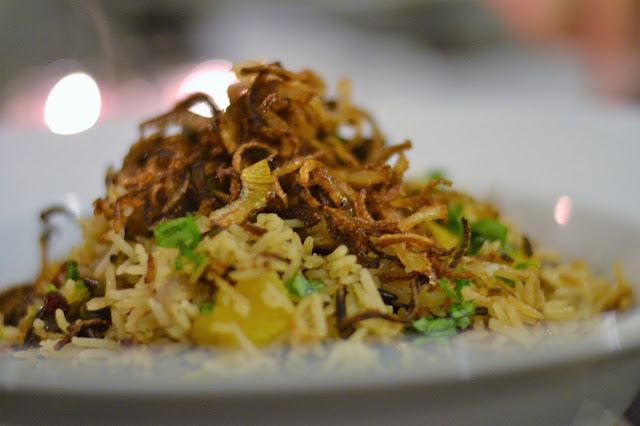