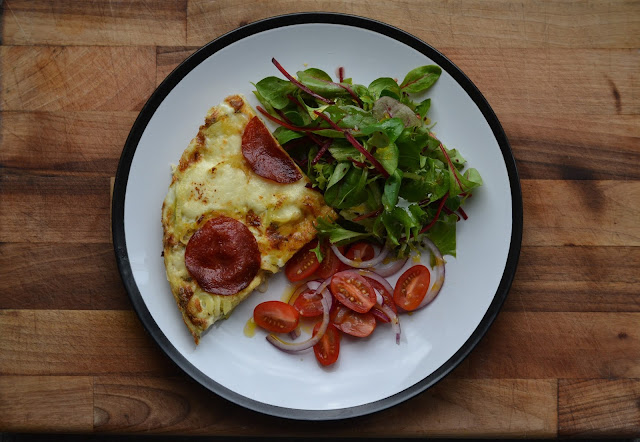 We’re not even halfway through January yet and if you are anything like me, you may already be experiencing a certain malaise, or discomfort, with regards to the boom of healthy eating and exercising that traditionally explodes during this barren month. Inboxes get filled with diet plans, celebrities in spandex suddenly appear everywhere and all those gym bunnies begin to whinge on social media, about the new influx of resolutioners clogging up the Stairmaster. It’s fairly awful really. I mean it only feels like yesterday, when I last legitimately hunkered down on a turkey, Twiglet and whole Camembert sandwich. I mean seriously, do we have to go through all this?

Gadgets that are supposed improve, slim down and tone our portly bodies are probably my biggest pet hate. Objects of pain and misery, such as the ‘Abdominator’, the ‘Buttotromaphon’ and the ‘Spiralizer’. Oh yes, I spent the best part of 2016 positively sneering at that last piece of kit and the suggestion that ribboned beetroot is a fine substitute for pasta. The accompanying vapid, beatified smiles, airbrushed skin and general nutritional mumbo jumbo also got to me too. However, that is an easy thing to do. Especially when you look in the mirror and see Phil Mitchell staring back at you; in his pants and dressing gown, holding a doner kebab, with extra chilli sauce.

Yes, I must do something about my breakfasting this year, at the very least.

Then, during the Christmas break, I bought a spiralizer on a whim. And reader, it changed my life. Well, it changed an afternoon really, as I sort of plummeted into a frenzy, spiralizing whatever I could get my hands on. Carrots, potatoes, cucumbers, aubergines, salami, the lot. My wife walked into the kitchen after getting home from work and saw mounds and mounds of twizzles and noodles everywhere. She was carrying a Christmas pudding, a gift from her boss, and I spiralized that too. It didn’t work very well but I was thoroughly turned on by the limitless opportunities a spiralizer could bring.

As an aside, I do get the whole deal behind them. Spiralizers volumise, giving the impression on plates that you are eating a big portion, when really it’s quite small. A useful aid when you are trying to lose weight, although small is not the word I’d use to describe the bowl of julienned potato I had leftover. You could reach the ceiling with just four spuds and after realising that I was making a wasteful mess of everything, I finally got down to doing some cooking, frying the potato off with some curly wurly onion and garlic. I then thought about adding some eggs, to bind everything together, with a dash of herbs and suddenly, we were heading into ‘frittata’ territory; that Italian go-to for fixing up (and quite often using up) something quick.

Up until that point, it was all looking quite healthy actually. But then I went and spoilt it all by doing something stupid like adding pepperoni and mozzarella. And lo, the Spirafrizzata was born. An open omelette, with noodled vegetables inside and spicy meat and oozing cheese on top.

It has become quite a hit in our house and if you are looking for an antidote to lift you out of the January blues, I am sure it will go down well in yours too.

And if you are trying to be good but getting peeved by those gym bunnies, tutting impatiently behind you, as you struggle to dismount the ‘Glutifaxicator’, just remind them that they were more than happy to use your pub in December. Before smiling and walking off with your tupperware box; full of spiralized radishes, spiralized bean sprouts and spiralized Toblerone.

First, you need to have a merry old time spiralizing your vegetables. So whizz your potatoes, courgette and onion through whatever spiralizing contraption you can get your hands on. You could always use a julienne blade on a mandoline, but you won’t have half as much fun. 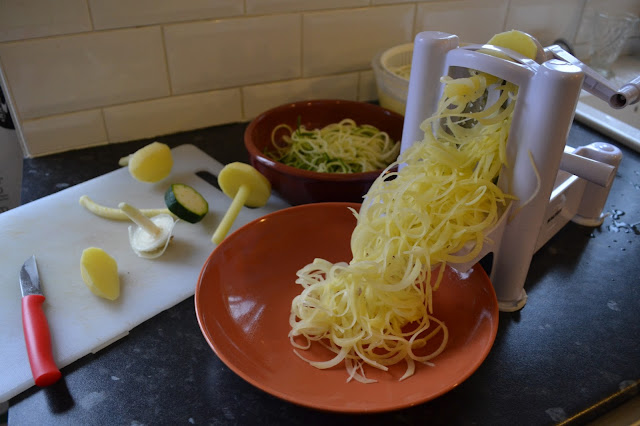 After doing the potato ribbons, give them a quick soak in a bowl of cold water to remove excess starch. They will stick together when you come to cook them otherwise. Rinse, drain and dry in a colander or give the potatoes a spin in a salad spinner.

Next, place a non-stick frying pan on the hob over a medium heat, add 1 tbsp of olive oil and warm up before adding the onion. Gently stir for about 5 minutes, before adding the chopped garlic. Fry for another 2 minutes.

Scrape the onion and garlic out and place in a small bowl. Place the pan back on the hob, add the remaining 2 tbsp of oil then add the potato.

Turn the heat up a touch and briskly stir-fry the potato ribbons so they begin to soften and colour. Once they do, add the courgette and stir to combine. This can be tricky, so it helps to employ a fork to mix the two together. 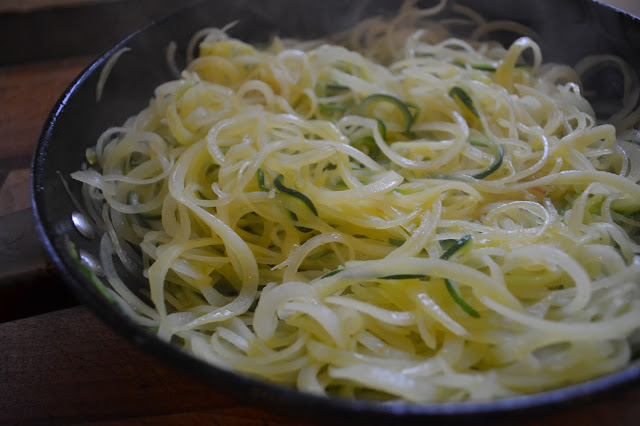 After a couple of minutes, add the onion and garlic and again, stir through to combine, using a fork if necessary. Turn the heat down and leave to cook for another 2 minutes.

Crack your eggs into a bowl and whisk together. Add the oregano and season with some salt and pepper before giving the eggs another good mix.

Next preheat the grill in your oven to 200°C.

Pour the eggs all over the softened vegetables, giving the pan a gentle shake to make sure you get a nice even distribution. Leave to cook through from the bottom upwards – this takes about 10 minutes.

The top will still be a little bit runny after this time, so place the pan under to grill to firm up and finish cooking. Keep an eye on it though, as you don’t want it to brown too much. 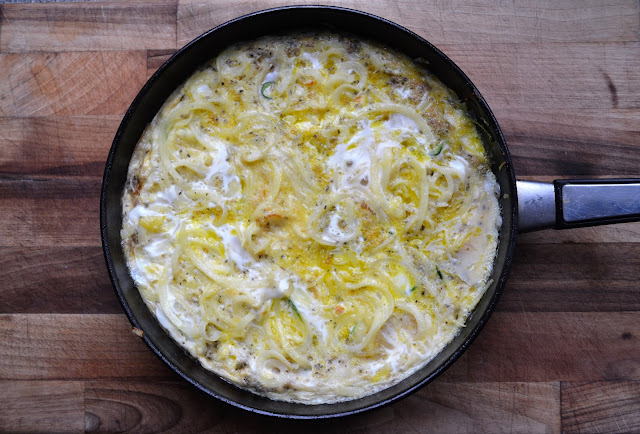 To finish, place your pepperoni on top and dot the spaces in between with mozzarella. Give it one last blast under the grill, until the meat crisps and the cheese bubbles up. 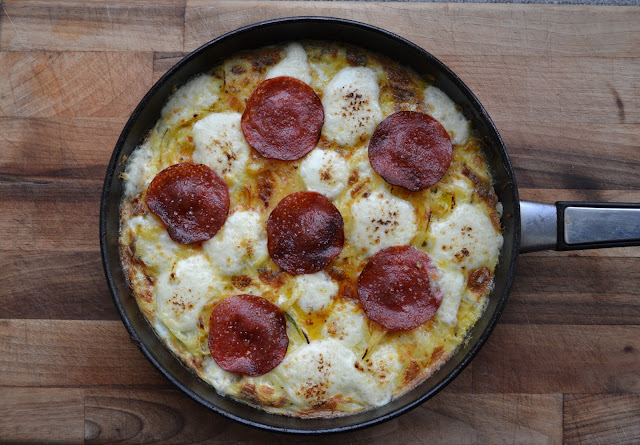 When done, leave to cool in the pan until warm and then flip out onto a board. You may need to run a spatula around the edges. Serve with salad leaves and tomatoes. Or chips. 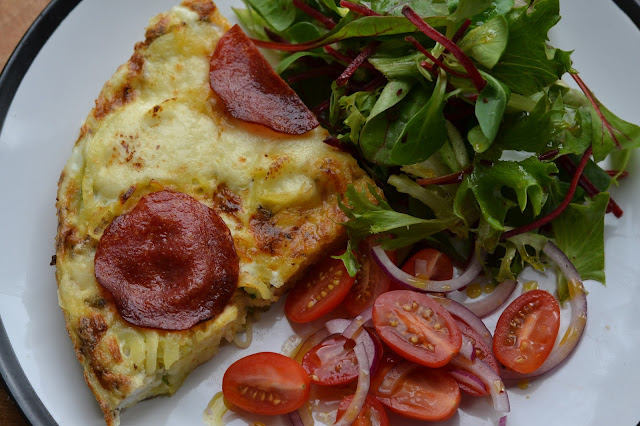 I have been known to buy the pre-spiralised bags of courgette for midweek courgetti and meatballs. Which is nicer than it sounds.
14 January 2017 at 15:46

Room for a radish said…
I used to work in a kitchen where they had a spiralizer, and they are a lot of fun - we used to make potato noodles and confit them in an oil bath. Delicious! Nice to see you using them to create something that's not part of a clean-eating January diet. We can't let the health fascists have all the fun kit after all...
16 January 2017 at 09:01

Food Urchin said…
Aaron - Thing is, I don't actually own a deep fryer. I usually resort to a pan and oil. But if I had one I would be deep frying potato noodles all the time.