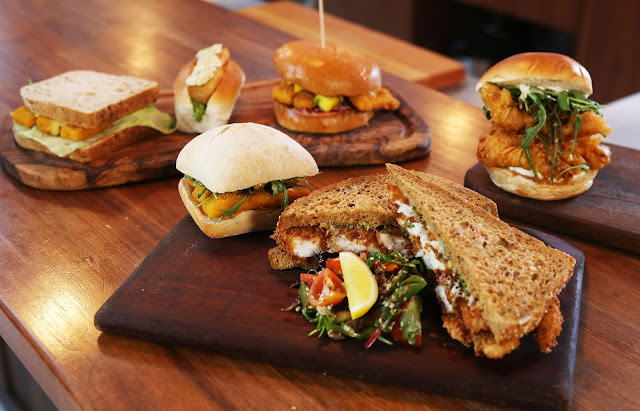 Given the amount of high profile, celebrity deaths that sadly happened in 2016, you'd be forgiven to think that there were hardly any heroes left. However, I am pleased to report that there is one salty old dog, who is still very much going. If I were to say - 'They make some fish fingers look like a right motley crew.' Or - 'I only choose the best for the Captain's table!' Depending on your age, you may well immediately start smiling, crying and nodding your head with fond memories of the infamous Captain Bird's Eye; who used to appear on our telly boxes, before savagely being made redundant in 2014. You know, that bushy, white-bearded, scallywag of the high seas, who used to press gang and exploit children by making them work endless hours on his ship; all in exchange for strips of flaky, white cod in crispy batter. What a monster! But we loved him. Because he gave us fish fingers! Served sumptuously on platters. And yes folks, he is still alive! I know this because I met him in person! At the Bird's Eye Fish Finger Sandwich Awards! My God! If it wasn't enough to be asked to serve as a judge, I also got to meet the Captain! He is baaaaack! He is back on the TV! With more fish fingers than he can humanly chuck at you! Oh happy days! Oh happy, happy days! 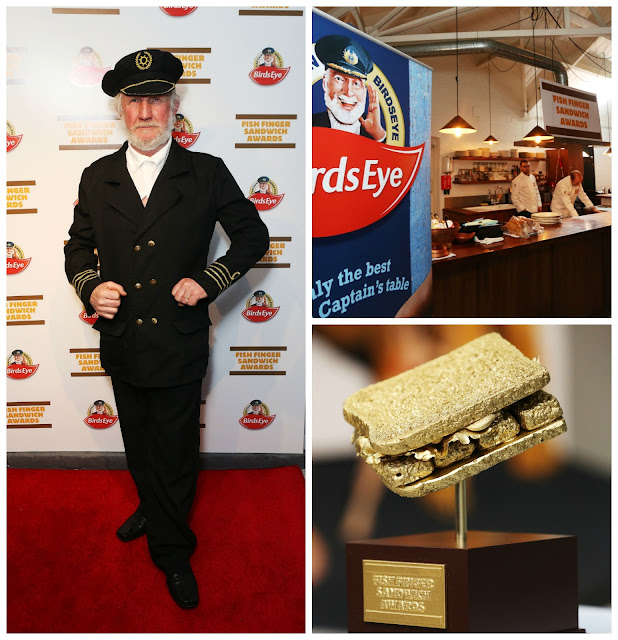 OK, please forget the delirium of that introduction. I have been feeling quite emotional of late. Which may be down to having to digest a huge amount of bread and breaded fish and a recent life decision to quit the 'day' job. Plus I am still reeling from the contents of Gregg Wallace's phone. But more about that later. The dust has settled, my mind is clear and now is the time to actually talk about the inaugural awards, recently held at the Tramshed, in Shoreditch; that fabled land of bushy beards.

As competitions go, it really was good fun and the remit was fairly simple. Bird's Eye simply wanted to find the best, most innovative and tasty fish finger sandwich. Launched on November 3rd of last year and over the course of 6 weeks, both members of the public and professionals from the catering industry were invited to submit their own creations via social meeja. From hundreds of entries, three finalists from each category were selected and they were then invited to the Tramshed, to take part in a cook-off in front of a panel of judges. That panel being food writer Xanthe Clay; Delicious Magazine food editor Jennifer Bedloe; Bird's Eye head chef Peter Lack; the incomparable Gregg Wallace; and me. The prize was spectacular. Instant fame through having the winning recipe featured on each pack of frozen fingers; a fish finger themed, gold sprayed trophy, mounted on laminated teak and (wait for it) a year's supply of fish fingers. You have to admit, it really doesn't get any better than that.

On the night, each finalist had just 15 minutes to prep their entry and then 15 minutes to cook and present their fish finger sandwich. I know what you are thinking. '30 minutes is more than enough to rustle up a decent sanger.' But believe me, it was quite intense in that kitchen. Trying to cook in a bustling room with cameras being shoved in your face is no mean feat. Add Mr Wallace's insistence to tell extremely bad Dad jokes throughout, is more than enough to put you off your stride. So with that in mind, everyone did very well. By way of a quick breakdown, what follows is an appraisal of each competitor, with witty and adroit analysis of their creation. 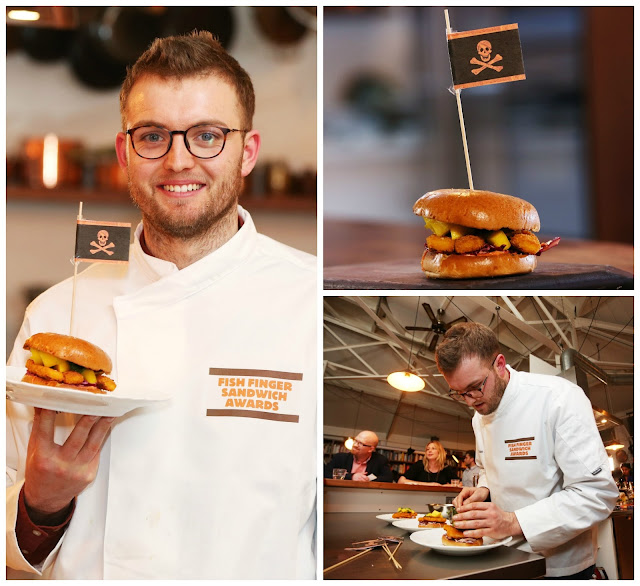 First up was Jonathan Foan. Or 'JJ' to his friends. Jumping out of the blocks, JJ hit the road running with his fish fingers with Cajun 'slaw, mango and avocado salsa, all served within a toasted brioche bun. This did raise eyebrows. Mango and fish? What fresh hell was this? Peter's eyelid certainly twitched at the description. However, it wasn't as bad as we all first thought. The sweetness of the salsa had thankfully been tempered by the heat of his shredded cabbage and it did all marry well with the crunchy fish finger. Messy but with good textures and it definitely was not inedible. JJ also had to be commended for making his own pirate flag. Yaaaar, that was a nice touch. 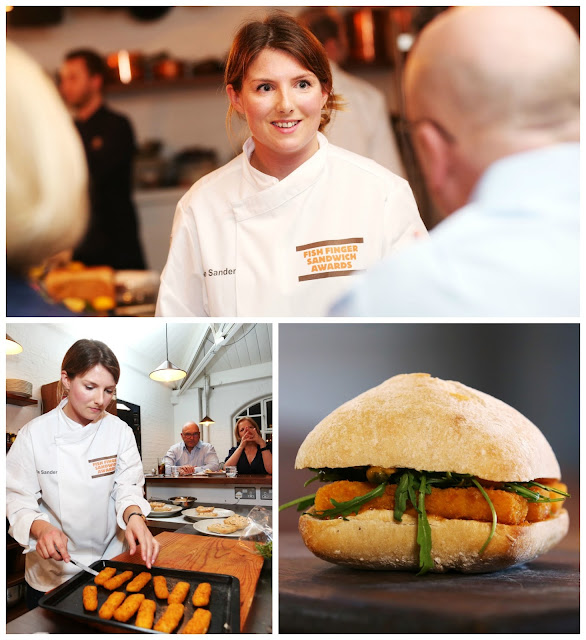 Next came Gabrielle Sander, bringing her fish fingers with mayonnaise, wasabi, lime, rocket and smoky paprika to the table, all housed with a crusty bap. Displaying a calmness under cross-examination, Gabrielle did very well with her execution, cooking her fish fingers to perfection, whilst answering questions on whether she was single or not. The baps were shop bought, which was a slight disappointment and her rocket could have done with a bit of tart dressing. But in terms of achieving a balance between tradition and innovation, Gabrielle was bang on the money. And to be fair, when you start sprinkling smoky paps about the place, that really is a string to your bow. 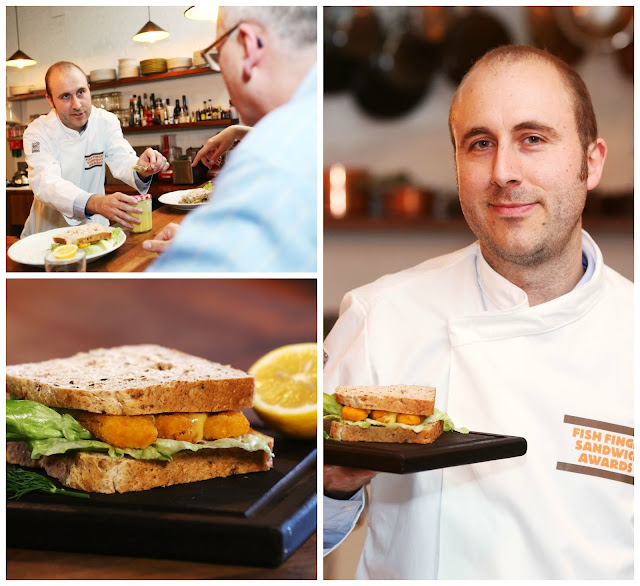 Final public chef, Greg Shaw, was perhaps the most nervous contestant of the lot, but the shakes soon settled down as he got to plating up his fish fingers with homemade lemon and dill mayonnaise, iceberg lettuce and wholemeal bread. A cosy and comfortable approach in other words. Maybe too comfortable. It's tricky because when it comes to a favourite sandwich, such as this one, sometimes all you want is the basics. Alas, Gregg didn't quite get this right. His iceberg, which must have cost a fortune at the time, was far too flaccid and his mayo didn't have that punch we were looking for. Jennifer, in particular, looked crestfallen after tasting it. And was this a sandwich screaming out for ketchup? I think so. 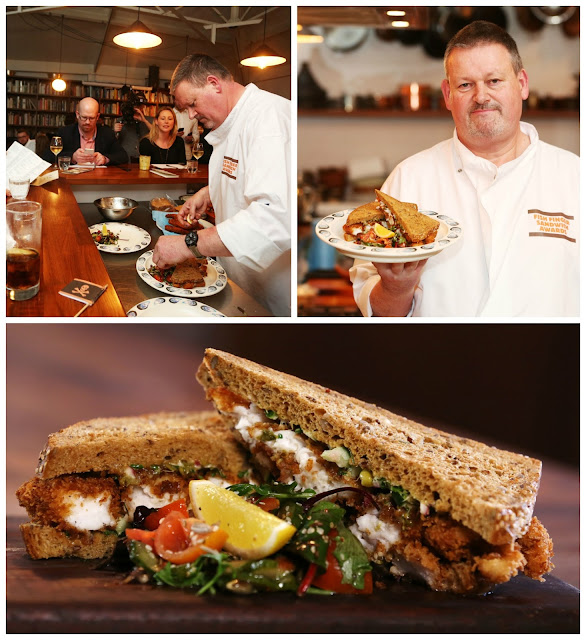 With the public round over, it was time for the pros to enter the ring and in stepped Chris Lanyon of Chapel Cafe, which is in Port Issac, Cornwall. A long way to come. Being chefs, they were allowed to make their own fish fingers, rather than use Bird's Eye and you might think that was an unfair advantage. But a lot can go wrong in that deep-fryer. I know when Chris plonked his huge goujons of Cornish hake, coated in panko, into the seething cauldron; as my eye wavered over the clock, I thought 'He better take them out soon, otherwise they're going to be burnt to buggery'. Chris knew what he was doing though, as the fish came out supremely succulent, with a great crisp shell. Slathered with his own tartar sauce, his sandwich was very special indeed. 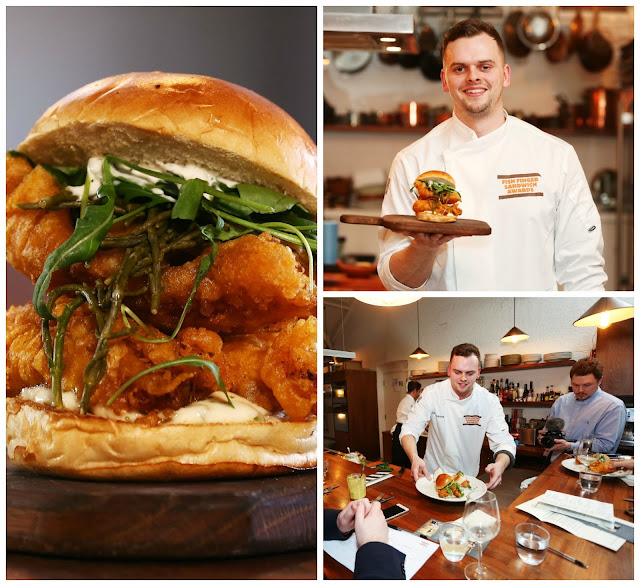 Being all pervasive, it was no surprise that a fish finger sandwich with a touch of street food nuance had made the grade and I had high hopes for Ewan Hutchinson's take. A Cajun haddock, in tempura batter, on brioche, with rocket, tartar sauce and pickled samphire; a sandwich that flies out of his Shrimp Wreck van. It was very good, especially his use of spiky sea vegetable. I really loved that. But the funny thing was this. Ewan had really served up a fish fillet sandwich, rather than a finger, and call us picky but that edged him out of proceedings I am afraid. When it comes down to winning, it is often down to the small margins. For me, serving up a huge whack of haddock pushed him just out of touch. 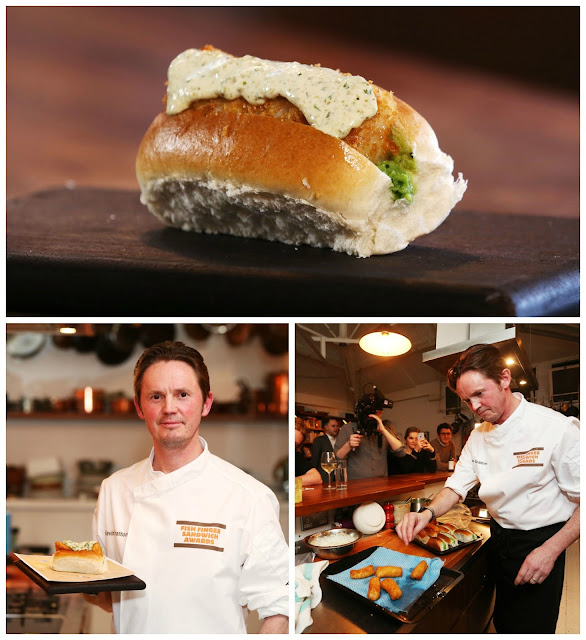 Last but no means least was Kevin Gratton, a man of pedigree, given that he is chef director of Hix restaurants and brains behind their festival and events outlet, Fish Dog. In terms of nailing a manageable bite, Kevin was bang on the brief. Serving up a finger of pollock, coated in panko, in a hot dog roll, on a bed of mushy peas, with a dollop of tartare on, it was delicate and pleasing and welcome relief in some ways. My belly had extended well beyond the buckle by this point. And hats off too, to Xanthe, who delivered the winning quote of the evening - 'This fish finger sandwich is the dog's pollocks.' One tiny issue though. The fish was just a touch on the cotton woolly side for my liking.

Once all the chefs had done their bit, to clamorous applause, it was then obviously time for the judges to retreat to the chamber, to compare notes and fight over who should be proclaimed champion. And reader, I would liked to have said that the deliberations took all night and delivered a scene littered with thick, bloody lips, torn shirts and smudged mascara. But to be honest, we were pretty much in agreement as to who the winners were from the off. I wish we had spent more time arguing. Because then we wouldn't have been treated to a half-hour montage of Gregg's life, via the thousands of photos on his phone. 'This is my flat in Docklands.' 'This is me with James Haskell.' 'This is what I looked like when I weighed 19 stone.' But you got to love him. He really is the best at what he does.

Rather string this out with a drum-roll affair (because hey, this news is well over month late now) I will come right out and say that the winners were Gabrielle Sanders and Chris Lanyon. The tension in the room prior to the announcement was palpable. Muted even. But I put that down to everyone being blinding by our compere's orange suit. So bright.

They were very much worthwhile champions though and no doubt their lives will change dramatically after this. Well, I like to think that it has meant an influx of customers to Chris' cafe, which is good for business. And I am sure that Gabrielle is getting accosted and badgered for autographs whenever she walks down the frozen food aisle in Londis. Actually, I hope not. God, what have we done?

Personally, I am just over the moon still that after all these years, I finally got to meet the Captain.

'I've bloody missed you, Captain Bird's Eye,' I shouted with joy, after grabbing a selfie with him. 'When are you going back out onto the open seas?'

'You what? I've never been to sea in my whole life. And the name is Bill by the way.'

'Yeah, Bill. I was over in the Wetherspoons, off Old Street, only a couple of hours ago. Couple of girls came in and asked if I wanted to earn some cash and stuck this poxy outfit on me. You wanna drink?'

'Yeah, I'll have a pint,' I replied, sagely. 'And let's grab a fish finger sandwich while we're at it.'

'Ooooh, I haven't had one of those in yaaaaaaars.' 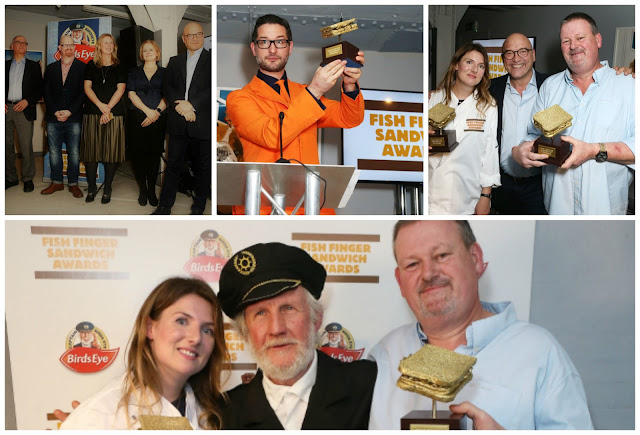 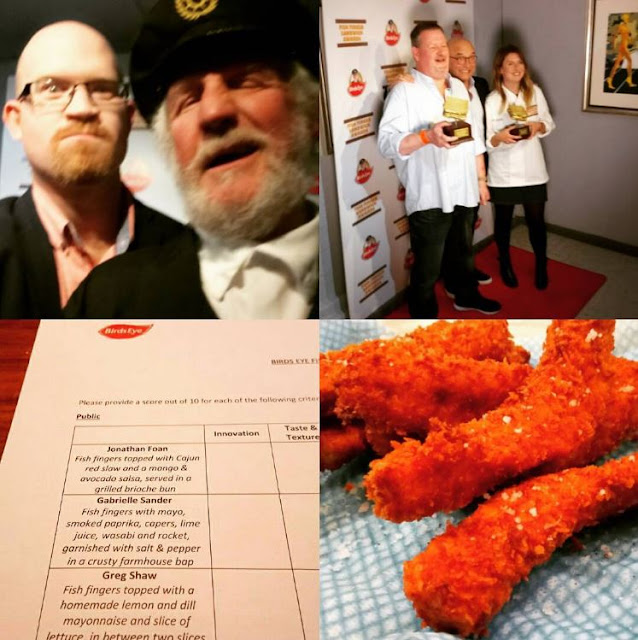