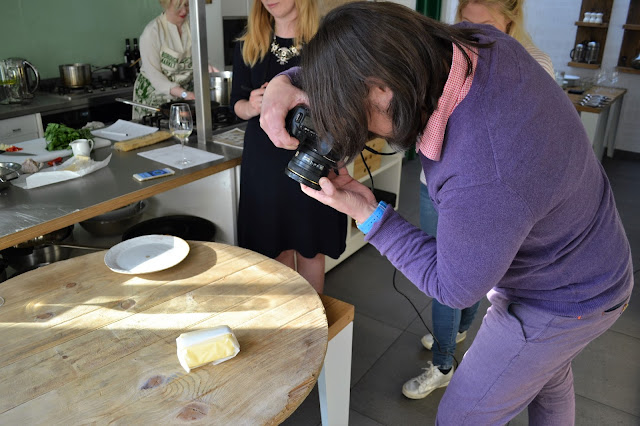 There is nothing like watching a grown man, all dressed in purple, taking a photo of a block of butter and feeling safe in the knowledge, that he knows exactly what he is doing. If I were given the task of doing the same, there is no doubt that I would spend a great deal of time, too much time, pontificating and reflecting upon my muse. You know, looking from different angles. Squaring up my fingers and thumbs. Eating a ham sandwich. That sort of stuff. So much so, that by the time I actually picked up the camera, there would probably be nothing but a puddle of yellow fat to snap; with a milky white residue on top, spilling out towards the edges.

Actually that sounds quite arty and could make for a decent shot. But that is not the point. A large degree of food photography is about being in the moment. To highlight the plain majesty of a dish or the simply beauty of an ingredient, all it takes is a degree of consideration, some thinking on your feet and a willingness to make the most of opportunities as they present themselves. Think about the natural light as it moves around you (not forgetting to switch off those kitchen spots) and juggle about with the composition, yes. Just don't think too hard. Just do it.

At least this is the kind of vibe I got from Borough Market's house photographer, John Holdship, when I attended a preview evening earlier this week, to showcase his residency in May. Over the course of the next four weeks, John will be in attendance in that well known food mecca in SE1 and on hand to help novices and keen photographers alike; to help improve their food photography skills, using both digital SLR and phone cameras. A sort of drop-in centre for those who are terrified of switching from automatic to manual, and for the Instagram generation too.

Personally, having had a run through with John, it was refreshing to see this onus on relaxing into things. I can get very tense whenever I am shooting pics. Partly due to a certain amount of dithering and not really knowing what I am doing. But largely because I usually have a table braying at me in the background, screaming 'Where's our food?' Of course, there is a bit more to it than this zen-like approach. Being able to dip into a toolbox of knowledge, accumulated from years of experience, obviously helps. Lest not we forget the plethora of software that is out there, to help enhance, tweak and manipulate. But like I said, it was a pleasure watching a professional go about his business and to grab some new tips and ideas along the way. And yes, I am buttering him up here, to make up for the snarky, sartorial comment at beginning of this post. (Don't worry John, I've got a similar pair of violet jeans in my cupboard, that I used to wear in the 90's, and still occasionally squeeze into.)

The added bonus of this class though, was getting to photograph and eat some lovely dishes prepared by food writer, historian and Borough Market Cookbook host, Angela Clutton. In keeping with the straightforward approach, she prepared a quick pasta dish of fettuccine with porcini, garlic and parsley and also made some trembling panna cotta, all rich and creamy and spiked with bay. Pasta, with all its beige inequity, is a demon to capture and jazz up for the camera. However, with careful positioning and some resulting shadowing, we all managed to get some rather sexy shots. I did have to smile when Angela interjected halfway through our snapping, with a bottle of olive oil to enliven and spritz our tiring plates up a touch. 'Another trick of the trade,' she winked. Which says to me, that no matter how fast you work, there will always be a degree of fixing in food photography.

Still, that really is the name of the game and I have no doubt that if you were to pop down to Borough Market over the next few weeks, John, Angela and co will be able to help you add a few more weapons to your photographic arsenal.

The first session starts next Thursday, 4th May, between 12:30 and 2pm, where John will be working with Masterchef finalist, Tony Rudd, and paying homage to home grown asparagus.

For further information, go to the Borough Market website here.