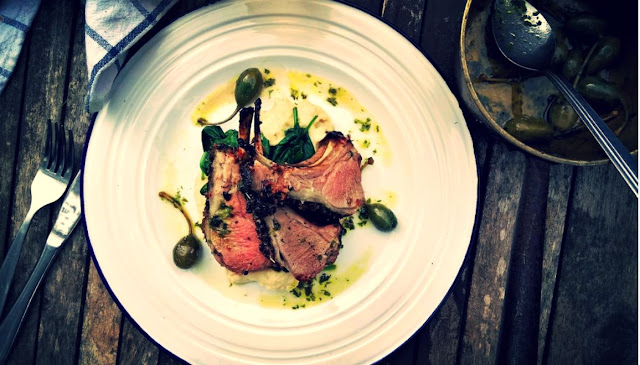 Given that I have now the steered the ship of approximately 2381 barbecues, you'd think that I would be quite the veteran or expert by now, wouldn't you? Well, yes, I am. Let's make no bones about this. Having spent a large part of my formative years hunched over disposable trays, I have since dabbled in a vast array of techniques, tempering (or tampering rather) with heat and fire, in the great outdoors. Underground, overground, wombling free. Smoking, choking and inadvertently setting my neighbours fence alight. Rotisserie, patisserie and lest we forget, deep frying whole potatoes in a bubbling cauldron of beef dripping, over naked flame. An episode that still fills me with horror because seriously, if there had been just the slightest of nudges, from say, an itinerant foot; we would have been in big, big trouble. We filled that pot up with so much fat that day. Too much fat. I blame John.

You're probably getting the picture by now, that perhaps I am not quite the expert. I still have much to learn. Largely about safety. But I really do love to cook outside. It really is joyous and as such, I am always looking around and thinking of different ways to do things. Or for new adventures, as it were.

One project that has been on my mind for some time now, has been to cook an entire meal on charcoal. At this point, you may be thinking 'Oh, here we go, Danny is going to be selling himself as the next Niklas Ensktrak...Extra....Einstein...that beardy, chef bloke from Sweden.' I am not. I do love Niklas' book though and am in awe of the stuff he does but he is operating in another universe. By comparison, I'd have to start off from a very small leaping point. Well, relatively low.

So the other day, I cracked out both my ProQ and a galvanized tray (from an old portable piece of kit) and set to creating a meal, with an Easter vibe, some punchy flavour and all cooked over glowing white coals.

Lamb obviously had to be the star of the show and on this occasion, I returned to Iceland. Again, I know what you are thinking. 'Oh, here we go, Danny is back on the sell.' But my cynical heart really has been melted by some of the offerings in that store and as such, Iceland is now on my 'go to' list. Admittedly, that list is very large anyway. Growing in fact, as I am a bit of a food shopping, male strumpet. But I suppose what I like most about Iceland though, is the benefit of reaching into those laden freezers and pulling out some ingredient that is out of the ordinary. Octopus, red snapper, smoked duck wings, frutti de mare, rose veal saltimboca, even croquembouche kits. For when you want stuff your bouche with choux pastry, chocolate and caramel. Like you often do. (Yes, I know you do).

It's amazing to have access to stuff like that on the high street, to picked up conveniently and the quality is surprisingly good. Compliment that with an array of frozen vegetables and fruit, for nutritious sides and healthy breakfasts (the kids love a dollop of red berry compote in their otherwise mundane porridge) and suddenly, Iceland doesn't look too shabby.

More interesting for me though is the phenomenon of feigned surprise and subsequent embarrassment whenever I bump into someone in there. The sort of thing that was once reserved for shopping in those now very popular Germanic stores.

'Oh, hello. I don't normally come in here you know but the frozen fish is really quite...commendable!' they'll often say. Using words that don't quite fit their regular vocabulary, before scuttling off down the aisle, hoping that I haven't seen the stack of stuffed crust pizza at the bottom of their trolley.

Still, the tide definitely seems to be turning for Iceland.

Coming back to the task in hand though and the element of cooking a whole meal over flame, I kept things simple for my first time out. The aforementioned lamb, sourced from British Red Tractor assured farms, was all pretty much taken care of, as it came with an even crust of parsley, breadcrumb and shallot. I just had to make sure that my ProQ was up to speed with the temperature for some indirect cooking. Of course, cooking the lamb this way also injected a lovely touch of smoke and if you fancy doing something similar, I would err on going for 30 minutes (rather than the 35 on the instructions) to keep a touch of pinkness.

The trickier part is perhaps pulling together the yeasted cauliflower, to provide a rough puree or bed of umami. However, this only requires a small degree of patience. It was quite relaxing actually, stirring the small florets into butter and watching them soften and break down, whilst contemplating the wild garlic nearby. That is slowly taking over my garden, house, life. I acquired this method for cooking cauliflower from Jackson Boxer of Brunswick House by the way. It really is gorgeous to eat, alone or otherwise, and definitely gives that cheesy cousin a run for its money.

Wilting some fresh spinach and quickly frying off some caper berries on some hot coals is, OK, a bit of a no-brainer but once everything was on the go and coming neatly towards the end, I don't mind admitting to standing back and feeling proud about my first attempt at al fresco cuisine au total. A tear even dropped onto my cheek, dispelling any notions of proper caveman cooking. Real barbecuing men don't cry, they just sport ridiculous looking clothes. Yet when I shouted out to the kitchen inside, where the gang (including our nephew, Bo) were assembling one of those rather naughty croquembouches I mentioned earlier, to come and have a look at what I had done, not one person beckoned to my call. They were all too busy sucking up left over caramel, straight from a piping bag. Including Mrs FU. In essence, they couldn't give a monkeys about my exploits in the open air. This assembly of a fantastic meal, conjured magically upon wood and fire. Next to the wild, wild garlic.

It was only then that I really got upset. 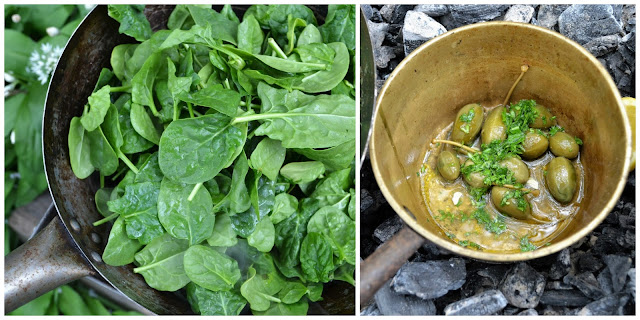 First, a quick addendum. Given that I have employed two methods here i.e. indirect cooking and open grilling, it is obviously going to be hard to do this all on one bbq, especially if you don't have ProQ or Weber or any sort of bbq with a lid. If so, slam that lamb into the oven but do carry on with the vegetables on the grill. Or if you do have a bbq with a lid, live a little and build a makeshift one just next to it. It's not that hard.

Now, to start, you need to fire up your bbq's and I am not going to tell you exactly how because that might be like telling your Grandma how to suck eggs. But essentially, you need your bbq for the indirect cooking to reach 180C and the coals on your open grill to be glowing white before cooking.

So, place your lamb, crust side up and place it into your bbq. (Remember, 35 minutes as per instruction, or 30 for medium).

Next, place a wide saucepan on the coals and add the butter. Once it starts foaming (and it will) add the cauliflower, yeast and a touch of salt. Briskly stir fry so that everything gets coated and then leave, giving another stir every now and then, to prevent it catching too much.

After about 20 minutes, the florets should be quite soft and begin to turn to mush. Encourage this by pressing down with the spoon and continue to brown things off for another 5 minutes or so.

Then add the milk and incorporate together and then using a masher, mash it all together to form a rough puree. Or mash! Ha! You could go the extra mile and blitz with hand blender but quite frankly, getting the extension lead out would be going too far. Even for this project. Taste for seasoning and keep warm.

Using another wide saucepan or wok, place that on the coals, along with a smaller saucepan. Add the washed spinach to the wok and oil and caper berries to the small pan.

By now, your lamb should be done, so take that out of the bbq and cover with foil and leave to rest.

Finish by wilting the spinach down and turn the caper berries over so that they crisp up a little, then add the lemon juice and parsley to the capers and stir through.

To serve up, spoon a generous amount of the cauliflower into the centre of a plate and top with some spinach, making sure you squeeze out any excess liquid first.

Carve and portion up the lamb cutlets and arrange of top of that and finish by dotting some caper berries around the plate and drizzle over some of that citrus and herb oil.