Buying a whole piece of oxtail takes a certain degree of bravery. Largely because it looks like a tail and if you share the same past experience as me, you will know that once you've got it home, you haven't got a chance in hell of cutting it up into smaller pieces. Yes, once upon a time, I foolishly declined an offer from a butcher to chop up some oxtail for me. Because I was so entranced by its undiminished state.

'Is that what oxtail looks like whole?' I asked.

'Yes but we can cut it to order. Do you want some pieces then?'

Of course, I then got it home without any real clue of knowing what I was doing and so decided:

'You know what? I think I will cut this up for a stew.'

Given the small amount of kitchen equipment I had back then, the task proved impossible. My chef's knife was blunted in seconds. No amount of whittling and probing with a paring knife into the crevasses of the cartilage would do the trick. In a final, desperate attempt, I ran to the shed in the garden and grabbed a hacksaw and as I came bombing back into the kitchen, holding it manically aloft, Mrs FU suddenly grabbed me the wrist and said: 'No. You are not using that.'

Considering that the blade was encrusted with rust, it was probably a good idea that she intervened.

So, there was nothing for it but to stick the damn thing in the oven and roast it. And that didn't quite work either. We ended up picking off hard baked strips of beef from bone under candlelight. What a sullen evening that turned out to be.

But the good news is that you can cook oxtail whole, if you fancied it. With some thought, care and attention, this frugal piece, usually reserved for unctuous winter stews, can become something quite spectacular and worthy of a banquet. And if you can get your hands on some Trotter Gear, to throw into the mix, then you will enter another parallel dimension altogether.

I first spotted TG in Turner and George, again falling under the spell of spying something different and unusual. A packet of viscous...stuff on the shelf, that not only promised wonders for your stocks, braises and stews; but also promised to become your friend. I've used it since in a pig cheek and leek stew, which warmed the cockles on a particularly grey January day. Savoured it with duck, carrots and peas and far too much wine. And after hearing the suggestion from good authority, I have also tried it smothered on toast, after a giving it quick blast in the saucepan. It knocks bread and dripping out of the park.

Using it then in a liquor for slow braising oxtail comes as a no-brainer and to be honest, this sort of dish has St John written all over it. The inspiration comes from the original Tom Pemberton's recipe in Coco after all. Except in this instance, I braised for longer, popped a couple of star anise for good measure and of course, used Trotter Gear. Which wasn't invented back then.

The best part comes from picking the soft pieces of beef from the bone, full of that familiar rich flavour. Scoop some creamy mash into your bowl, bolster by adding some sweet carrots and shallots, drizzle over some of that glorious gravy, and I promise you, you will be in seventh heaven.

Sadly, I did get any decent photos of my final plate. And to be honest, the ones I took of the whole oxtail are a bit blurry.

But you've probably cottoned on by now, that I am the sort of bloke who has a tendency to rush into things. Especially towards the end. 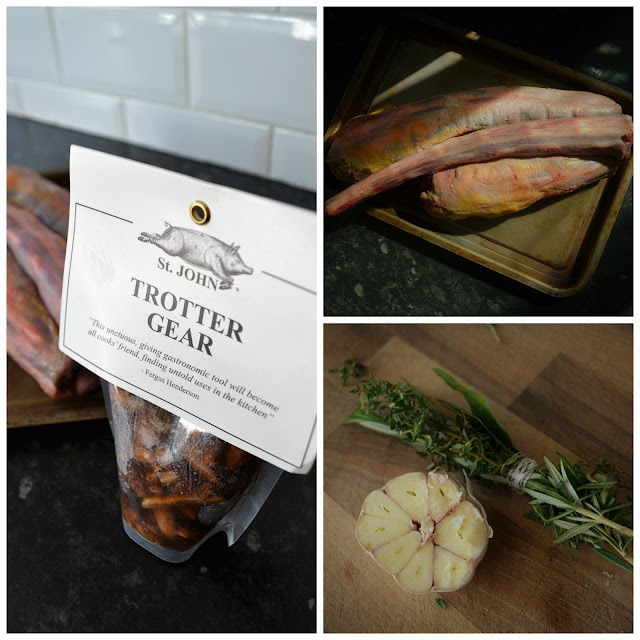 1 whole oxtail (Although you will see in the photos I've used one and a half, to also feed the kids)
10 banana shallots, peeled and left whole
20 large Chantenay carrots, scrubbed and cleaned
1 whole garlic, cut in half
1 bouquet garni, using rosemary, thyme and bay
2 star anise
1 bottle of red wine
1 litre of beef stock
1 packet of Trotter Gear
Splash of balsamic vinegar
Salt and cracked black pepper
Oil, for frying 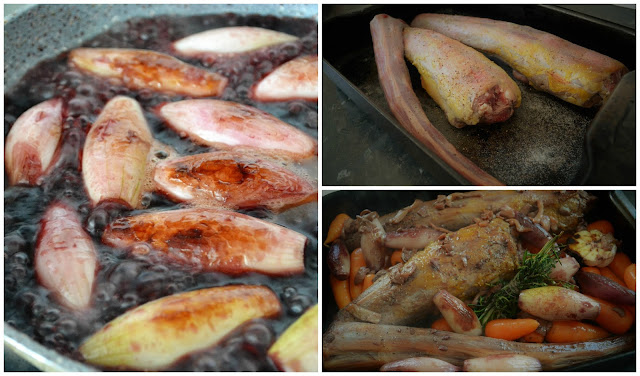 First heat your oven to 160C and season the oxtail all over with a good dusting of salt and pepper.

Place a roasting tray on top of the hob over a medium to high heat and add a splash of oil. Then place the oxtail in and brown all over and then remove from the heat

Using a large frying pan or wide pan saucepan, add another splash of oil and place on the hob over a medium to high heat. Add the shallots and briskly fry, until browned all over and then add a generous splash of balsamic vinegar and reduce until sticky.

Then pour in the red wine, the stock and Trotter Gear and reduce by a third. Add the carrots, bouquet garni, garlic head and star anise and cook for another 5 minutes and then pour the braising liquor all over the oxtail. You will need to nudge and poke the vegetables into all the nooks and crannies.

Cover the roasting tray with a double layer of strong foil and seal all around. Place into the oven and cook for 4 to 5 hours, until meat is starting to peel off.

Take the tray out of the oven and remove the vegetables and resulting gravy and keep warm and just pop the oxtail back in to gently brown off for another 20 minutes.

Serve on a platter with the carrots, shallots and rich gravy, along with plenty of mashed potato. 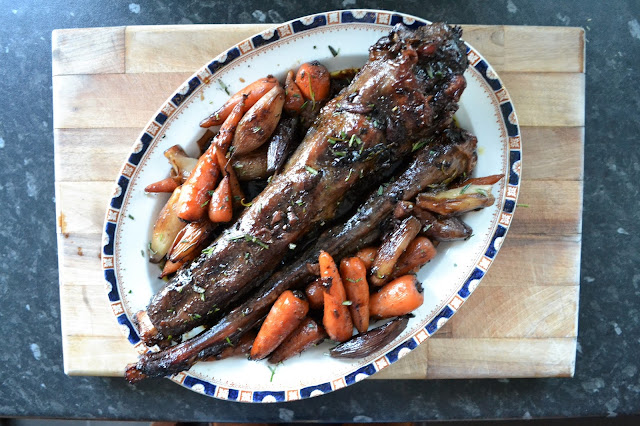