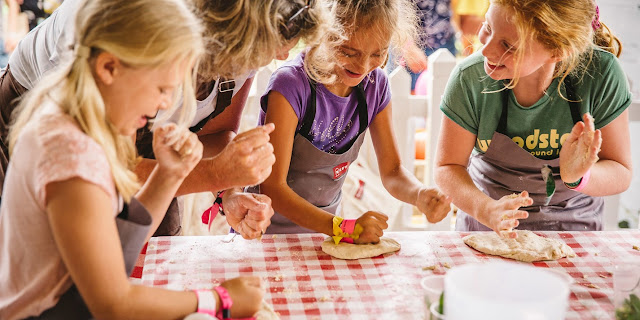 Trying to pick out a short but comprehensive list of the top food festivals in the UK is, believe me, no easy task. I don’t think I can remember a time when there has been so much choice and diversity. For instance, up and down the land, you can now search and find festivals purely dedicated to chilli, garlic or oysters. Sumptuous Michelin-starred banquets, set in castle grounds and on country estates, are now two-a-penny. Offerings of the serious and highbrow sit quite nicely alongside rambunctious family-led affairs, where you can pick up an excellent variety of street food along with the standard pints of heady cider. The sort served by a grinning West Country bearded wizard; cloudy and resplendent, with curious matter and twigs floating on top.

Yet to my mind, the words ‘food’ and ‘festival’ have not always been synonymous with each other. I can recall one Glastonbury where it bucketed with rain the entire time and I singularly breakfasted, lunched and dined from just one food truck. Simply because it was the closest to my tent. It just sold minced beef pies and mushy peas and during the whole weekend, that was all I ate. It altered my perception of ‘festival food’ for a long time. However, I’ve come a long, long way since then. And nowadays, I always remember to pack my Pac-a-Mac.

Like I said, this isn’t the definitive article by any means. But if I were to go a-wandering around the country, looking for adventures in food, good conversation, loud music and a mouth-watering experience, these festivals (some small, some big) would definitely feature among my pit stops along the way.

Billed as the ‘original and best restaurant festival’ and set in Regent’s Park, Taste of London really does give you an excellent opportunity to sample a vast array of food from forty of the top chefs in the capital, such as Neil Rankin, Nathan Outlaw and Thomasina Miers. With over 160 taster-sized portions of signature dishes to choose from, comfortable clothing is a must. Although being in London, there is the propensity to glam up and as such – I have seen a fair few high heels go sinking into the grass. It is a bit spendy and if you are anything like me, those crowns will go flying out of your pocket. But if you are the type who likes to save up for a special meal a few times a year, it is well worth splurging out for a broader experience and to enjoy a glass of fizz (or two).

This is a food festival that is slightly unusual in that it runs for a whole month, with tours, events and experiences popping in various places across the sprawling county of Hampshire. Whilst spending a month zooming around country lanes to scoff canapés made by MasterChef winner Jane Devonshire or sipping gin at the Winchester Distillery is perhaps not practical, the appeal of this festival is that it really does showcase the best of the region and shines a light on the rich food culture. Key dates for me to hit the road are for the Broughton farm tour (1 July), to learn more about their delicious and sustainable water buffalo, and crossing the Solent for some garlic-based shenanigans at the The Garlic Farm on 12 July.

From little acorns do mighty oaks grow and it’s good to see GRUB, a street food collective based in Manchester, is making sure that vegetarians and vegans are well catered for at every event they put on. So much so, they’ve now begun to curate a programme of entirely vegan one-day festivals, held every quarter. Steering away from the ‘Comicon’ vibe that ordinarily overhangs similar initiatives, the main drive is to simply provide a warm atmosphere with good music and beer, and to show that going veggie or vegan doesn't mean you can't eat amazing, exciting food of all kinds. With the likes of Club Mexicana, Wholesome Junkies and Fat Annies on board, it’s easy to see why they get 1,300 people coming through the door.

OK, I am a bit biased with this one, as this festival is held in God’s Own Country and is not too far from where I live. But having seen it grow and grow over the years, I can’t help but feel a small tinge of pride, that Essex is beginning to put its own stamp on the food map. Held in the historic grounds of Cressing Temple, around 140 local artisan producers, brewers and traders all pitch up and set out their wares for people to buy and sample. With cookery classes for kids on offer, along with music and a variety of demos, food stalls and bars, it all amounts to quite a party atmosphere. The big draw this year will be the celebrity chef demos, with James Martin, Nadiya Hussain and Gizzi Erskine in the house. Not forgetting the Galvin brothers, who will be giving the lowdown on some special barbecue recipes. Bangin’ in other words.

Having already mentioned Glasto, if you want a food festival that’s as committed to bringing a similar level of ambition it would have to be the Big Feastival. And alright, on a scale, it doesn’t come close to Worthy Farm, but the overall programme is still quite impressive. Especially if you are into music AND food. Faithless, De La Soul and old indie band faves, Dodgy, tick my boxes. But I suppose it’s on the culinary timetable where things are really happening, as the likes of José Pizarro, Olia Hercules and Robin Gill are on board to deliver their particular brand of magic. The street food offering is also very exciting too, with Breddos Tacos and Smokestak featuring. All down of course, to Blur bass player and cheesemonger Alex James, hosting the event on his vast grounds.

Now in its fifth year, this cornucopia (or carnacopia?) of meat cooking, fire and beer is back at Tobacco Dock and if you haven’t got a ticket yet, you best get on board. With a focus on ethically sourced meat, as well as wood and charcoal, the atmosphere is usually intensely smoky, where beards and tattoos are de rigueur. But in all fairness, a strong sense of fun and carnival is found in abundance around the old dock, where live musicians wander around, encouraging people to dance as they wolf down a burger, a rack of ribs or an entire leg. Family friendly in other words and with a keen global presence, as chefs from around the world will be jetting in to show how they cook their meat. Although it is not all about the flesh; Yotam Ottolenghi will be demonstrating how to get the best out of vegetables, using flame and his encyclopaedic knowledge.

The oldest and regarded by many as the best food festival on the calendar, Abergavenny has been going strong for nearly eighteen years. Which is not bad going for an event that was started by two local farmers in response to the BSE crisis in 1999, to reinstall confidence in British produce. As a torchbearer, this festival has probably done more than most to kickstart and engage conversation around food in this country. But that is not to say that things are all morose, serious and dry in the small Welsh town where it’s held. Far from it. After all, as autumn descends, around 30,000 people usually turn up to eat, drink and laugh their way around the winding streets. And with the added bonus of the talks and debates held there, the crowd also learns a thing or two.

As the skies begin to grow darker early, thoughts of festival going and eating and frolicking in the great outdoors tend to disappear. Thankfully, out in Norfolk, there is one last chance to join a pig-themed hoo-hah called Porkstock. It’s a place where wellies are a must for breakdancing, sausage-eating champions are born and a lot of money gets raised for a charity called Nelson’s Journey, which is a notable and refreshing incentive for holding a food festival in the first place. Again, this is another small affair but it receives great support from local producers, musicians and artists. Plus, there are some great demos to catch by chefs Charlie Hodson, Mark Poynton, Alan Paton and the incomparable Hardeep Singh Kohli. Then in the evening, when the stars come out, that’s when it really gets loud and exuberant and all the body popping starts. A fitting way then, to end the festival year. With a bang and not a whimper.